Putting together quick effects patches in Guitar Rig couldn't be simpler. It also has some great tools for creating rhythmic patches that can be added to pretty much anything. In this quick tutorial I'll show you how to do exactly that.

I'll use Massive for this. It's a dead simple patch as most of the work will be done by Guitar Rig. It's basically two Saw waves an octave apart. I've added some unison pitch spread in the 'Voicing' tab. 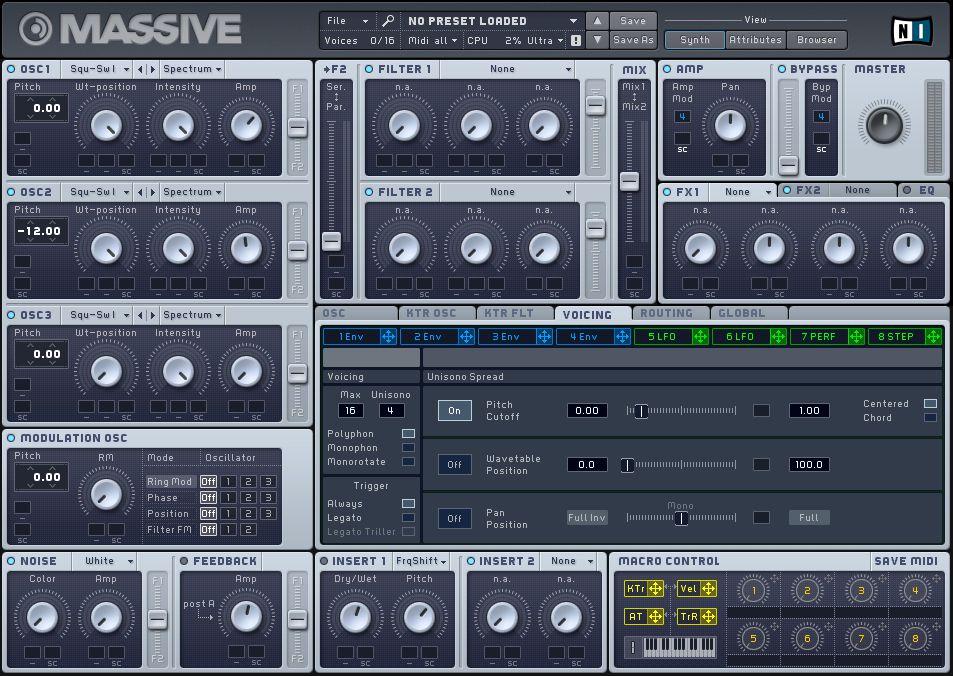 I've also reduced the level of 'Attack' in the amp envelope (Env 4) to reduce any clipping.

Load up a Guitar Rig on your channel.

Tip: If you're using a stereo sound make sure you enable both the Left and Right inputs on Guitar Rig at the top.

From the 'Dynamics' section in the 'Components' browser load in a Volume Pedal and a Step Sequencer from the 'Modifier' section.

Set the Volume Pedal at half and drag the 'Assign' icon from the Sequencer onto the volume node. Open the extra parameters and make sure the assign amount is at full. 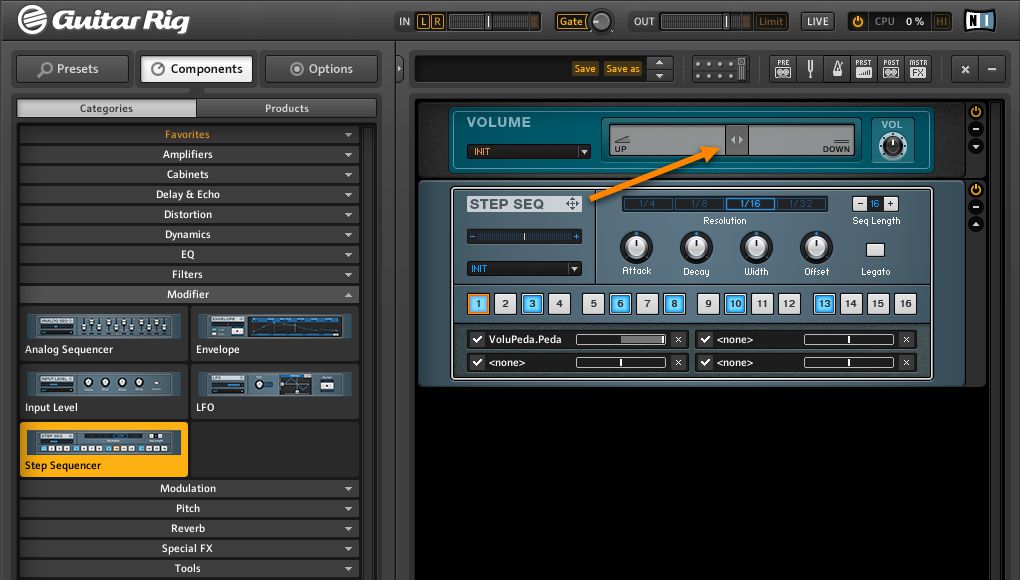 I've put in a sequence that I like by turning on some steps.

First I'll add a Phaser 9 from the 'Modulation' section to add some movement. Set the Rotate and Mix to full. I've set everything else pretty subtle. 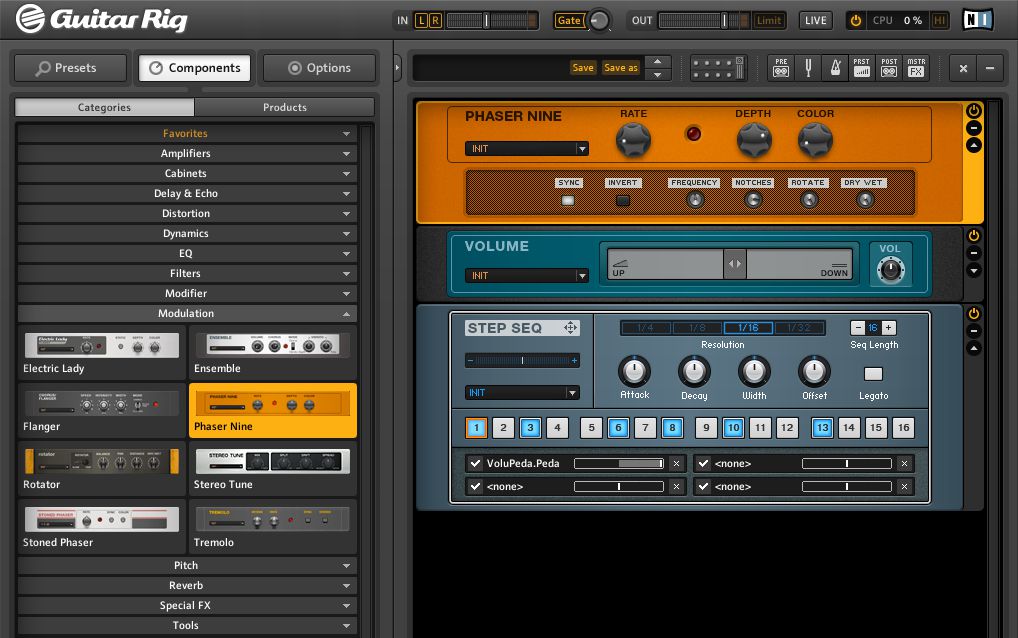 Now I'll add a VC 160 from the 'Dynamics' section for a bit of compression to taste. This compressor is great for adding some sharp attack to the sound. 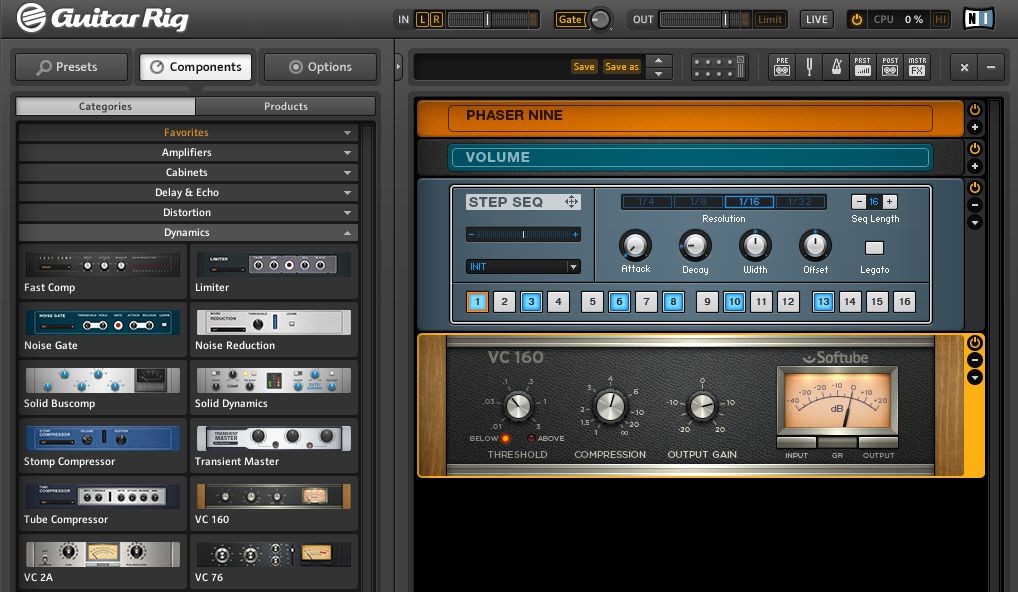 Here's what I have now.

Next I'll add a Pro-Filter from the 'Filter' section and an LFO from the 'Modifier' section. Assign the LFO to the Cutoff knob and tweak to taste using the 'Cutoff' knob and 'Assign' amount in the LFO additional parameters. 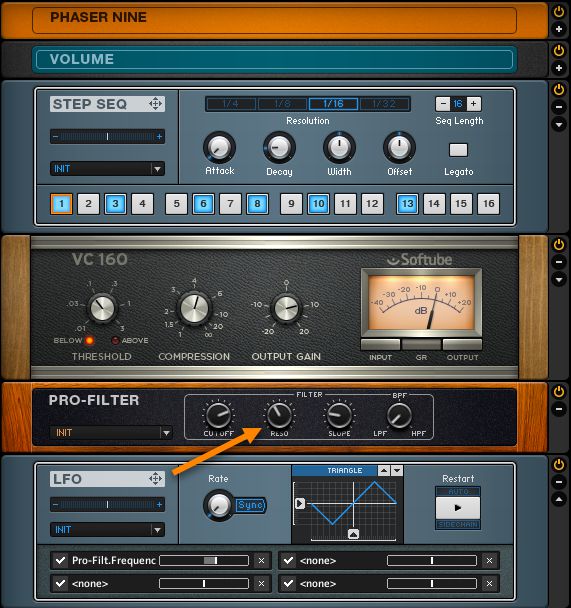 Now I have this.

Now I'll just add a copious amount of Tape Delay and reverb from Little Reflektor. The Tape Delay settings are standard (8th and 4th) and I've bought up the Echo volume and set the Stereo control to 100% in the extra parameters.

The Reverb is XXL on the B setting with some High Cut. 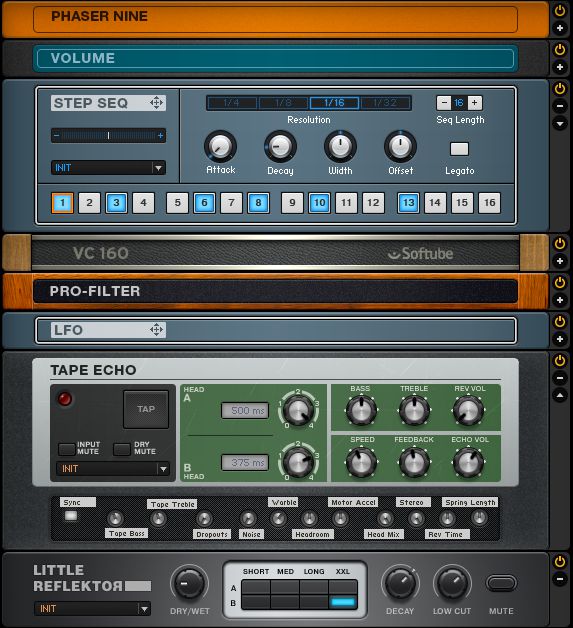 The Step Sequencer is cool as it has an envelope control for the steps. Playing with the Decay and Width controls can give you a nice range of sounds from super tight to open sustain.

This effect took about two minutes to set up and you could take it a lot further if you want. Guitar Rig has so much to offer in the way of effects and its Modifiers can really help in adding rhythm and movement to parameters.

Have fun making your own!