Language
Looking to make a great sounding lead guitar from a synth? Bring on Reason, and more to the point, bring on Parsec. G. W. Childs shows how to twist this synth's sounds into convincing lead guitar.

If you haven't spent much time with Parsec, in Reason, yet, you're really missing out. Parsec is one of those synths that can cover almost any type of patch you could ever think of, and almost make it sound real. Recently, I've been using Parsec for some pretty convincing lead guitar, and thought I'd share with you how I'm doing it!

First, to start off, let's reset the Parsec patch to the initialized patch, by right clicking on Parsec and choosing Reset Device. 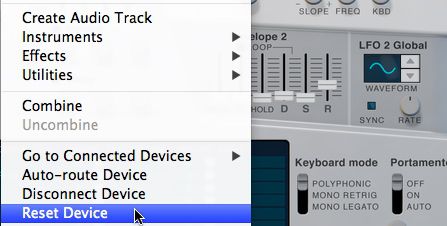 One thing to know about Parsec is that it has several Generators types. Sort of like how Thor has different Oscillator types. It's the same thing, generator, oscillator, they both generate, or oscillate sound. I'll select the Dual Saw Generator for Generator A.

Now, I'm going to crank the Detune of the Dual Saw Generator all the way up to 100%. This will initially sound more like an 8-bit sound. But, bare with me! We're adding effects and the extra detuning will really cause the guitar to sound huge, later.

We'll also want to add Generator B. Usually, when creating an electric guitar patch, there's a bit of a sawtooth, and a little bit of a square. By default, Generator B is off. So, we'll need to enable it, by selecting the small, blue button, next to the Sound Engine B heading. 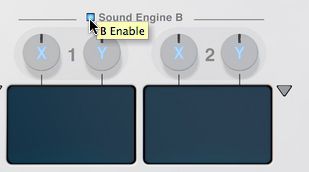 By enabling Sound Engine B, we also enable Generator B. Now, we can select a Pulse generator, which will act as a more rounded, square wave shape for us. But, just to blend it with the Sawtooth a little better, I'll raise the phase to 25%. Now, it sounds even more robotic and electronic. But, this is all about to change, once we start sculpting with the filter and the envelope.

Alright, now we need to eliminate the current, endless, electronic drone that occurs when I press a key down. This guitar needs more of a pluck! I'll use Parsec's Amp envelope to tighten things up a bit. By raising the gain to 6.4, I'll get a much stronger output, which is always a good thing when trying to recreate rock guitars with a synth. Then, I'll lower the sustain all the way down to 0, and lower the decay down to 1.70s. This will give us plenty of audio when a key is held. But, in keeping with the physics of a real guitar, it will eventually fade away. Finally, I'll give the release 2.0 ms. This will give a hint of dissonance between notes, and when we add distortion, we'll really hear the harmonics in the release.

Now that the timbre is dialed in, and we have recreated some of the guitar action and handling with the Amp Envelope, let's sculpt the overall tone, using the Filter of Sound A, as well as some thickening effects. I'll place the High Pass 24 filter on to the second slot of Generator A, and raise the Frequency, or X knob all the way down to 28%. This will cut off a lot of the low end that we really don't need for a lead. And, I can raise the filter resonance, using the Y knob to push that cutoff frequency (84%), which will be key when we bring in some distortion.

I'll also add some Ensemble modules on to Slot 1 for both Sound Engine A and B. Except, Sound Engine B will get an Ensemble 2 module. These modules really make a thin patch sound much thicker, by slightly detuning voices within the generators. I'll set both X, or Detune knobs for both Ensembles (1 & 2) to 23%, giving us an ample amount of thickness. Though, I'll adjust the Start (Y) on Module 1, of Sound Engine A to 20%, and set the Threshold (Y) of Module 1 of Sound Engine B to 61%. Alright, it's bigger, it's badder. But, it still doesn't sound much like a guitar. This is okay, because ultimately, through the effects, we're going to sculpt the remainder of our heavy metal attempt.

Now, we need some effects.

I'll enable the Reverb of Parsec, and lower the Damp knob down to 0. I'll also increase the Size, slightly to 64%. By turning on the Reverb, it is my hope to build up the 'body' of the guitar. Granted, an electric wouldn't be too hollow, but who said we can't distort a dreadnaught on a concert stage? I'll also pull the level down to 44%, just so our axe doesn't sound like it's too hollow. 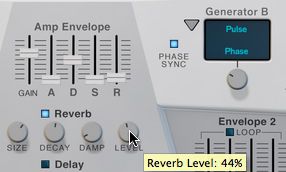 I'll also enable the Delay, in order to gain that U2/Edge sort of feel to my guitar, with a slight bit of echo. The only tweak needed is here is simply pulling back some of the delay, by adjusting the level down to 15%. This is just enough to up the complexity of any arpeggiated parts. And, if it gets in the way, we can always turn it off, right?

Alright, here's where things get fun. But, in order to get what we need, we'll need to look for a little help of the old, distortion workhorse of Reason, Scream. I'll drag a Scream module in, right below Parsec, and set it to Fuzz. 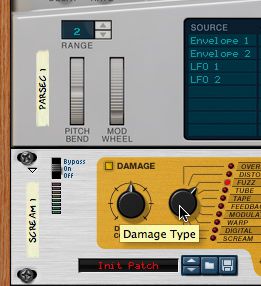 Now, we have power. But, let's shape it, a little. I'll adjust the Contour knob to 76 and the Bias up to 72% to open up the effect a little.

I'll also enable the Cut section of Scream and kill the Lo end down to -35, and crank the Mid up to 28. By boosting the midrange, we can recreate some of those old, grungy amps, and get some reality in here. Oh, and give it just a hair of the Hi slider at 9, just so there's a little something up front.

And, lastly, and one of the more crucial elements—The Body. I'll enable the Body and switch the Type out from A to C, but I would experiment here. You can get a whole slew of cool, classic sounds. I'll lower the Body Resonance down to 30%, this will keep things from getting too noisy, and possibly 'synthy', when we crank the other parameters. Just to liven things up, let's raise the Scale to 100, and the Body Auto to 101. The Body section, especially with these settings will act almost like an additional Filter Envelope, that requires little setup, and will add in some randomness to what is happening while the patch is played.

Yep, it fills that spot where a guitar usually sits. And, it sits nicely atop bass and drums. All I need now is to bring in some voice, and fill out the rest of the song, because the guitar is now in.

There are a lot of ways to do many different guitars with Parsec, as well as synths, bells, choirs, string symphonies, and more. It's an amazing synth, and I hope that through experimentation, you'll find something that rocks, too.