Language
Reason is a sound designers paradise if you know it well. G. W. Childs shows how to conjure up a classic 808 style cowbell in Propellerhead's popular music production platform.

Sometimes you're looking for a classic drum sound from the annals of electronic music history. Sometimes, it's hard to find these sounds on the fly. This is why I am of the opinion that it's good to know how to synthesize some of your own, should the internet connection be unavailable. One sound that comes up every now and then, especially when you have a taste for Old School would be the mighty 808 cowbell. In this quick tutorial, I'd like to show you how to make an 808-esque cowbell on the fly.

The key ingredient for our cowbell will be the Subtractor, Reason's trusty, subtractive, Nordlead clone, with an initialized patch setting. Go to Edit > Reset Device to initialize the patch.

And, though this will be the only ingredient in terms of audio, we will want one other piece just to make things easier. I'll create a ReDrum drum machine as well so that I have an 808-ish sequencer to trigger my cowbell. This way I can sculpt and make beats all at once. Don't forget to reset the patch on the ReDrum. 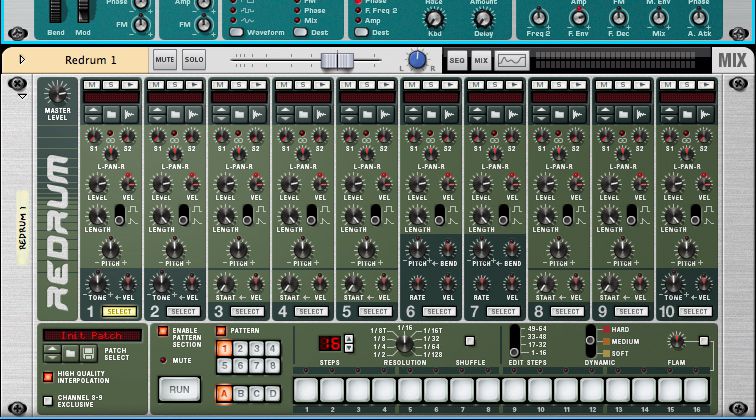 I'll press the Tab button, and turn the Reason rack around so that I can access the control voltage IO for both the ReDrum and the Subtractor. I'll drag from the Gate Out port of Drum 1, on ReDrum, and take the cable all the way over to the Gate of the Subtractor.

After pressing Tab again to turn the rack back around to the front panels of both devices, I'll draw in a quick easy pattern on drum channel 1 of Redrum...

When you press Run, or your space bar, Redrum will now trigger the Subtractor!

I'll also adjust the Oscillator Mix over to around 10 O'Clock so that I have predominantly the first oscillator.

In the filter section, I'll adjust the Frequency Cutoff to 50, so that that high first oscillator doesn't make an ear bleed. I'll also raise the Filter Resonance slightly to a setting of 30, just so the low has some push.

In the Filter Envelope section, I'll raise the Envelope Amount so that it's at a humble setting of 32, meaning only a light bit of modulation towards the filter. Note: The Filter Envelope Velocity modifier (F. Env knob) should be disabled. While still within the Filter envelope, I'll set the Decay to 55 and the Release to 68, which will keep our filter open just enough to let a little bit of the beginning high end tones, through, before they are filtered out with the Low Pass Filter. 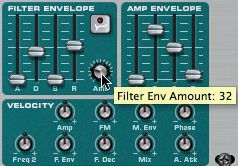 The Amp Envelope settings is where things really shape up. I'll adjust the Decay to 42, and the Release to 42. These short, equal settings will help, along with the Filter envelope, in giving us the right snap. Although, if you prefer a longer tail, and so on, please feel free to play with the settings. 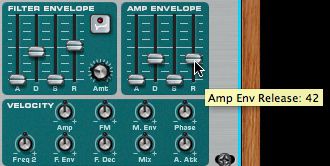 Finally, I'll adjust the LFO 2, so that it modulates the Phase. This leads to more of a chorus-like effect, essentially making the sound fatter. I'll adjust the Rate to 89, and the Amount to 31, giving us just a hint of phase modulation.

I would also suggest adding a little velocity modulation, in addition for the Phase. By having a random element being introduced when you're playing by hand, you're giving the cowbell just a hint of expression that wasn't there before.

Quick, easy cowbell. Granted, there's a billion different ways to skin a cat. But, this just happens to be a short, sweet method that won't keep you tweaking till the wee hours of the morning… like me. Well, maybe it will. Regardless, have fun with a small chunk of a new, self-built 808 cowbell!

Fabrikado
Thank you! I love your Reason articles. They are a little treasure cove.