Could The Taihe Gemini Be The Ultimate Powered Screen For Laptop Musicians And Producers?

With up to 4K resolution, battery power, multiple I/O and even the ability to charge other devices, this standalone portable monitor might just be the answer to mobile musicians' prayers.

It's been some time since the number of people making music on their laptops overtook the number using desktop computers. The reason? More powerful laptops with better batteries and wi-fi everywhere means they are a great solution for many musicians and producers.

The only major drawback still affecting laptops is screen size. A laptop can really only be as big as you are able to carry. 13-15 inch is the standard size, and only a few specialist gaming PCs really still come in 17 inch sizes - Apple phased out its amazing 17 inch PowerBook years ago. Yes you can run very high screen resolutions, but this also makes everything on screen smaller, and that can be a strain on the eyes.

There are apps that can let you use an iPad as a wireless second monitor for a laptop, but now Taihe has come up with another solution, and it's one we really might have expected to see someone invent before now. The Gemini - in HD and 4K resolutions - is a portable, battery-powered second monitor for your laptop. Not only that, it has a bunch of other features as well. It has smashed through its Kickstarter goal but the campaign runs until the 19th Feb 2019, and early bird deals are still available if you pledge during that period. With multiple ports, a rechargeable internal battery and touch screen, it could be the ultimate way to hugely extend your desktop space so you can keep more plugins open, view expanded mixers, and just generally see what's going on much more clearly in your projects. It can even charge other devices over USB from its internal battery. 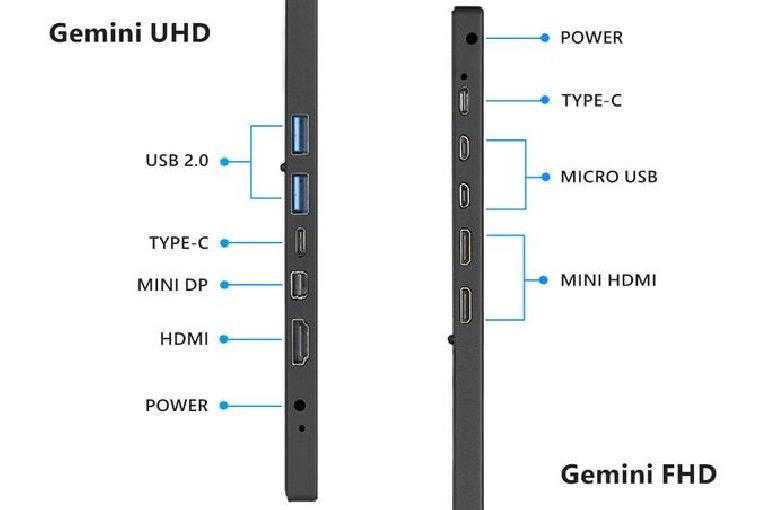 There's a ton of information on the Kickstarter page but here are some of the feature highlights.

Like a lot of musicians, we here at Ask.Audio do a LOT of work on our laptops, and the Gemini external screen would seem to solve multiple problems that we still face. Not only will it provide a very portable second monitor but it has a rechargeable internal battery, multiple ports and can act as a power bank.

We are looking forward to reviewing the Gemini soon so stay tuned for an in-depth look at how it performs in real world situations when running DAWs, plugins and other music software. We have lots of things to test, like how does it handle connected MIDI keyboards and audio interfaces over USB? Will it provide power to a laptop as well as a smartphone?

In the meantime, let us know in the comments if this looks like something that could fill a gap in your musical workflow!