Learn the ways to get the most of compressing recordded drums and beats in this in-depth tutorial by master trainer and producer, Joe Albano.

At the most basic level, compression is a tool for controlling the dynamic range of an audio signal—a compressor can reduce the range between the loudest and softest parts of a track, which can make the level of that instrument or vocal sit more consistently in a mix. But compression can also be used creatively as well, to deliberately alter the envelopes of notes, changing the character of the sound. Probably the most familiar application of creative compression is its use with drums, to pump up or or tighten up the sound of an acoustic drumkit, where it can be applied subtly or as a more obvious effect.

Most people are at least somewhat familiar with the standard controls presented by a basic compressor. The user sets a level Threshold—audio signals that exceed this Threshold will automatically be reduced in level (gain). A Ratio control determines how much the gain reduction will be, based on how many dB the signal goes above the Threshold. For example, with a 4:1 Ratio, for every 4 dB the signal exceeds the Threshold the compressor applies enough gain reduction to limit the signal level to only 1dB above Threshold.

More full-featured compressors will also have an Attack and a Release control. Attack determines how quickly the compressor begins reducing gain when the Threshold is exceeded, while Release determines how long it takes for the compressor to stop applying gain reduction when the signal drops back down below the Threshold. Some vintage/classic compressors omit the Attack & Release controls—that behavior is determined by the internal circuitry—but those that do include them offer more flexibility to the user for creative compression.

Depending on the speed of the Attack & Release settings, the envelopes of notes—the natural attack & decay—may be altered, changing both the initial snap of the drum hits and how the notes ring out. Attack & Release times are measured in milliseconds (ms)—thousandths of a second. Attack times typically range from a few ms (≤1-2) to several ms (10-20 or so), and Release times tend to range from around 40-50 ms, to 150-250 ms, to much longer times, 50 ms–1 second or more.

Often the best settings are ones that don’t change the original signal much (or at all), providing transparent compression. But experienced engineers also know how to manipulate the effect of the Attack & Release to deliberately alter the shapes of notes, for varied effects. With drums, this can have a similar effect to adding to or removing tape from the drum heads or using specialized heads and specific tunings for either a boomier or punchier sound. Using a compressor for this allows for creative flexibility after the recording has gone down, sometimes in response to the way the drums blend in the mix, or sometimes just for a more dramatic, bigger-than-life drum sound.

Probably the most familiar use of compression as a drum effect is to impart a bigger, boomier, more dramatic character to the drums, especially kick and snare, and sometimes toms. While this effect can be dialed up with any full-featured compressor that includes Attack & Release controls, it’s also associated with certain classic compressors (and the many modern hardware and software emulations they inspire).

The Urei 1176 compressor—widely available nowadays in virtual form as well as hardware—is known for doing an especially good job of creating “big” drum sounds that still retain their punch. The key is the speed of the Attack & Release response times, and the word is “fast”. To beef up the boom and ring of drums, a fast Attack and fast Release are called for. An Attack time around .5ms to 1-2ms will clamp down a bit on the initial drum transient—the initial impact—reducing the gain. Then as the drum note rings out, a fast Release will stop reducing gain before the note is done, letting the tail end of the decay increase in level, accentuating the “boom”.

The trick is to allow enough of the initial transient through (Attack) to preserve a little punch, and then let the ring come up (Release) just enough to sound big and fat without getting too boomy or mushy. With a generic compressor an Attack time of a millisecond or two often works well, and Release times of around 50-60+ ms would be a good starting point, adjusting for the specific amount of ring of the drums in a particular recording. 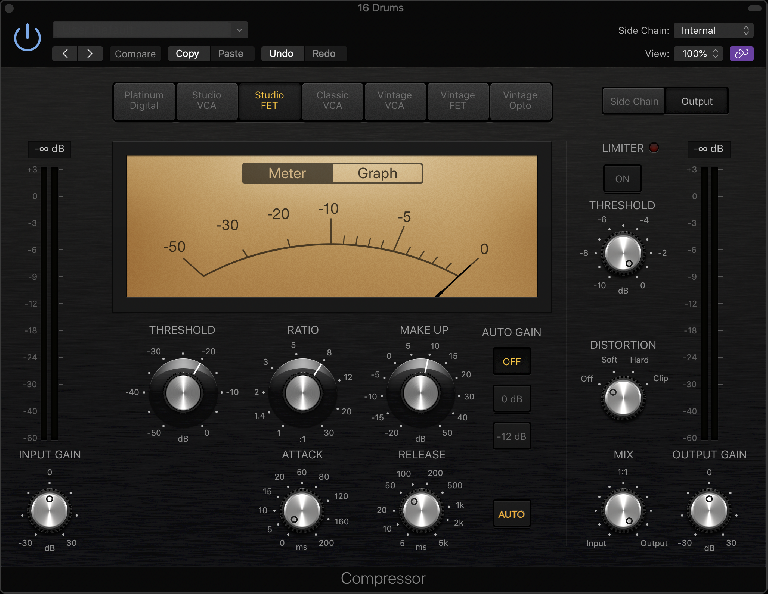 The internal circuit response characteristics of some compressors make them more suited to this—for example, the naturally fast response of the FET transistors used to control gain reduction in the 1176 (and its many emulations) make it eminently suitable for this kind of drum effect, which is part of the reason it’s associated with that particular effect.  (The 1176’s famous “all-buttons” mode—where all four of the Ratio buttons are pushed in at once—is often preferred for big drum sounds, and is emulated in most virtual versions of that compressor). On the other hand, the naturally slow response of, say, the optical-based LA-2A would not lend itself well to creating a big enhanced drum sound—the LA-2A would lean more to transparent compression.

On the other side of the coin, Attack & Release settings can be used to tighten up an already overly-big, overly-boomy drum sound. For that, the opposite settings are called for—slower Attack and slower Release settings may do the trick. To make a boomy drum note sound tighter (shorter)—like putting virtual tape on the drum head—an Attack time of around 10-15 milliseconds or so will let the initial impact transient through, instead of compressing it immediately when it crosses the Threshold, accentuating the “smack”. Then the compressor will kick in, applying gain reduction to the ring (decay) following the initial thwack, taming any excess boom and shortening the note’s decay.

The Release setting will depend on the original (actual) decay of the drum notes, but typically longer settings of around 200 ms or more will let enough ring/decay through so the drums don’t sound too choked, even as they’re being tightened up. 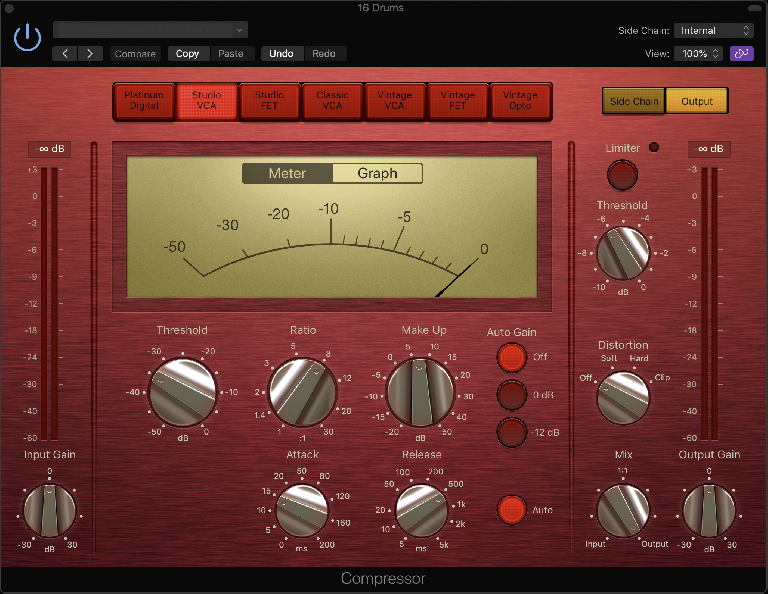 Audio example 2 Compression used to tighten up the drums:

With both Attack & Release, specific settings will be based on both the original signal envelopes and the response characteristics of the specific compressor in use—all compressors respond a little differently, so once the approximate values are dialed up the best settings will ultimately be determined by ear.

Besides the kind of deliberate manipulation of drum envelopes described above, drum compression is also commonly used for more subtle, transparent dynamic control. Often, besides the use of compressors on individual drum tracks (kick, snare) a compressor is inserted inline on a stereo drum master track, where it will affect the entire drum kit routed through that channel—the individual mics, plus the overhead mics, and sometime room mics as well.

This application would call for more transparent overall compressor settings—compression effects that may sound good on the drums can often sound bad on cymbals, turning them into an undesirable wash. So it’s common to have multiple compressors in use—some for more dramatic effect on individual drum tracks, and others for more subtle squash on the overheads or the stereo drum master. Sometimes heavier compression might be applied to room mics, if available—the overheads and close mics provide a tighter sound, while some enhanced ambient boom is added. The classic example usually cited is the drum sound in the Led Zeppelin song When The Levee Breaks, but this effect has been widely used for many years, on drums in appropriate songs/musical genres.

A compressor is normally applied as an inline processor—it interrupts the signal, compresses it, and sends the compressed signal on. But a compressor can also be used as a parallel processor, in the same way a reverb is applied in different amounts to multiple tracks, via a Send & Return hookup. Copies of tracks are routed (via Sends) to an effect in a Aux track, and both the original dry track’s signal and the effect-only signal from the Aux are blended together in the main stereo mix, in parallel.

When this is done with compression, the engineer will often apply a very heavy compression effect to the overall drumkit, but since the effect is being generated (in the Aux) in parallel to the original dry, un-processed signal, he can dial up only as much of the heavily-compressed version as desired, blending it in just the right amount with the dry track. The original dry drum signal provides the snap and punch, preserving the crisp attacks of the drums, while the heavily-squashed signal provides the boom and dramatic decay.

Parallel compression is a popular technique, especially on drums—it’s sometimes referred to as “NY Compression”—and some compressor plug-ins provide this capability without having to set up an Aux track and additional routing in the mixer. If a compressor has a Mix control, then the original dry signal can be blended with the “wet” compressed signal, for parallel compression right within the plug-in itself. 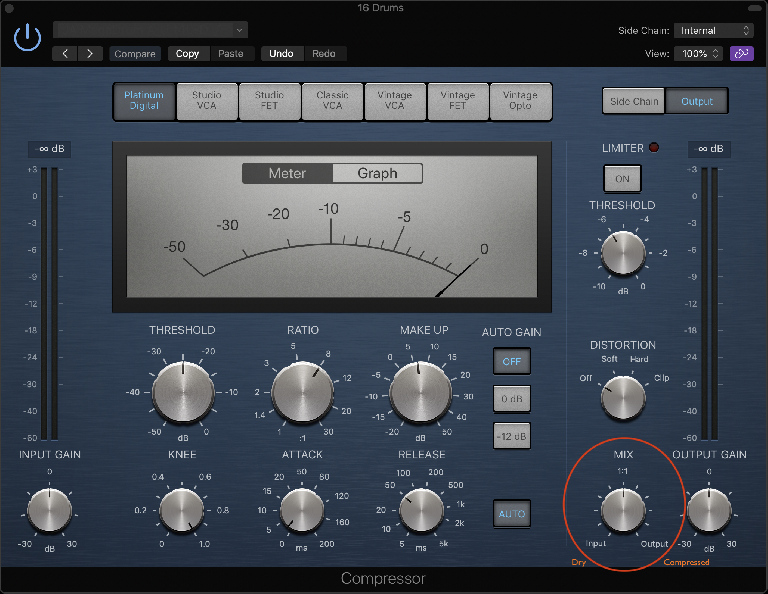 Squeeze it til it feels good

Compression is one of the most widely-used effects in recording and mixing, but at the same time it can be one of the most difficult types of processing to really master. The interaction of the controls, coupled with the different response characteristics of different models/plug-ins can make it a challenge to really get a handle on the various ways compression can be utilized. But with a little practice, it’s possible to get a lot of utility out of compression—both for basic use and creative applications—to dial up the perfect drum sound in any situation.