Composing with Ableton Live: Asymmetry, Polyrhythms & the State of Nonalignment

It’s no secret that one of the essential keys to producing innovative, forward thinking art is to break away from norms and think outside the box. With that in mind, I’m invariably searching for enthralling ways to keep material from sounding monotonous, stagnate and overtly redundant. Although there are numerous creative methods for transforming sounds over time, I’ll share several tips that I’ve uncovered based on asymmetry, layering meters and polyrhythms.

According to Google, symmetry is “the quality of being made up of exactly similar parts facing each other or around an axis.” Asymmetry is defined as the “lack of equality or equivalence between parts or aspects of something.”

With these particular qualities in mind, I’ll start with a very uncomplicated but efficient way of creating looped material that is varied and diverse simply because of the way the parts scarcely line up.

For this example, my goal is to keep the main groove consistent so that it’s not steering too away from the hook but at the same time seldom repeats. As the anchor, I’ve written a typical 4x4 kick/snare pattern while the supporting percussion parts shift between symmetric and asymmetric alignment.

Symmetric loop placement is the norm and easily accomplished by setting the clip’s loop brackets to evenly numbered beats and bars. This will result in material that plays over and over exactly the same every loop iteration. In the example below the brackets are set to two beats.

By way of comparison, to make the material seem less repetitive and create odd phrase lengths, I’ve shifted the loop brackets to an uneven loop length for both percussion parts. As demonstrated in the screenshot and audio example below, the material repeats in a much less predictable manner once the loop brackets are set to an asymmetric value.

Polymeter Madness and Beyond

Much of the world’s traditional music makes use of polyrhythms including Sub-Saharan Africa, which happens to have some of the most complex, grooviest jams on the planet. Respected artists such as Aphex Twin, Autechre, Plaid, The Chemical Brothers, Deadmau5, and many others make blatant and/or subtle use of polyrhythmic material for experimental electronic music and dance floor hits alike.

But what are polyrhythms?

Polyrhythms are the result of simultaneously incorporating two or more contrasting rhythms that are not simple incarnations of the same meter. They are built from subdivisions that are not evenly divisible nor divide into whole numbers. The resulting combinations create entrancing hocketing patterns that are anything less than square and straightforward.

As basic examples, I’ve programmed 3:2 and 2:3 polyrhythms into Ableton Live.

Similarly, I can achieve compelling results by juxtaposing multiple time signatures atop another. In the clip view, Live’s audio and MIDI clip’s launch box contains an area for changing meter on a clip by clip basis. This setting is independent of the global time signature as it only updates grid divisions for that particular instance.

Note- The clip time signature setting is for reference purposes and grid alignment only. It does not shift, alter or affect actual playback.

To begin, I’ll use an audio loop recorded in 4/4 and change the clip’s time signature to 6/8. Once again, nothing changes sonically only the grid shifts to reflect the changes. I’ll venture over to the clip’s volume modulation envelope and draw in breakpoints that only emphasize beats that correspond to the 6/8 compound time signature. In general, the results can be quite riveting and unexpected as the groove will differ from the underlying audio’s original rhythmic structure.

Making things a little more sonically captivating, in the next example I combine several clips with asymmetric loop lengths and 4/4 and 6/8 polyrhythms. Pay particular attention to the way the individual parts dance around each other in time, never repeating exactly the same.

In 2004, linking geometry to music, Godfried Toussaint brought light to what’s known as 'Euclidean Rhythm.’ Attributed to the Alexandrian Greek mathematician Euclid, Toussaint’s findings show how the Euclid Algorithm can be used to compute the greatest common divisor of two given integers to generate a large family of insanely tight polyrhythms.

For a closer look into the method behind the madness, check out Toussaint’s research:

Without getting too deep into the whats, whys and hows of all things Euclidean, I’ll limit this to being an introduction to another resource for creating polyrhythms. How about an Euclidean Rhythm MIDI File Resource for Ableton Live?! Do tell…

Ageofthewheel has brilliantly done all the math for us as he’s assembled an Ableton Live session file… TonysPulses. This session contains the Euclidean Rhythm prime ratios of 1 through 32 pulses (k) over 1 through 32 intervals (n) as discrete MIDI clips which can be assigned to any virtual instrument. Its availability is donation based and you can download it directly from ageofthewheel.com. (Please do donate as it’s totally worth all the awe-inspiring rhythms you’ll be pumping out!) 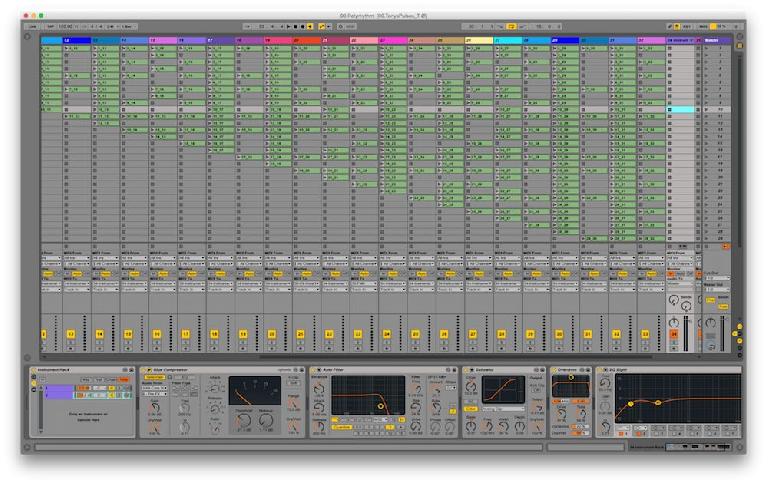 Although there are many other resources and Euclidean sequencers floating around out there, I found TonysPulses fit extremely well with my own workflow… triggering and altering clip playback using my Push and Novation Launch Pad controllers. After assigning the Euclidean track’s outputs to several of my favorite virtual instruments, I was up, running, and banging out funky beats like no tomorrow.

Circling back around to the topic loop length, the aforementioned symmetric/asymmetric concept can be extended further to include other types of envelope data such as parameter modulation.

By default, all envelopes are linked to play and loop along with the clip. This produces a symmetric relationship between the material being played and any of the associated envelope settings and values. However, envelopes can be unlinked from one another by toggling the ‘Linked’ button. Even more amazing, ‘Unlinked’ is an independent function for every parameter that shows up in the Envelope Box. To add asymmetry to the equation, unlink one or more parameters and set loop lengths to uneven values.

Hopefully these suggestions provide substantial food for thought. Experiment and see what works best with your productions. As I’ve discovered firsthand employing these techniques, the results can range from soul-stirring to subtle depending on how crazy you get with it. Regardless of how you choose to use these tips, for sure they’ll contribute to diversifying your content while keeping things sonically compelling and less redundant overall.