When it comes to recording and comping audio, Bitwig Studio might not be the first DAW that comes to mind. Don't let past perceptions put you off as Noah Pred shows how capable it is.

In traditional music studios recording vocalists and live musicians, it’s common practice to create the best possible representation of a melody, phrase, or passage by creating a composite – or “comp” – of all the best moments edited together from multiple takes. Traditional studio DAWs such as Cubase, Nuendo, ProTools, and Logic have built-in tools to help construct these composites with relative ease.

In contrast, modern DAWs such as Live and Bitwig – perhaps due to their emphasis on more creative elements of “in the box” production – lack explicit comping features. However, with Bitwig’s multi-clip audio editing and new Post recording action features, it’s possible to approximate a comping feature in just a few easy steps.

Similar to Live’s Clip Follow Actions, Bitwig Clips feature Next Actions, which allow a variety of other Clips on the same track to be triggered following playback of a certain Clip for a specified duration.

Taking this functionality a step further, Bitwig’s Post recording action lets you specify playback or recording actions to follow recording into a Clip slot for a specified period. These actions are global, and can be configured in via the Play menu. 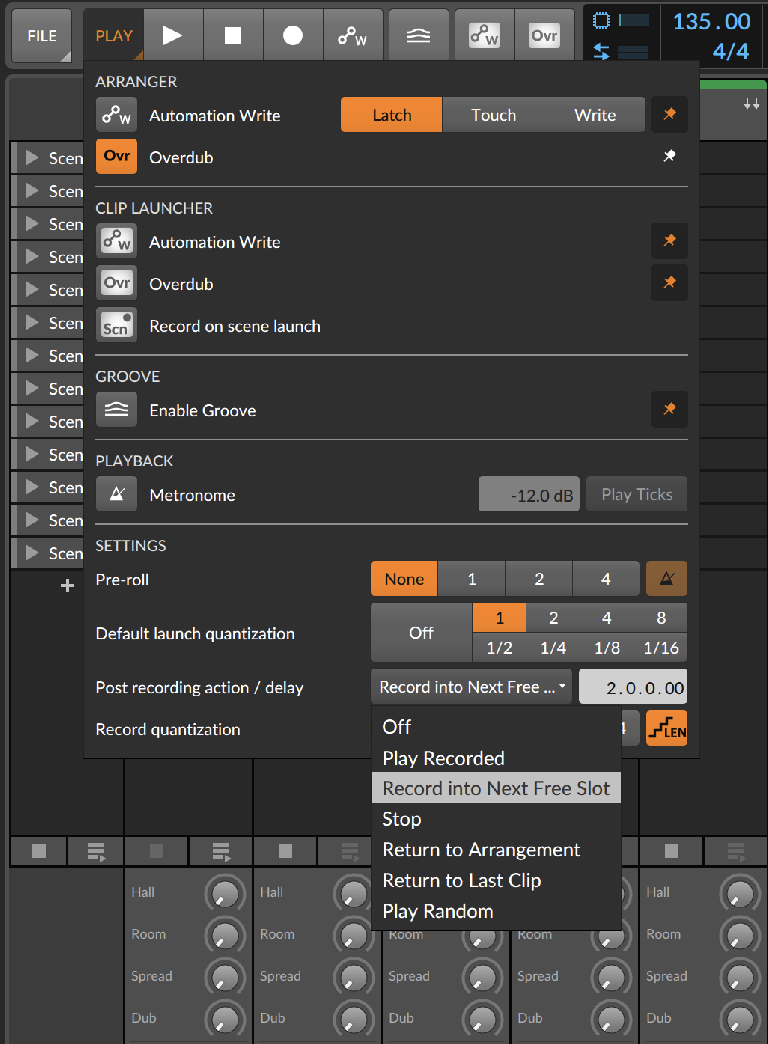 PIC 2: Setting up Post recording actions to Record into the next free slot after two bars.

By setting Bitwig to record into a new Clip slot every two bars, I can record multiple versions of the same two-bar riff as many times as needed until I feel like I have enough raw material to edit and compile into the ultimate composite take. For longer riffs or passages, simply specify a longer duration.

For this example, I’ve set up an Arpeggiator with some Random modulation. This is triggering a Korg Minilogue XD, which will be recorded into the Capture track via my audio interface. This could of course be configured similarly for any audio input, using a microphone for a vocalist or acoustic instrument.

While Random modulations will ensure some variety from one two-bar recording to the next, I’ll also be tweaking parameters on the Minilogue XD controls to differentiate the takes even further. The goal will be to put together at least one “golden” comp take from the varied input.

Before doing anything else, I’ll double-click an empty Clip slot on the same track to create an empty Clip, rename it “Comp 1” and extend the Loop duration from the default length to two bars. 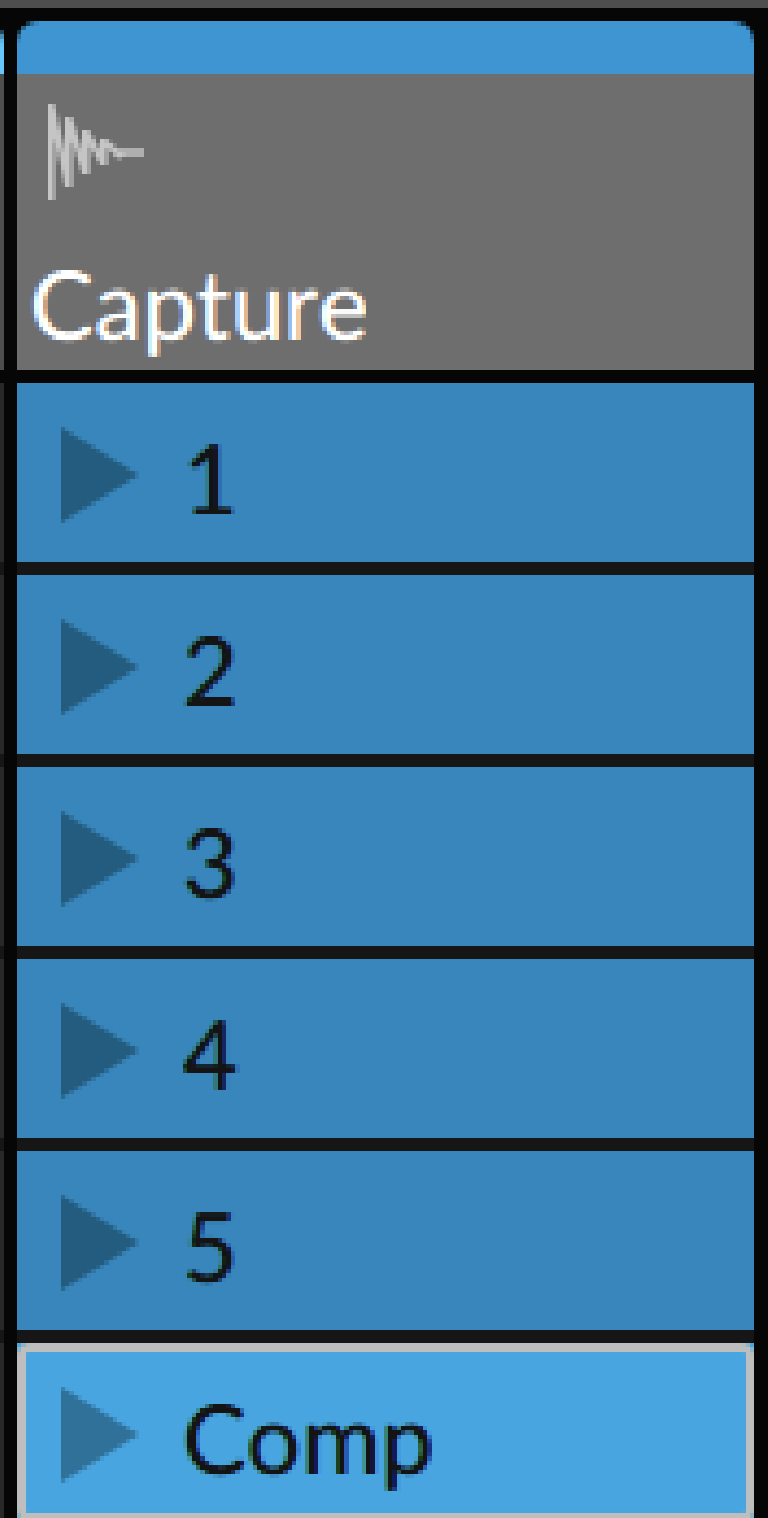 Now I’ll hold down Shift to click and select all six Clips on that track, then click EDIT at the bottom right of the Bitwig interface to enter multi-clip editing mode. Next, I’ll click the Layered Editing Mode toggle – the icon that looks like a stack of three squares at bottom left of the Editing area – to view and edit all six Clip takes simultaneously.

Since there’s no easy way to trigger the different Clips directly within the Layered Editing Mode, I’ll map the triggers of the recorded Clip takes to buttons on a connected MIDI controller.

PIC 5: MIDI mapping my Clips to a Korg nanoKontrol.

PRO-TIP: If I want to make sure I can’t accidentally edit any of the original audio, I can click the Lock icons to their right in the Layers panel at left – doing so prevents any editing whatsoever which means they only provide a visual reference.

To perform traditional comping edits, I will use the Time Selection tool (Hot Key: 2) while editing Audio Events. Triggering different Clips via MIDI, I can identify my favorite selections, then select and drag them to the empty Comp clip. 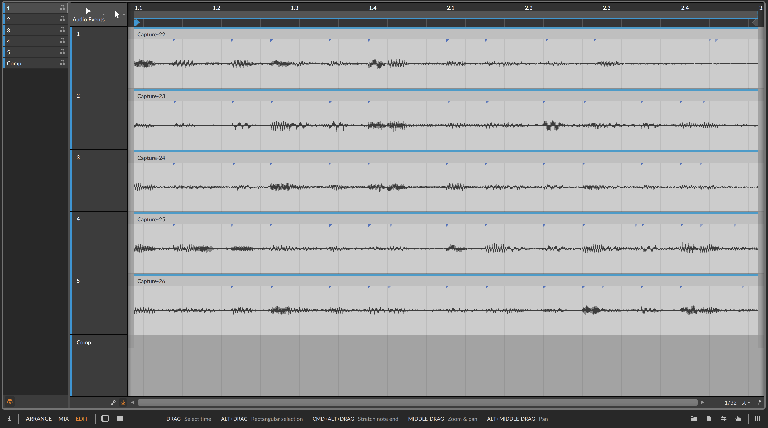 PRO-TIP: After clicking your desired selection, press and hold the Alt/Option modifier while dragging audio material into place to copy it, rather than remove it from the original Clip.

I’m fairly happy with this first composite, but to make the transitions between sections a bit smoother, I’ll impose stronger fades by switching to the Pointer tool (Hot Key: 1) and dragging the triangles that appear when hovering over the upper leftmost section of an Audio Event’s waveform view and dragging it further left over the preceding Audio Event’s edge. I can then hover where the fades meet and once both fade slopes turn white, I can drag up or down to impose Bezier curve fade slopes for even smoother transitions.

PIC 7: First Composite compiled from Takes 1-3, with crossfades in place.

Due to reverb tails recorded in the original takes from the Minilogue XD, the transitions are somewhat obvious – but recording a dry vocal or mic’d instrument in a more standard configuration should inherently avoid any such issues.

The first comp was generated entirely from material contained in the first three Clip takes, and I think there’s enough material in the second two original takes to make a second Comp, so I’ll go back to the Clip Launcher MIX view, double-click to create a new empty Clip, name it Comp 2 (while renaming the first Comp 1), and set it to two bars in length. Now I can use the CMD/CTRL modifier to select just takes 4 and 5 along with Comp 2 and then switch back to EDIT mode to create a new Comp from just those two Clips.

Since there are only three Clips in this case, I don’t have to MIDI map them since there’s room on my screen to easily trigger them in the Clip Launcher and view the Detail Edit panel simultaneously. 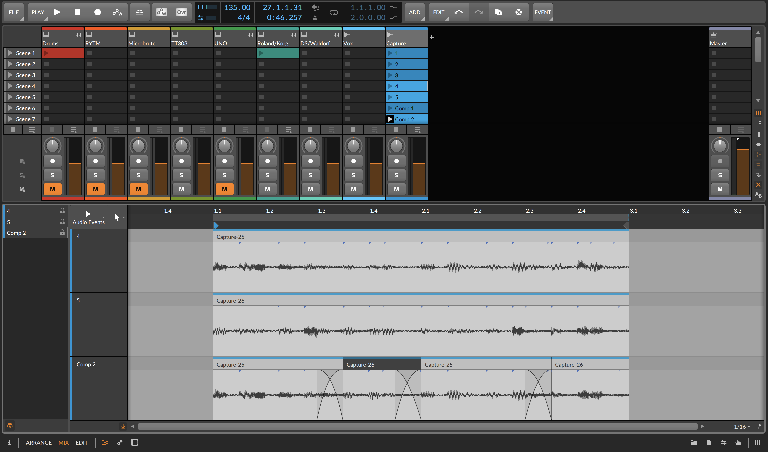 Finally, if I want to export the Comps, I can right-click the Comp Clip and select Bounce – or if I’m confident enough to eliminate the compiled edit, I can select Bounce In Place (or simply CMD/CTRL + B), which will replace the Comp with a newly exported audio file.