NEW YORK, NY, USA: having sold out of its initial production run, unique products-producing hardware startup Physical Synthesis is proud to announce that it is working with San Clemente, CA, USA-based distributor Electro Distro’s growing global network of dealers (https://www.electro-distro.com/dealers) to bring its game-changing Cicada — an ‘acoustic synthesizer’ that transforms electronic signals into physical vibrations that can be fully manipulated before being reconverted back into a new, never-heard-before electronic sound — to a wider audience, as of December 5...

It is fair to say that every once in a while, a moment comes along whereby human interaction with sound changes completely. Cicada is effectively one of those moments — one of those new instruments that moves the needle in music technology. Indeed, it is pioneered by unique products-producing hardware startup Physical Synthesis as an ‘acoustic synthesizer’ that transforms electronic signals into physical vibrations that can be fully manipulated before being reconverted back into a new, never-heard-before electronic sound. Says company founder

Spencer Topel: “Cicada was the first step in introducing physical synthesis methods to the synth community; it is an award-winning interface that really lets musicians explore microscopic sounds with precise control.”

Clearly, Cicada made musical waves when winning the Judge’s Special Award at the Guthman Musical Instrument Competition 2022, hosted by Georgia Tech School of Music — one of the few schools in North America that offers Music Technology as a major in undergraduate, graduate, and Ph.D levels of study — as an annual event dedicated to identifying the newest and greatest ideas in music.

Musical waves notwithstanding, ‘Noise' is a subjective term; while electromechanical devices like speakers or headphones try to minimise the distortion inevitably introduced in physical systems, Cicada is designed to precisely exploit these distortion products as the basis of a new kind of synthesis. Cicada converts voltages to vibrations in a mechanical oscillator to create intermodulation — the addition of frequency content in a nonlinear system — in place of typical analogue or digital oscillators. By bringing the signal chain into a physical space, Cicada allows users to shape such content with natural, tactile gestures that truly transcend twiddling with a knob or pushing a slider. Says Spencer Topel: “As a violinist and composer, my experience of creating sound is highly physical; with Cicada, I wanted to make an instrument that connects these elements, allowing musicians to produce complex, compelling sounds, but through tactile interaction with an instrument.”

Insofar as actually doing what it does, Cicada receives two Eurorack-level signals that drive oscillation in a cantilever — or ‘Bridge’ — positioned atop a soundboard at an adjustable height. Digging deeper, distortion caused by the Bridge-Soundboard interaction adds frequency content to the input, determined by the specific qualities of the system. Soundboards of EVA (Ethylene-Vinyl Acetate) foam, polycarbonate, and Birdseye maple provide a range of resonating/filtering properties that combine uniquely with oak, neoprene, and rubber-tipped bridges; each pairing opens up a portal to a distinct sonic universe. 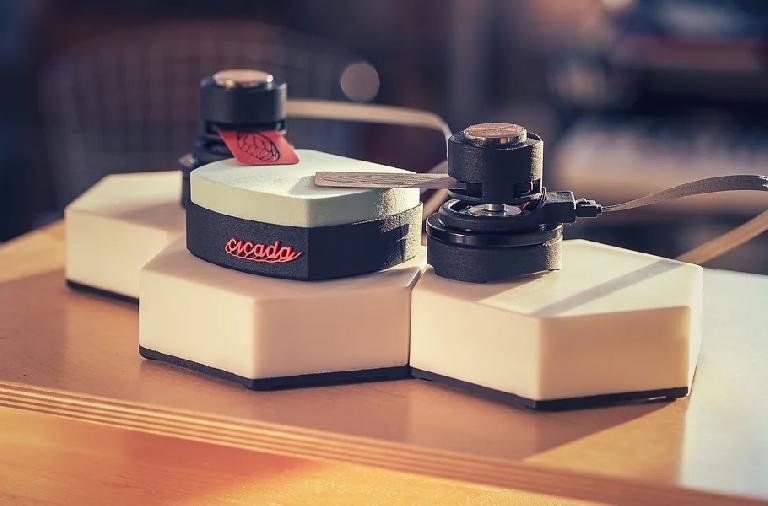 Users can dynamically change the system (and, therefore, how it is transforming signals) by adjusting the Bridge height, changing the region and degree of contact between Bridge and Soundboard, or applying pressure to either — effecting real-time, tactile timbral control, in other words.

With that being said, premium vibration damping materials, such as Delrin, and custom circuitry minimise unwanted noise, allowing the intermodulation products to shine, while the output, captured by a pickup microphone positioned beneath the Soundboard, can be monitored directly, processed modularly, or recorded into a DAW (Digital Audio Workstation).

With behaviours akin to those exhibited by a traditional acoustic instrument, Cicada is highly responsive to differences in the excitation mechanism — the input signal, in other words. As an example, striking a snare drum with a stick or using it with brushes produce vastly different-sounding results; driving Cicada with quiet or loud, spectrally simple or complex, or bass- or treble-heavy signals similarly yield very different timbres.

Though Cicada is designed to work with a Eurorack setup out of the box, one of its strengths lies in its inherent flexibility. Indeed, it can just as easily receive signals from a DAW, boosted to the appropriate 5-10Vpp level via an outboard mixer. Moreover, the choice of input is completely left open to the user: an Ableton loop run through Cicada acting as a physical filter to provide timbral variety over time, for example; an LFO (Low Frequency Oscillator) from a Eurorack module, generating rich percussive tones on the maple Soundboard as the foundation of a beat; or a harmonically dense signal — similar to the output of a Max/MSP FM patch (which many would, without doubt, prefer to navigate physically rather than digitally) — made by moving the Bridge around the soundboard to amplify certain harmonics and suppress others, finding a grittier sound with the Bridge barely touching or coaxing a more ethereal tone with it centred and depressed. 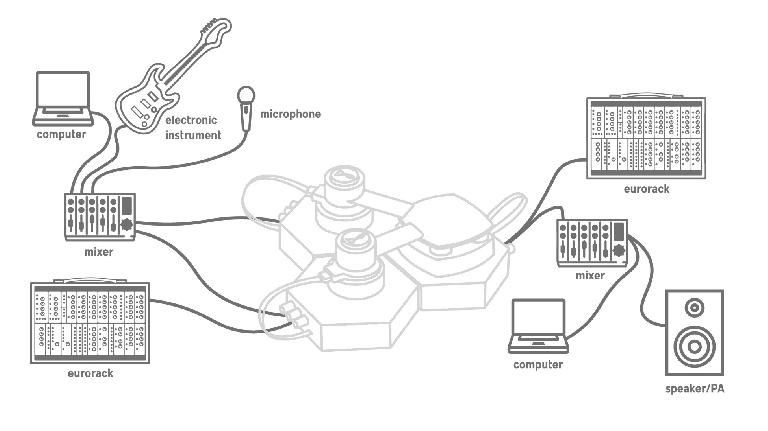 Endless exploration possibilities are a given, guaranteeing that any sonically-ambitious Cicada user is likely to while away the hours playing with input signals, system configurations, gestures, modulation combinations, and more.

“Cicada is a bridge-building instrument; the bridge between electronic music and the physical world. In a very simplified manner, it is a combination between a loudspeaker and a microphone, but at the junction of both there is a person — a performer — intervening in intricate and nonlinear ways, so it becomes a haptic interaction that brings physicality and real life to electronic music.”

It is little wonder, then, that Physical Synthesis sold out of its initial Cicada production run — really hitting a home run by counting luminaries like Ableton CEO Gerhard Behles amongst its (impressed) customer base — and has now turned to working with US-based distributor Electro Distro’s growing global network of dealers to bring its game-changing ‘acoustic synthesizer’ to a wider audience. “I want to bring acoustic synthesis to a wider range of musicians,” maintains Spencer Topel, before ending on a high note: “We are building some really exciting expansions of Cicada to different formats, including a Eurorack module called Nymph, which is coming soon.”