Language
MIDI Chord instrument, step sequencer, arpeggiator. ChordBot from ISLA Instruments can be described as being all the above. Excited? This video shows soon to be released ChordBot controller in action.

Via their Facebook page, ISLA Instruments, have been charting the progress of their first prototype for ChordBot, and in a few days we’ll hopefully see this become available via KickStarter. Watch the video of it in action below...

ChordBot is described as a MIDI chord instrument with a 32 step sequencer and advanced arpeggiator. One of its novel features includes the dedicated chord modifier keys which allow for simple selection of chords to enable you to quickly build songs. 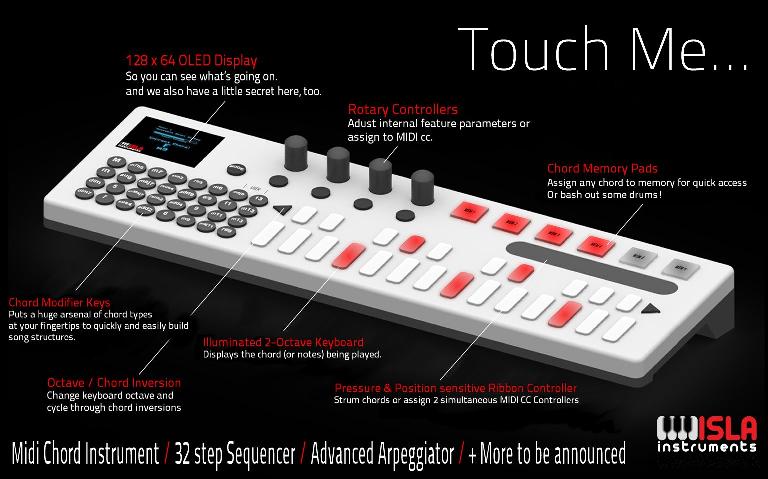 There’s a 128x64 OLED display with a feature they’re not talking about until sometime soon (we hope!) The two octave keyboard illuminates the notes or chords being played. The pressure and position sensitive ribbon controller can be used for chord strumming or can be assigned to 2 MIDI CC controls at the same time.

Four rotary controllers can be mapped to MIDI CC of your choice as you’d expect, or can be assigned to ChordBot’s internal features/parameters. And finally, there are six Chord Memory pads where you can assign user chords to or use as drum pads.

This video overview demonstrates how to store chords with ChordBot and the chord spread feature (innovative and easy way to play complex chords - see around 2:50 minute mark) :

The full feature set for ChordBot hasn’t been released yet. But we understand there is 5-pin MIDI din, the final version will allow for humanisation of note velocity, pads/keys will be velocity sensitive. The arpeggiator currently has 15 different patters, but you’ll be able to input your own using the step edit function.

In short, we think this has the potential to be a VERY creative device for musicians and producers…

The Kickstarter for ChordBot is expected to launch mid-February 2016. Although not officially announced on their website, we’ve been told that early kickstarter backers (limited units) can pledge $179 for one… and when they’re gone the price will be $249.