Choosing The Right Microphone For Your Studio: Mic Types

There can seem a bewildering array of mics out there but in truth, your choice comes down to a few key factors. Here, Joe Albano shares his pro tips for choosing the right microphone.

One of the first things any new engineer/producer/studio operator needs to do is choose one or more microphones for those all-important voice and acoustic instrument recordings. Smaller studios may get by with a single all-purpose mic, repeatedly utilized for sequential overdubs, while larger setups may require additional mics to handle simultaneous live performers or more complex instruments like piano (stereo mics) or drums (multi-mics). In any case that newly-minted studio operator will be confronted with a range of different mic designs, often best-suited for certain applications. Here’s a brief primer on the three basic microphone types—how they work, how they sound, and how they’re typically used.

The three microphone types are dynamic, ribbon, and condenser mics. Each uses a somewhat different approach to capturing audio—a well-equipped studio will want to have one or more of each, since they each have their own strengths to bring to the party

But first a little background. All microphones are transducers—they convert an audio wave from one form to the other, in this case from an acoustic wave (variations in air pressure) to an analog electrical wave (variations in voltage), which is then digitized by the audio interface and recorded in the DAW. In each case a diaphragm moves in response to incoming air pressure variations, and is connected to a circuit that generates the corresponding variations in voltage. The different mic types utilize different designs for this, and each has its own characteristic sound and response.

Mics can have various directional characteristics, or pickup patterns. Some respond to sounds from all directions (omni-directional); some respond to sound only from the front and rear, but reject sound from the sides (bidirectional, aka Figure 8); others are uni-directional to some degree—they pick up sounds primarily from the front and reject sounds from the rear and sides (cardioid, with several variations). The different types of mics may utilize different patterns, with some restricted to a particular pattern, while others may offer several different patterns to choose from—I’ll mention this as I go. 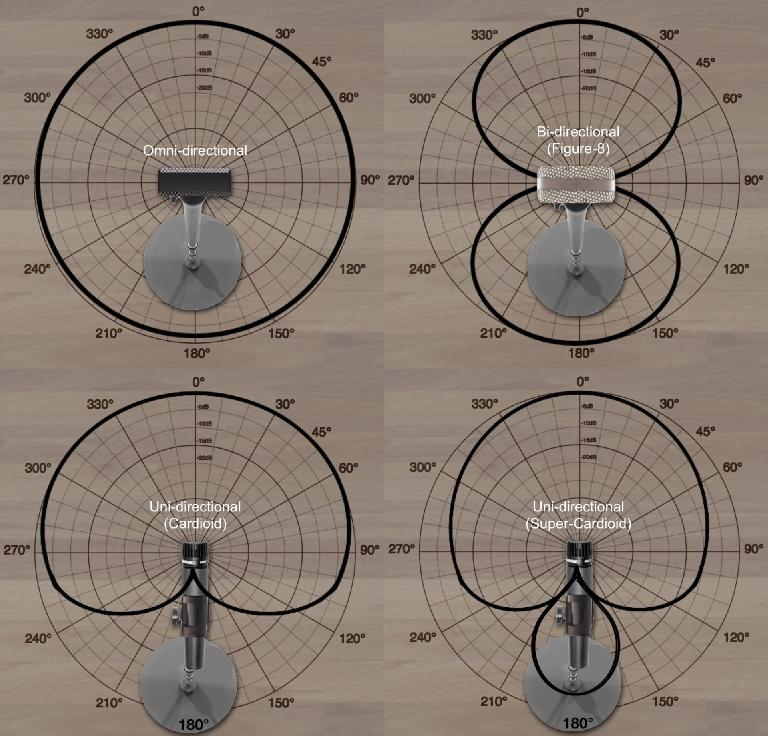 Let’s start out with what may be the most common type of microphone, the dynamic mic.

A dynamic mic utilizes electromagnetic induction to convert the acoustic sound wave to electrical form—this is sometimes referred to as a “moving coil” design. Within the mic, a suspended diaphragm is attached to a coil of wire within a magnetic field. When an acoustic sound wave strikes the diaphragm, both the diaphragm and the attached coil move back and forth in response to the variations in the acoustic wave. As the coil moves in the magnetic field, a varying voltage is generated in the wire—this is the electrical audio signal, an analog of the original acoustic wave.

Thanks to their design, dynamic mics tend to be physically rugged, so they’re popular for on-stage use for vocals and instruments, where they can easily stand up to the rigors of the road. In the studio they’re often used for close-miking louder audio sources like guitar/bass amps and individual drums in a full kit. Most dynamic mics tend to be directional designs, optimized for front-pickup, rejecting sound from the rear and sides, utilizing standard uni-directional patterns like cardioid, super-cardioid, and hyper-cardioid—this makes then suitable for both on-stage use and studio close-miking of instruments in tight quarters, like the individual kitpieces of a drumkit. The sound of dynamic mics can be very good, but it’s typically not quite as smooth as that of ribbon mics, or as open and airy as that of studio-standard condenser mics.

The most widely-used dynamic mics are probably the familiar Shure SM-57 and SM-58 (live vocals, guitar amps, snare drum, etc), but many others are popular as well, such as the Shure SM-7 and EV RE-20 (popular broadcasters’ mics), and numerous other modern offerings. Dynamic mics range in price from around $100 (SM-57) to $300-$400 for studio mics from Sennheiser and EV, among others. 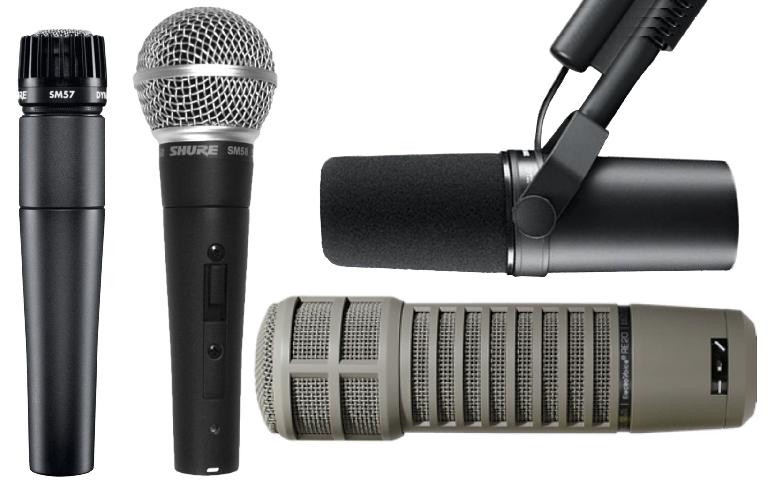 Technically speaking, a ribbon mic is also a dynamic mic, in that it uses electromagnetic induction to perform the conversion. But instead of the more hardy diaphragm used in a typical dynamic mic, a ribbon mic’s diaphragm is a thin corrugated ribbon suspended in a magnetic field. When an acoustic sound wave strikes the ribbon it moves back and forth in response, and a varying voltage is generated in an attached wire—once again, this is the electrical audio signal. 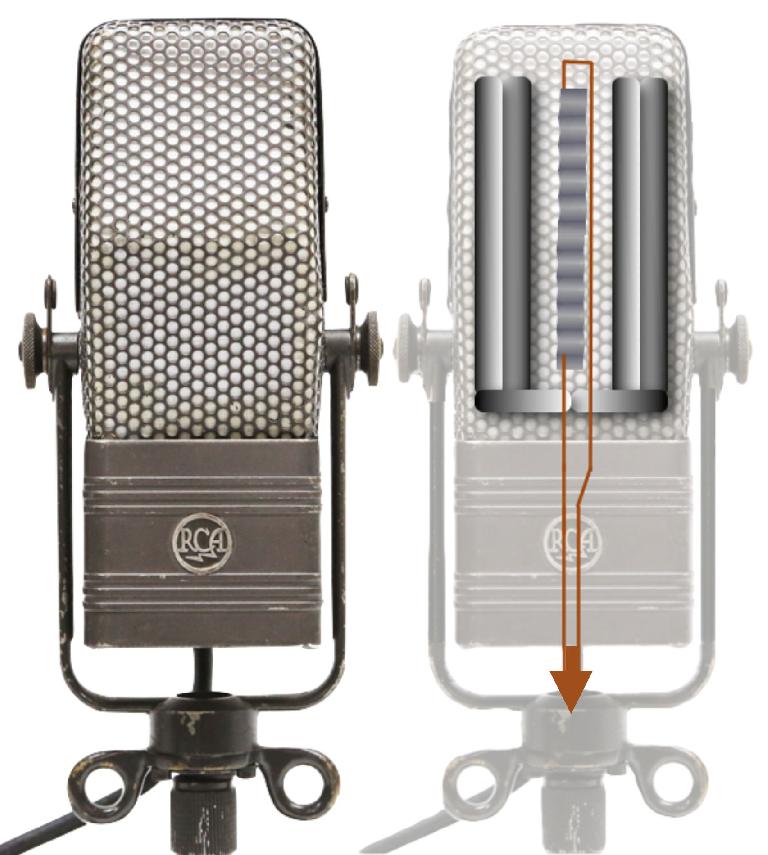 The defining tonal characteristic of a ribbon mic is its warm, delicate sound, thanks to the thin, lightweight ribbon, which moves more easily in response to the incoming acoustic wave. But this design has traditionally made ribbon mics more physically delicate than dynamics (or even condensers), making them more suitable for studio than stage use. Modern ribbons are more hardy, but they should still be treated with care.

Ribbon mics are good for many studio uses, from providing full-sounding vocals, to miking up instrument signals that can be overly bright, like brass instruments and guitar amps, where their naturally warm, smooth character can be just the thing to take the edge off certain signals.

Due to their physical design—a suspended ribbon—ribbon mics are bi-directional, picking up sound from front and rear, and quite effectively rejecting sound from the sides (90°). Classic ribbon mics like the RCA R44 and 77 are also available as reissues (AEA), and modern ribbons like the Royer R-121 and others are very popular in the studio, ranging in price from a few hundred to a few thousand dollars. 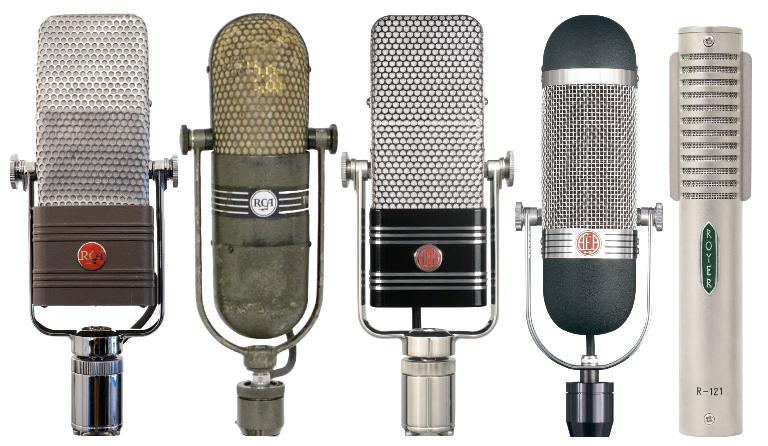 Instead of electromagnetic induction, a Condenser mic uses a capacitor design to perform the conversion from acoustic to electrical wave. A thin plate—the diaphragm—is suspended very close to another (back) plate attached to a wire, with an air gap between them. Diaphragm and back plate are charged, and this forms an electrical circuit called a capacitor. The diaphragm plate moves back and forth in response to the incoming acoustic sound wave, moving closer to and away from the back plate; a varying voltage is generated in the back plate and the attached wire—of course this is the electrical audio signal. 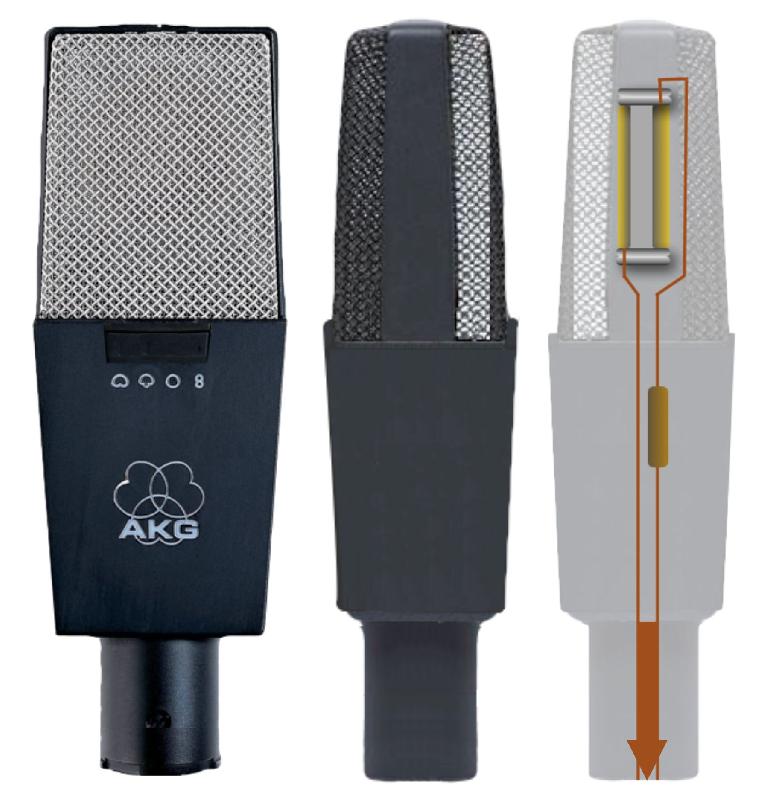 A power source is needed to charge the plates—in modern condensers power is usually supplied by the mic preamp, via a technique called Phantom Power. A 48-volt DC voltage is sent backward through the mic cable, from the mic preamp or a dedicated 48v power supply. Modern condensers utilize the phantom power from the console/interface preamps, but many older, classic condenser mics (and some modern reissues) come with their own dedicated power supplies, which connect to the mic via specialized cables.

LDCs are usually configured as side-address mics, where the diaphragm is oriented to the side of the mic. Sometimes, two back-to-back diaphragms are included—this allows for multiple selectable pickup patterns, making the mic more flexible. Multiple patterns are usually available with higher-end condensers, while “budget” single-pattern (usually cardioid) versions of high-end mics are often made available to offer the same sound and quality of those designs at a somewhat reduced price.

Thanks to the low mass of the diaphragm plate, condenser mics are known for having a crystal clear, open, detailed sound. Many large-diaphragm condenser mics have a designed-in boost in the upper mids and highs, which contributes to the reputation for clarity and air, and the quick transient response of small-diaphragm condensers provides excellent detail, especially for bright instruments like acoustic guitar and metallic percussion.

There’s a huge range of condenser mics available, from vintage classics like the tube-based Neumann U47 and AKG C12, to modern classics like the Neumann U87 and AKG 414, along with numerous high-end reissues, and modern condensers at every price point from a couple hundred dollars to several thousand dollars. Anything around $400 or so should provide full studio quality, with even the $100 range offering surprisingly decent sound for the those on the most restricted budgets. 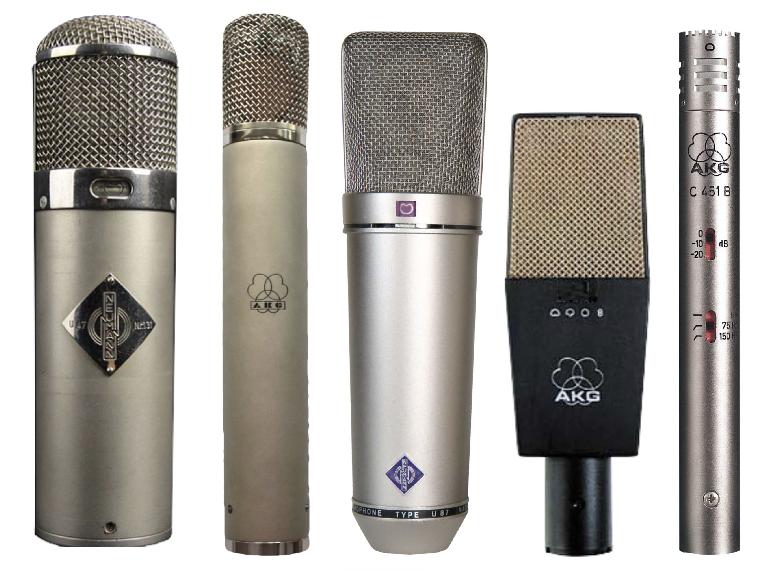 Of course, there’s a lot more to know about microphones—not to mention mic techniques—but that’s all I have room for here. Recordists and studio operators at all levels will benefit from knowing as much as possible about this all-important first stage in the recording chain.

Learn much more about microphone techniques, recording and mixing: https://ask.audio/academy?nleloc=new-releases