Language
What are the considerations when choosing a vocal microphone for recording in a live setting? Which microphones will stand up to the task? Joe Albano provides a detailed exploration in this article.

When making a live, multi-track recording of an artist or a band in a club (or other small venue), microphone choice can be a major issue. While there are clubs that pride themselves on their audiophile-level mic closets, many venues rely on the old (live) standbys, like Shure's SM57 and SM58 dynamic mics. Now, these are excellent mics, and perform admirably when it comes to sound-reinforcement tasks'"after all, they've become so ubiquitous for good reason!'"but for recording, they may not offer as much smoothness or clarity as you'd want. The sound of a '57 or '58'"or many other popular live mics, for that matter'"shoved up the bell of a sax, for example, may get that instrument into the house system just fine, but the overly honky character it's likely to provide may not sound so great back in the studio, when it comes time to mix and sweeten the live tracks. 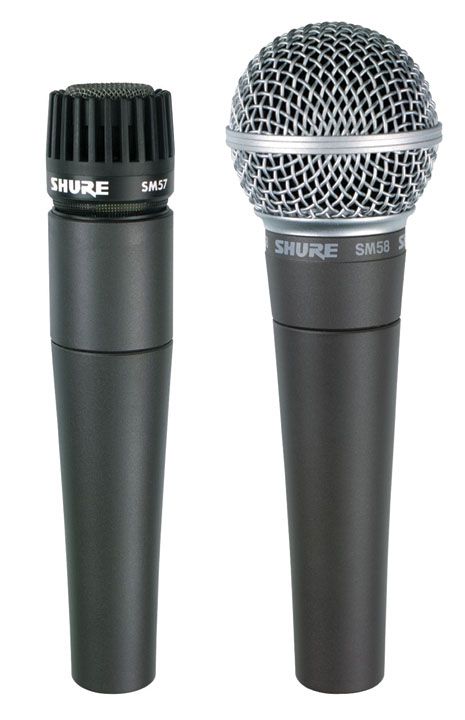 Naturally, vocals'"especially the lead vocal'"are a prime example of this. I've done live recordings where the singer used a hand-held '58, and the recordings came out fine, but, of course, there were issues to deal with back in the studio. With the mic right up against the vocalist's lips, the excessive proximity effect and somewhat muffled tone (at least by studio standards) had to be addressed.

Of course, these issues can be dealt with. EQ is the first line of defense in these situations'"rolling off the excess low end is the first step. For a '58 (and many other dynamic stage mics), I find that a little extra top end (8-12 kHz) may help bring out clarity, as long as the singer is not too sibilant, and taming the lower mids may help with any unwanted chestiness. Handling noise can be a problem'"if appropriate, I might suggest that, to aid in the recording process, the singer leave the mic on the stand for this show (after all, he/she will want the recording to come out well, too). This may not always be an option, especially if the act demands a more dynamic onstage presence, but it can be worth a shot.

Now, while live recording flaws can be addressed, to some degree, naturally, a better approach would be to try to capture better sound quality from the get-go.

The best option might be to bring and set up your own mic for critical applications. I've often done this with instruments, appending the stage mic complement with additional mics that only feed the recording rig, with (more) optimal placement and better mic selections. With a vocal, this can sometimes be done as well, although the presence of an additional mic at the front of the stage may present an issue. A headset mic could be employed'"they're often higher-quality designs, and can sound quite good. Many singers use them anyway'"especially those that have to execute a lot of dance moves'"but some vocalists don't like the look of them, or just prefer the traditional approach of stepping up to the mic to perform (for some performers, who may be shy or uncomfortable on stage, the mic can be a kind of psychological crutch, that they can anchor themselves to, to feel less exposed).

My preferred solution is to simply provide a studio-quality vocal mic to replace the regular club mic. But I don't mean to suggest you set up that pricey U87 or 414 on a rickety stand on stage, where its delicate diaphragm will be buffeted with blasts of air, and it'll be subject to unspeakable physical abuse (by studio standards). There are a good number of high-quality studio-grade vocal mics designed specifically for live applications, and any of these should supply a more even, balanced tone, even under the harsh conditions of stage use. In fact, many of them are designed to not only survive the rigors of rough handling and up-close vocal abuse, but to thrive in those conditions.

This mic was one of the first condensers specifically designed for live/vocal recording, with a crisp, clear sound, and a number of features that enhanced its ability to deliver the goods on stage. Besides the usual pad and lo-cut filter, there's an alternate anti-proximity lo-cut filter, that was specifically tuned to tame the mic's proximity effect when the singer was right up against it. This mic always delivered good live vocal sound, but nowadays there are many more options.

In recent years, a new gold standard for live vocal mics seems to have emerged'"the Neumann KMS104/105 (the 104/105 models are cardioid and supercardioid designs, respectively).

The KMS104/5 is specifically engineered for live performance, when the highest sound quality is demanded, which makes it perfect for live recording scenarios. Like the 535, the Neumann is a studio-grade condenser, with circuitry to counter excessive proximity effect, but it's also designed to withstand hand-held use, affording the singer much greater flexibility on stage, without having to downgrade to a more typical club mic. I've done a number of live multi-track recordings where this mic was utilized on lead vocals, and, while it doesn't sound exactly like a studio U87 recording, with only a tiny bit of EQ the vocal tracks were not only well-balanced, but also surprisingly well-isolated, even on a very small stage.

If a $700 price tag is a little too steep, there are other good stage condensers (and dynamics) out there, at half or even a third of that, any of which will be a marked improvement over typical club mics'"a quick Google search or a trip to the local audio emporium should present a wide choice.

Some clubs and singers I've worked with (who were concerned with sound quality) supplied their own Neumann KMS mics'"a very welcome development for the live recordist. But often, singers and/or house engineers will be resistant to having a live recording guy suggest a different mic. Sometimes, with sound guys, this is just a territorial thing; other times a singer may be attached to a particular mic, and, having been burned in the past, may be reluctant to switch it out for an unfamiliar model. But there are also legitimate concerns. If a house system has been set up for a more typical dynamic vocal mic, substituting a condenser, that also feeds the house, may cause feedback issues'"the condenser's more extended high end may require tweaks to the house EQ and any feedback suppression devices that are in use. But, with a little cajoling, and, if the house engineer is inexperienced, some gentle, tactful assistance, you can slip that studio-grade mic in there, and then sit back and enjoy the better-quality vocal tracks that result.

Learn about the art of recording in this series of courses at AskVideo.com.