The Europa Shapeshifting Synth in Reason 10 is a powerhouse instrument with almost endless possibilities. Here, learn how to make a rhythmic patch that sounds great.

Reason 10 is out, and there are a number of new goodies. But none so tantalizing to the ear and eye as the new Europa synth that just landed in the virtual studio. In this article, I’d like to take you through the new synth and point out a few of the ways this synth can add some fatness to your life.

It's All About the Engines…

Within every instance of a Europa are 3 ‘engines’ that act as the power cores of sound and hold the 3 oscillators that form the core of the sound originating within Europa. Each engine on its own is capable of one, giant, phat oscillator tone, or technically a group of tones. These engines can be stacked to create colossal pads, leads, basses, and more. But,when the engines are given individual things to do through the envelopes and LFOs you begin to see where a whole new layer of accompaniment could be easily added to your project. Let me show you what I mean.

I’ll create a Europa, and ‘Reset’ it, via the right-click contextual menu to clear the current patch settings, giving me a clean Europa, void of any possible programmings that might throw me off. 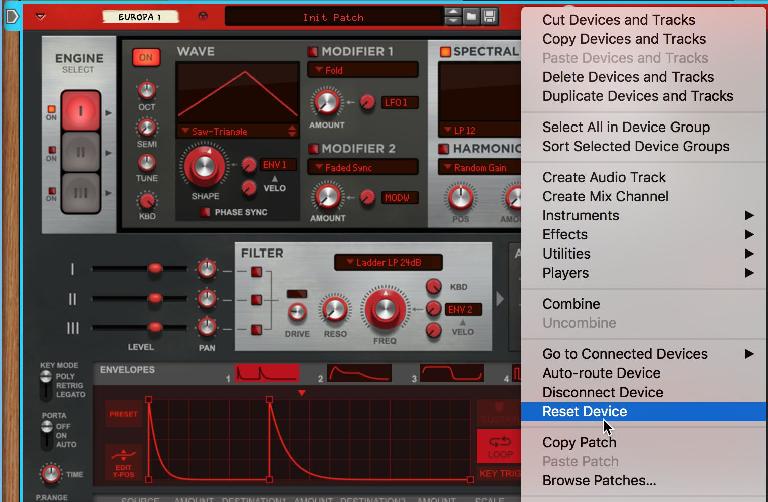 Next, in the Reason sequencer, I’ll draw in a sustained A2 note, and loop it so that I can tweak my patch in Europa while Reason plays it for me! This alleviates the need for me to hold a particular key, so I can dial in my patch with both hands. 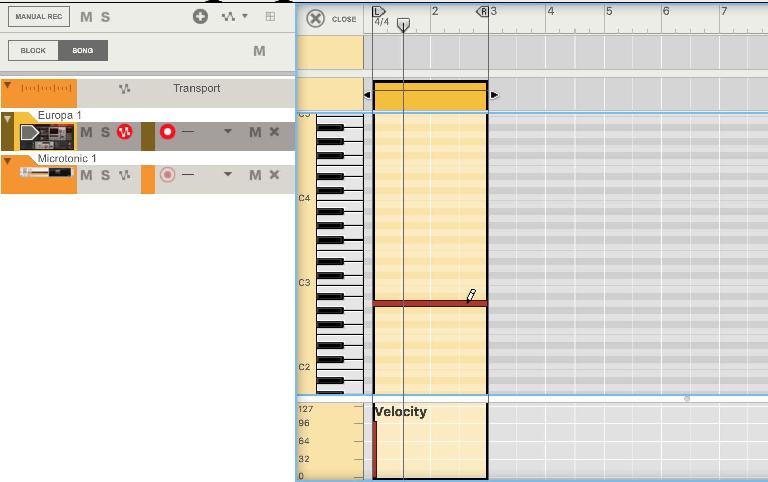 Now that I have some gas, I can steer the car, so to speak. As Engine 1 is already enabled by default, I’ll go ahead and select a waveform. There are a ton of waveforms to choose from in Europa, and the Shape knob further enhances the experience by allowing you to jog through many different ‘sub-shapes’ available once a waveform has been selected. From the drop-down menu, I’ll select ‘Transformer’ which is a waveform that has several different variations along the shape wheel (Or, in the original recording), which will be wonderful for modulation! 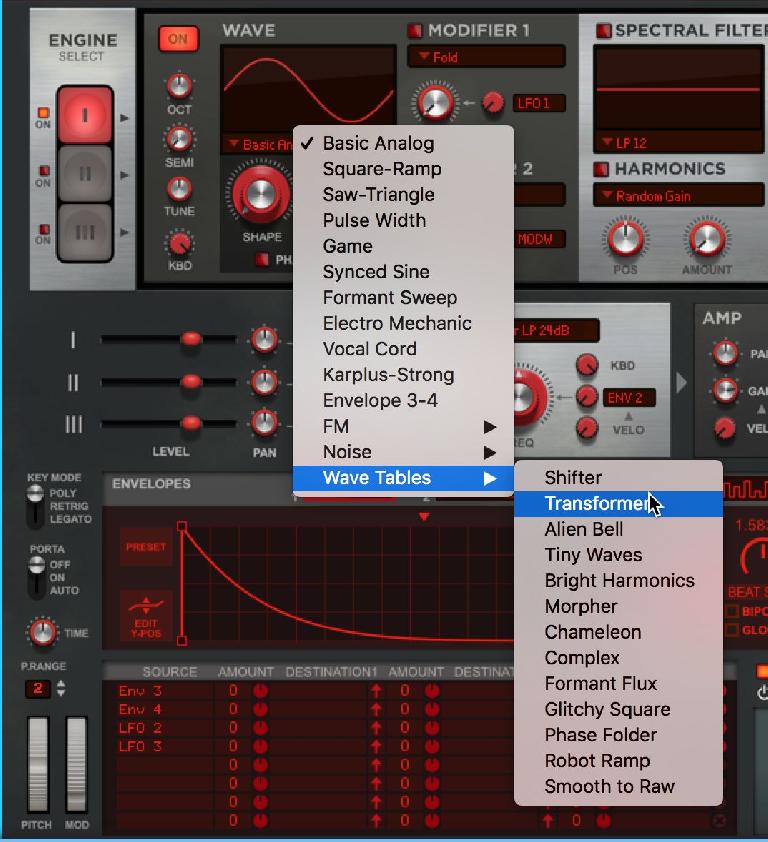 With the waveform selected, I’ll go ahead and jog the Shape knob till I hear a setting that works nicely to my ears. Then, I’ll enable a Modifier and select Unison 3, under the Detuning sub-directory. Once selected, I’ll raise the Amount knob of Modulation 1 so I can hear add in the amount of Unison that I’d like. On most synths, Unison is an additional feature, and in fact, it is in Europa, too. But unlike many synths, Europa is all about Unison, Phasing and phatness. You can set up Unison as a Modifier, before you ever even get to the actual Unison feature of the first Engine. Imagine how much bigger we can get this! 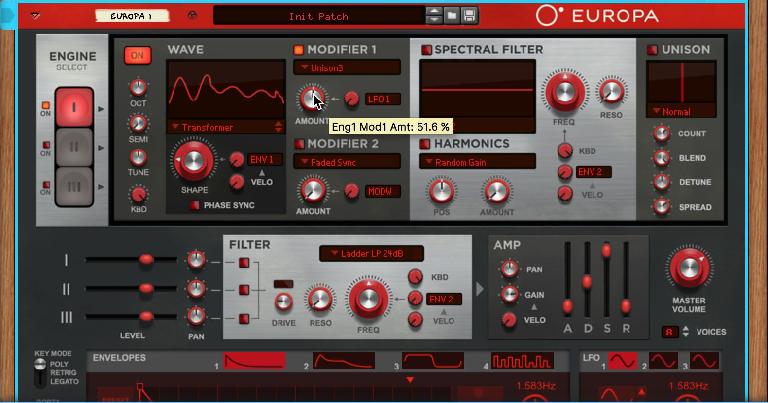 Now that we have a little fatness, let’s get a little rhythm going. I’ll enable the default low pass Spectral filter for Engine 1. Granted, this cuts a lot of the fatness we just created in the higher frequencies. However, thanks to modulation, we’ll be able to easily and quickly get bursts of some of those high frequencies back, through the usage of the incredible, assignable envelopes available within Europa. Currently, Envelope 2 is the selected Modulation source for Engine 1’s spectral filter. After enabling the Spectral Filter by pressing the small red button next to the Spectral Filter description on the faceplate, I’ll switch it to the currently selected Envelope 1, then lower the Cutoff of Engine 1’s Spectral Filter.

Now, as soon as I begin raising the Filter Modulation knob assigned to Envelope 1, I begin to get a very cool bump of modulation, as the playhead repeats its movement in display of Envelope 1, below.

But before I go too crazy, there are a few necessary settings that need to be activated before I can get a really tight pattern coming out of the envelope that I just assigned as a modulator! For starters, I’ll enable Beat Sync, and set the Envelope Resolution to 4/4. This ties the Envelope to the Host Clock, sets the envelope length to a full bar, making it very easy to dial in a pattern that grooves.

And there are patterns a-plenty via the Presets menu, easily accessed within the Envelope editor. I should point out that these patterns are meant to be used as templates for building your own, more elaborate patterns. I generally like to find a pattern that’s close to what I’m looking for and then customize away. In this particular case, the default curved ramp.

Drawing patterns in Europa is pretty easy. The vertical lines indicate beats within a measure, and I use these lines to make a pattern that is both tight and rhythmic, and spans the full length of 1 bar. And if I want, I can reverse the polarity of the pattern using the BiPolar button to make the Envelope reverse from top to bottom, in some cases removing unwanted background noise from sustaining notes.

Now that we have a pattern, it would be especially nice to augment it with a little effect. Thankfully, the Props made the internal effect section of Europa quite powerful, without the need to bring in any other external effects. The delay comes in particularly handy for me as it allows me to add further detail and texture for my newly created rhythm. This gives it further illusion of intricacy and complexity, when in reality, only one key is being held at a time to produce the rhythm. I’ll select the Delay, then press the On button, so that the small screen at the bottom shows the available controls. Just a little raise of the Amount knob, and suddenly delays in 3/16ths come in, backing up the existing pattern.

We got a lot of rhythm out of one Engine in Europa, and a lot of depth. Just imagine how much we could do when the two other Engines are added in, panned and mixed appropriately! Regardless of how many features we deployed, this is for sure - Europa definitely has a lot to offer in terms of sound, and in terms of being a wonderful modulation source for other devices.

Go in depth with Reason 10's Europa synthesizer in this video course: https://ask.audio/academy?nleloc=course/2691/europa-demystified