Language
If Star Wars fever has gripped you after watching The Force Awakens or you just want to make something cool in Reason, then this Lightsaber sound design tutorial is for you. May the force be with you.

To a Jedi, the lightsaber is a most personal, and a most precious commodity during one’s travels throughout the galaxy. Earlier in their career, the moment comes when each Jedi must construct their own lightsaber. Granted, we’re not at a level of technology, at least that I know of, where this is possible. But it is possible to start constructing how your lightsaber might sound! In this article, I’m going to show you how I went about creating my own lightsaber sound, in hopes that you might take this and do something even more original on your own.

Every lightsaber houses a crystal that focuses the energy of the blade, as well as supplies the physical color of the shaft of light. For my crystal, I’m choosing Thor—both a mighty oscillator, as well as a deep, and dark synth. I need to be careful not to fall to the dark side! I’ll start off in Thor, I’ll go with the default Analog Oscillator to use as the main ‘hum’ of my lightsaber. Or, at least the darkest part of the body. 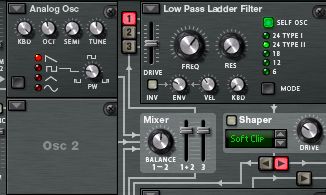 Next, I’ll create a Multi Oscillator, in the slot underneath my first analog oscillator and enable it going into Filter 1. Then, I’ll raise its octave up from 4, to 6. This will add in that secondary tone to the lightsaber that gives definition. Additionally, we’ll use this tone as our blast sound too. You know, when the blade cuts a gun in half, or impacts another blade? 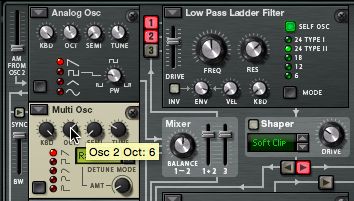 Tip: If you’re interested in going with something a little more custom from what I’m doing, start playing with your tones, now.

To hear our work, so far, go ahead and press E-1, way, way down the keyboard. Keep in mind, I don’t mean E1, I mean E-1. Reference this key, as we move along, to hear what is being done! Before you move on, adjust the Detune Amount of the Multi Oscillator to 24. Now, we’ve got some extra modulation going on in our blade.

Meditate on the Shape and Characteristic of the Blade

Now, we have the raw tone, but we need to give the blade sound definition and parameters to work within, so it doesn’t sound like a regular, old synth sound. First, let’s adjust the default Filter 1 to 776 Hz, and the Resonance to 85. This will keep the tone good and dark, but it will give us a little feedback when it comes time to do some modulation for blasting. I’ll also raise the Drive of Filter 1 up to 85 (Not shown).

In the top panel of Thor, I’ll set the Polyphony and Release Polyphony both at 1, and the keyboard mode to Mono Legato. I’ll also enable Portamento by turning it on, and I’ll raise the Portamento amount to 48. Occasionally, lightsabers change pitch when action gets intense. This will keep the blade from bleeding on top of itself and possibly causing an explosion. We don’t want any padawans getting hurt, right?

Back on the filter, let’s go ahead and add in some filter envelope. I’ll raise the Filter Envelope amount to 113, while ensuring the Velocity and Keyboard tracking are all the way down... 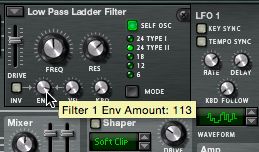 Then, I”ll modify the filter envelope settings to a 69.8 ms attack time, and a 1.33 s decay time. This will give us some sharp filter envelope action at the start, and help facilitate the blast part of our lightsaber, again. 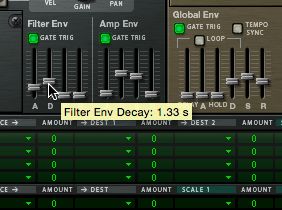 On the Amplitude Envelope we’ll set the attack to 110 ms, the Decay to 4.93 s, and Sustain all the way up, with the release all the way down. This introduces the blade, carefully, but eliminates any kind of tail, that could bleed out, later. Now, we need to really flesh out our saber blast/collision sound! In the Modulation Matrix, I’ll route the Mod Envelope to the Pitch of Oscillator 1, and set the intensity amount to 100. On the Mod Envelope itself, we’ll only set the Decay up to 1.90 s. Once you hit a key, now, you’ll notice a major jump in pitch. This may sound a little cheesy, but don’t worry! Effects will do some magic! Let’s jump on that now!

How Does Your Saber Sound in a Room?

Now, we need to give our saber some room characteristics. I’ll create an RV7000 version 2, and lower the Mix down to 50, and raise the Decay up to 90. This will emulate, at least a little, the dark cave, on Dagobah. We all need to face the darkness, right? 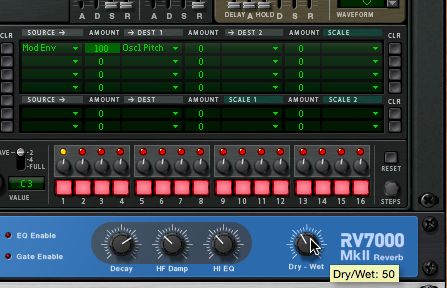 I’ll also add in a good, ol’ Scream unit to give my saber some bite! Though, only a little. I’ll drop the Damage Control down to 30, and set the Damage Type to Warp. Then I’ll set the Sharpness knob all the way down to the lowest setting. And, set the Bias to 2: 67.

Finally, let’s add a method of creating movement sound with the saber, without having a collision. On the Modulation Matrix, I’ll assign LFO 1 to modulate the Amp Gain of Thor with an Amount of 100. I’ll also have Rotary 1 be the Scale of how much modulation is introduced, merely by turning rotary 1 up a little... or a lot. 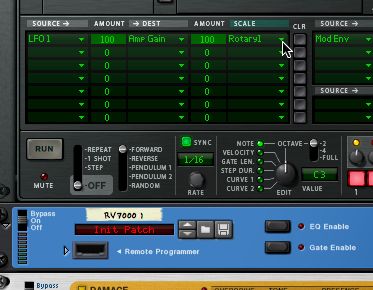 I’ll set the Rate of LFO 1 to 9.50 Hz, with the waveform set to a random square wave. Now, when you raise the Rotary 1 knob, you’ll make it sound like the sword is moving around. 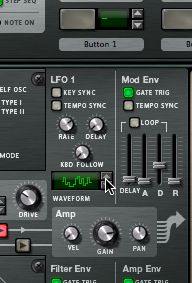 Granted, there are more sounds needed to truly make the full lightsaber: the start up sound, the power down sound, and some other impact types. But this does take care of the core of the blade, and it gives you the means to export this audio as a WAV, or AIF, which can be imported into some of the sound emitters, available in custom sabers, out there. There’s literally a program that comes with some of them, so that you can switch out and make your saber sound like your own. Check out Ultrasabers.com

Also, if you want to add some more depth and modulation to your saber, try adding in some modulation from Thor’s chorus. Or, an Echobode, like me!