Here's what our friends over in Berlin have to say about the latest update to their DAW, Bitwig Studio 3.3.

For our Bitwig spring update, we focused on greater control and sculpting possibilities for all sounds, whether coloring audio sources or reinterpreting note messages in new and adventurous ways.

Modularity means many things, but its main advantages is to offer the producer the right tool at the right time. Just as instruments are intended to offer expression without distraction, Polymer is a new instrument borne of that model. And along with the other updates, the aim is to extend and focus the musician's workflow when doing sound design, editing, and offering a world of wavetable. Welcome to Bitwig Studio 3.3.

Polymer, a Hybrid Modular Synthesizer
Polymer starts simple: pick an oscillator, a filter, and an envelope generator. Swapping out Grid modules within a dedicated synthesizer is both fast and quick, helping craft production-worthy sounds from minimal controls immediately.

Beside the three modules are a streamlined set of support parameters, such as a Filter Envelope Generator [FEG] that can also be freely routed to other parameters; a switchable Sub oscillator and Noise generator, which can either stay loud or be shaped by the FEG; a High-pass filter with variable slope; and gain, pan, and velocity sensitivity controls for each voice. And from this deceptively small package, a bouquet of synthesis is available:

Each of these possibilities is between one and three clicks — and they are not exclusive. By placing Grid modules into a direct interface like Polymer, the trade is fewer overall parameters for more (and quicker) results. 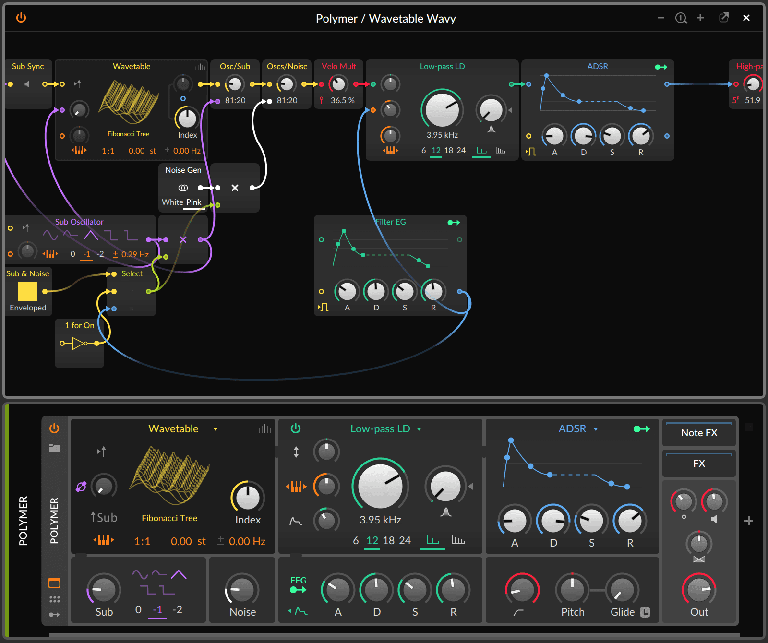 But to duplicate a module, add a new idea, or just rewire the system, Polymer can also be converted to Poly Grid for complete control. Another advantage of modules, modulators, and FX devices that are truly members of one body.

New Wavetable Module
The Wavetable module brings another method of synthesis to Bitwig. True to The Grid, this oscillator can be controlled by stereo control signals, accessing different parts of a wavetable at once. And it offers three specially designed unison modes for making a small universe out of each note played:

Wavetable is accessible both in The Grid and Polymer, using a visual browser to preview all files, side by side. Currently we include 120+ wavetables in five categories: real-world Acoustic instruments, various Analog and Digital synthesis techniques, recursive Fractal spectra, and various series of Harmonics. And for browsing this library are a trio of Polymer presets that are plucked (Wavetable Plucky), step sequenced (Wavetable Steppy), and read with LFOs (Wavetable Wavy).

Plus any WT file can be read directly, and Serum- and WaveEdit-compatible WAV files, etc., can be imported. 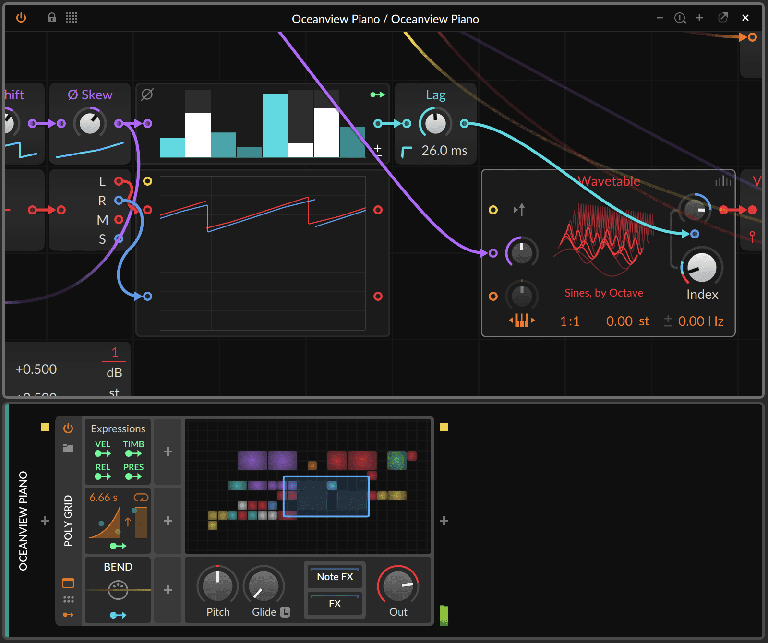 Updated Devices and Additions to The Grid
Besides adding new devices and modules, we’ve also added some new functionality to existing ones: 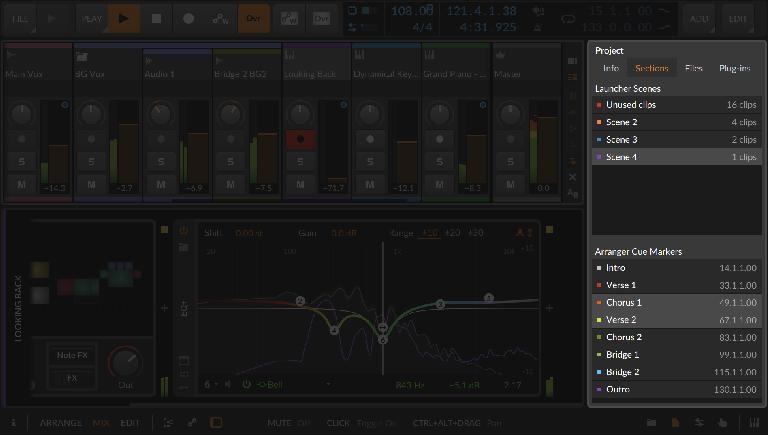 Editing, Workflow and Then Some
Free Content Scaling. Whatever is selected in the timeline can now be stretched directly. Just select a bunch of notes, and then ALT-drag the right-hand boundary to scale them relative to the left edge (or vice versa). Same with audio events or clips or any time selection. Or type in a percentage with the Scale… command for precision.

Project Sections Page. The Project Panel has gained a new Sections page, which lists all Arranger cue markers and Launcher scenes side-by-side. So now there's a reserved space for scenes and markers, even when a huge mixer, Grid patch, or whatever takes over the screen.

Preserve Your Transients. Always a goal of Bitwig Studio, version 3.3 extends this thinking to fades, allowing you to fade in from where your audio starts or to go back before it begins, automatically extending the clip and keeping the sound as edited. And adjusting crossfades, sliding edit boundaries, and adjusting gain only take one click now with improved gestures.

Modulation Enhancements. While modulators could always control each other, any single modulation routing can now be scaled by a modulator. And each modulation routing now has various curves, either for shaping the signal or making it responsive across only part of a knob range. So positive knob values (past 12 o’clock) might change one parameter, while negative values only change a different parameters, and so on.