Reason's new drum sequencer is great at helping you quickly building patterns. But it also makes creating entire performances a breeze. Here's why it is the go-to Rack Exension for beat makers.

If you haven’t checked out the new Drum Sequencer from Propellerhead, you really need to. While it sounds like just another good ol’ pattern sequencer to roll along with the Matrix, it’s actually got a lot more going on than that. In this tutorial, I’d like to show you why the Drum Sequencer is your new best friend.

It’s All About The Players

If you did download it but can’t find it (I got confused with this too), you need to look under Players in the Reason Browser. While the title, “Drum Sequencer” implies Utility, it’s not. And because the Drum Sequencer is a Player, there are a few things to keep in mind.

It does not actually have to be CV’d to anything to work. It just needs to be physically next to whatever you plan to control with it.
While there are Gate Outputs on the back, because the Drum Sequencer is a Player, it needs to be ‘attached’ to another device. It can’t be brought in as a standalone device.

With these two little bits of information in mind, let’s go ahead and add a Drum Sequencer! In a new session, I’ll create a Redrum device and load it with a fresh 808 drum patch from the Factory Library/Redrum Drum Kits/808 Kits/Peff 808 A.

Then, once my Redrum and drum patch are loaded, I’ll drag a Drum Sequencer right above Redrum.

By being placed above Redrum, it now controls it. No other connections needed.

Now that we have a Drum Sequencer up and running with a device to control, let’s look at some of the perks. One of my most favorite right out of the gate is the Direct Record option as it makes drum pattern creation simple and fun! I’ll enable it by pushing it to the right… 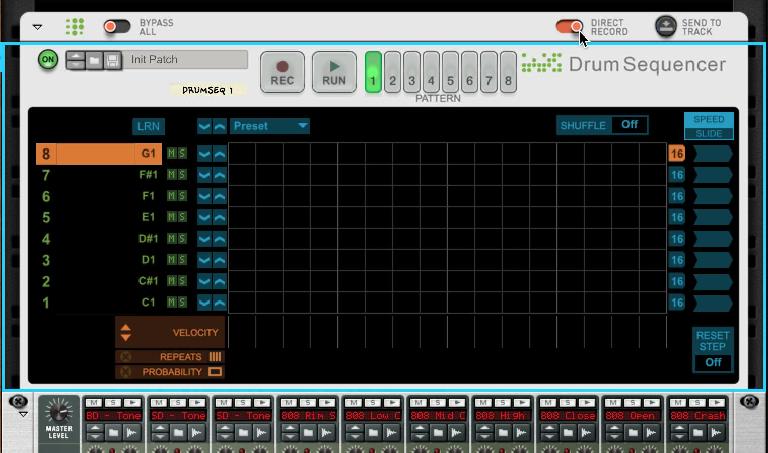 Now I can press Record on the main Reason Transport to begin recording to the Redrum track, dropping in little steps at a time while I’m building a pattern in the Drum Sequencer, and the main sequencer is recording every change I make in the Drum Sequencer. This is incredible as it allows you to enter drum beats via the cursor, MIDI, Alter, Random, or even by loading MIDI patterns while the main sequencer records everything… entirely quantized! It’s like adding in a little Robot with perfect timing to play all my parts for me. I just have to direct it. 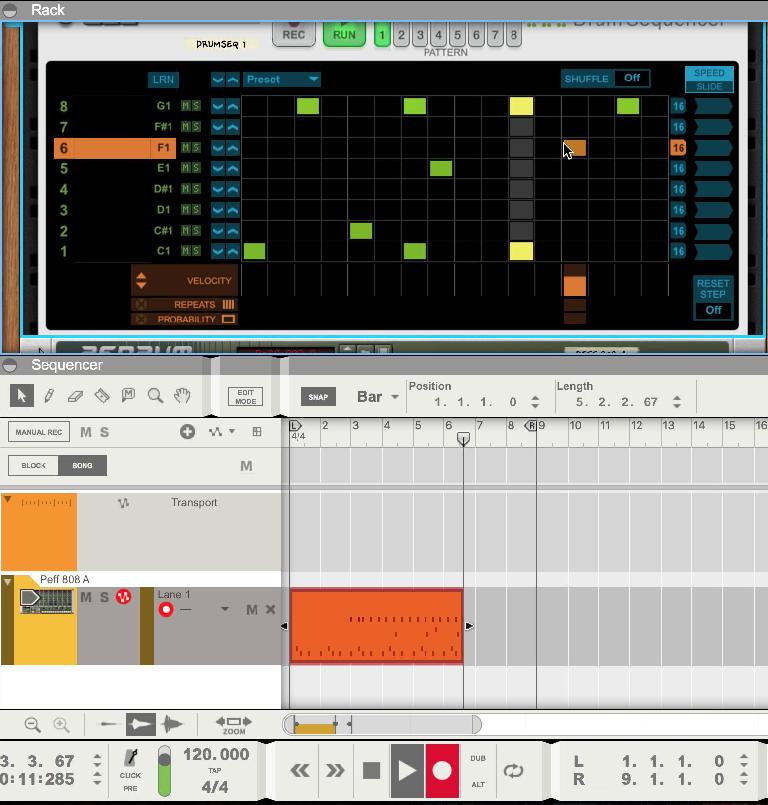 As you can hear in the clip above, this also allows me to create a giant recorded clip of self-generated MIDI that is entirely original, that I can go back and mine for cool, unintentional drum loops. I can just separate out the individual clips from the bigger, original clips, Then I can go back and produce each individual loop, later when I’m ready. Or I can just use the entire clip as the foundation for a new song. After all, it already builds up like a song would!

Now the significance of real-time recording through the use of a step sequencer as I’ve outlined above may not sound that amazing if you’re not much of a drummer or drum programmer. But after this section, trust me, you’re going to feel like much more of both a drummer and a drum programmer. The Drum Sequencer can make anyone sound gifted, and it always keeps you in time. Plus, it makes it very easy to populate a pattern quickly, as it can load individual drum channels from saved MIDI patterns already existing within Reason.

Here’s a very easy way to get your feet wet, while really getting a feel for how powerful the Drum Sequencer can be: 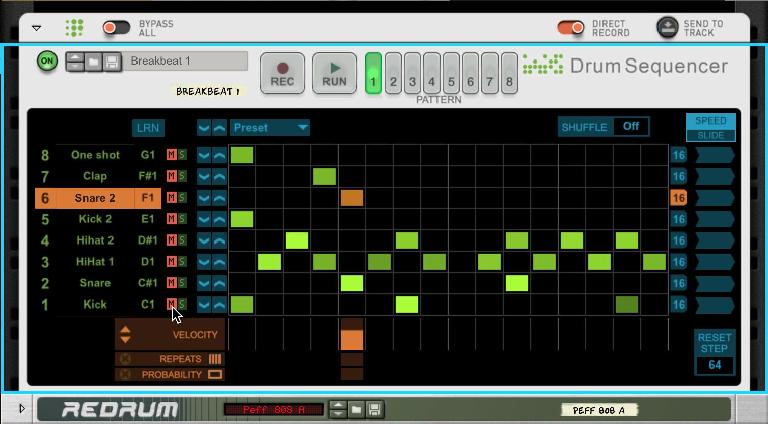 I’ll load a Drum Pattern from the Reason Factory Soundbank for the Drum Sequencer, and then mute all of the Drum channels within the Drum Sequencer, as shown above. Now, I’ll just selectively un-mute parts while the main sequencer is recording. And as I do this, each un-muted part is recorded in realtime, making it seem like I’m a drummer slowly creating a build up, by introducing the kick, then the snare, then hi-hat. All I’m really doing is un-muting channels but it seems like I’m doing a lot of work! 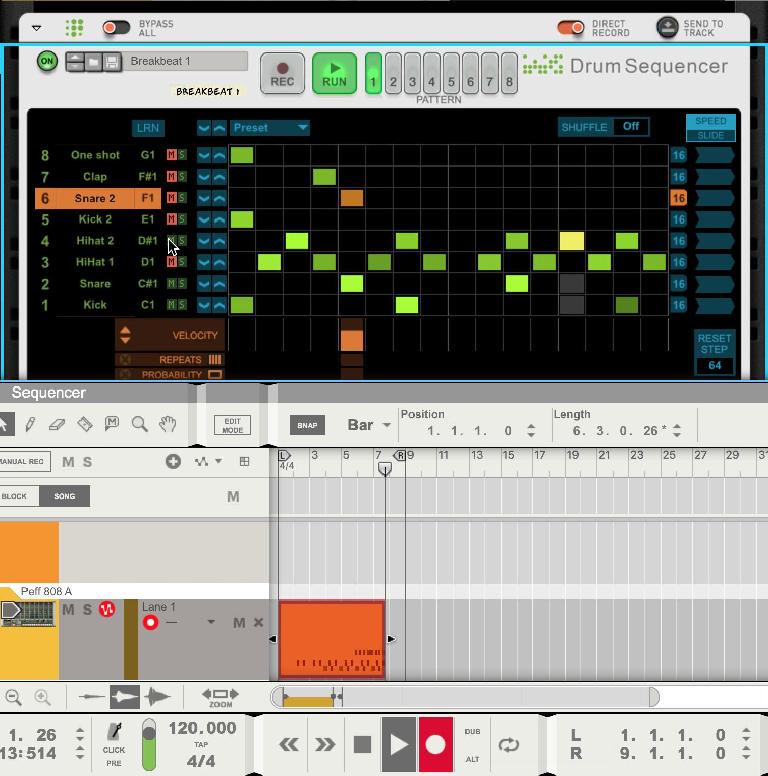 While continuing to record, if I drag the Length amount (by default 16 steps) to the left, I can limit the amount of steps within this particular Drum Channel and cause either a roll or a shorter, more repetitive pattern. This is awesome for creating quick hi-hats and quick snare rolls! Check out the audio clip below where I’ve set the length to 1 on a few channels, generating a 16th note snare and hat roll. 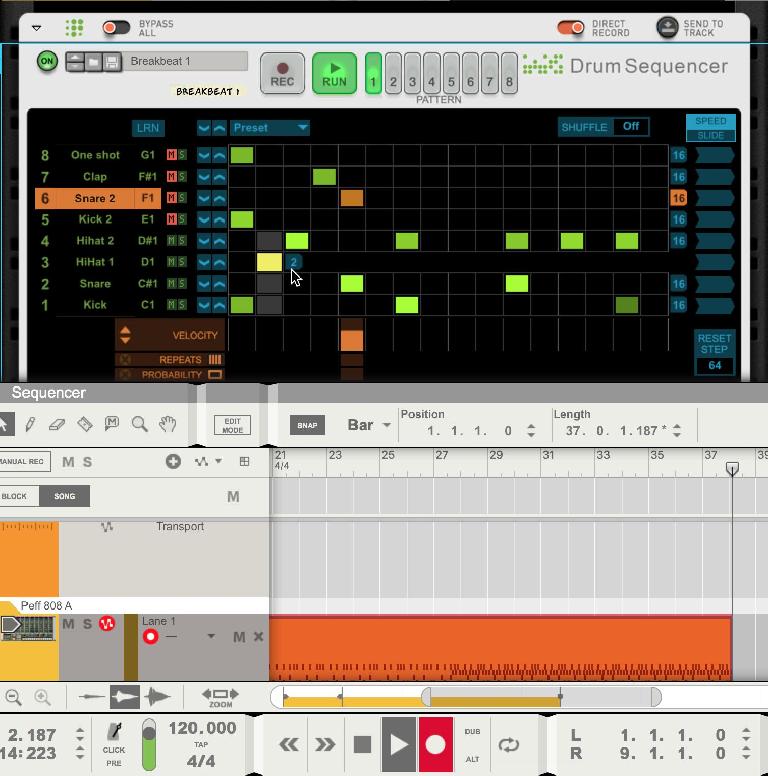 Just drag the drag the length indicator to the smallest number required to recreate the cadence and amount of repetitions you need. Then when you’ve had enough, mute the channel. Or, just create a new, basic beat for this channel moving forward. Very simple, but sounds awesome when it’s being recorded in realtime by the main sequencer.

If you’ve been using Reason for a while and rely on drum editing staples like Alter, Randomize, Shift and so on, don’t worry, Propellerhead did not forget you!  The small drop-down menu at the top of the Drum Sequencer’s interface by default starts off in Preset mode, where you can use the small arrow next to the sub-menu and the individual channels to move to different patterns within the current drum pattern directory you're working in. 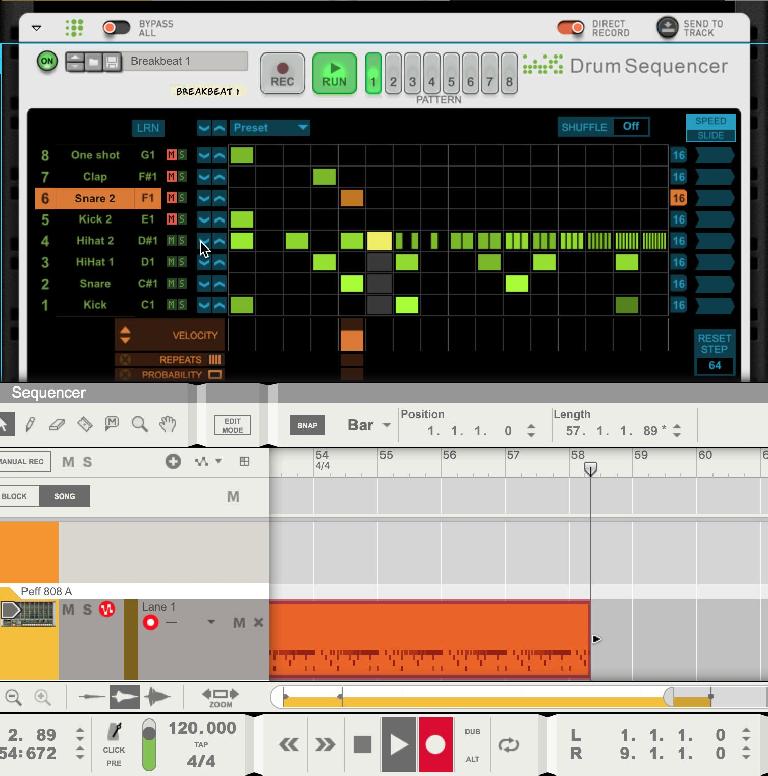 If you click on this sub-menu however, you’ll see some other, very familiar commands. Alter, Randomize, Shift, Alter, and even Copy/Paste are all available and just need to be selected.

Each selection will reveal a different type of button on the drum channels, which make it easy to identify what’s going on, coming in to a new Drum Sequencer session. For example: Alter, if you remember, simply redistributes the available steps within a channel, or in an entire pattern in a different order. It has a button that resembles a Loop symbol, and implies moving things around.

The Drum Sequencer is a beast for creating  patterns quickly but also entire performances too. It can make it seem very easy, as you can have Reason record everything you’re doing while building beats. Once finished, all you have to do is go back, pick out the cool stuff and edit what doesn’t work. Ain’t MIDI great?

Learn Propellerhead Reason inside out: https://ask.audio/academy?nleloc=category/audio/application/reason