This year saw updates and new releases covering everything from keyboards and Eurorack modules to chord assistants and MIDI guitars. Here's our roundup of the best MIDI controllers of 2018.

The SL MkIII is a MIDI Keyboard controller for your DAW as well as hardware devices that respond to MIDI or CV. It has a built-in polyphonic 8 track sequencer with USB, 5 pin Din MIDI and analog CV outs. The SL MkIII comes in two sizes now - 49 key and 61 key. Novation already produces the highly popular Launchkey controllers but the SL Series is for the musician who is looking for a bit more from their controller. It ditches Automap for the new Controller software, and its internal sequencer is a particular highlight. And with its comprehensive feature set, the SL MkII is able to play the role of several devices, making it a worthwhile addition to your studio.

The Nano Key, Nano Kontrol and Nano Pad come in a variety of bright colours as well as the standard black finish. The blue and yellow Nanos pair with KORG Gadget, KORG’s acclaimed DAW software for iOS and Mac, which has become a popular tool for music producers and songwriters everywhere. The orange and green models pay homage to multiple popular DAW environments. Each purchase comes with downloadable codes for the KORG software bundle, a comprehensive suite of music production tools, along with a 20% discount coupon for KORG’s Gadget for OSX. 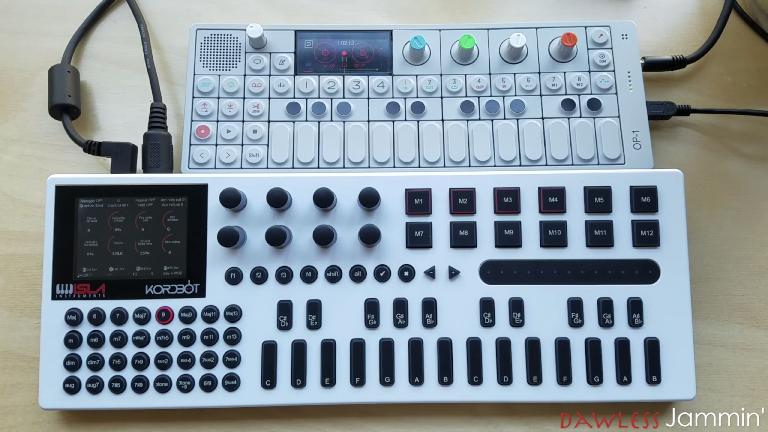 Ever wish you had the ability to use different and complex chords in your music without having to learn any theory? Meet the KordBot, a neat little MIDI controller whose specialty is making chords. On the right you get two octaves to play with, while on the left you will find a collection of chords that have been very thoughtfully placed. The KordBot is a neat little production tool that’s great to get ideas going - the squishy keyboard is easy to get used to after playing it for a bit, and full size 5 pin MIDI IN and OUT are definitely a plus. 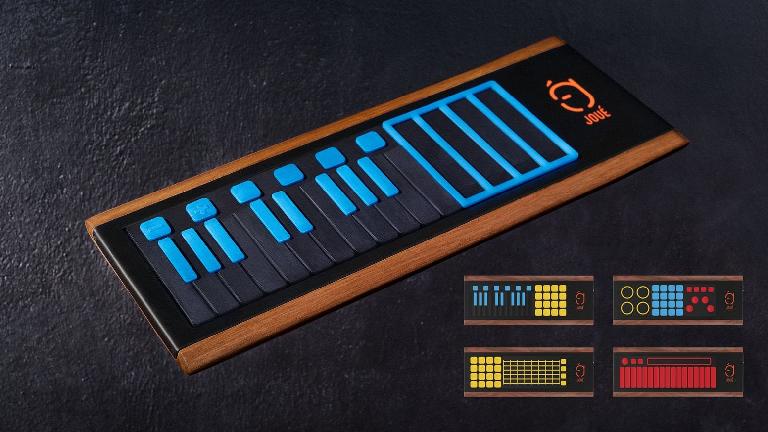 Imagine a modular synth but instead of sound modules (OSCs, VCAs etc) there’s a collection of touch modules. Joué is modular in that it comes with a collection of interchangeable, naturally soft silicone Magic Modules, and every module responds to touch in many musical, three dimensional ways. There’s a Scaler that by design will instantly conform to scales and modes. Next is Fretboard which is based upon the guitar/bass, followed by Synth, Bubbles, Pads, Area, Rounds and Strips. All the different pads feel really good and use a very natural feeling rubber that gives the proper feedback whether playing fast and precise, sliding glissandos or pressing into the pads for expression. It’s a new and tactile way to interact creatively with MIDI and instruments, and well worth checking out!

Nektar has a history of building multi-functional MIDI devices with deep DAW integration that goes beyond what many companies offer. Its Panorama T4 and T6 bring the touch and feel of hardware synthesizers to virtual instruments by providing instant access to plugin parameters from the hardware.The T-series controllers achieve this courtesy of the new Nektarine plugin control manager software. With Nektarine, Panorama users can control any VST, VST3 or AU instrument with one of the many included maps or by creating their own. Every plugin parameter change is instantly visible on the hardware display.

Together, a Panorama T-series keyboard, the Nektarine software, and Nektar DAW Control provide a powerful integrated system experience, further closing the gap between software and hardware. 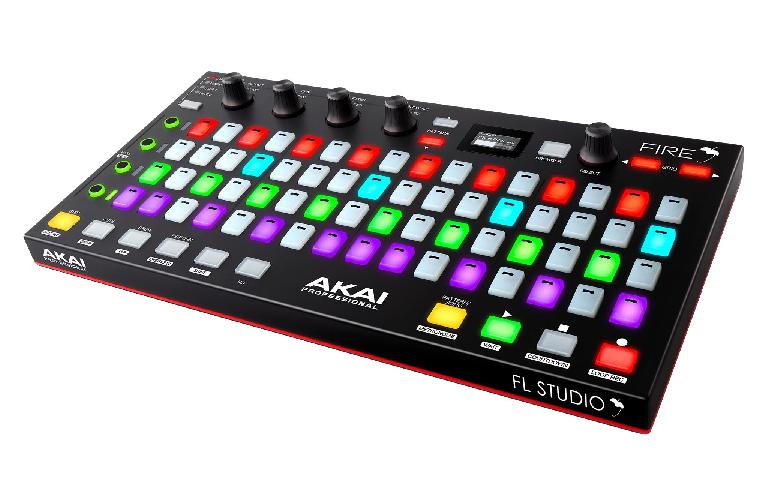 Finally - a dedicated hardware MIDI controller device for one of the world’s best loved DAWs, FL Studio. This controller is well built and compact enough to throw in your backpack and take to live shows or studios, and completely USB powered and doesn’t require any lengthy setup process. As long as it's connected and FL Studio is running on your computer, it will work. An introductory edition of the DAW is even included with the controller. There are four dedicated touch sensitive endless encoders that are assigned to control various aspects of the software like volume, panning, note velocity and so on. There’s also a user mode for the encoders so you can map any control to them directly.

Find out how our resident synth expert got on with it in the video below:

OK, so this one is a one-off, but it’s so cool we just had to include it. Sputnik is a custom built arcade-style guitar with 7 Bluetooth MIDI buttons, two MIDI knobs, MIDI motion control, a Fishman TriplePlay MIDI pickup and a Realtime Pixel Styled Audio Visualizer. Originally an Ibanez Artcore AS53, the Sputnik has several Arduino micro-controllers placed inside its body to power its additional sounds and was designed and built by Remy Sefi and David Or. As you can see and hear from the video demo it not only looks cool but sounds pretty amazing as well, allowing a guitarist to live trigger all sorts of synth sounds and manipulate them in real time, as well as playing regular guitar parts. It's a whole performance in one box. 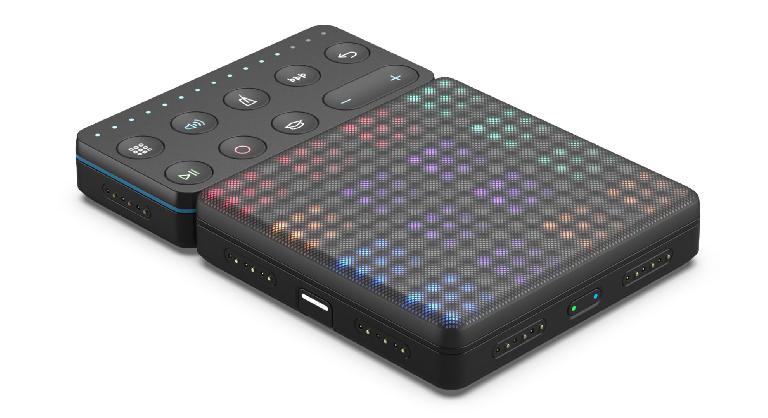 ROLI is at the forefront of MIDI innovation, embracing MPE and other advanced protocols and features before almost any other mainstream developers. The Beatmaker Kit is a hardware-software package that takes a track from start to finish. It centers on the high-powered Lightpad Block and Loop Block - two ROLI Blocks with a surface area the size of a postcard - and includes a suite of software that caters to everyone from learners to skilled producers. You get a Lightpad Block and a Loop Block, as well as a generous software bundle including Noise, Live Lite, ROLI PLAY, Equator Player, Strobe 2 Player and Cypher 2 Player for the desktop. The hardware can of course plug in to your existing MIDI hardware and software, and the system can be expanded with other ROLI hardware units. 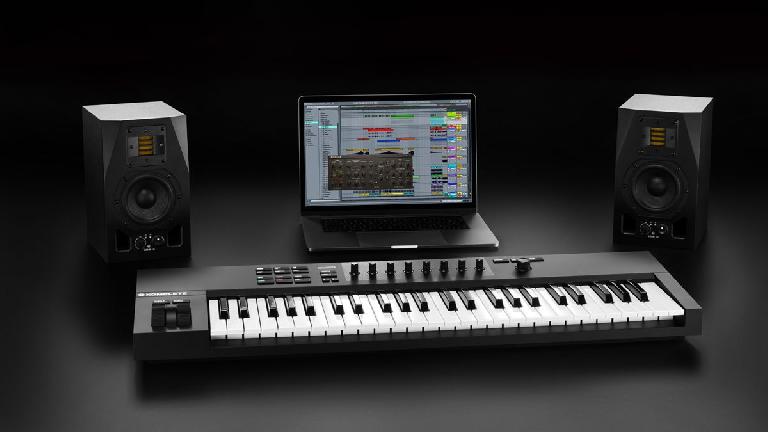 The Komplete Kontrol A series is significantly more affordable than the S series of Komplete Kontrol units. And there are a few trade-offs, but the core functionality is still extremely strong, especially given the price. Here is a hardware controller that plugs directly to your computer with a single USB 2 cable and provides access to NI’s world of browsing, DAW control, tags, previews, performance and programming.

It comes with a solid set of core plugins and instruments as well as the Maschine Essentials software, and DAW support that continues to improve. You get the touch encoders, hands-off navigation and much more. As portable MIDI controllers the A series really excels, with all the core functionality you need to perform with and control NI’s - and other - software. 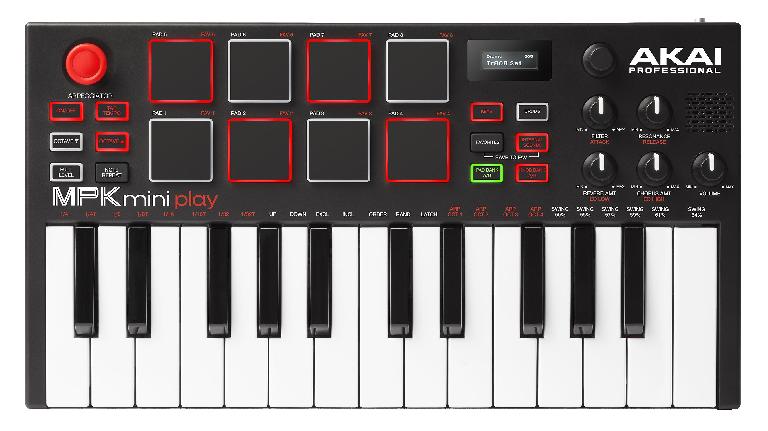 Sporting 128 onboard sounds and its own built-in speakers, the new Akai Pro MPK Mini Play brings the compact features of the MPK Mini MIDI controller with keys, drum pads and a joystick into the realm of being a standalone instrument in its own right. Not just a mini keyboard, the MPK Mini Play can also connect to a computer via a USB port for the same plug-and-play MIDI functionality as the classic MPK Mini controllers. Players can also use the mini audio output jack to connect headphones to the MPK Mini Play. When you want a bigger sound, simply connect to external speakers using the same output jack. All-in-one, easy-to- use fun with “pro” features—that’s the MPK Mini Play!

Polyend’s SEQ hardware sequencer unit got an important free 2.0 software update in 2018, which makes it worth mentioning because in addition to all the cool stuff the hardware could already do, they added a bunch more features. The most obvious feature of Polyend's SEQ sequencer is the 8-track, 32-step grid, along with a great looking aluminum and oak exterior. V 2 adds new tempo knob functionality, per-track step retrigger, new rolls behaviour, random velocity cures, roll note curve and more.

Keylab II is a major update to Arturia’s MIDI controller family. It comes in 49 or 61-key versions and both models are functionally identical except for the number of keys. Around the back is a versatile selection of ports for interfacing with all kinds of other gear - there’s USB of course for MIDI and power, with a PSU option for using the controller independently of a computer. Sustain, expression and aux pedal inputs are available for proper performance control and there’s a CV input as well as two regular MIDI DIN plugs.

You also get 4 CV outputs - pitch, gate and mod 1 and 2 which will of course let you connect to Eurorack and other modular synth gear. And then of course a wide selection of well-placed and customisable pads, knobs and faders on the top surface.  Whether you want to just plug over USB and control your DAW and soft synths or hook up to external MIDI and Eurorack gear over CV, Keylab MkII has got you covered. It can power over USB but also via a PSU, so it can be used on stage without a computer. Truly, a device for all kinds of musicians and producers. 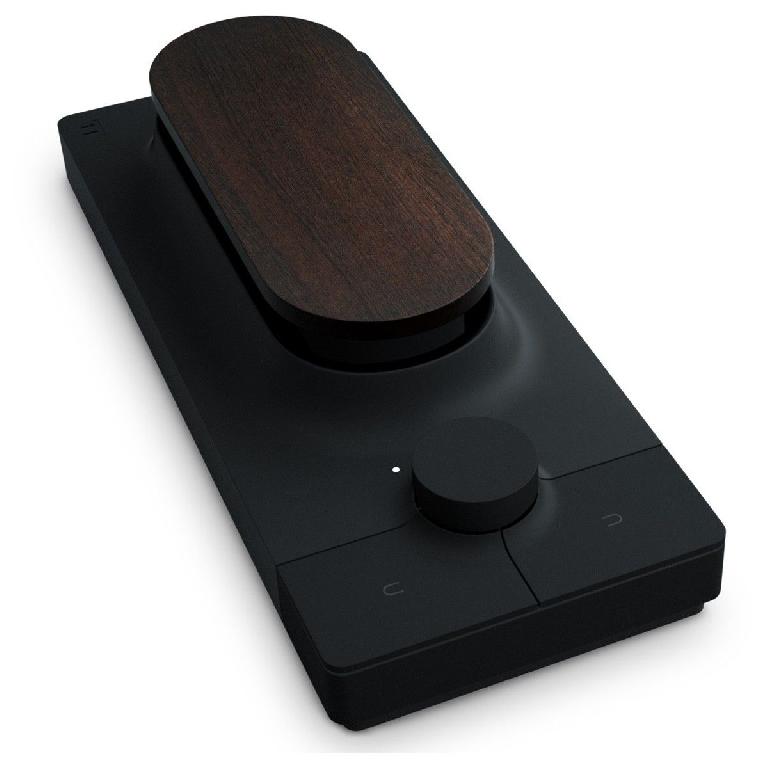 Touché SE (“Software Edition”) is a new instrument for adding expression, depth and musicality to software synthesizers and plug-ins. It responds to both the lightest and the most intense gestures, giving users immediate, intuitive control of their sounds. Expressive-E have expanded the sound library to include more than 200 factory sounds, pre-mapped to take full advantage of Touché SE’s extensive control capabilities, as well as including more than 200 presets for third-party VST instruments.

Additionally, Touché’s companion software Lié allows users to easily host and unlock the true potential of their third-party VST instrument library. Users can quickly map parameters to the Touché SE interface, creating sounds and performances with an expressive depth they may never have realised their software was capable of. 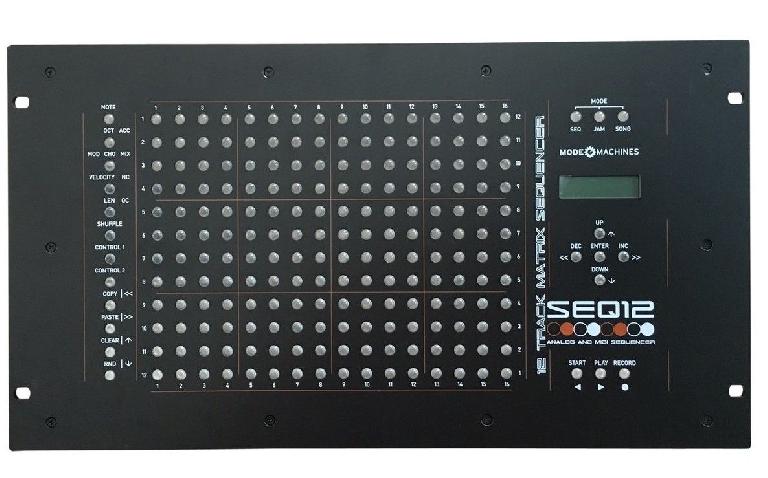 Sporting 12 tracks this CV and MIDI hardware analog sequencer gives you three modes, lets you choose between three track types and 16 paterns per track with 32 memory slots in total. It lends itself to creating and arranging pattern-based music as a live performance-capable standalone sequencing tool or working alongside a DAW (Digital Audio Workstation) to enhance production possibilities. The SEQ12 ANALOG AND MIDI SEQUENCER stores up to 32 setups. So it is ready  to be put through its interactive musical paces onstage or in the studio, thanks to its robust rack-mountable (19-inch/6 HE) design that also includes rubber feet for non-slip tabletop usage.