It's been a quiet year for MIDI controllers from the big players but there have still been some impressive new controllers released for software and hardware musicians.

MIDI controllers come in all styles and sizes. There's pads, buttons, intelligent layouts, keyboards and touch strips. Almost any configuration to control any piece of audio hardware or software is available for every budget.

Here's 8 MIDI controllers released in 2017 (well, most of them) that turned our heads at AskAudio that we have either reviewed or got very, very exicted about (listed in no particular order). 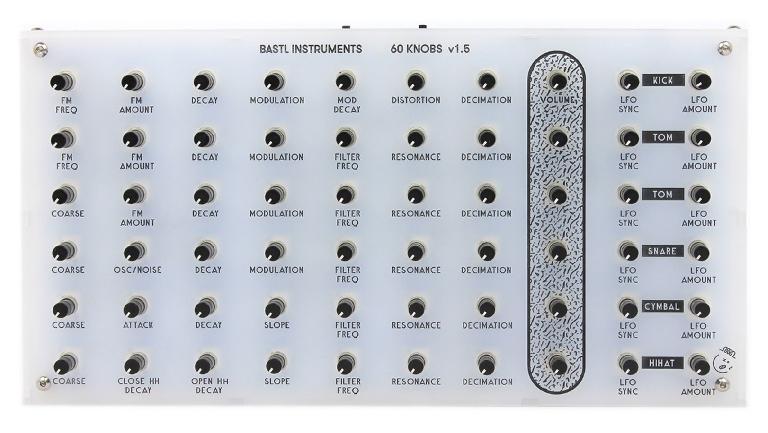 We start a list with a controller we haven't yet reviewed but are very excited about. Bastl Instruments new 60Knobs was originally designed as a controller for LXR Drum machine, but thanks to the editor can control the DX7 via SysEx and more. Priced at €129 EUR (plus €29  EUR for the enclosure).

60Knobs is capable of controlling any device with MIDI input and external parameter control possibility. Also it can handle some more tricky and less common control protocols such as NRPN or SysEx. 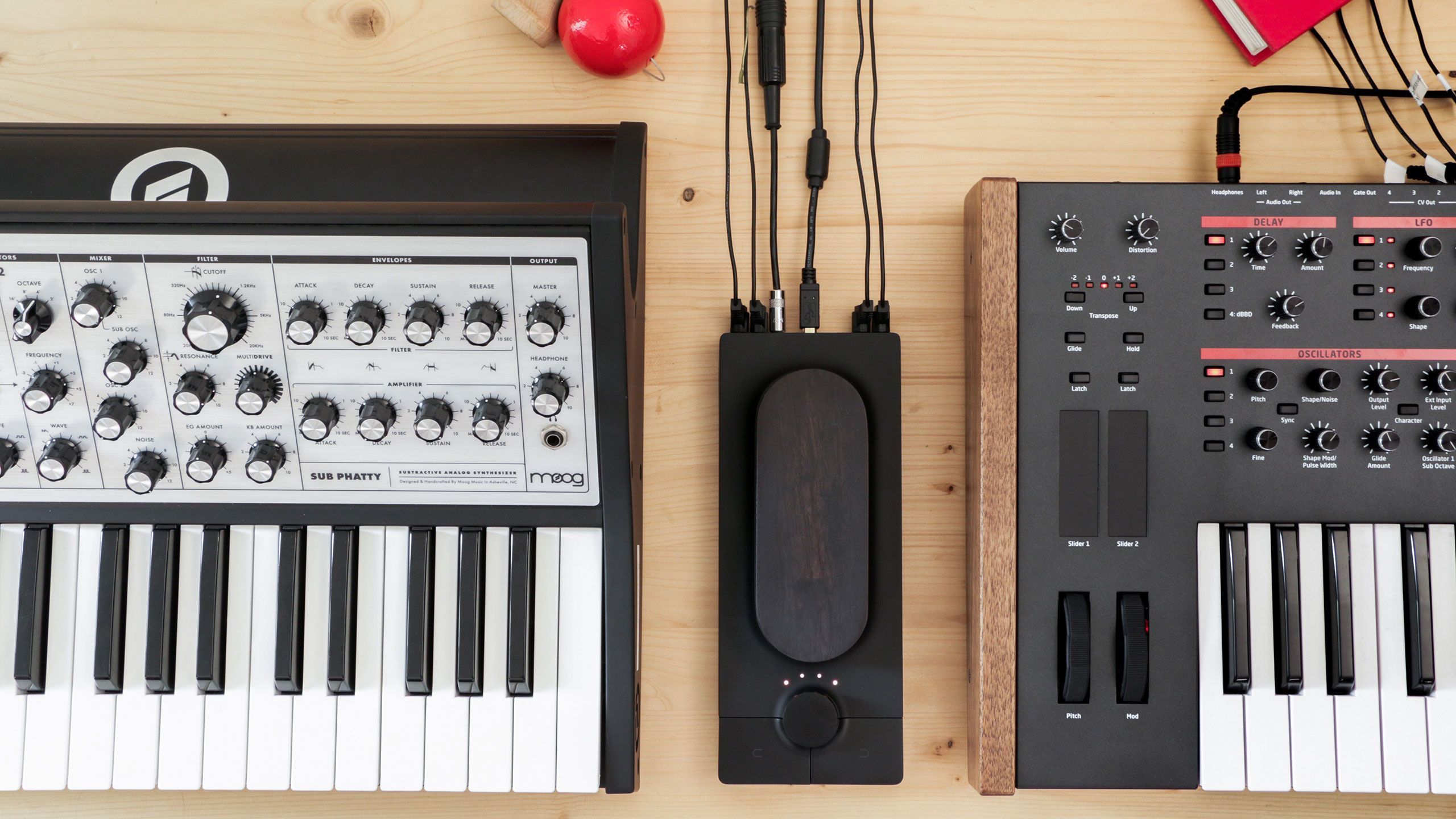 If you haven't ever seen anything quite like the Expressive E Touché MIDI Controller before, you're not alone. Touché is tactile, sensitive, and yet profoundly musical.

Touché is a physical controller that has a beautiful wooden surface that feels incredibly good to touch. The surface is seemingly suspended about an inch above the rubberized base. There is a rotary knob at the base, as well as two buttons for patch changes. The panel can detect four different dimensions of touch, and it is incredibly sensitive. There's a very wide range of expression possible - from the smallest nuance to the largest sonic punishment you wish to deal out. It connects via USB to your computer, via MIDI to your physical synth/keyboard, or via CV to a modular setup.

If you’ve ever punched arcade buttons in time with music or wished you had a little more precision in handling your virtual faders, pots and buttons, then check out the Kontrol Master from Touch Innovations.

The Kontrol Master is a beautiful, thoughtfully designed controller in regard to both ergonomics and tactile, nostalgic gratification. It makes you want to push buttons again and get in to your work regardless of whether you want to use it to control a filter bank and just rock out. Or, if you want to use it like a Dr Evil control panel complete with delete button, transport, monitor control,and even every day shortcuts, like Undo, and Redo... well, you can really feel powerful. Also, don’t forget to try the built-in pong game in the editor when you press the three white buttons together! You can use the knob to control your Pong paddle! The 80s are back!

Cons: Some of the features you'd expect are still in development. 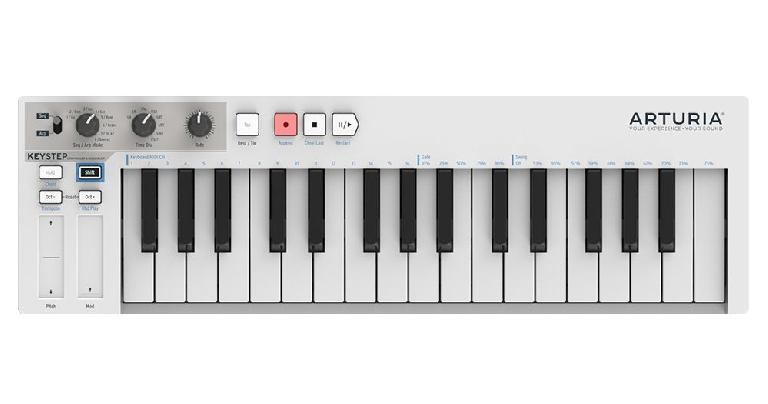 Although released in 2016, we reviewed the Arturia Keystep in 2017 to find out what all the fuss was about. If you want a playable keyboard and a strong step sequencer and arpeggiator you’d probably need to consider two separate controllers. Arturia’s KeyStep combines the two at a price point that seems too good to be true.

We haven't come across a MIDI controller in this price range with the features and connectivity that rivals the KeyStep. On top of that it’s a rugged piece of gear you’d be happy to showcase in your studio yet portable enough to use live. In a nutshell, KeyStep is a remarkably fully-featured keyboard controller, sequencer and arpeggiator for desktop, iOS and hardware synths with playable slim keys, aftertouch, CV/Gate in and out, a chord memorizer, and a useful editor in the MIDI Control Center. Arturia have set the standard for a MIDI controller with a sequencer and it’s hard to see another that can compete at the street price of $119 USD.

Pros: Polyphonic sequencer and arpeggiator, easy to setup and use, CV/Gate, chord memorizer, playable slim keys, quick and powerful on-the-fly gate and swing editing, can save and load sequences via software.

Cons: more than 8 stored sequencer patterns at one time would be useful, changing sync mode isn’t as easy as it could be. 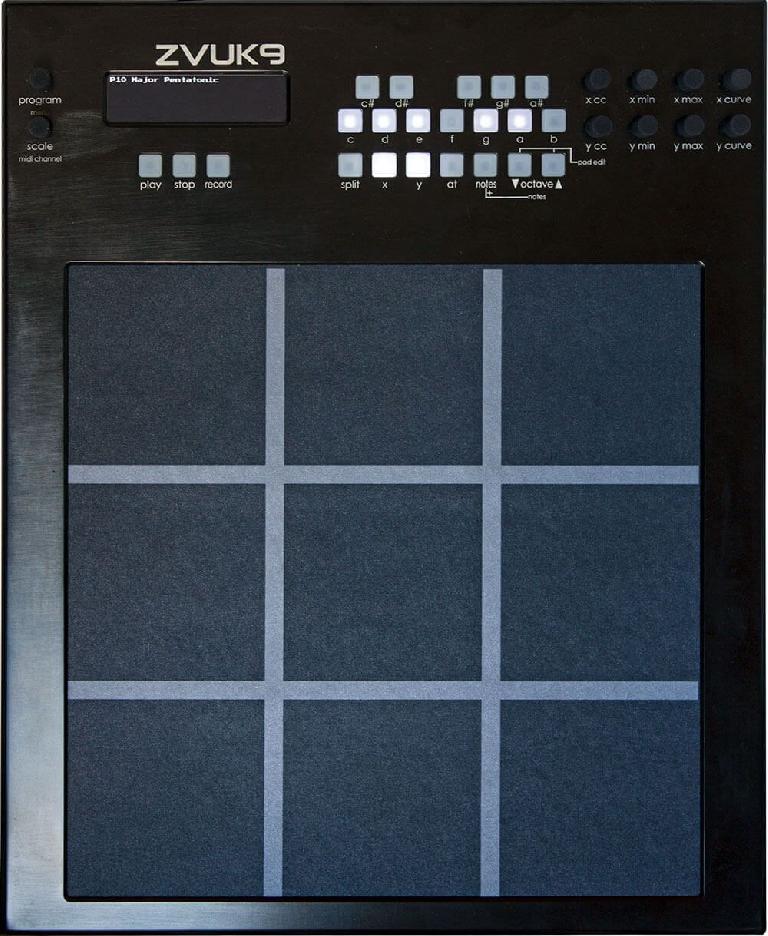 Another controller we haven't reviewed (yet), but there's no way this expressive, polyphonic controller with large pads and lots of potential isn't going into our list for 2017.

Unfortunately, we've discovered that Zvuk9 went through crowd funding but failed to raise the needed funds. However, they have allowed Igor Petrovic to open source the entire code and hardware design to GitHub. You can find it here: https://github.com/paradajz/Zvuk9

The Zvuk9's large pads can be assigned to different MIDI channels, polyphonic aftertouch, velocity, and be used with hardware synths and drum machines as well as any MIDI compatible apps on your digital and computer devices.

The fact the XY position data on the big pads can be recognized is as useful for drumming as it is for mixing in any DAW like Ableton Live, FL Studio, Logic Pro, Cubase, etc. The team behind Zvuk9 is gearing up to launch soon. And we're waiting to hear what the price will be.

Zvuk Machines failed with their crowdfunding efforts in September 2017. But the project is now open source on Github. The MIDI Fighter 64 hardware has a very similar feel to the MIDI Fighter Spectra except that it's 4 times bigger. The entire body is plastic including the sides, unlike the rubberized sides on the MIDIFighter 3D. You don’t get additional bank switches on the sides, which is understandable since there are enough buttons to never have to use bank switches, but to quote Justin Bieber, ‘never say never’. Shawn Wasabi in Marble Soda used way more than 64 samples in the entire routine so he assigned the bottom left 4 buttons as bank switches. So with that you can potentially have 240 slots for samples.

The highly popular arcade buttons feel just as good as on the smaller MIDI Fighter. The RGB LEDs are super bright and are visible through the rings around the arcade buttons. Midi Fighter 64 can work with any software that accepts MIDI Note ON/OFF messages though it's more popular and convenient to use Ableton Live.

Midi Fighter 64 is a great nostalgia-laced controller that is limiting in many ways but also equally rewarding. Great for mashups, finger drumming and creating visually exciting performance routines. It's priced a lot higher than a Launchpad Pro but considering that is is not mass produced in a factory in China the price is reasonable. I was expecting it to cost four times that of the MIDI Fighter 3D, but it's a lot less than that figure.

Cons: A tad pricy. Only two color options for the hardware (white is already sold out).

Polyend SEQ belongs in a slightly different category to the other MIDI controllers here. List this one under: ultimate sequencer, polyphonic sequencer, dream sequencer. Take your pick!

We're in the process of reviewing SEQ and are finding it hard to drag outselves away from playing with it and the new features in the recent 1.3 firmware update to actually write anything. Yes, it's that much fun.

In a nutshell, SEQ is a hardware MIDI sequencer that can connect to virtually anything and is easy to set up and  create rhythms, chords, and melodies. Most functions are available directly from the front panel and did we mention it's an absolutely gorgeous object to have in you studio? Oh, the important stuff: it features 32 steps, 8 track polyphony, 256 pattern storage  with multiple connections for your hardware and software devices.

There is one caveat for this high quality hardware sequencer. It ain't cheap.

More on the 1.3 update: https://ask.audio/articles/polyend-releases-seq-hardware-step-sequencer-13-update

Free video masterclass with the makers of SEQ: https://ask.audio/academy?nleloc=course/2710/polyend-seq-masterclass OpenDeck platform is specifically designed for making MIDI controllers without needing to do any electronics or coding, and it is comprised of a hardware board and a web-based software editor.

Based on my (Liam Lacey's) previous experiences around MIDI controller development, using the OpenDeck platform has definitely been the most straightforward process of building a DIY MIDI controller. The hardware board provides a large number of easily accessible inputs/outputs for connecting controls and LEDs, and the software editor offers a level of usability and configurability beyond that of other DIY MIDI platforms.

There are a few minor bugs and issues with it, but most could easily be fixed with firmware and Web app updates; even just within the time I spent testing OpenDeck the developer issued a couple of updates, and it was great to see the platform being so well maintained. Unless you’re willing to build circuits and write code, OpenDeck is the most affordable and flexible platform for building your own custom MIDI controllers quickly and with ease.

Learn all about MIDI, the history, its uses and practical applications in the studio and when performing live in the Ask.Audio Academy: https://ask.audio/academy?nleloc=topic/midi