Language
2016 was the year that eurorack and modular synths finally broke into mainstream music producer consciousness. While that's not what every synth nerd wanted it's been positive for the makers.

Unlike our other "Best of" lists for 2016 some of the eurorack synth modules in this list haven't had a dedicated review on AskAudio... or the review is pending or on our wish-list. As you can imagine there are so many modules available and only so many hours in a day to try them out.

Anyway, with the advent of the incredible success of Superbooth in Berlin earlier in April this year, eurorack and modular synthesizers have solidifed their position as the cool kid of the music technology world.

Here's some of our favorite eurorack and modular synths from 2016 (in no particular order): 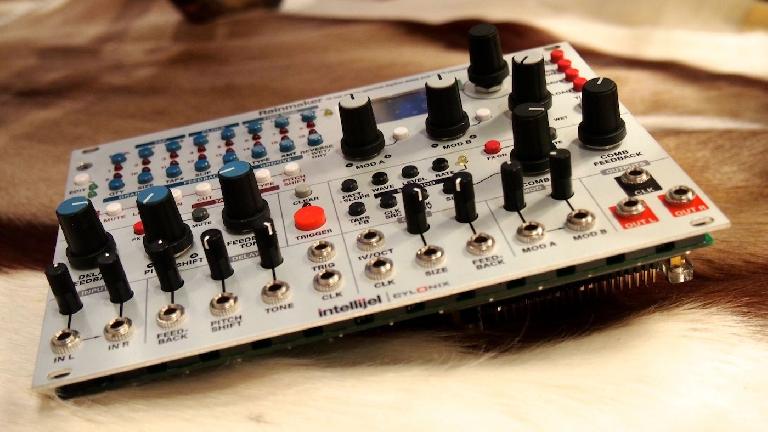 Intellijel/Cylonix Rainmaker is a 16-tap stereo spectral rhythm delay and comb resonator in eurorack synth module format. But due to its vast feature set is so much more than the sum of its parts.

Rainmaker is a piece that offers a lot of room to grow into and may offer new discoveries for years to come. Depending on your priorities, the biggest advantages of the Rainmaker may be perceived as disadvantages. In order to accommodate the power and flexibility of the module, an array of controls and menu pages are necessary to fill the layout, and naturally it has a pricetag to match. I think they did a good job of making the most of the space, and keeping the price reasonable, but at 36HP and $639 US it will take up a good portion of a rack and possibly your grocery budget. I can definitely see the Intellijel Rainmaker becoming an essential module for many modular users.

Cons: Lots of features means lots of menu diving, Creating something from scratch can be quite time consuming, larger rack real estate 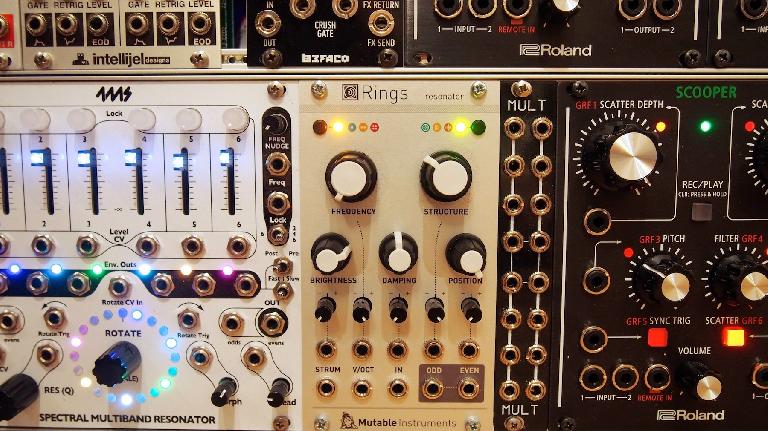 Rings from Mutable Instruments is a physical modeling resonator eurorack synth module with a healthy dose of joyful surprises lurking in its patch points and parameters. It’s designed to mimic the resonant behaviour of vibrating bodies like metal bars, plates, strings, and more, with the ability to blend and bend their attributes. Controls are available for Coarse Frequency, Structure, Damping, Brightness and Excitation Position. Each of these parameters has an input with a handy attenuverter to control the amount and polarity of external modulation, making it easy to integrate with other modules.

For the size and price, Rings offers a huge level of flexibility. The alternate modes are not just thrown in gimmicks, but compelling useful additions. I started using Rings thinking it was a pretty specific niche product perfect for my system, but I really think any rack would benefit from having it as part of the arsenal.

Pros: Works as a sound source or an audio processor, Full deep bass and a bright glassy top end, Very musical and easy to find sweet spots, Attenuverters on each CV input, Alternate modes and an easter egg add even more flexibility.

Cons: Mono input, A temptation to want to use it on everything. 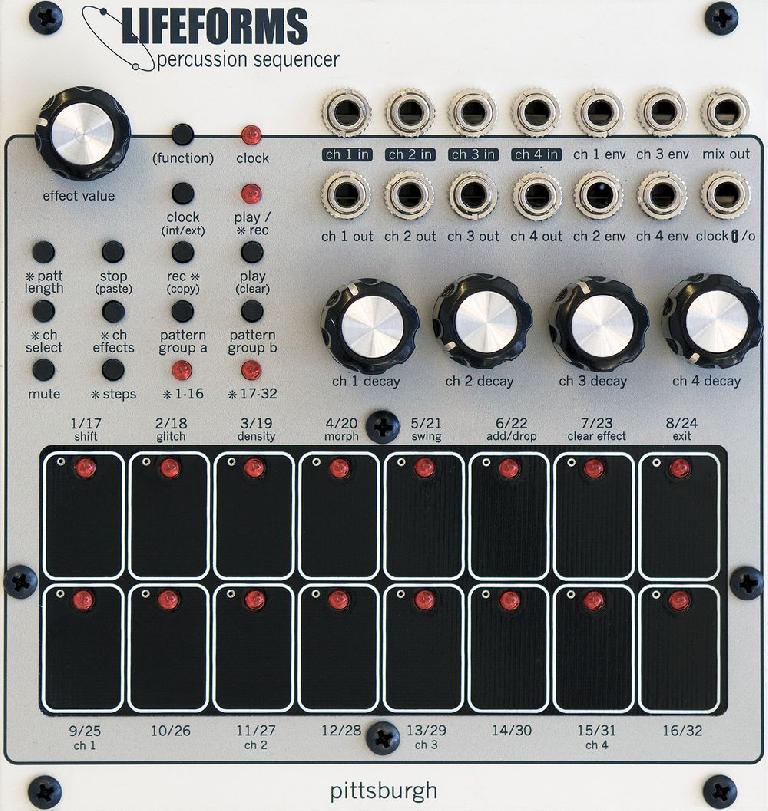 With a suggested retail price of $349 USD, this new module hits at a price point that should make it a staple of any Eurorack setup. Stay tuned - Ask.Audio will be reviewing this unit as soon as we can get our hands on it! 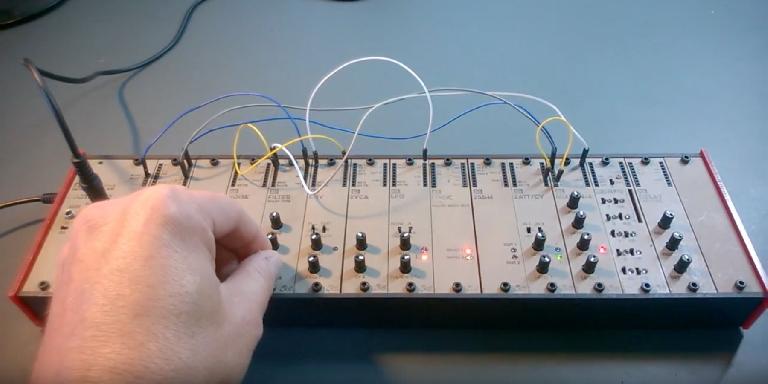 AE Modular describe their synth which smashed through its Kickstarter goal in November 2016 as "a true analog modular synthesizer - small in size, small in price, big in sound." And before you ask, AE Modular is not eurorack compatible. Instead the creator, tangible waves, have created a system which they say makes it affordable and smaller than most eurorack format synths.

They've gone for "character" over "perfection" too. "Circuits are sometimes simplified and show their own character in some points - it's intentionally a contrast to the high-polished stuff we get from digital synths / DAWs / plugins. But always the usage as an artistic tool is considered!"

The modules in detail:

If you're interested visit their Kickstarter page here: https://www.kickstarter.com/projects/562102529/ae-modular-a-modular-synthesizer-for-everyone?ref=category_recommended 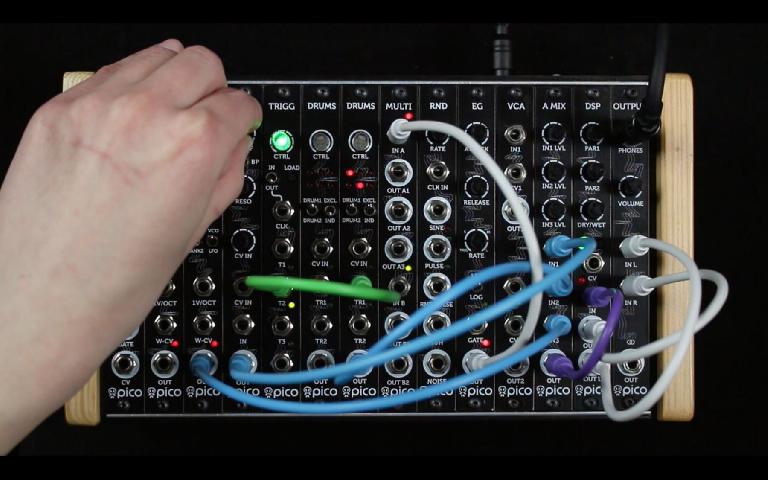 Talking about small... Erica Synths Pico 1 is now available and holds claim to be the smallest modular synthesizer in the world (with its high level of functionality). It contains wisely selected modules so that beginners are introduced with basics of modular synthesizers and advanced users can play hours long live gigs. The Spectral Multiband Resonator from 4MS provides an innovative new spin on the filter bank concept with features like rotation, scale quantizing and a host of other attributes. For someone like me, who enjoys making music using field recordings, this module offers a perfect means to convert noisy material into something musical in an enjoyable and intuitive way.

The Spectral Multiband Resonator is a unique and well-designed module that sounds great and is a joy to play with. It can be used and controlled in a multitude of ways and rewards active tweaking of the controls. However, the implementation of the scales places a roadblock on the scope of its use. Clearly this module will not resonate with everyone, but what module does? No, not even Maths. Or Disting.

Cons: Odd implementation of scales. Prone to distortion if pushed too hard. 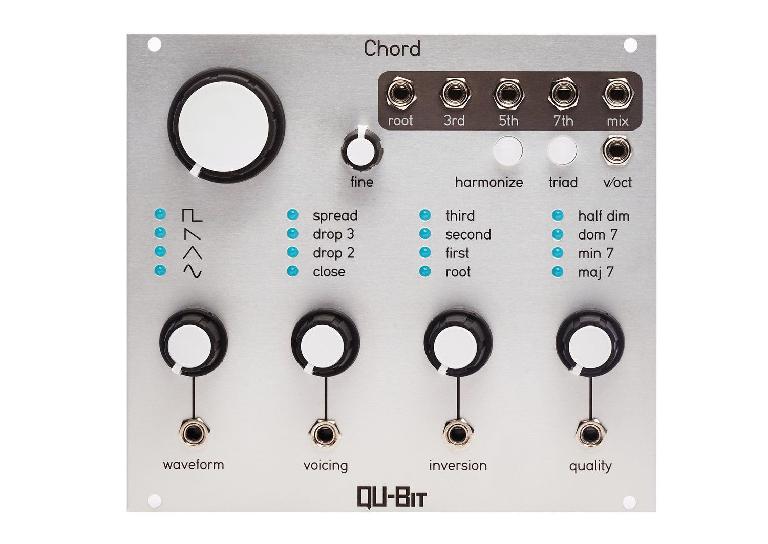 Qu-Bit Chord is a plug and play solution for bringing musical polyphony to your system. It is a four voice oscillator with individual and summed outputs. All voices are tuned together, allowing for quick and easy sequencing of chord progressions.

In addition to its robust synthesis engine, the harmonize function can choose appropriate chord types based on an incoming bassline at the v/oct input. From harmonic drone to Switched On Bach, the Chord is an unparalleled addition to any Eurorack modular.

QuantiZer is a creative melody composing module that uses cutting-edge analog electronics and DSP to tune analog VCOs precisely into Western musical scales. The front panel is packed with functions that make it very playable and intuitive to use, with a layout  that moves forward from the typical quantizer design. At its center is a slider that can be set to play notes, add portamento to an incoming sequence, transpose a sequence within an octave range or transpose a sequence within 5-octave range. The 12-note keyboard can be set to play notes manually, add and subtract notes from scales, transpose a sequence as well as set up a variety of settings that define the quantizer behavior and sync with other modules.

Major and Minor keys are both built in to let you switch scales in a very playable way, making it pretty easy to explore musical progression. There are also 24 user scales ready to be filled up with your own custom scales.

A built-in sketch pad records and plays back keys entered manually on the keyboard and slider in sync with external clock and reset signal, or Tiptop’s SyncBus which chains the Quantizer recording function to the Circadian Rhythms time line for precise recording and playback.

Scale CV in can be set to switch between changing scales or transposing pitches using CV from sequencers.

Quantization can be set for free run or Trigger mode for even more interesting ways to interact with external sequencers. 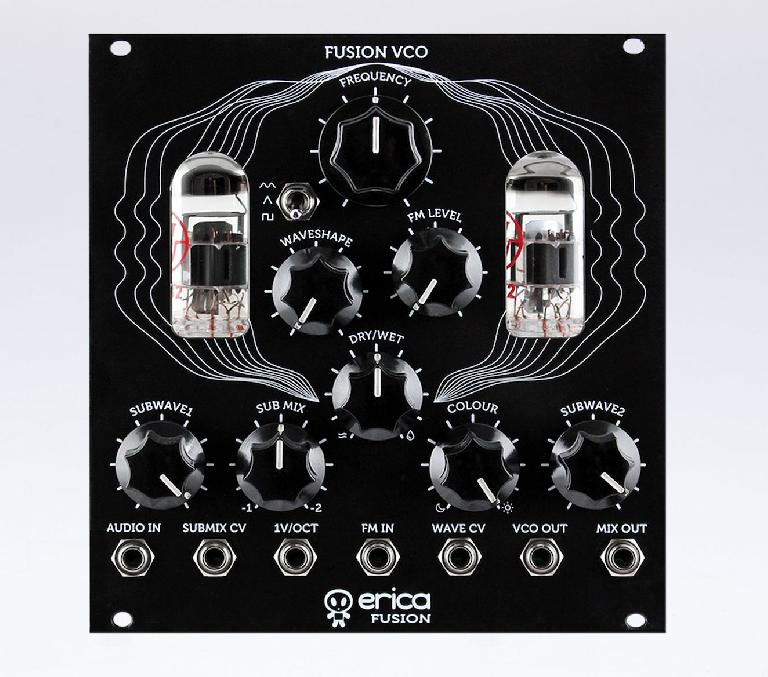 You can incorporate the Erica Synths Fusion VCO module into any eurorack setup of course, though it’s been designed as part of the Fusion Drone system, which combines several matched sound generating and processing modules together in a special unit. Although I haven’t had a chance to play with the whole thing, on the strength of this VCO portion of the system it would be incredible.

The Fusion VCO—whether mixed and matched with other rack gear of with other members of its synth family—is a gorgeous sounding module that encourages experimentation and provides you with controls that are friendly and won’t blind you with science. The addition of the tube-driven subs adds a whole new depth to the sound, and introducing some FM or other CV in and tweaking shapes and blending mixes using the knobs is highly creative and produces some great results. As a VCO module you’ll need to own some other kit as well—this isn’t really a one-box instrument. But with the growing popularity of modular gear, Erica Synths’ products stand out as well built, great-sounding and truly unique.

Pros: Sounds amazing. Easy to use. Subs add a lot of depth and character. Route CV in and out easily.  Control shapes, waves and mix. A powerful source for any modular setup.

Cons: More a consideration than a con: remember it is modular and not standalone. 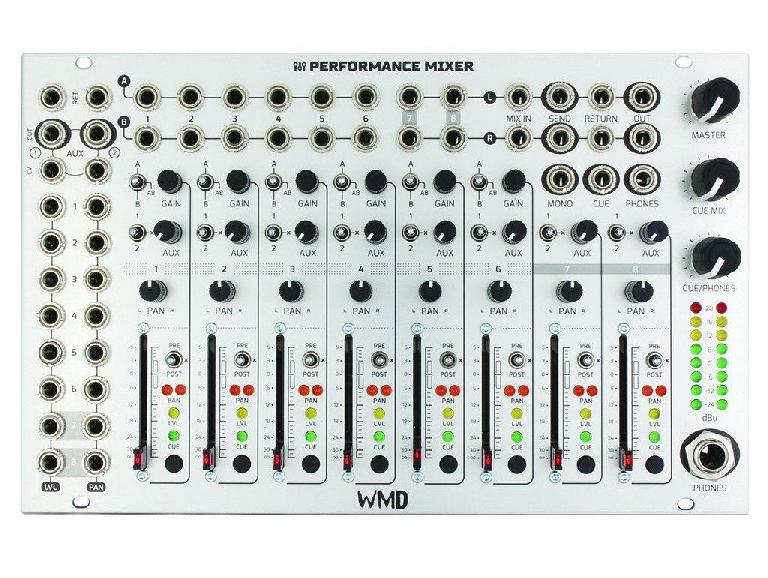 WMD Perfromance Mixer is an 8 channel powerhouse designed to change the way people perform live with their Eurorack systems. It's certainly going to be interesting to see how many Eurorack synth performers incroporate this into their setups.

Although we haven't got hands-on with this yet, it's on our radar and we hope to have a review sometime in 2017. 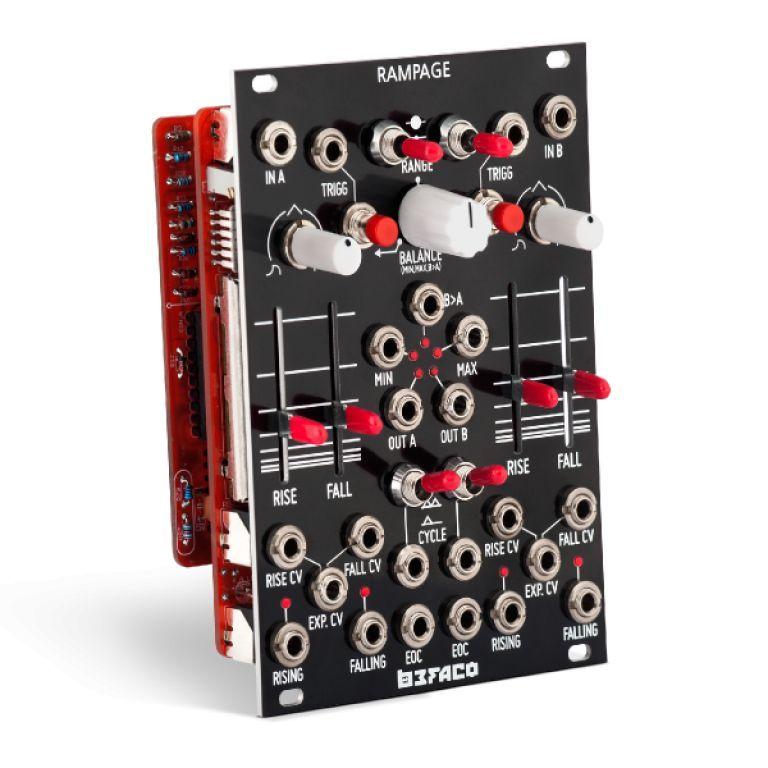 Befaco introduced a new ramp generator module in 2016. Based on “an old invention” they go on to describe their new Rampage as follows:

"We took the idea of a “patch programmable” function generator/processor, put two units in the same module and tried to expand them with new funky functions and ways to combine them: Slope detectors, analogue logic functions and a few extra outputs to add some more complex features.

Befaco Rampage retails for around €265 before tax. Since the success of DRM1 and and the Kick Lancet, Vermona have taken their expertise on electronic drum sounds to Eurorack modular systems with twinCussion.

twinCussion is a dual channel drum-synthesizer module. Its components are explicitly designed to create percussive sounds while its flexible interconnections make it a must-have for rhythm based modular systems.

twinCussion offers two sensibly structured sound engines, each consisting of an oscillator (complemented by a noise generator in engine 2), a voltage controlled amplifier and an envelope generator. Both sound engines can be used independently or being combined for more complex sounds. The internal structure can be edited and expanded at will, thanks to the multiple in- and outputs being available.

twinCussion is a versatile sound chameleon. Although its sound engine is specialized in electronic drum sounds, it is not limited to specific instruments of this genre. This module generates pushing bass drums, prominent snares and chirping hi-hats with ease. And there is much more to twinCussion if using a little creative patching. Unleash numerous sounds like wooden clicks, metallic pings and a lot more.