Behind the Scenes at Livid Instruments

Language
Do you use (or lust after) Livid Instruments' many controllers/instruments? Have you ever wondered how they are made, and by who? What's it like inside Livid HQ? We snuck in to find out...

I have a few regrets when it comes to road trips. There have been two trips where I was an hour from the Grand Canyon. But, I decided to check it out 'next time'. I've lived in Hawaii, where some of the most beautiful water in the world is. I had always meant to go scuba diving there. After three years of putting it off. Well, it never happened.

Recently, on my trip to Austin, I got an opportunity to visit the Livid Instruments home base. And, this time around, I wasn't about to add missing out on an opportunity to meet the brains behind some of my most favorite controllers... Ever. Especially since I really had no idea what to expect.

How was it? Read on!

When we pulled up to front door of Livid, my excitement was pulsing in my temples. My girlfriend, Pam and I quietly opened the front door in hopes that we wouldn't disturb someone soldering. Yeah, as if they actually solder here... Well, as we came to find out, they actually do!

Entering in to a quiet lobby, we were immediately greeted by the famous instruments that really started Livid. Instruments I'd heard about in passing. You know, when reading articles, and so on. Now, I could touch them. 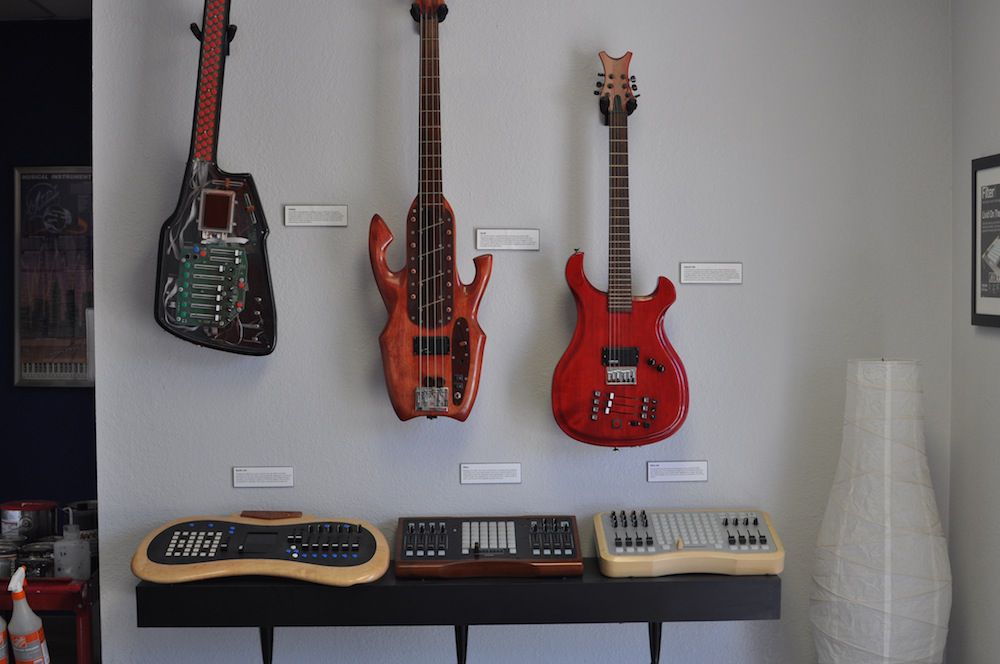 The entrance lobby at Livid Instruments in Austin, Texas.

We rounded the corner to the main office for Livid. And, indeed it was the main office. 4 people, crammed inside an office that's smaller than my bedroom. 4 people working frantically! After a nervous 'hello', Jay Smith, the big cheese of Livid was swiftly on his feet shaking our hands and extending the kind of warm hospitality one expects when traveling through Texas. I even got to meet Rachel, the kind lady who has guided me through more than a few Livid product questions over the phone. Everything was coming full circle!

Quickly, our tour began. And, believe me, it was magical.

I've visited more than a few music companies, at this point in my career. Though, on most of my visits, I've always sort of been a little disappointed to discover that none of the equipment would actually be built within the walls of the corporate headquarters. No, the manufacturing is always done overseas. The American offices would merely house marketing guys, and executives, and so on. This is not the case with Livid.

Remember the small office I mentioned? Well, this is the corporate wing of Livid. The rest of the shop (which is near the size of the average family home) is all manufacturing.   Is it a small facility full of robots? Actually, the facility is only half full of robots. And, the robots are as homemade as the rest of the Livid products.

In one room, you have the robot that's dedicated to laser cutting metal for the faceplates, enclosures and so on. 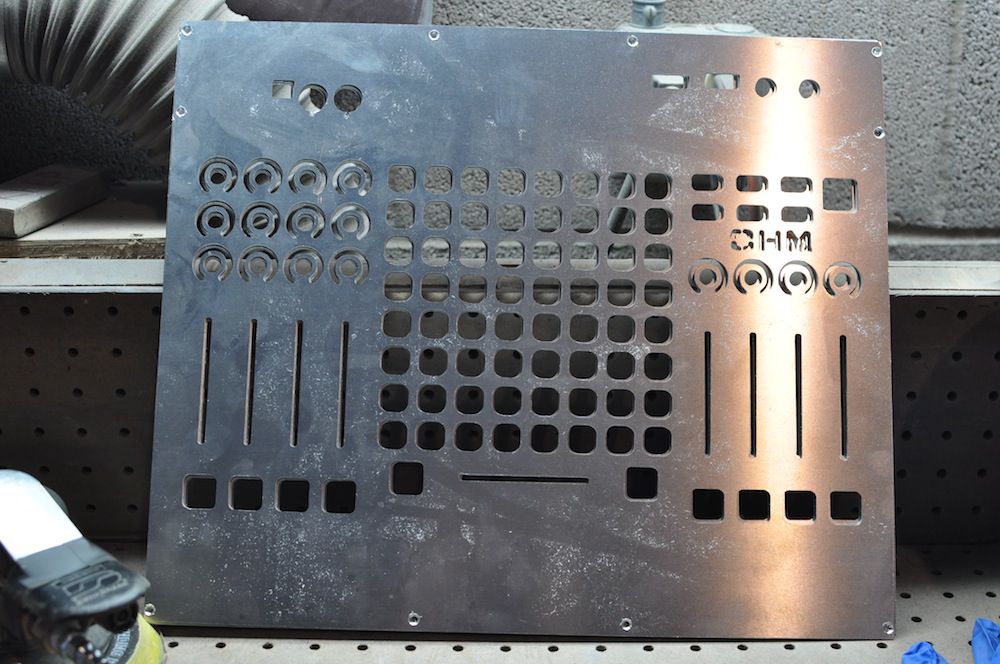 Recognize this? Yup, it's the faceplate for the Ohm 64.

Another room is dedicated to another robot that works with the wood siding. 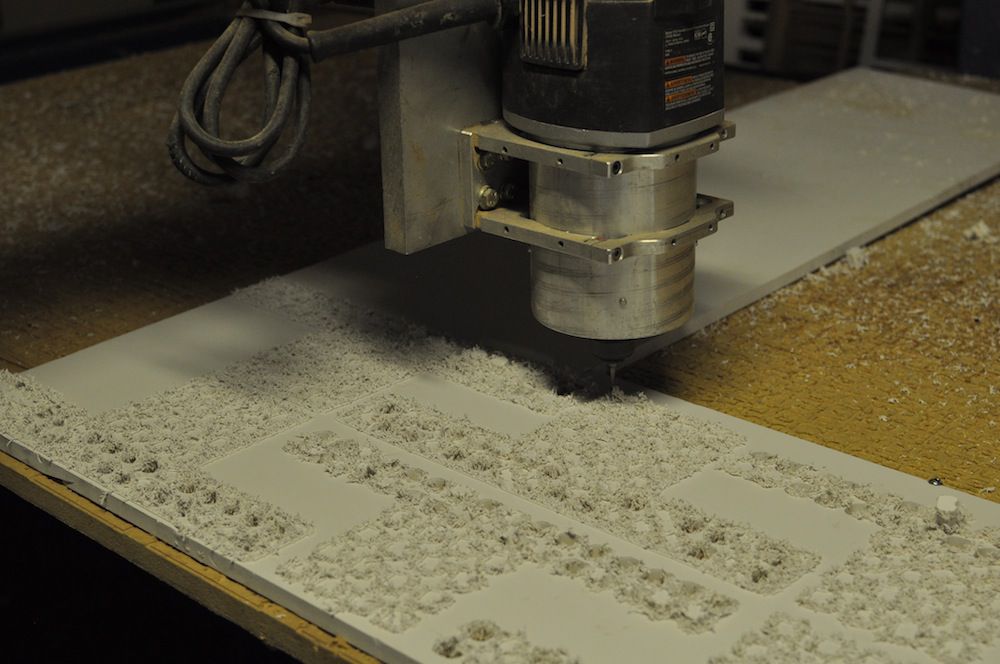 The robots deal with the external aspects of Livid devices.

And, though the robots take care of the exteriors of all the Livid devices, it's the people that handle the soldering, wiring and overall manufacturing. It really reminded me of what it might have been like being in the first days of the Ford Motor Company. The room was filled with a vibe that just said, “I'm passionate about what I'm doing, right now.” 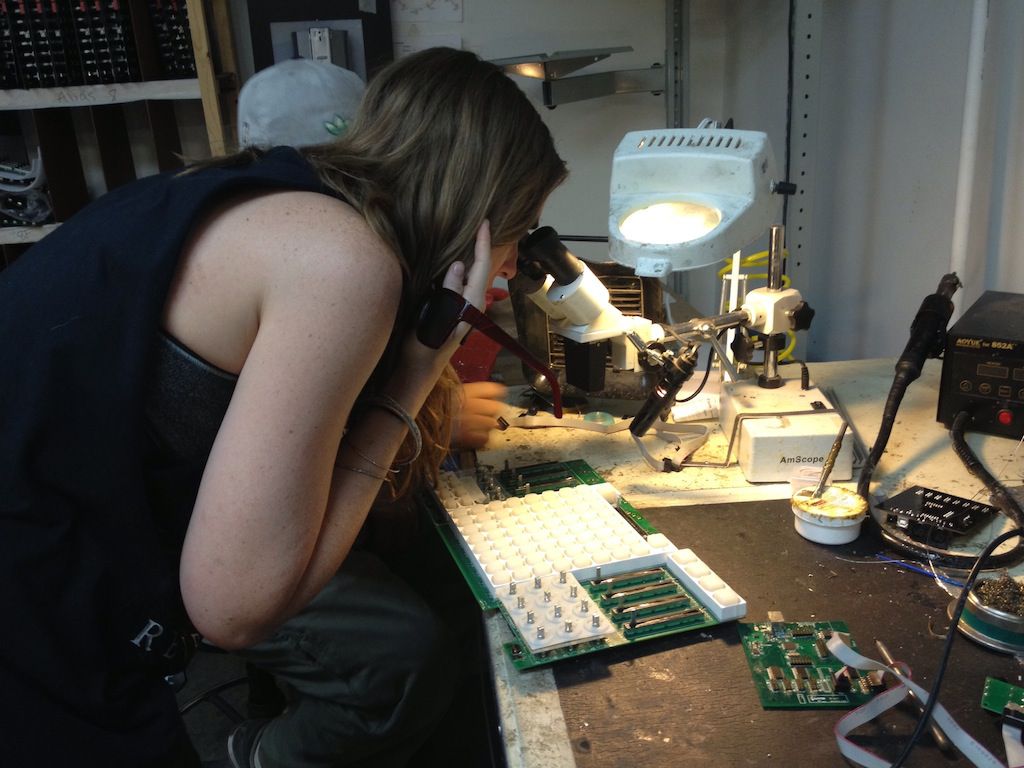 There's a passionate and dedication to detail that is apparent within the Livid team.

In the main assembly room, Jay showed me the boards that are found inside some of their products, like Base, OHM64, Alias8, and so on. 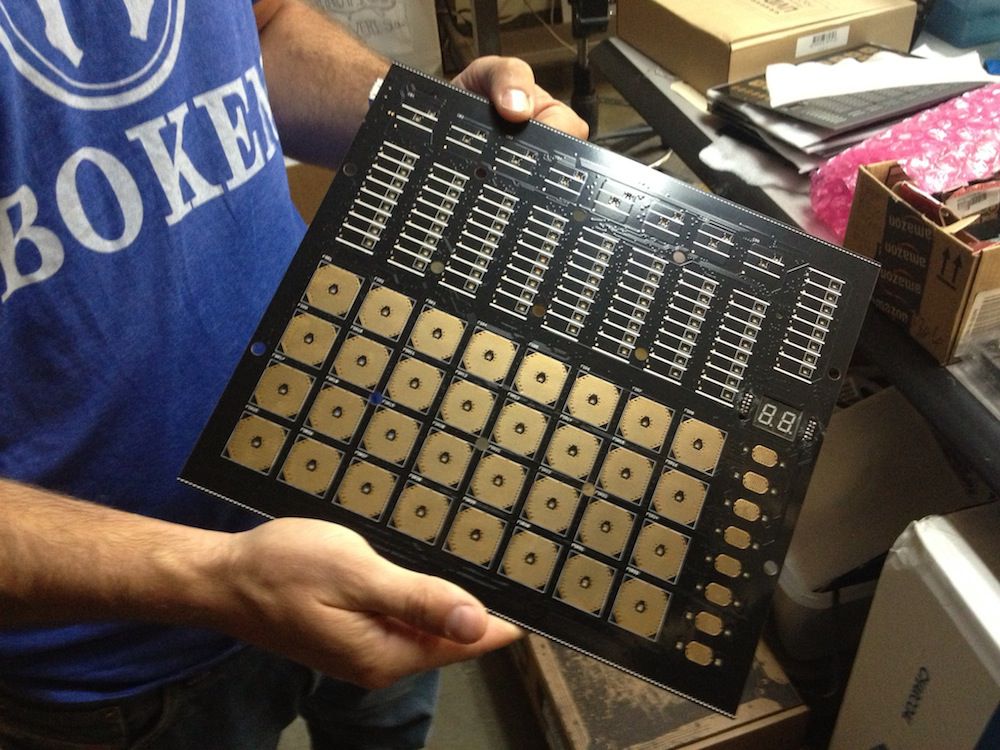 The boards in the main Assembly room.

And, we got to watch some of the guys working slowly, and diligently building MIDI controllers. In all honesty, it was the calm and steady pace that really made me understand what makes these controllers so solid. Everything is made slowly, and carefully. Everything made in here, regardless of the price tag, is made with the same attention and care. And, this is how I've always wanted to imagine musical gear being pieced together. Finally, I got to see what was in my imagination, in action.

Even during our tour, Jay would stop, handle a call, and then get back to us. These guys are always busy!

Back To The Lobby

As we finished up the technical end of the tour, we moved back to the lobby. The small cushions that lay atop the meeting table chairs were adorned with what appeared to be silk screened t-shirts that appeared to be old Livid Logos. 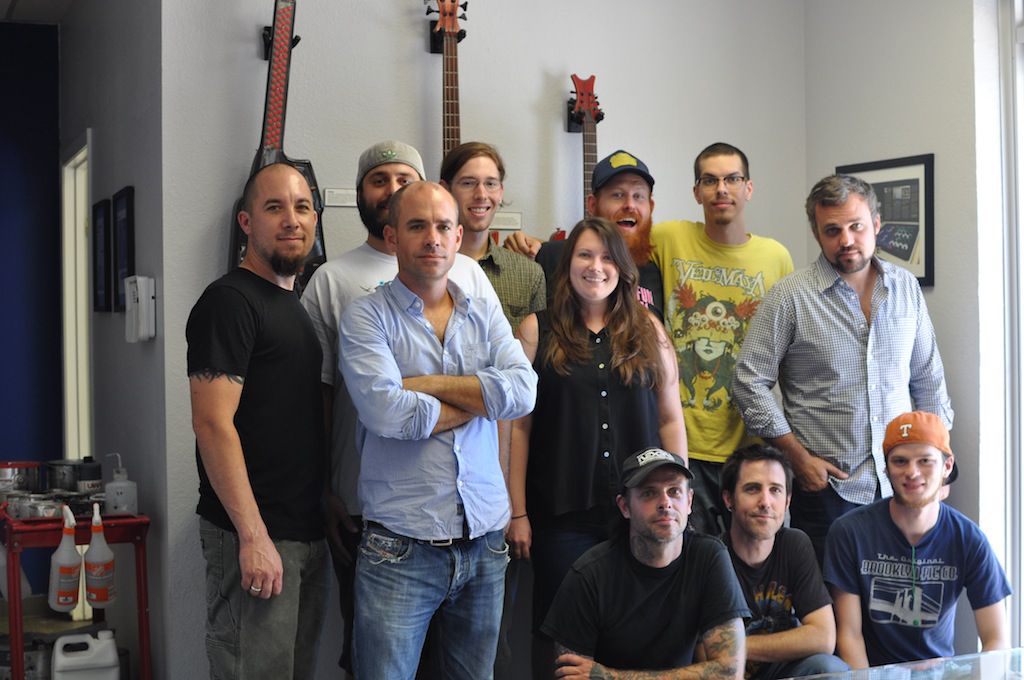 The team responsible for your Livid controllers. Happy bunch, aren't they!

It was here that Jay gave us a little bit of a history of Livid. To sum it up: Jay (Smith) came up with Viditar (as he's telling us about it, I'm actually staring at the very first prototype), a guitar-looking device that is used to trigger samples and video.

During this time, Jay also met up with Peter Nyboer, a Max MSP bad ass, who started working with Jay on the Viditar Software. Shortly after, Jay met up with Travis Redding, an instrument maker and creator of the Zynth (also hanging on the wall), and they began collaborating.

It's these guys that formed the core of Livid, and it's through their work that the company has grown in to what it is. And, after seeing and hearing more of the history, and as I began moving towards the exit, I found myself more than impressed... I felt inspired. After all, Livid have also provided more than just great controllers, they've also provided the means for you to create your own, through Brain Jr, Brain, a healthy DIY shop with more than enough knobs, pots, and buttons to create a controller that could come from anyone's imagination. As I drove back from Austin, I couldn't wait to get home and start working on some of my own ideas.