Language
Universal Audio's original Apollo and the Apollo 8p are both fine pieces of equipment, but which one had the edge when they went head to head?
All Photos in this article by Mike Dwyer.

Recently, some friends from Clubhouse Studios in Rhinebeck NY and I were able to check out the updated Universal Audio Apollo 8p directly alongside the original silver Apollo. We set up in the live room and took a look and listen - comparing them both inside and out. Here are a few of our observations.

The original Apollo, released in 2012, was a platform that allowed for seamless integration of hardware and software. The 1RU interface featured a variety of I/O options to get you in and out of your Mac or Windows DAW, and featured onboard DSP processing for UAD-2 software plugins. With their Console software you could track with near zero latency through the interface and use Unison technology, which allows certain UA software plugins to behave just like hardware. 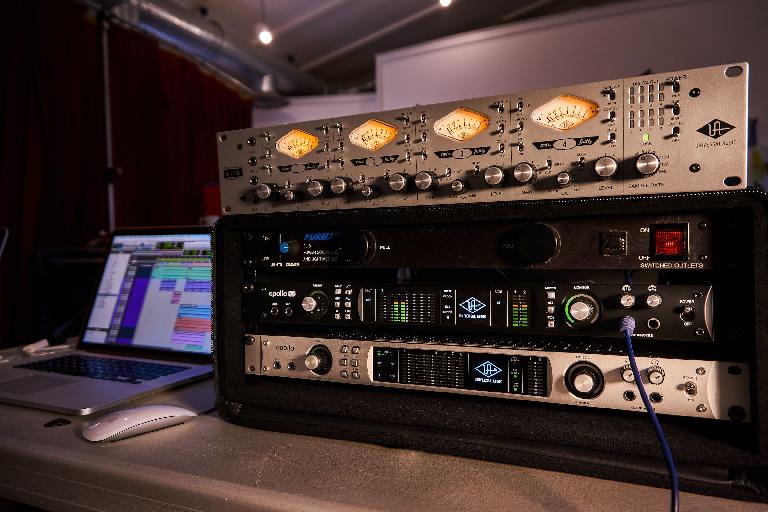 The latest generation of Thunderbolt 2 equipped Apollos, with their polished black front panel, feature updated 24-bit/192kHz AD/DA converters and all new analog circuitry. On paper at least, that translates to lower THD (total harmonic distortion) and an increased dynamic range.

Additional differences include front panel Alt Speaker button, Dim and Mono available via use of the FCN (function) switch. By selection the new Meter switch, you can choose whether the Channel Level Meters display Input or Output. What I like the most is the ability to now see sample rate on the front panel (44.1, 48, 88.2, 96, 176.4, 192kHz) and the Host indicator displays the status of the Thunderbolt connection to your computer. The Meter indicator will display whether you have Input or Output metering selected.

Also, the Console software was redesigned and V2 had extra features such as the ability to drag and drop plugins (thank you!), resizable windows, channel strip presets and more. 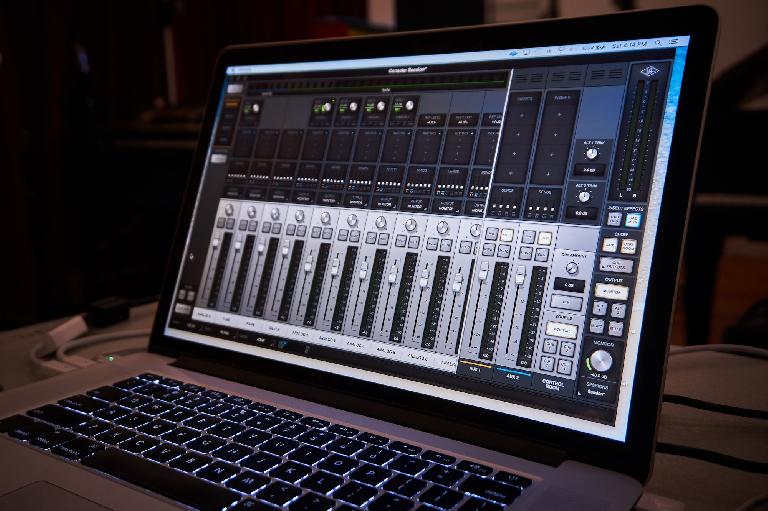 From a visual point of view, the new 8p is a definitely a meaner looking unit.

Aside from the cosmetic changes, we were most interested in the sound difference between the two. Would we notice these differences at all, and if we did, what would we hear?

To do our best fair comparison, we put up a super clean Earthworks QTC-50 omni mic on the studios 1922 Steinway and muted the channel in the control room. Running into Pro Tools at 24-bit 48kHz, we used the Apollo 8ps first preamp for the DAW’s channel 1 and the original Apollos first preamp for channel 2. 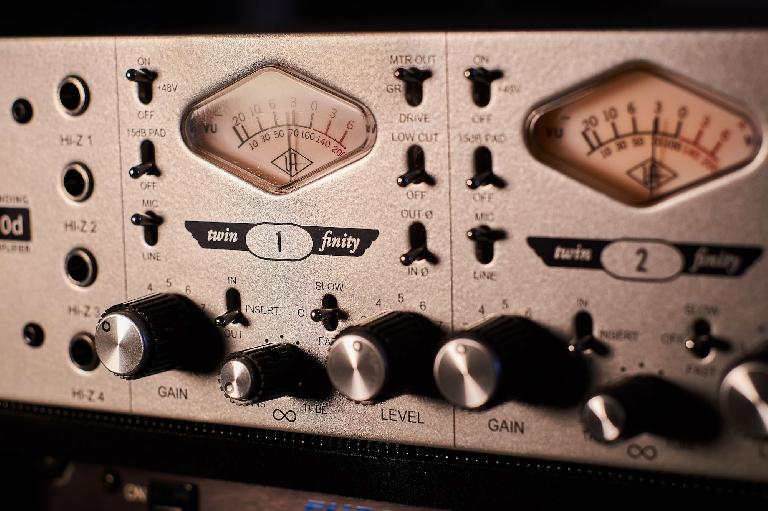 We did our best to adjust the levels to get as close to each other as possible. While this wasn’t a fully scientific comparison, we felt our approach would let us hear the differences. Playback would come out of the 8p in the live room into a set of full range Genelec 1032b’s.

Pianist Ru Kojo Lemer from England, who has a nice touch, played a variety of styles on the old Steinway, making sure to move up and down the keys enough for us to hear a balance of lows, mids and highs.

The first playback was from the original Apollo, which we were all used to hearing. Then we played back the 8p. To our ears, and this was five of us, we all heard more top end and a smoother bottom. It was a sense of air and clarity that the silver Apollo didn’t have. Then we played the 4-710d all tube channel, which sounded far more like the 8p than the original Apollo. To our ears the tube channel had a big wide bottom response and the top was a little softer than the 8p. It was definitely crisper than the original Apollo. The all solid state channel had more of a tighter midrange than the others and the top and bottom was less pronounced than the 8p and all tube channel.

We then put the Earthworks mic on a cymbal and hit it with sticks in various ways, single pings, crashes, etc. Again, we all heard the same exact results. The 8p had the biggest, widest and clearest sound, the tube channel was very close to that, the transistor channel has a more focused midrange sound, and the original Apollo – at this point - sounded like the highs and lows were less present, or even rolled off.

Next, we put up a single Sennheiser 421 on an Orange 4X12 and my Mesa Boogie MK IV head, and I played a few distorted guitar riffs through both a 6 string Telecaster with humbuckers and a 7 string Ibanez to hear more bottom end. Without sounding like a broken record, we all heard the same results once again with the 8p coming out on top, as far as having the widest frequency response and delivering the most clarity. However, the all transistor channel had a nice, well-defined midrange which worked great on distorted guitars. With the 7 string, which has more low end because there is a low B string below the bottom E, the transistor channel helped focus the low end and we agreed it may have been our favorite sound of the bunch. 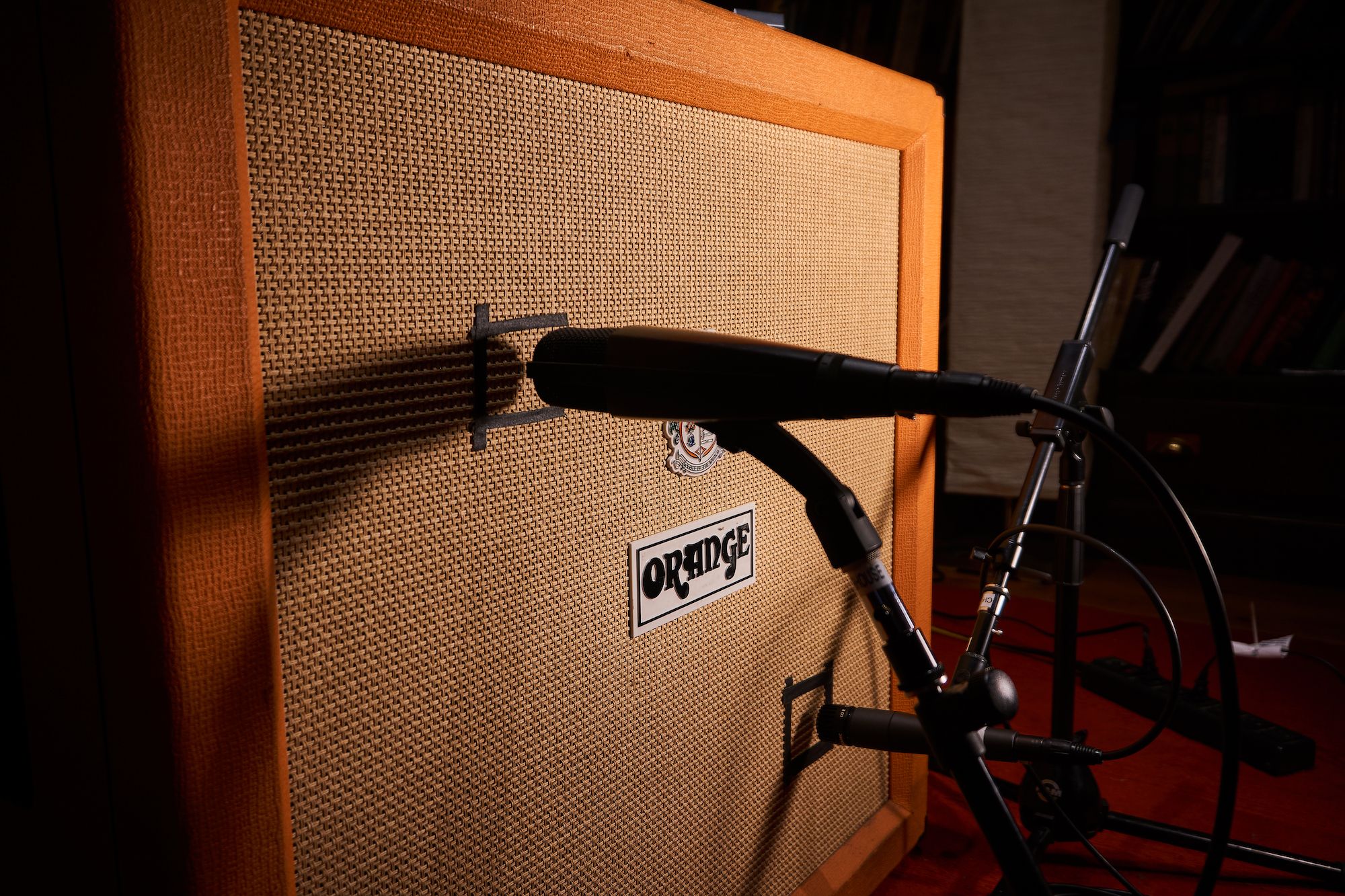 We all noted you could do an overdub with the same guitar and same amp setup, switch the preamp from tube to transistor, and get two different sounds – almost like using 2 different mics.

Overall, we unanimously all agreed the 8p clearly had more clarity and definition versus the original silver Apollo. The top and bottom seemed to be fuller, and it just felt better to us. The 4-710d tube channel was very close to the 8p, with a warm round response with just slightly less in the top end, but still very pleasing. The 710s transistor channel delivered what we thought it would, a more focused mid with less highs and lows. It truly shone on the distorted electric guitars. The original Apollo sounded more muted to us, almost like analog tape – which has its place in the world. But clearly, the 8p was the winner in our test.

Learn all about Universal Audio products in the AskAudio Academy video tutorials here.

All Photos in this article by Mike Dwyer.
Synthesis 101
The Filter
by Bob Moog Foundation