Aston's Stealth microphone has more to it than meets the eye. With both active and passive modes as well as multiple available voicings, Joe Albano found much to like...

Aston has established itself as a maker of microphones that deliver high-end performance at a more-than-reasonable price—the distinctive-looking Origin and Spirit (reviewed here a while back) large-diaphragm condensers and the laser-aimed Starlight instrument mic are well on their way to becoming modern classics. They’ve now added to that small but distinguished collection with the Stealth mic, a versatile dynamic mic for voice and instrument use, with a twist—actually several twists. Let’s take a look. 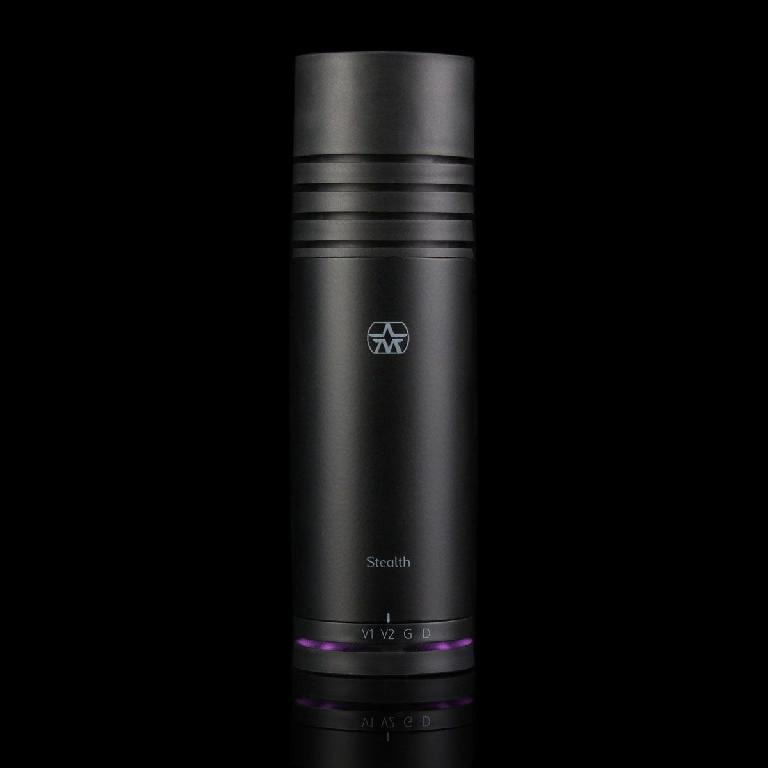 The Stealth is a multi-purpose “broadcast-quality” cardioid mic, with four distinct voicings—the first three are tuned for male voice, female voice, and guitar—any type, from acoustic to electric—and a fourth position offers a darker sound, intended to suggest the vintage warmth of a ribbon mic. Aston points out that these different tonal balances are achieved via the use of what they term “contour networks”, mostly avoiding the usual phase contribution of more typical EQ/filter voicing circuits, for a more transparent quality overall. The specific balance of the different voices was determined by extensive listening tests with a large contingent of artists, producers, and engineers, and each option should be suitable for multiple applications. I’ll come back to the voicings when I put the mic through its paces, below.

Despite its appearance in photos, Stealth is a large, fairly-heavy, front-address dynamic mic—the look and feel will immediately remind experienced recordists of the Shure SM7B, a classic broadcast mic, and that is one of its target applications, though the Stealth is far more versatile. It’s a solid-feeling mic, and the design offers a number of bonuses, some common to other Aston mics, others unique to this model.

Stealth incorporates a proprietary internal shockmount design that should eliminate the need for an external shockmount. Having had experience with their Spirit mic, I can vouch for the effectiveness of Aston’s designs in this regard. The capsule is enclosed in a stainless steel Faraday cage, an enclosure that blocks electromagnetic interference (like radio waves) and which should make the Stealth highly resistant to RFI interference.

The Stealth incorporates a unique mounting design—the mic clip snaps into a slot in the bottom of the mic, next to the XLR input, and allows for easy angling. For use in a particular setup—like as a broadcast mic—the Stealth can be quickly snapped out of the mounting clip and put away when not in use. This is a very functional design, but as I was snapping the mic in and out it occurred to me that if this non-standard clip were to break, you’d have a problem; it’s fairly robust, but it might be nice if Aston provided a spare, just as a nod to Murphy’s Law.

Now here’s where it gets interesting. Stealth is not just a mic—there’s an optional onboard preamp hidden within it as well! The mic can be operated in either passive mode or active mode. In passive mode, the mic’s sensitivity and output is typical of a (high-quality) dynamic mic. But Stealth can accept 48v Phantom Power, and when that is supplied and detected, the mic automatically switches to active mode, using the onboard Class A mic preamp, eliminating the need for external preamp gain. The preamp provides a 50 dB boost, offering the sensitivity and headroom of a condenser mic; when using the mic in active mode, Aston recommends maintaining the same distance you would with a typical studio condenser, promising a smoother, more detailed sound.

So, with its distinctive features and multiple voicings, how does the Stealth mic perform in use? I made a couple of test recordings with it, on acoustic guitar and my own speaking voice, comparing the four different voicings. Since the mic pre I was using at the time didn’t have a lot of gain, I turned on its 48v Phantom Power and ran the tests with the Stealth in active mode—the internal Class A preamp provided plenty of level, and with it active the mic should be fine even with preamps that are a little lacking in gain, like the ones you might find in some lower/medium-priced interfaces.

I set up the Stealth on acoustic guitar first, using a fairly standard positioning about a foot out, aimed between the twelfth fret and the neck joint. It was attached to the stand using the supplied snap-on clamp—even though the clamp looks a little flimsy and the mic is fairly large, there was no slippage, and as promised the internal shockmount design shielded it well from low end thumps.

I did four passes, playing the same simple chords each time, switching the voice setting for each pass with the large ring near the bottom of the mic. By the way, in one of their tutorials Aston warns that you won’t be able to easily turn this ring with your fingers, you’ll need to grab it with your hand, and boy, they’re not kidding. It was easy enough to turn it that way when holding the mic, but with it up on the stand it was a little more awkward; fortunately in real recording situations, you probably won’t have to fiddle with it too much, other than trying the different positions initially with a new vocalist or instrument to see which works best.

Here’s the acoustic guitar recording. I strummed for 8 bars in each position—V1, V2, G, and D; since V1 and D were closer in tonality than the middle two, I played an additional 8 bars each with V1 followed by D, for a better comparison. Remember, as I noted above V1 is nominally for male voice, V2 nominally for female voice, G is for guitar, from acoustic to electric, and D is meant to sound like a darker, warmer vintage ribbon mic.

You can clearly hear the differences. Going from V1 to V2 to V3 the tone gets progressively thinner, with more presence added. On this particular guitar I liked V1 best, but with a fuller-sounding instrument, I can see how the extra presence in the actual guitar setting G would enhance the sound nicely. I didn't have the chance to test Stealth out on an electric guitar cabinet, but the additional upper midrange bump I hear in the G position should serve particularly well in that application, helping the guitar sound cut through in a busier mix. And while this guitar sounded a little wooly in the ribbon-style D position, the basic tone I heard should do a fine job of warming up a much brighter acoustic guitar, like a Taylor.

Since one of the suggested applications for Stealth is as a broadcast mic, I decided to try it on my own voice, which is decidedly not your classic deep, rich announcer’s voice. I set up the mic the same as for guitar, and spoke into it from a distance of maybe a little more than 6 inches. I didn’t use an external pop filter, and for this simple test I didn’t need one.

Stealth on Voice (spoken word): The same phrase (more or less) with the mic in each position: V1, V2, G, and D

Once again, you can clearly hear the differences. The two vocal positions (V1 and V2) sounded smoothest, and I liked the slight extra heft V1 added to my (admittedly thin) voice—that was not surprising, since that’s the position intended for male vocals, but V2 also sounded good as well. The D setting was a little too dark for me, but I’ve recorded any number of (otherwise excellent) singers with thin, sometimes peaky voices that don’t sound great even with my usual go-to vocal mic (a U87)—I think the darker ribbon-like tone of position D could be a perfect antidote in those situations.

After I made and listened back to the recordings, I came across the published frequency response graphs for Stealth’s different positions (in the universal Aston Mic manual), and they reaffirmed what my ears told me. 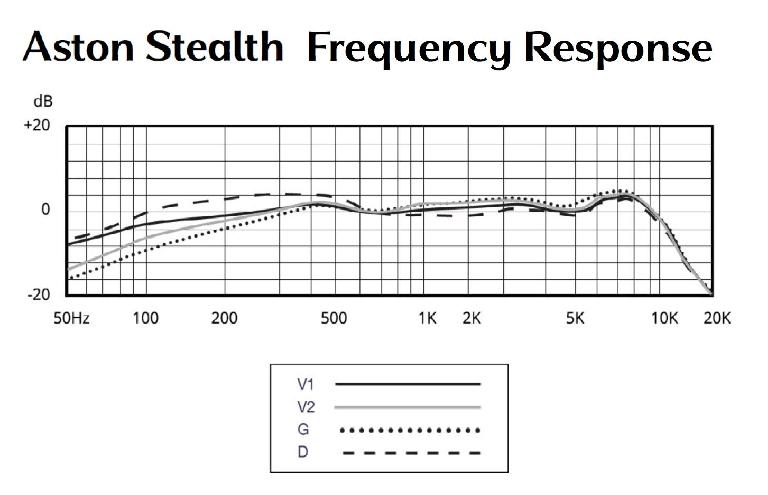 As you can see, the basic response is pretty consistent in all the positions (except maybe for position D)—in position V1 there’s a very slight dip at around 700Hz, relatively flat response from 900Hz up to 4k, another small dip at 5k, and a rise of abut 4dB between 6k and 10k; the low end falls off very gently below 400Hz.

Relative to V1, V2 falls off a little more rapidly below 200Hz, and there’s a little extra rise of a dB or so between 800Hz and 3k. The G position response shares that vey subtle lift, and adds another slight lift between 5k and 7k, while rolling off a bit more quickly from 400 Hz down. (You can hear all of this clearly in the recordings.) The D position is the outlier—the low end has a 4-5B boost from 600Hz down to around 100Hz, and another broad dip of a couple of dB from 700Hz to 4k. This accounts for the significantly warmer tone, which, again, should suit brighter instruments and peakier voices nicely.

The Stealth mic definitely delivers when it comes to its promised versatility, freedom from vibration, and healthy signal level (from the internal preamp), and I’d recommend it wholeheartedly for any of the recording applications it’s designed to take on. At around $400 it’s not the cheapest mic out there, but when you consider that you’re getting a versatile dynamic mic that can step in for a condenser or a ribbon, with an internal shockmount and a preamp to boot, it’s a lot of bang for the buck—definitely worth checking out.

Learn everything you need to know about audio recording: https://ask.audio/academy?nleloc=new-releases