Language
Arturia have now added the huge and awesome V Collection 4 to their 2015 winter holiday sale. Comprising software synths and drum machines, this means you can grab it for half price!

GRENOBLE, FRANCE: music software and hardware developer and manufacturer Arturia is proud to announce that its irresistible ‘Music Through The Ages’ promotional pricing campaign now includes V Collection 4 — its premium software collection of keyboards and drum machines, available to duly download for half price between December 15, 2015 until January 10, 2016...

ARP 2600 V brings back to life the long-since-discontinued ARP 2600, a Seventies-vintage, semi-modular duophonic synth used to great effect at the time by the likes of Herbie Hancock and Jean-Michel Jarre, as a fully-polyphonic soft synth suited to truly versatile sound creation. 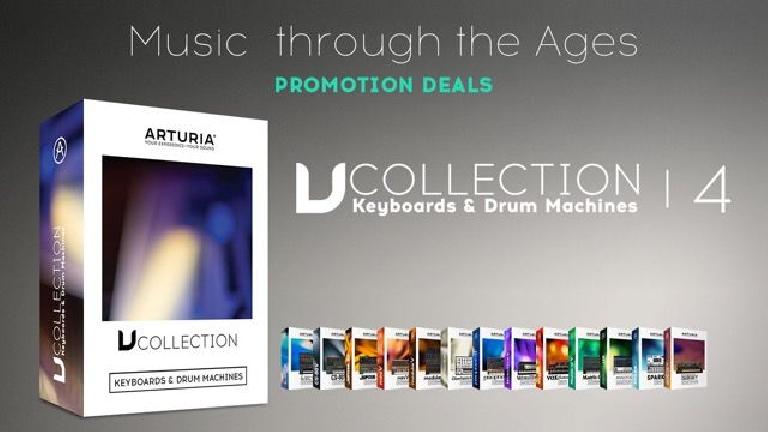 Roland’s former flagship, the lovely-looking Jupiter-8 programmable analogue polysynth, took the synth world by storm upon its (1981) release — boosting its already superlative sonic capabilities by adding an arpeggiator that helped make many mega hit singles shine forth, musically-speaking, such as Duran Duran’s ‘Save A Prayer’ and Howard Jones’ ‘New Song’ — as did Arturia’s award-winning Jupiter-8V software recreation.

Mini V brings to the desktop (or laptop) a polyphonic enhancement of an ever-present analogue monosynth that has been making its ‘phat’ presence felt for four-plus decades. Meanwhile, Modular V gives Dr. Bob Moog’s monstrous modular synth system from the Sixties a software makeover fit for 21st Century composition and recording workflow.

The original Oberheim Synthesizer Expander Module® (SEM) was originally conceived as a way of beefing up weaker-sounding compatible analogue monosynths of the time; the still-sought-after dual-oscillator-driven sound of the Seventies-vintage SEM lives on in Arturia’s award- winning Oberheim SEM V software recreation.

Prophet V faithfully brings back to life the historic and superlative sounds of the Prophet-5, the world’s first fully-programmable polysynth dating back to 1978, and also those of the 1986-vintage, California-created classic Prophet VS Digital Vector Synthesizer, Sequential’s first digital design, as well as being able to stack an astounding combination of both the Prophet-5 and Prophet VS as an all-new Prophet hybrid!

Wurlitzer-V reproduces the agreeable acoustic properties of the well-known Wurlitzer 200 EP electric piano’s distinctive reeds, key action, and amplification characteristics that became a staple sound of the Seventies, while also adding all manner of effects into the thoroughly modern mix.

Returning customers who have previously bought and registered an Arturia product are advised to check their MY ARTURIA account for a personally-priced V Collection 4 offer.