Language
The original Synclavier, a vintage 70s digital synthesizer, is now an Arturia plug-in instrument and it sounds authentic! It's part of the V Collection... and available separately for just $199!

GRENOBLE, FRANCE: music software and hardware developer Arturia is proud to announce availability of Synclavier V — partnering with original Synclavier® programmer Cameron Jones to create an authentic software simulation — as of May 19...

Synclavier V brings back the trailblazing late-Seventies-vintage Synclavier® synthesizer to the present day-desktop as an authentic-sounding software simulation. Its original creators made musical history with a unique approach to additive and FM (Frequency Modulation) synthesis alongside radical resynthesis developments. It could cleverly convert sampled sound into acoustically-identifiable additive synthesis subcomponents — Partial Timbres in ‘Synclavier-speak’. Chaining those Partial Timbres together as so-called Timbre Frames formed complex new sounds. Michael Jackson’s chart-topping single ‘Beat It’ from 1982‘s Thriller, the biggest-selling album of all time, opens with a thrilling-sounding Synclavier® synthesized gong that still serves as a fine example of this innovative instrument, for instance. It is included as one of 50 original Synclavier® presets in Synclavier V.

But bleeding-edge breakthroughs at that time, of course, came at a cost. Synclavier® systems stretched bank balances anywhere from $30K USD all the way up to $400K USD! Little wonder, then, that the Synclavier® was always a plaything of the rich and famous. Think recording and performing artist ‘A-listers’ like Sting and Stevie Wonder. Various visionary record producers such as Trevor Horn and Daniel Miller (on seminal Depeche Mode recordings). Foremost film composers like Howard Shore. To name but a chosen few. Fortunately for the rest of us that’s now no longer the case, thanks to Arturia’s pragmatic pricing of the still-cutting-edge Synclavier V.

Naturally, Native Instruments’ new NKS® (NATIVE KONTROL STANDARD) — allowing advanced integration with third- party software instruments — is in its DNA. DAW (Digital Audio Workstation) with automation support for considerable creative control on Mac OS X and Windows as a plug-in in all major formats is available, as is a standalone version. Created by Synclavier® software developer Cameron Jones, the DSP (Digital Signal Processing) engine of Synclavier V authentically reproduces the sound of the original 8-bit FM voice cards... right down to the noise floor! Fortunately, anyone seeking state-of-the-art as well as ‘old skool’ sound can control bit depth from between 4-bit to 24-bit resolution. Also Arturia has expanded some of this innovative instrument’s features and added some truly 21st Century-centric ones not available on the original Synclavier®. All are accessible via the resizable (Retina/4K-compatible) GUI (Graphical User Interface) that’s as easy on the eye as it is to use. 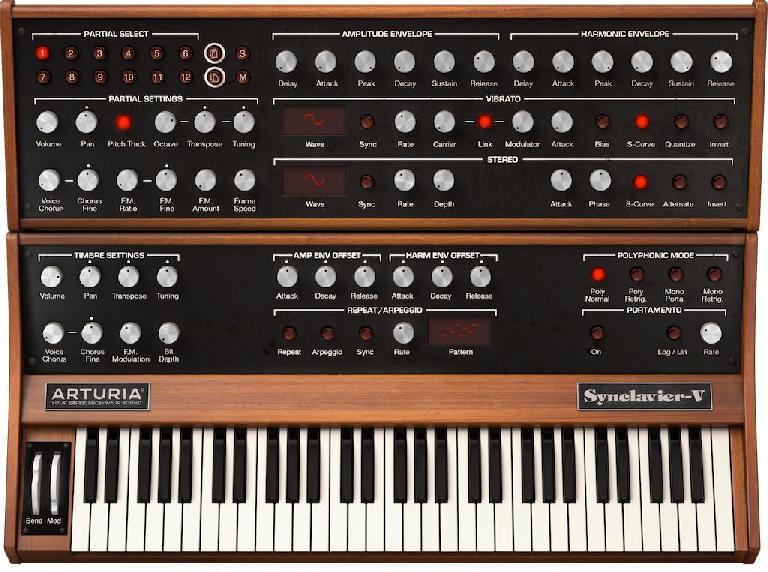 Amazingly Arturia has succeeded in implementing all this while maintaining 100% compatibility with the original Synclavier® sound library, thanks to collaborating closely with Cameron Jones. Simply said, Synclavier V takes everything the trailblazing Synclavier® could do as the most powerful additive and FM synthesizer ever created and makes it more powerful. Power up and power your music onwards and upwards with Synclavier V.

The AAX-, AU-, VST2-, and VST3-compatible Synclavier V is available to purchase as a boxed version from any authorised Arturia dealer or online as a download directly from Arturia for €199.00 EUR/$199.00 USD here: https://www.arturia.com/products/synclavier-v/buy

Synclavier V is included in Arturia’s simultaneously-available V Collection 5 bundle of 17 legendary keyboards (plus Analog Lab 2), available to purchase as a boxed version from any authorised Arturia dealer or online as a boxed version or download directly from Arturia for an introductory promotional price of €399.00 EUR/$399.00 USD — rising thereafter to €499.00 EUR/$499.00 USD — here: https://www.arturia.com/products/v-collection/buy (Existing Arturia customers additionally benefit from preferential pricing according to the number of qualifying products that they already own.)