Arturia has announced the latest addition to its Brute family - the DrumBrute Impact. With preorders available now via the website, DrumBrute Impact will retail for $349 / 299 €. It is available to preorder now, and will arrive in music stores worldwide during August 2018.

We've been sitting on the new DrumBrute Impact for a couple of days. Before we go into the press release, check out our video review / overview here and our written impressions soon after:

The DrumBrute Impact analog drum machine offers almost as much as the bigger DrumBrute for $150 less. After a couple of days of playing with DrumBrute Impact I've found the more compact form factor easier to work with in small spaces. The FM Drum is great and probably even more suited to the electronic music making community than the original machine. The pads are good quality and well suited for live performance beat makers.

The sequencer on DrumBrute Impact is similar, with the same features as the DrumBrute. That means up to 64 steps per pattern, four banks of 16 patterns (64 patterns in total). It's easy to use and you can easily implement polyrhythms -showing its power and flexibility.

The main standout features of DrumBrute Impact include the distortion effect for the entire output but there's also a saturation / distortion mode which can be toggled on for each of the 10 tracks, which Arturia calls Color. It's a quick way to alter the sound of a track, albeit a little limited.

Another feature that's great is the Random knob where it's possible to dial in randomness on patterns for individual tracks or the entire pattern. It's easy to access and allows for immediate and pleasing results. For more real-time fun the Roller and step repeat features also allow for static performances or patterns to come to life. 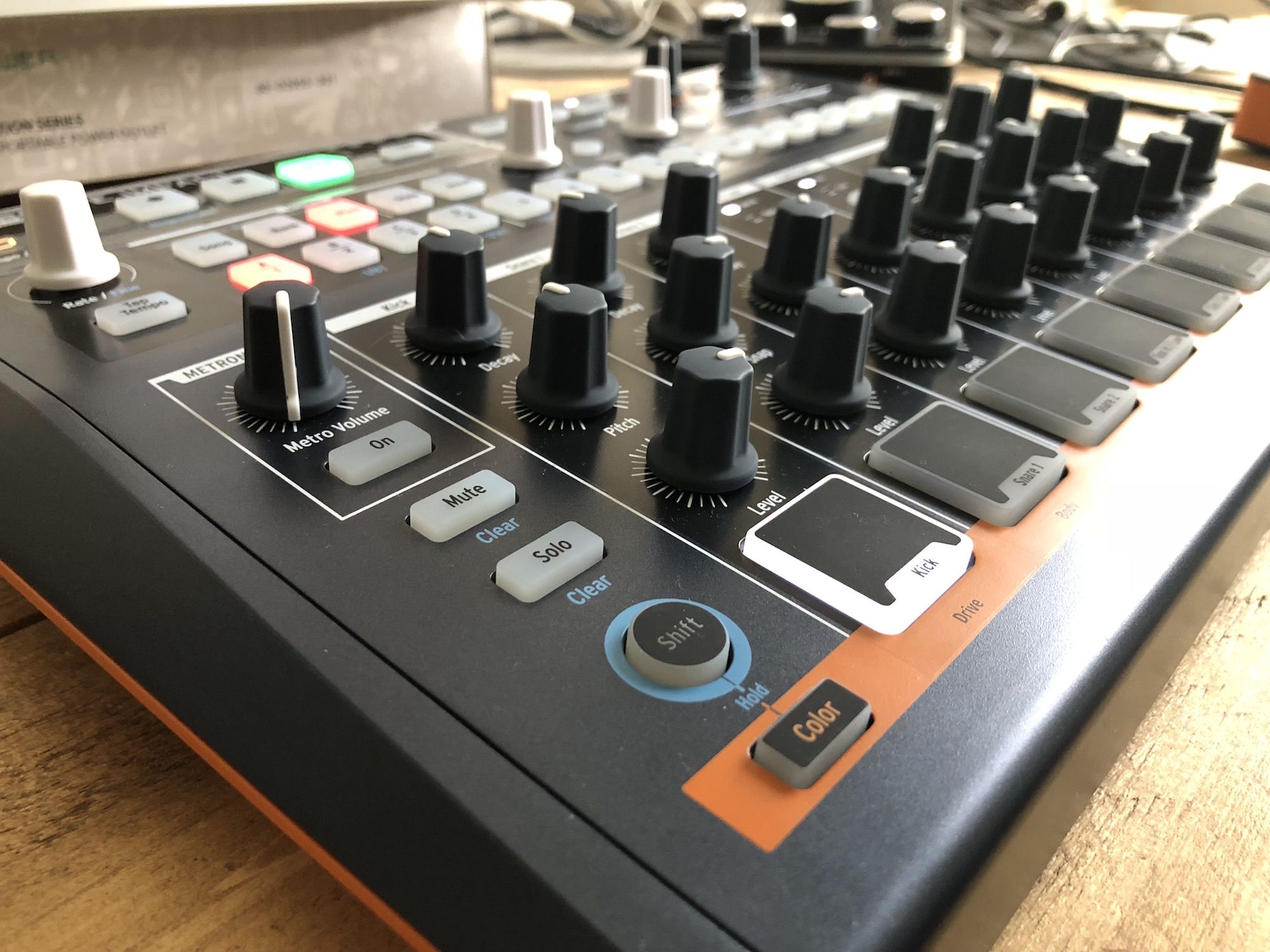 The controls on DrumBrute Impact are simpler per drum sound, but it's incredibly easy to dial up impressive sounds. In fact, so far I'm enjoying the sounds on the Impact more than its older sibling. The kicks can be punchy, the decay on the snares adds a lot of sparkle, and even the cowbell sounds enticing.

DrumBrute Impact connects via MIDI, USB and clock which is useful for many studio setups. However, unlike the DrumBrute which has individual outs for all of its 17 sounds the DrumBrute Impact doesn't do the same for each of its 10 analog sounds. Instead there are 4 outputs that cover groups: kicks, snare, hi hats, FM Drum. So you can route stems to different effects or a mixer and still have more control than only stereo outs.

For just $349 USD / $299€ the DrumBrute Impact is an excellent, almost portable, analog drum machine with a very capable and creative sequencer. The build quality appears to be on par with the original DrumBrute though without the wooden style trims. It certainly feels rugged and satisfyingly heavy. The Impact is one machine that feels like it'll fit in most studios and is easy to pop into a bag too.

We'll be back with a more in-depth review soon. Until then, check out our video review above and the official press release from Arturia below.

The newest member of the “Brute” analog hardware family, DrumBrute Impact really lives up to the name. Featuring attitude-packed, tweakable analog drums sounds, an all-new “Color” layer, output distortion, and arguably the best sequencer on the planet, DrumBrute Impact promises to redefine the way you create rhythm, drums, and percussion, both in the studio and on stage. 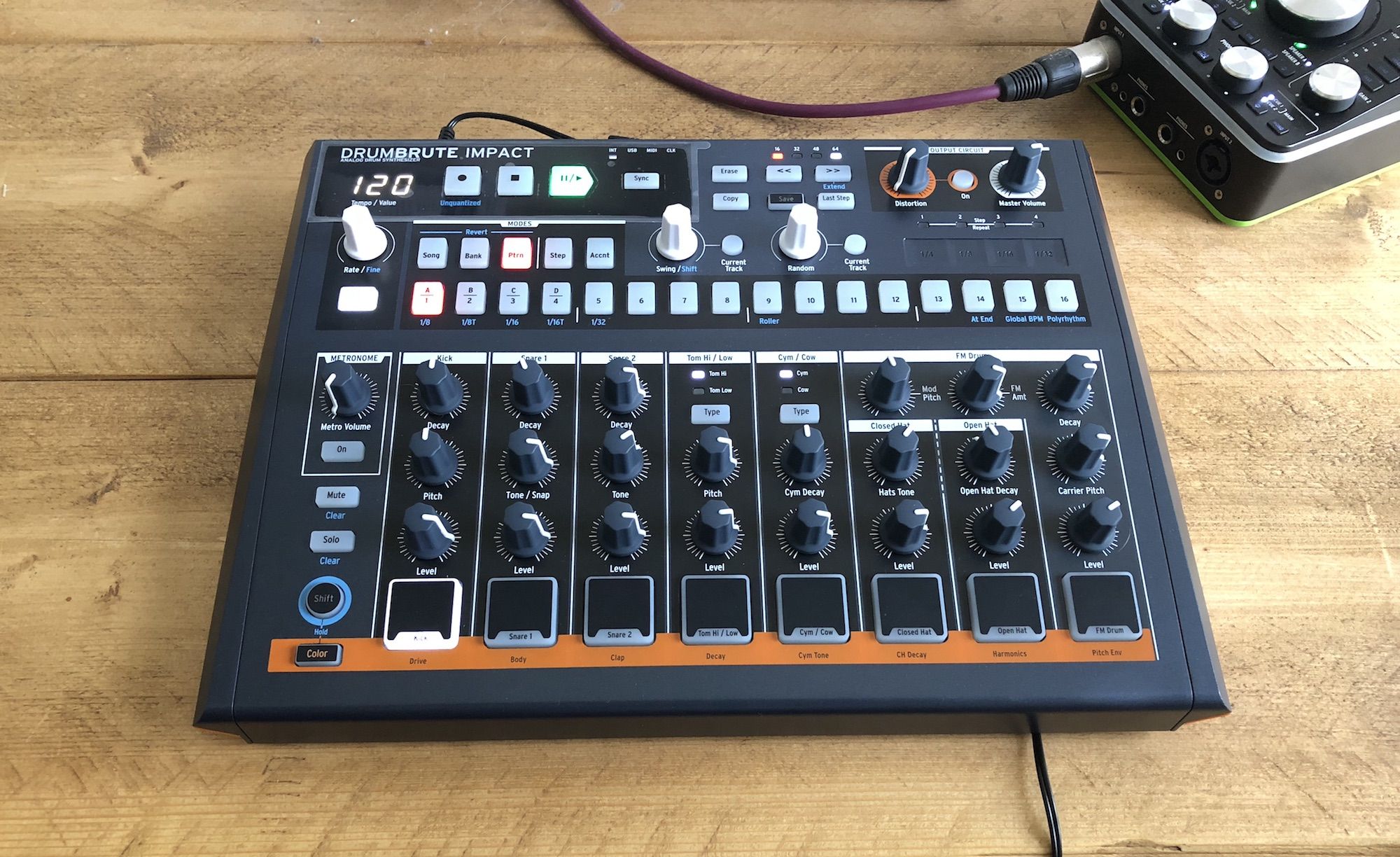 To add another dimension to its sound, versatility, and sequencing possibilities, DrumBrute Impact also features a “COLOR” layer, letting you create dramatic changes to the sound on the fly. This can be activated channel by channel, or programmed using the sequencer, and generates unique tonal changes in the drum sounds. Add drive to the Kick, change the tone of the Cymbal, max out the pitch envelope of the FM Drum, “Color” gives DrumBrute Impact another level of creative possibilities.

True to its nature, DrumBrute Impact also features a drum-optimized distortion on the output bus, with a simple “gain” knob and an on-off switch. DrumBrute Impact features a polyrhythmic 64-step, song-capable sequencer supported by a host of easy-to-use performance controls. Add Swing, inject some Randomness, glitch it up with a Step Repeater, quickly spice up patterns with the Roller, add Accents, and even record Unquantized should you wish.

DrumBrute Impact also gives you comprehensive connectivity, with 4 extra output busses for post- processing or multi-tracking, Clock in and out to sync with vintage or modular gear, MIDI in and out to sync up with contemporary synths and outboard, and USB for perfect integration with your DAW and the Arturia MCC, which also gives you access to extra customizations behind the scenes.

DrumBrute Impact will retail for $349 / 299 €. It is available to preorder now, and will arrive in music stores worldwide during August 2018.