Language
Looking for a MIDI controller or controller/sequencer? Arturia welcome you to the dark side with Black limited edition Beatstep & MiniLab controllers. Same prices as white versions but with software.

GRENOBLE, FRANCE: music software and hardware developer Arturia revolutionised the concept of what a priced-to-go compact controller can be with both its award-winning BeatStep Controller & Sequencer and MiniLab Universal MIDI Controller truly turning heads at past NAMM shows; today, within weeks of stealing the show at The NAMM Show 2016, January 21-24 in Anaheim, California, USA with more major product launches, it is proud to announce availability of limited-edition black versions of both the BeatStep and MiniLab that represent better value than before by bundling them with award-winning Arturia and third-party software...

Like its original white namesake sibling launched at The NAMM Show 2014, the BeatStep Black Edition is a chameleon-like controller and sequencer that matches many musical environments effortlessly. Compact and rugged, it is the perfect companion on the road or in the studio, offering a degree of functionality and performance hitherto unheard of in a portable pad controller — certainly at its tempting ‘takeaway’ €99.00 EUR/$129.00 USD asking price!

Speaking of which, the BeatStep Black Edition is bundled with Oberheim SEM V — Arturia’s award-winning authentic software recreation of the original Oberheim Synthesizer Expander Module® (SEM), which was itself conceived back in the Seventies as a way of beefing up weaker-sounding compatible analogue monosynths of the time, thanks to its rich two-oscillator driven sound, soon after forming the muscular musical backbone of several subsequent trailblazing Oberheim polysynths — alongside Arturia’s Analog Lab, an abundantly- powerful software synthesizer solution with 6,000-plus presets by internationally-renowned sound designers derived from Arturia’s award- winning Analog Classics, a range of authentic-sounding software recreations of classic analogue instruments. Included third-party software comes courtesy of Ableton Live 9 Lite, a customised version of the Ableton Live music-making software, featuring selected instruments and effects plus all the essential workflows to write music, record audio, and songs intuitively in an innovative way — thanks to BeatStep Black Edition, triggering clips in Live 9 Lite are as easy as exercising your trigger finger! — and Grand Piano Model D from fellow French developer UVI, a sample-based virtual instrument delivering the sought-after sound of the superlative Steinway Model D concert grand piano with all the warmth, expressiveness, and detail of the real thing. 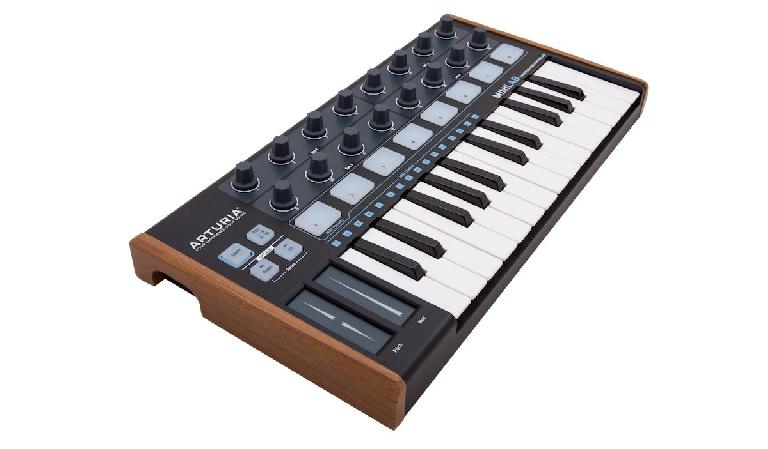 To sweeten the deal further still, BeatStep Controller & Sequencer and its younger brother, BeatStep Black Edition, both benefit from a firmware update (to Version 1.2) with neat new features such as resetting factory presets — either everything or everything except pad calibration — particularly proving to be well worth the wait.

When launched in dazzling white at The NAMM Show 2013, the diminutive yet feature-rich MiniLab Universal MIDI Controller proved an irresistible draw as one of the most feature-packed, compact control systems on the market, marrying sought-after hands-on control with portability par excellence. Engineered for the musician on the go or the performer with limited space, it offers a comprehensive set of features in a portable package that is as sturdy as it is easy on the eye. Discover new melodies with 25-mini keys plus pitch and modulation touch-strip controls. Drum out incredible rhythms with two banks of velocity-sensitive backlit performance pads, and tweak software to your musical heart’s content with 16 full-size rotary encoders. When combined with the included Analog Lab it becomes a real hybrid synthesizer.

Still one of the most feature-packed, compact control systems on the market today, it too benefits from the triumphant back in black treatment to remerge refreshed and reinvigorated as the MiniLab Black Edition — even better value than before, thanks to also being bundled with additional software from Arturia (Oberheim SEM V), UVI (Grand Piano Model D), and Ableton (Live Lite).

Black or white, then, the choice is out there... but beyond the plain to see colour change there is so much more to the BeatStep Black Edition and the MiniLab Black Edition than meets the eye. Even though they still respectively represent a compact control powerhouse and the world’s premier mobile keyboard solution, they are all the better for being bundled with that additional software. Now they represent really remarkable bang for the buck. Best be quick, though... they are limited-edition bundles, after all!

BeatStep Black Edition is available to purchase for €99.00 EUR/$129.00 USD from any authorised Arturia dealer or directly from Arturia here: http://www.arturia.com/buy/hybrid-synths/beatstep-black

MiniLab Black Edition is available to purchase for €99.00 EUR/$129.00 USD from any authorised Arturia dealer or directly from Arturia here: http://www.arturia.com/buy/hybrid-synths/minilab-black