Logic Pro X 10.5 is here and it's a free upgrade for existing users. Will the new features like Live Loops, Sampler, Step Sequencer, etc. blow you away? We think so!

At $199, Logic Pro X has always been an amazing deal. Now, with the additional new features, its price seems more like a steal. Especially since anyone can currently download a 90 day trial version for free from the Apple https://www.apple.com/logic-pro/ website.

To see all the new features action, macProVideo is offering a FREE 11-part What’s New in Logic Pro X 10.5 course by Josh Carney. Find it here. 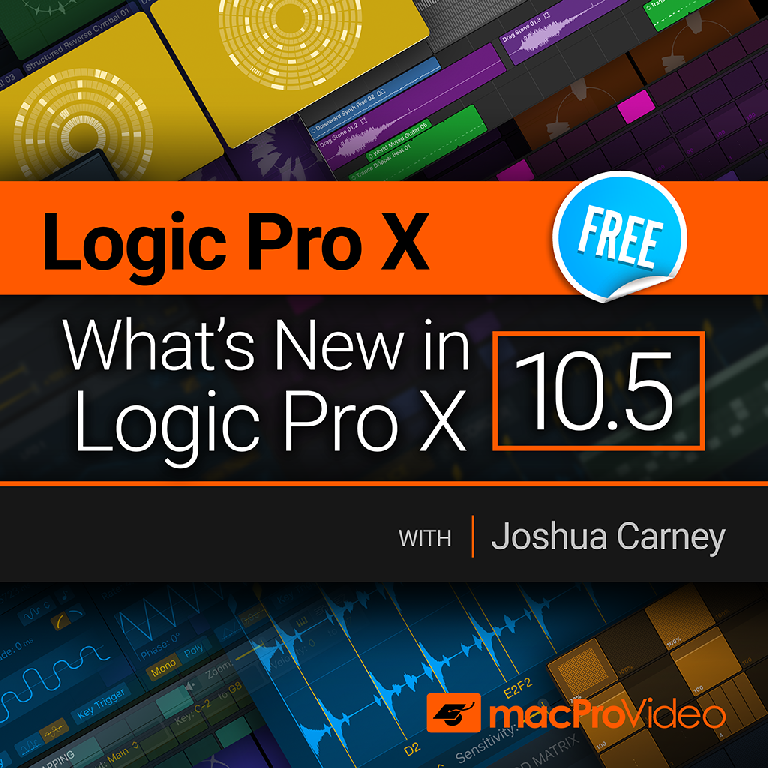 (Subscribers to Ask.Audio Academy will have access to all new Logic Pro X 10.5 video courses premiering on macProVideo.com within a few hours.)

Steve H here, and as most of you know I’ve been a Logic fan since the early EMAGIC days. I’ve had some time to dig into Logic Pro X 10.5, I can tell you that Logic Pro X 10.5 is the biggest release since X in 2013. To see it in action after reading this overview, check out this FREE macProVideo course. 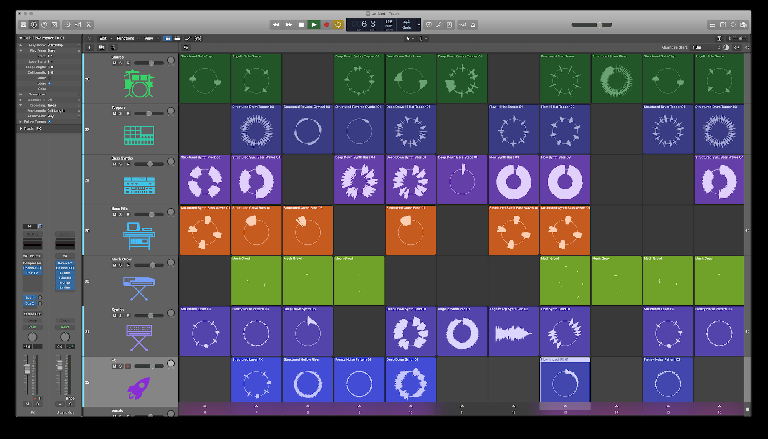 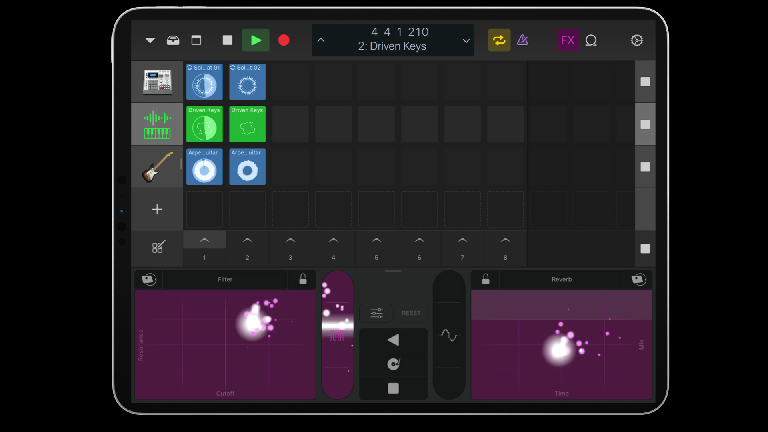 For Electronic and Hip Hop producers inspiration often comes from experimenting with loops and beats. Logic Pro X 10.5 now has a dedicated grid playground called Live Loops where loops and scenes can be launched, mixed and matched, mashed and combined, triggered, recorded and arranged in every way imaginable. It’s a scene-based musical canvas that works in perfect harmony with Logic Pro’s classic, linear tracks. That’s right, as you perform on the Live Loops Grid, your performance can be recorded linearly on the same tracks in the workspace. Then you can overdub vocals and other “tracked” parts in a more traditional, linear way deploying Logic’s array of synths and plugins.

It’s called Live Loops for a reason: So I put it through its paces by recording into some Live Loops cells with my favorite synths. I then dragged in some very spacey, new Pattern Loops into the Grid from the Loop Browser. Next, I inserted the new Remix FX on the master channel, with its seventeen (that’s right,17) performable realtime, automation-ready FX. I opened the free Logic Remote app with its multi-touch gestures and started launching cells & scenes and jamming. The results? Well, I’m convinced Logic is now a capable live performance DAW. It could be that Logic users looking enviously at Ableton Live’s clip-based tools will find many of these features now inside Logic Pro X 10.5. I’ve been informed that Live Loops grid works seamlessly with most Novation Launchpads right out of the box too!

Quick Tip: The best way to get started with Live Loops is load one of the Starter Grids templates and start launching scenes!

And If you want to really learn all that you can do with Live Loops, watch this video course by Josh Carney: 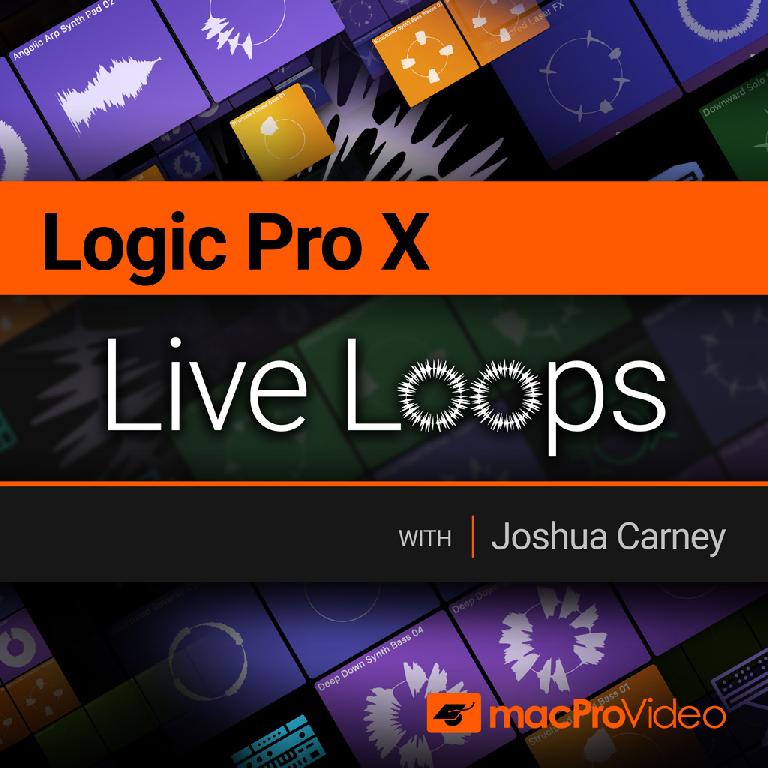 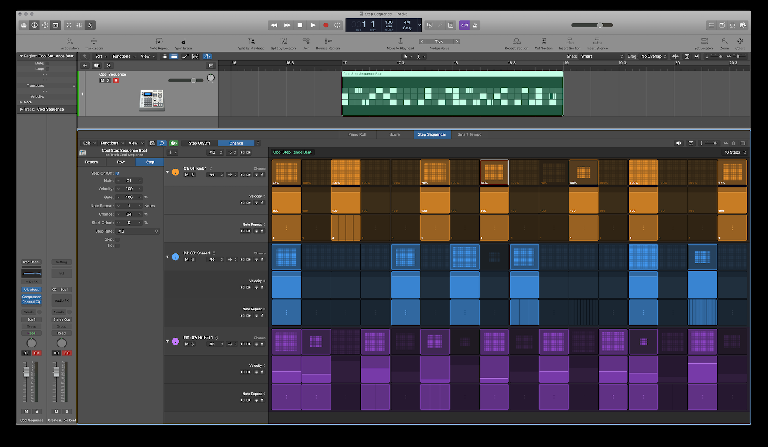 Logic 10.5’s new Step Sequencer is another powerful playground. Logic has had many editor predecessors to the Step Sequencer. Some of us graybeards remember the Hyper Editor. That was reworked into the Step Editor. Now both of those ancient ancestors are in DAW heaven and the new generation Step Sequencer is the standard bearer. (Cue the singing angels)!

Imagine a sequencer with an infinite number of independent rows. Envision those rows playing back at different speeds and being different lengths in a polyrhythmic fashion. Some rows cycle forward. Other rows step backwards or access their programmed steps randomly. What about programming step probability? With a row setting labelled “Chance” you can only kind of predict what steps might actually play!

That’s the power of Logic’s new Step Sequencer, and it comes with a massive library of patterns for bass, drum and melodic sequences. Every sequence pattern you create can also be saved as a new Pattern Loop in the Loop Browser for future deployment in the Tracks Area or in the new Live Loops Grid. This is a sequencer that is designed to unleash massive amounts of creativity and it succeeds!

10.5 ships with 2 new samplers: Quick Sampler, Sampler and a new sample utility called Auto Sampler. Here’s what they can do: 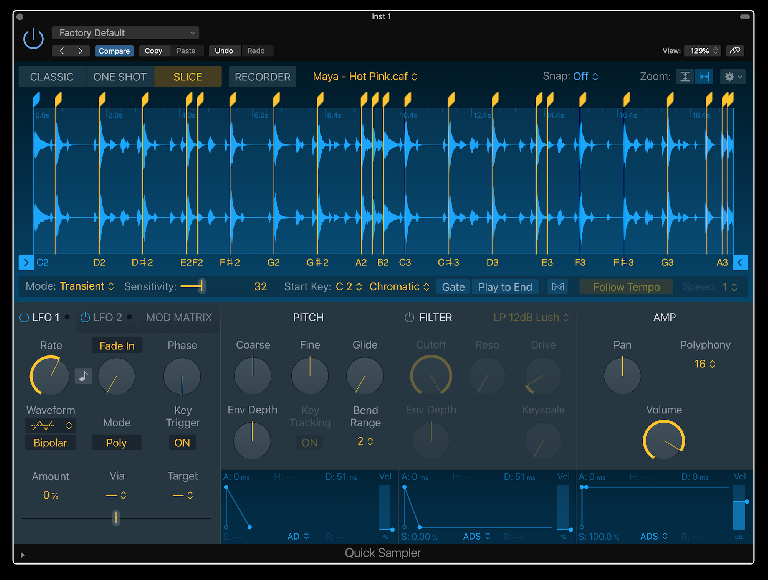 Quick Sampler is lightning fast. It’s for situations where there’s a snare hit embedded in a loop, and you only want to trigger just that snare sample to augment your track. Drag and drop it and let Quick Sampler make it happen. Quick Sampler “quickly” slices and maps any audio or MIDI region on a track into individual samples across a keyboard or drum pad. Yes, it’ll actually auto-bounce MIDI regions into a sliced and mapped audio sample if that region is on an instrument track! This whole process is now a simple Drag and Drop workflow. Here’s how it works:

Grab ANY audio or MIDI region/file from the Tracks Area, the Loop Browser or even an audio file from your desktop or any drive. Drag into the track header where there isn’t a track. A new pop-up menu shows you several options. Select Quick Sampler and BOOM! Every individual hit in that loop is auto-sliced by transient and auto-mapped to MIDI notes and playable on your MIDI controller. It’s that fast! Of course there are many other things you can do to control and shape parameters or remap the sounds once they’re in Quick Sampler. This is a workflow enhancement that’s going to get a ton of use! 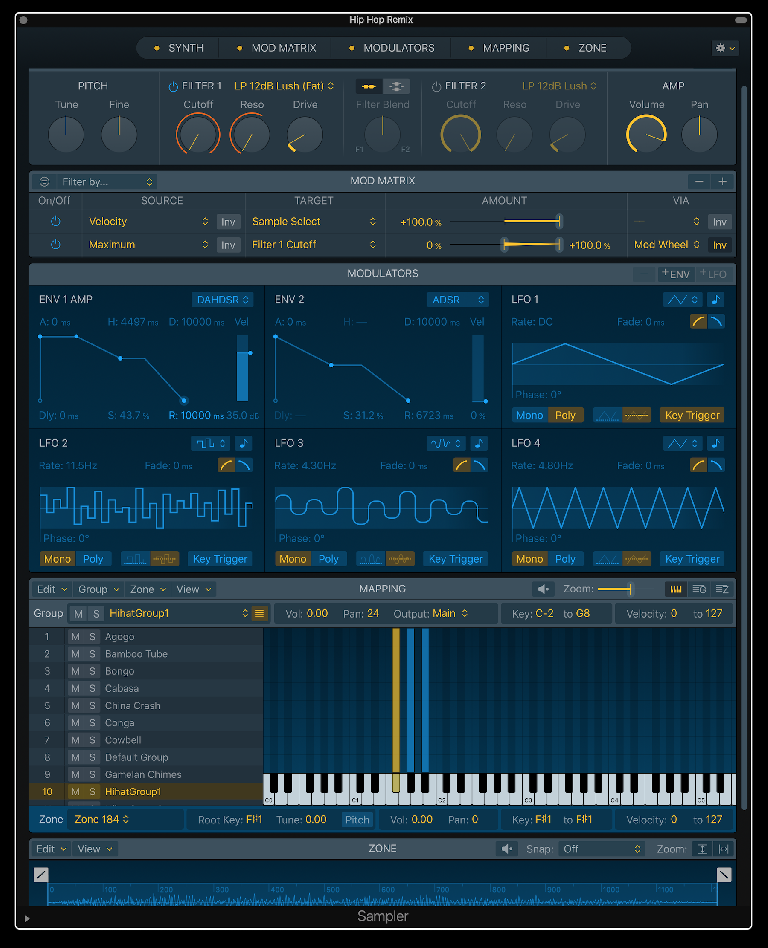 Sampler is the long-awaited replacement for the esteemed EXS24 which was one of Logic’s first plugins. GOOD NEWS! All of your sample libraries are safe as Sampler is completely backwards compatible with any EXS24 instrument or file. BETTER NEWS: Sampler is a better sampler with tons more features, filters and modulators. It’s easier to program and it has an intuitive UI. BEST NEWS: Sampler is really intelligent. It supports Logic’s new Drag and Drop workflows. For instance, you can actually drop a serious large collection of, say, chromatic string samples with several levels of multisampling and Sampler will analyze pitch, auto loop, (if you want) and auto-map it chromatically across the keyboard. The technology behind both Sampler and Quick Sampler is quite impressive. 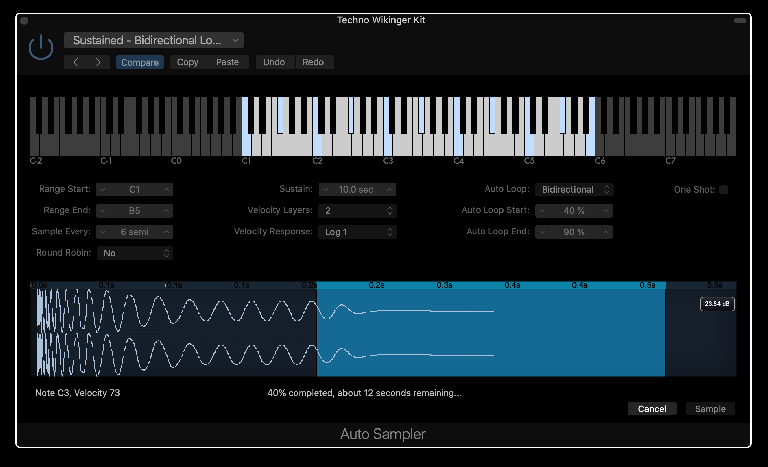 Got a modular or keyboard synth you want to sample for use in your Logic projects? How about a 3rd-party soft synth or a complex Track Stack that would be great to have as a sample instrument? This is a job for Auto Sampler. MainStage users since 2015 may be familiar with this plug-in.

It’s so intuitive. Simply insert the Auto Sampler plugin (located in the FX plugin Utility folder) onto an audio track, instrument track, external instrument track, aux channel or output channel. The goal is to insert it anywhere in the signal path and Auto Sampler will always find the audio source and then add-in any effects processing inserted in the signal path. Then select a few simple settings that include Velocity Levels, Sustain and Auto Loop algorithms, hit “sample”, go grab a beverage and come back to a finished, freshly sampled Sampler instrument that’s located in the Sampler’s Auto Sampler folder. It’s that easy. Now you can sample any synth, with multiple layers in a snap. I imagine that this is going to be a very popular utility for every Logic user.

Drum Machine Designer has been reimagined and is no longer tethered exclusively to Ultrabeat. In fact, it has Quick Sampler built right in with all of the same Drag and Drop workflows. Now every pad can trigger a completely different soft synth or sampler. That’s because every pad has its own channel strip in a Track Stack which makes it a snap to build a custom drum machine with each sound having its own FX using any and all of your favorite Logic or other 3rd-party software or hardware instruments. That’s huge. 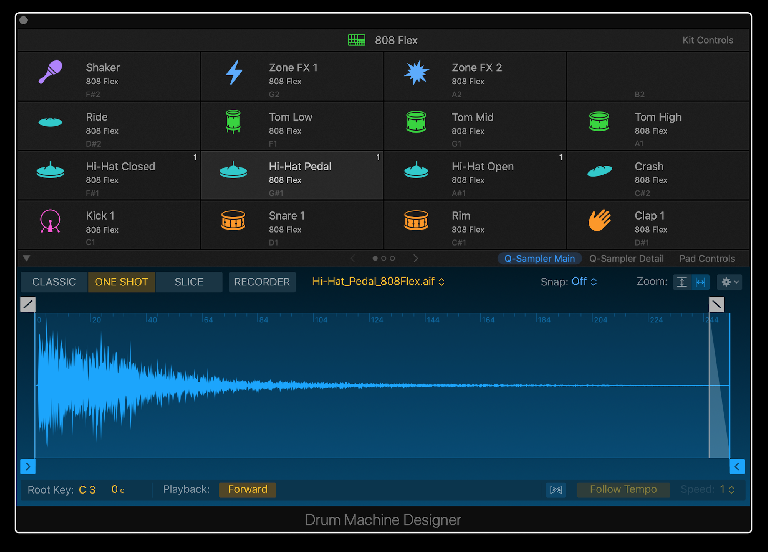 Remapping the pads input notes (the MIDI key you hit to trigger a pad) and the output notes (the actual MIDI notes that trigger that pad’s instrument) is now selectable, providing ultimate flexibility as you set up your dream drum machine. As I mentioned before, Drum Machine Designer takes full advantage of Logic’s new Drag and Drop workflows. You can drag any kind of audio or MIDI region from your tracks or Loop Browser onto an empty track header slot to create a new transient-sliced Drum Machine Designer instrument. And, each pad is its own independent track in a Track Stack ready for further processing and mixing. 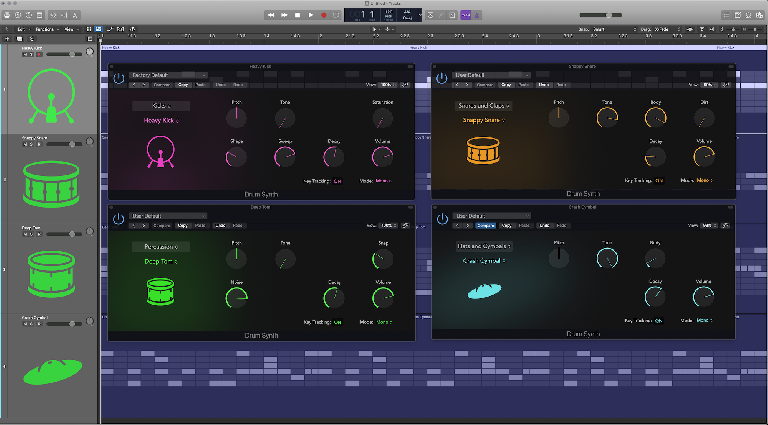 Logic 10.5 comes with another new instrument called Drum Synth. As the name implies, it's a synth dedicated to electronic drum and percussion sounds. It comes in four flavors: Kick, Snare & Claps, Percussion and Hats & cymbals. Whether you like to replicate classic electronic drum sounds or design your own custom kits by tweaking parameters, now you can, with Drum Synth. 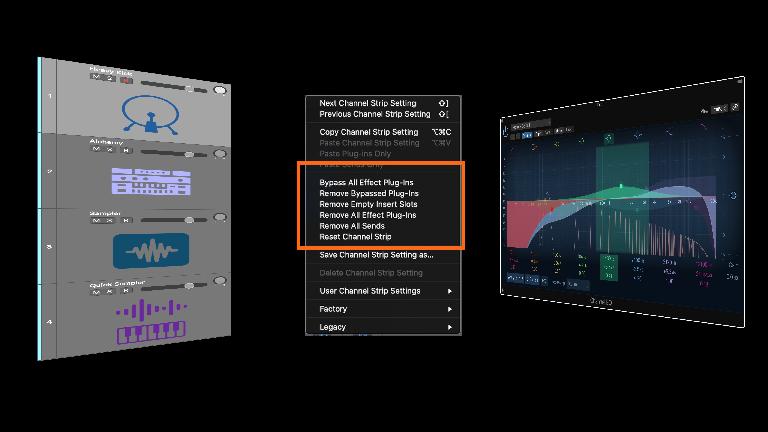 As if there isn’t already enough new stuff. Logic 10.5 has new HQ EQs with refined sound and graphics. There are long-awaited channel strip shortcuts that make bypassing & removing all plugins a one-click process. There’s also the addition of stylish, flat-style track icons.

Logic Pro X 10.5 focuses on current production and composing workflows. Workflows that many of us had to go to other DAWs to use and explore. As a long time Logic user, having access to grid-based arranging with Live Loops, advanced step sequencing and the ultra-intuitive Quick Sampler inspires me to experiment with making beat-driven music right in Logic, using the MIDI editing, FX, mixing and mastering tools that I know and love.

As a new DAW user, or one that is considering switching, Logic Pro X 10.5 now has everything a musician needs to produce hit songs, create killer beats, score to film and video and much, much more. I suggest trying it FREE for 90 days. I also suggest watching the multitude of Logic courses at macProVideo.com, Where Mac Users Learn™.

For a deeper dive into what’s new, check out this FREE macProVideo course by Josh Carney”

And If you want to really understand the power of Live Loops, check out this additional macProVideo course:

Learn all the new features in Logic Pro X 10.5 in this FREE video course at macProVideo.com (it will be available for subscribers to the Ask.Audio Academy within a few hours): logic-pro-x-100---what-s-new-in-logic-pro-x-10-5

Learn how to make the most out of Live Loops in Logic Pro X 10.5: https://macprovideo.com/course/live-loops