Antelope's Edge family of mics offers huge flexibility, with mic modelling, variable pattern control and much more. Joe Albano put them to the test and here's what he found.

Antelope is well known for their high-end interfaces, which include a suite of hardware-based emulations of vintage/classic analog gear. A while back they brought this technology to the microphone arena, with a couple of modeling mics that work in conjunction with their interfaces to emulate the sound and performance of a number of classic mics. The latest additions to the family are a collection of three modeling mics—the Edge family—that build on the original Edge mic and takes things to the next level. The collection includes a simple cardioid-only model, a multi-pattern model, and a stereo/quad model—the latter two offer the ability to not only model the frequency response and distortion characteristics of classic mics, but also their directional responses as well. I had the chance to check out the Edge collection, so here’s the scoop. 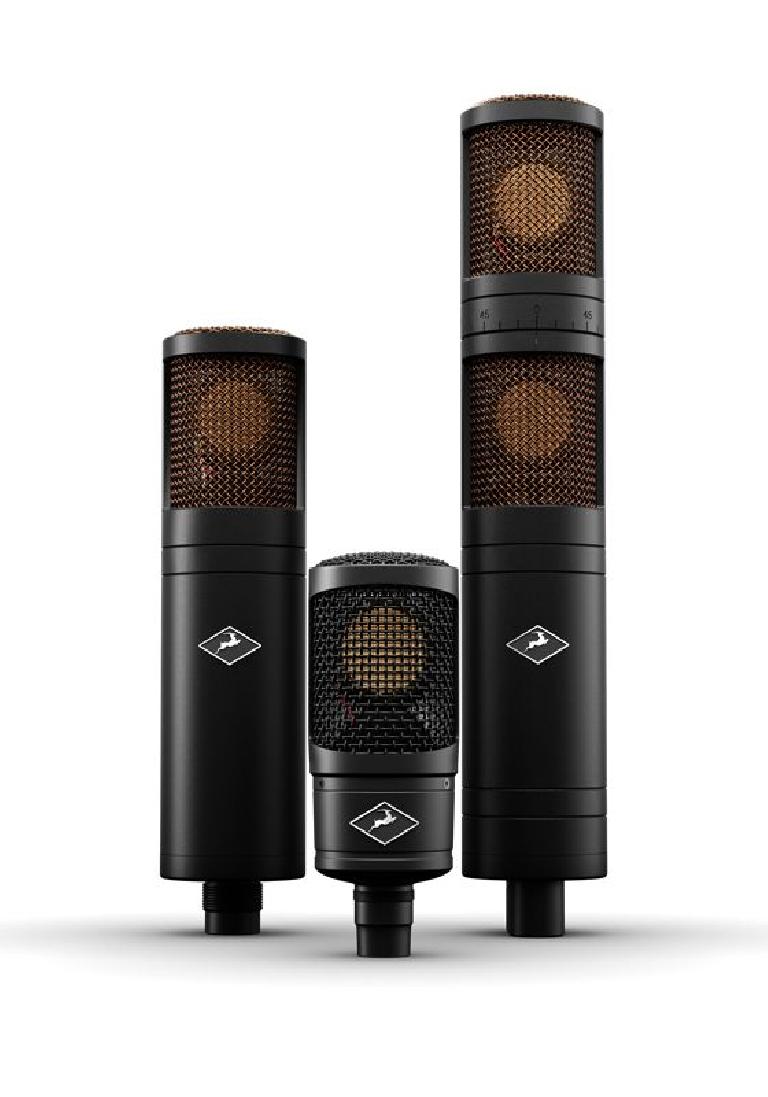 All three mics in the Edge family are high-end large-diaphragm condensers. The Edge Solo is the baby of the bunch—it’s a single-capsule/single-membrane fixed-pattern cardioid design, capable of emulating a  number of classic cardioid-pattern mics. The Edge Duo—the middle child—is a single-capsule/dual-membrane LDC; thanks to separate outputs for the membranes this one can emulate both on and off-axis response of the classic mics it models. The top of the line Edge Quadro is a dual-capsule design—dual membranes for each of the capsules provide four outputs for stereo recordings with full on/off-axis emulation, or 4-channel recordings.

All the mics are capable of emulating a wide range of classic mics—while the originals are not specified by name, the model names, images, and descriptions make it pretty clear what vintage mics are on tap. The full list includes all the mics shown below, and by the time this article comes out an additional group of mics should have been added to that already-healthy tally.

Though the Solo is the most basic mic in the collection, it doesn’t skimp on specs—even without the modeling aspect, with its 20-20k response and -116dB THD+N, this would be an excellent mid-priced mic for serious studio use. 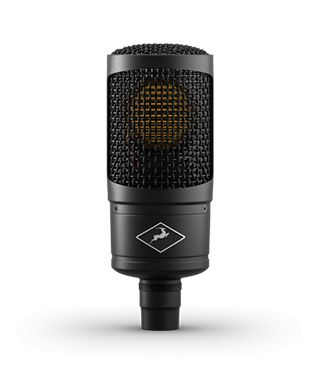 Solo can be phantom powered and utilizes a standard XLR cable. Since it’s cardioid-only, it doesn’t share its bigger brothers’ abilities regarding pattern control and emulation (see below), but it does model a nice collection of cardioid mics. These should prove to be more than enough for most small-to-medium-sized recording enterprises, effectively serving as a mic closet that would be enviable in much larger studios—I’ll go over the use of the relevant modeling software (shared by all the mics) toward the end of the review.

The Duo shares the Solo’s high-quality specs, but is a multi-pattern mic, and there’s where things start to get interesting. 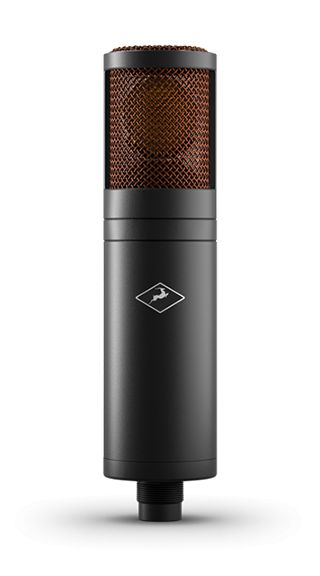 Most dual-membrane mics achieve multiple patterns but offer only a single output. The Edge Duo offers separate outputs for each of the two membranes, which allows for another level of control for both standard recording use and for its classic mic emulations. Included in the box is a breakout cable, that takes the 5-pin XLR connection on the mic out to two standard 3-pin XLRs for connection to the preamp(s). 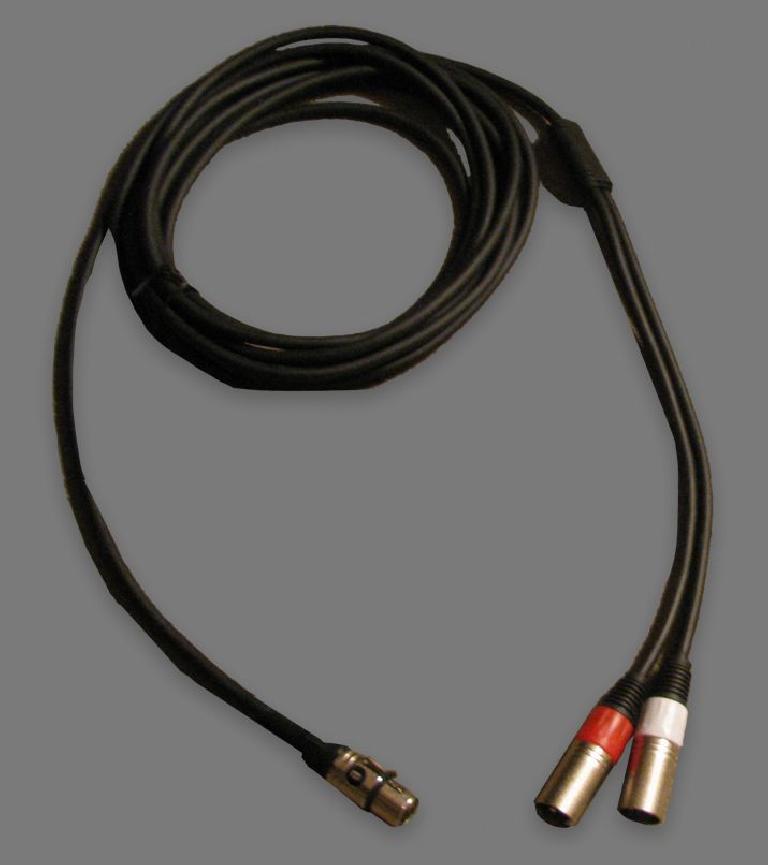 The breakout cable for the dual-output Duo & Quadro

This arrangement allows the recordist to change the pattern after-the-fact—after the recording is done. By recording the outputs of both of the capsule’s membranes on two channels, Edge Duo captures all the information needed for the user to switch patterns in playback, allowing for experimentation as well as corrective adjustments. And when the software is used to model a particular multi-pattern mic, it’s possible to switch patterns in playback to emulate the different patterns available on that mic as well.

The Quadro is like a pair of Duos packaged as a stereo mic, with a pair of the Duo’s dual-membrane capsules, and two breakout cables. To take full advantage of it you’ll need to record on four channels.

Naturally you can use the Quadro as a stereo version of the Duo, with full control of pattern in playback for both channels.  A nice feature is the ability to rotate the top capsule 360°, making it a breeze to set up for different mic techniques like XY, MS, and Blumlein, as well as 3D sound.

All the mics come in robust flight cases; the Quadro additionally includes an elegant wooden case-with-a-case. Cables and shockmounts are included with Quadro and Duo; Duo—given its traditional vocal condenser profile—also includes a pop filter, and Solo provides just a regular (though good-quality) mic clip. 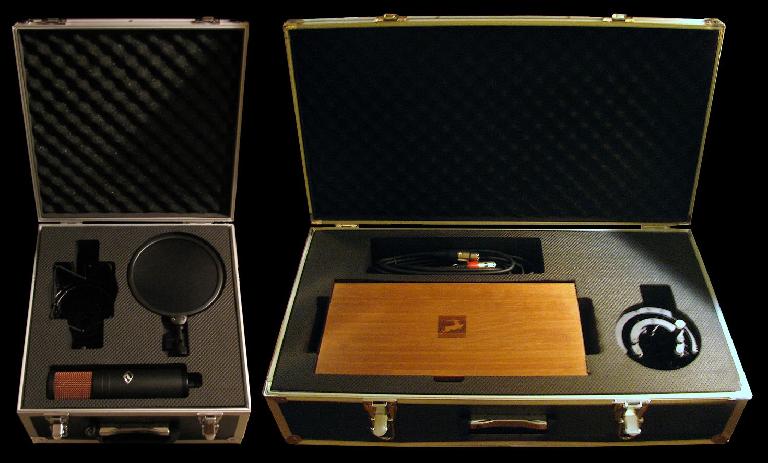 Of course, while these mics are all excellent designs in their own right, their raison d'être is the emulation of classic mics via software. Antelope’s earlier models—the original Edge and Verge mics—originally required the company’s own hardware to power the modeling engine; the Edge family can also be run this way as well. However there are a couple of other options. For those who don’t want to run the mic with one of Antelope’s (high-end) interfaces, they offer a dedicated two-channel preamp—the Discrete MP—that can provide the modeling power, along with a known audio characteristic for the most accurate mic modeling, free of any unknown preamp artifacts.

But for the rest of us, who may already have a suitable interface and preamps, the Edge mics now offer the option of Native processing for the mic modeling. Available in VST, AU, and AAX formats, the plug-in lets you record the dry signal straight from one of the Edge mics and then dial up different emulations—including pattern adjustments with the Duo and Quadro—in playback, in any suitable DAW. That’s what I used to check out the modeling aspect of the Edge mics.

Once you’ve registered your Edge mic, you can create an account at the Antelope website and download/install the Native Emulation software—you’ll need an iLok to authorize it. When I had this in place, I made some recordings with the Edge mics. Listening to the basic microphone sound, it was clear that even without the modeling these mics offer high-quality sound and performance. I tested the software with an acoustic guitar recording made with the Duo.

Since the Duo offers separate access to the front and rear membranes, I connected it to two channels on a mic pre via the supplied breakout cable. Again, the Edge mics are ideally designed to be run with one of Antelope’s interface-based preamps or the Discrete MP, which provide a known response for the modeling, but as long as you don’t push the level too hard through a “character” preamp, any potential contribution from a suitably clean pre should not be detrimental to the accuracy of the emulations.

The Native Emulation plug-in presents a choice of modeled microphones—you can get the full list on the Antelope website here (I’m told that by the time this review is published that list should augmented with a significant number of additional models). 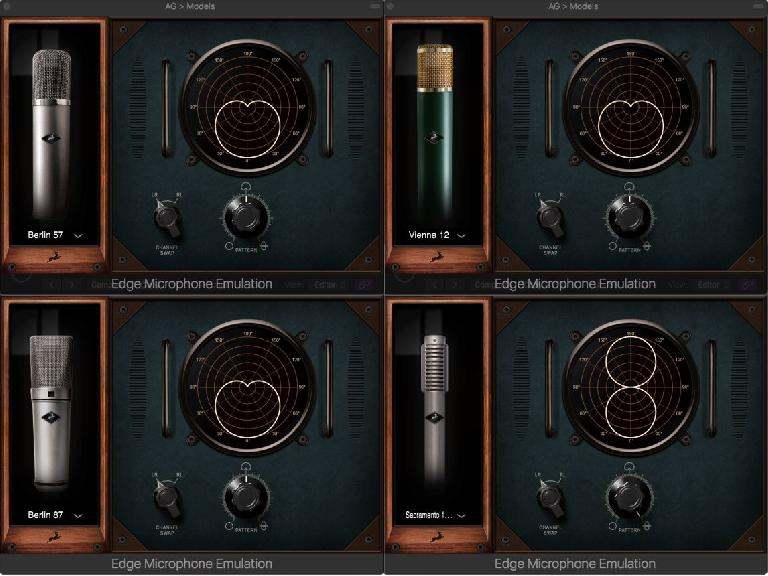 A few of the mic models

Most of the time this includes the usual choices of cardioid, figure-8, and omni, but for mics with additional patterns the options here would be more comprehensive as well.

I tried a number of mic models and patterns on a simple acoustic guitar recording. Not surprisingly, the actual classic mics being emulated are not directly named, but from the description and the images of each modeled mic it should be obvious (at least to experienced studio types) what they all are. The differences in tonality of the various models is subtle—as with the real thing—but each provides the distinct character of the original. The pattern variations are likewise subtle, but they do make a clear difference. Being very familiar with the sound of a number of the classic mics on tap, I felt the emulations did an excellent job of capturing the subtle character of each mic. In the following audio clip, you can hear the same short segment repeated with different mic models.

While the Edge family mics are not inexpensive, you definitely get what you pay for! The Solo is a good entry into the world of mic modeling, and the Duo and Quadro take it to the next level, with pattern control and extra flexibility. Couple that with the high build quality of the mics themselves and the classy packaging—including flight cases, and (for the larger models) shockmounts and pop filter—and the Edge family looks to be a winner. They’re definitely worth checking out, especially if you're looking for that one high-end condenser mic to be the do-all centerpiece of your studio.

Tom F
So how do they compare to other modeling mics, like the Townsend Lbs Sphere L22?
Joe A
I can't say, I haven't (yet) had the opportunity to try out the Townsned or the Slate systems.
John
I don't think that the Berlin 57 is a Neumann 57's U47. It's a Neumann UM 57.
Joe A
The documentation ("Berlin 57 comes straight from 1957") appeared to suggest that the "57" refers to the year rather than the model, but since the UM 57 was apparently released in 1957, that seems to be a reasonable conclusion. The rest of the (minimal) description could refer to either mic, (AFAICT in 1957 the U47 was still using the PVC M7 capsule), but since the Berlin 57 offers three polar patterns and the U47 had just two (cardioid and omni), I'd assume you're correct -- it's most likely a UM 57. Youâ€™d think that since the U47 is the more iconic mic, thatâ€™s what theyâ€™d choose to model, but maybe they didn't have one available at the time.