What if notes did more than trigger your sounds? Notes just do more in Bitwig Studio version 4.1, both on the timeline and in performance.

Notes help us make music, triggering our sounds both on the timeline and in performance. But what if notes did more? As signals that dance and curve, notes can truly be a creative force in Bitwig Studio. Operators gave new behavior and animation to sequenced notes, and with Version 4.1, eight new note effects are bringing a wealth of performance-ready possibilities. So with 20+ processors now included, we say...

Let There Be Notes!

While each note effect device has a focus of its own, some themes emerge. Many add randomization to each note that passes through. A couple of these musical tools make notes more similar, and others diversify them. Most of these devices put notes into motion, including three different kinds of “note repeats.” And this is all before you try two effects together, or add Bitwig's modulators to the mix. 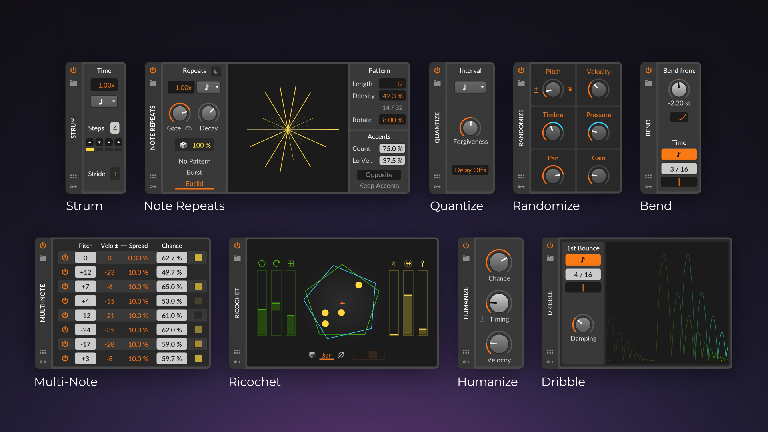 -Humanize gives feel to incoming notes. It does this by loosening their velocity, their timing, and even their chance of occurring. So this is equally appropriate for giving a little slush to each note of a chord, or for automating the “Chance” of notes flying out of an Arpeggiator, and more.

• Quantize holds notes until the next beat, with optional “Forgiveness.” Where Humanize can add timing variation to incoming notes, Quantize tightens the rope and groups notes at the next beat grid interval. But this obvious utility opens a world of other possibilities with its “Forgiveness” parameter. This could mean letting notes that are slightly late thru to preserve some humanity, or to open the threshold pretty wide and create wholly new rhythms.

• Ricochet treats notes as balls that bounce and collide. Do you want to play a game? Imagine each note is a ball, fired off into a room. When balls bounce off the walls — or hit each other — a new note is triggered at that velocity. And in addition to various physical parameters, “Spatialization” uses each ball’s position to effect that note’s panning (↔) and timbre (?) expressions. 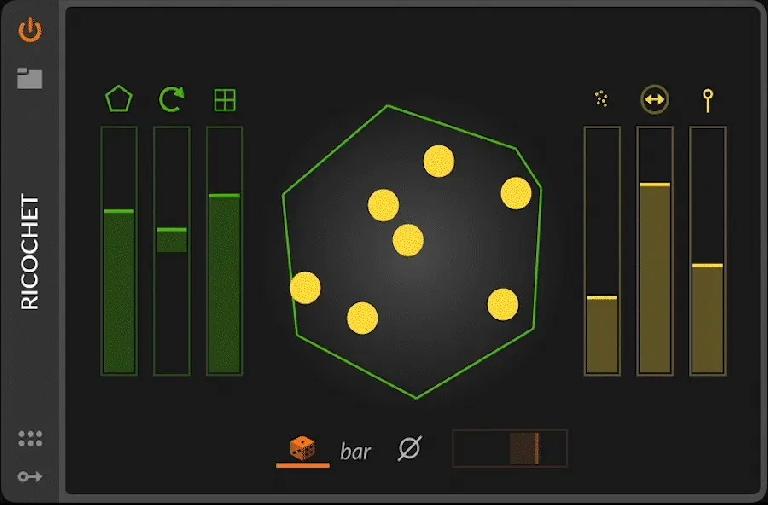 • Dribble bounces notes, until gravity wins. It bounces each note, relative to the velocity of the incoming note. The main parameter is “Damping,” which when all the way down means bounces stay the same length forever — another kind of note repeat. And the heavier the “Damping,” the shorter each bounce becomes. And don’t miss the “Shortest Bounce” parameter, for either removing or enhancing the ‘zipper’ effect when notes get too close to the floor. 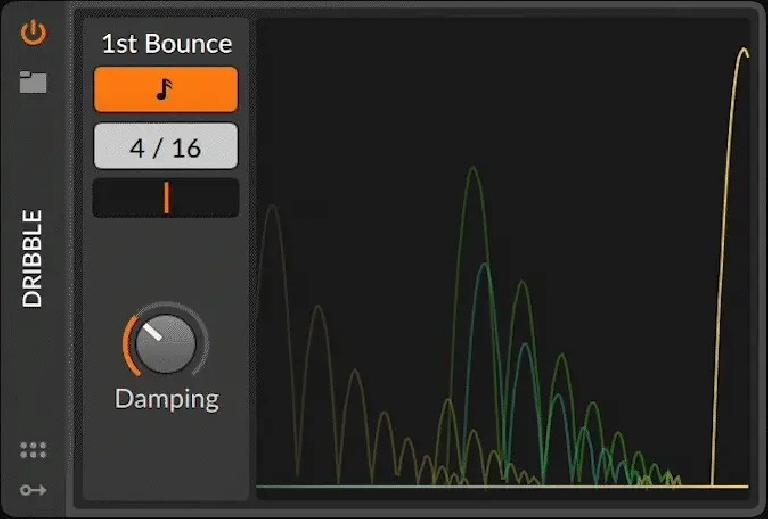 • Randomize adds chaos to any note expression, including pitch. Since Bitwig's audio engine does ‘true polyphony,’ this could mean randomness on the “Pan” position of each note. Or variety added to each notes “Timbre” or “Pressure,” particularly for MPE control sources (or compatible plug-ins). And while randomizing “Pitch” might seem of limited use, setting it to “Quantized” pitches would give you a drum groove whose notes occasionally shift from snare to tom, and so on.

• Strum fragments your chords, playing them one (or more) note at a time. Like the Arpeggiator, Strum is a device that collects all played notes and then pushes them out one at a time. Sequences can even be defined, with up to four steps for alternating between strumming up (lowest note to highest note) or down. And with the bonus “Stride” parameter, you can define how many notes are played at a time, in case you want to try more than one. But you could also think of this as a musical speed limiter, so try putting it at the end of a busy note stream to calm things down.

• Bend bends every incoming note from a different starting pitch to the pitch that was played. Every note has the same relative starting point, so this is like an alternative version of glide or portamento. And bending all notes before an Instrument Layer means each layer will receive an identical pitch curve.
And Note Repeats retriggers each note. In its simple mode, this is a flexible, modulatable version of the Repeats Operator, setting a speed, gate length, velocity decay percentage, and chance for each note retrigger. There is even a performance-ready “Disable” parameter, for flipping the repeat effect on and stuttering any notes already playing. But then come the pattern modes that shape the coming repeats into rhythmic patterns. “Burst” puts all notes in a row, and “Euclid” gives them a nice pattern, as if provided by nature herself. And with the various accent options, the results become richer for each note played. 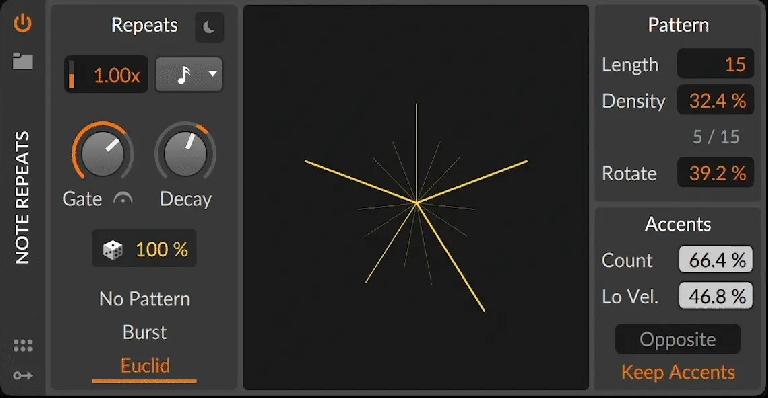 Every device is a tool offering new musical possibilities, and 70 new factory presets showcase some of what can be achievable with each of them. But these note effects are made to mix and match. Try a Dribble to make your chords kinetic, followed by a Strum to clean things up as a speed limiter. Or Bend a single note into Multi-note so that all notes glide together, then Humanize the output so they aren’t perfectly aligned. And when taken together with the Arpeggiator, Micro-pitch, HW CV Instrument, or your favorite plug-in — new ideas are just waiting to be found.

See and hear them in action at Bitwig.com.

•Color palettes are now available for clips and layers. So if you want to turn an image into a palette, just drop a JPG or PNG into the Bitwig Studio window.

•Track MIDI output is now directly available in the track (and or via the HW Instrument device when you need delay compensation).

•Bitwig Studio’s Sampler now has a Release chain, where each note release triggers an instrument of your choice. So you can now import an SFZ file with both press and release samples, or try out a synth or VST to make any sound newly responsive.

•Multi-note (Note FX) still turns individual notes into chords of up to 8 notes, and it now offers “Chance” and velocity “Spread” settings for each of the 8 note slots. And modulating the enable switch or the pitch of each note is now realized immediately as well.

•Note Length (Note FX) can still trigger an instrument or layer on note release, and like the new options in Sampler, you can now select whether the note on or note off velocity is used.

•Note Filter (Note FX) will still “Keep” only notes in a set pitch and velocity range, and it now has a “Reject” mode as well. So once a range is defined, just duplicate the device and flip the mode to get all the other notes. And then the note processing can begin...

Discover how to get creative with Bitwig Studio 4 in this advanced course, created by producer and Bitwig Certified Trainer Thavius Beck. 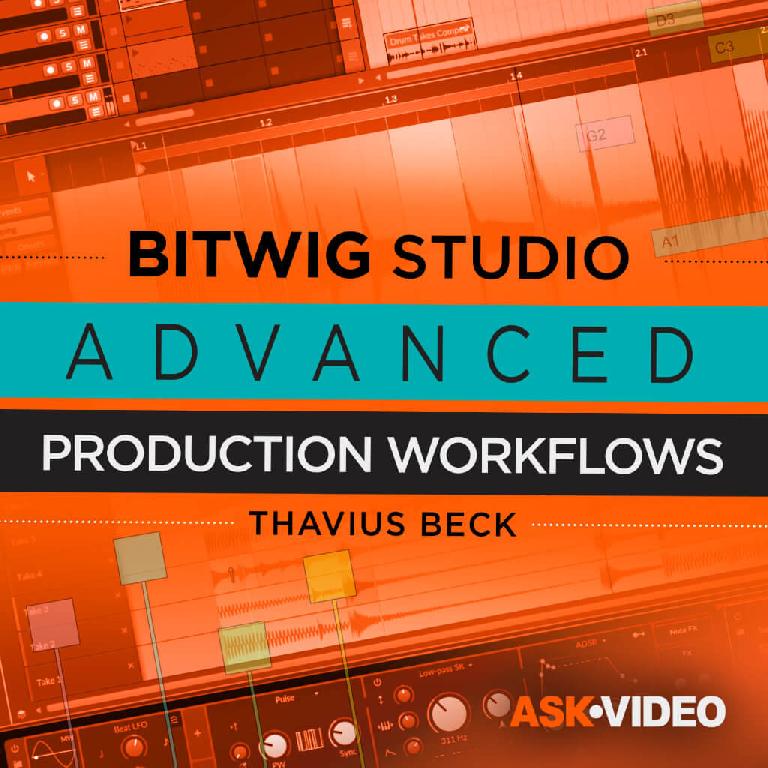 And be sure to checkout AskVideo's ever-expanding collection of Bitwig Studio courses.