For those new to Logic’s Virtual Instruments, here’s a brief overview of the synths on tap.

The Babies & the Big Boys

For this overview, I’m going to break up Logic’s synths into two groups—the Baby synths, and the Big-Boy synths. All come with a good supply of factory presets, but all are also user-programmable, for the more adventurous synthesists. The “Babies” are five smaller synths, each of which specializes in one specific type of synthesis, with simplified control sets—they’re ideal for synth novices to cut their teeth on. The “Big Boys” are Logic’s four main synths—all feature substantial programming options, and most are capable of multiple types of synthesis—a collection that hits all the bases and then some, for any synthesist’s needs. I’ll start with the Babies.. 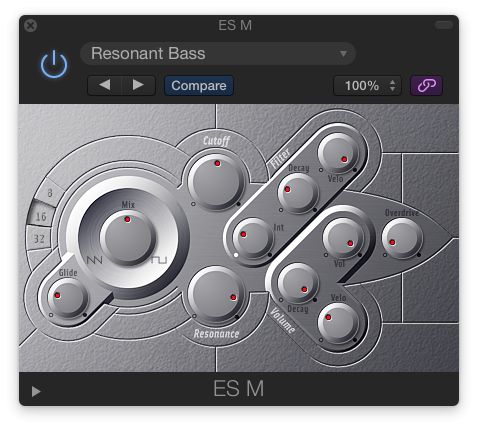 The ES M is a simple mono analog-style synth.

All of Logic’s “Baby” synths (as well as the “Big Boy” ES2) use the “E” designation, which dates back to Logic’s pre-Apple days as Emagic. The ES M is a simple mono analog-style synth, that Logic recommends for “bass sounds that punch through the mix”. It starts with a simple dual-oscillator. In keeping with classic “Subtractive” analog synthesis, there’a a traditional Lowpass Filter, with Cutoff & Resonance controls, and, while there’s no full ADSR, there are Decay controls for Filter and Volume, which can also be controlled via Velocity. While not a full-enough feature set for general-purpose synthesis, there’s just enough programming control to dial up a variety of good analog synth bass tones. 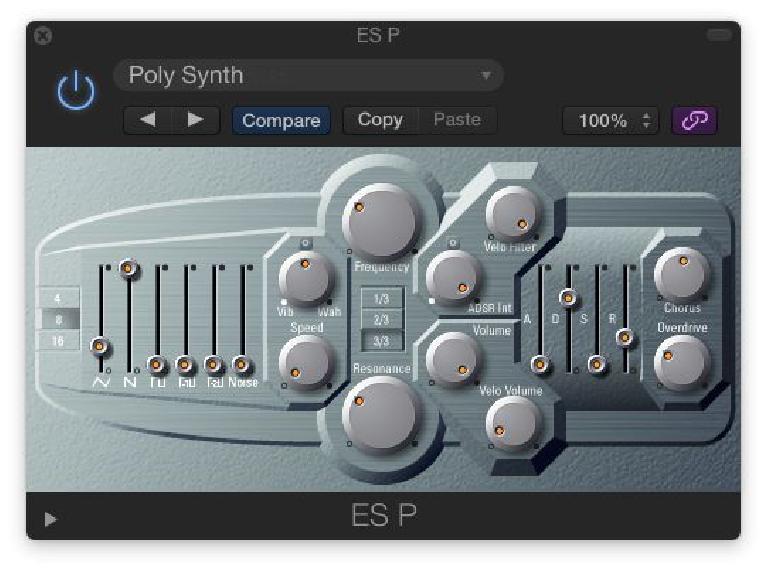 ES P is an 8-voice poly synth that “emulates classic polyphonic synths of the 1980s”—by this I’ll assume they mean those classic analog Roland models. The Oscillator section lets you mix multiple waveforms, plus Noise, and there’s a more full-featured LPF and proper ADSR, all of which can be Velocity controlled. An LFO is added for classic modulation effects, and there are even Chorus and Overdrive FX, for a little character. ES P would be the perfect virtual analog synth to learn about the architecture and programming of traditional analog synthesizers—all the main controls are provided, but without the distraction of an overly complex front-panel. 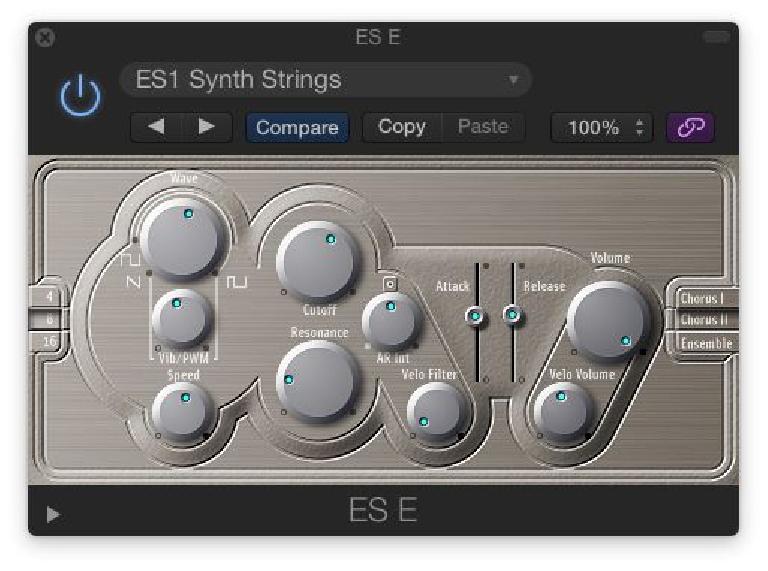 The ES E is great to create warm pad and ensemble sounds.

ES E is for synth pads (the “E” stands for Ensemble). Its simple controls are similar to the ES M’s—Oscillator, basic LPF, AR envelope, and Velocity controls. But ES E incorporates modulation for three Chorus options, including a thicker Ensemble mode. The simple control set and Attack slider make it easy to dial up nice chorus-y pads, which is this synth’s raison d’être. 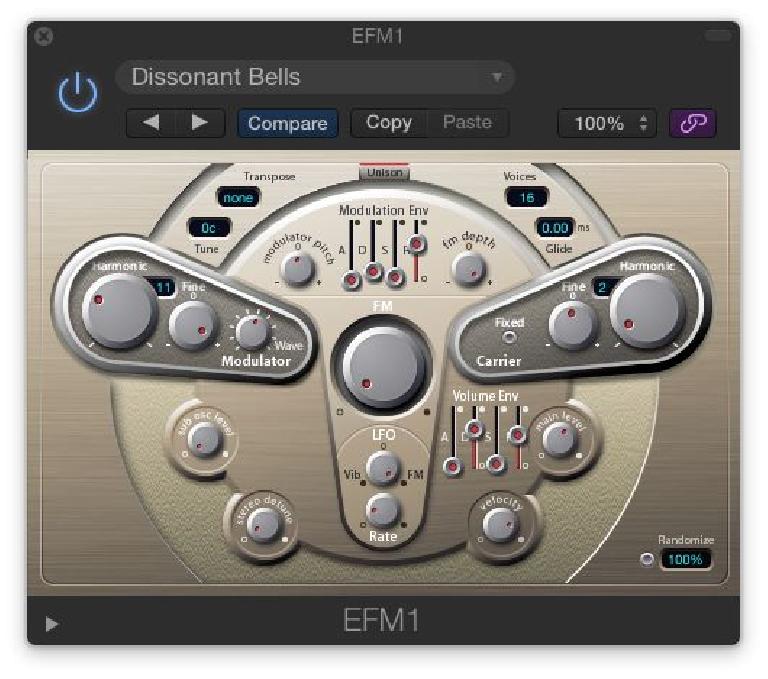 The EFM1 is a simple Frequency Modulation (FM)  synth.

The EFM1 is Logic’s attempt to provide a simple design for a complex type of digital synthesis—FM synthesis, as popularized in the '80s primarily by the Yamaha DX7. The rich bell-like tones of FM synthesis were hugely popular when the DX7 first came out, but FM fell out of vogue after a while, probably due to its distinctive but sometimes same-y quality, and the complexity of programming sounds, which was beyond the comfort zone of most synthesists versed in analog designs.

The EFM1 is a little more complex than the other E-synths here, but still quite simple for a model based on FM. In FM synthesis, waveshapes are produced by two oscillators (Modulator and Carrier), with one Frequency-Modulating the other (that’s what FM stands for), producing often metallic/clangorous overtone structures not possible with traditional analog oscillators—the relative tuning between Modulator and Carrier determines the overtone content and timbre of the sound. EFM1 adds Modulation (tone) and volume envelopes, along with a few additional controls. It’s quite a bit simpler than the DX7 and other classic FM synths, but it’s still somewhat tweaky, especially compared with the more predictable controls in an analog synth—fortunately, a suitable collection of presets is provided, to be used as is, or reverse-engineered for learning purposes. 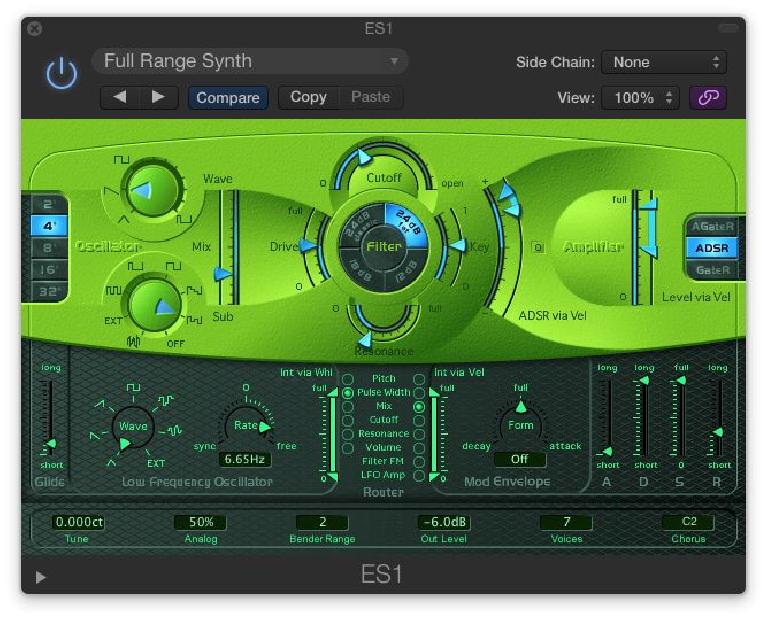 The ES1 is a full-featured analog synth.

The ES1 is kind of a bridge between the simplicity of the other E models and the daunting complexity of the much more elaborate ES2. It’s a full-featured analog synth, with two Oscillators, Lowpass Filter with controls for Cutoff, Resonance, and Slope, and full ADSR for Volume and Filter, with Velocity control of all relevant parameters. To this basic control set ES1 adds some Global controls, a Chorus, and two Modulators, each of which can be routed to control one of a number of synth parameters via a simple modulation matrix, which is a precursor of the more complex Mod Matrix featured in the “Big Boy” ES2 (and Logic’s EXS sampler).

At the grown-up’s table—Retro Synth

And that gets us to the “Big Boy” synths, starting with Retro Synth, one of Logic’s newest additions to its stable of virtual synthesizers. 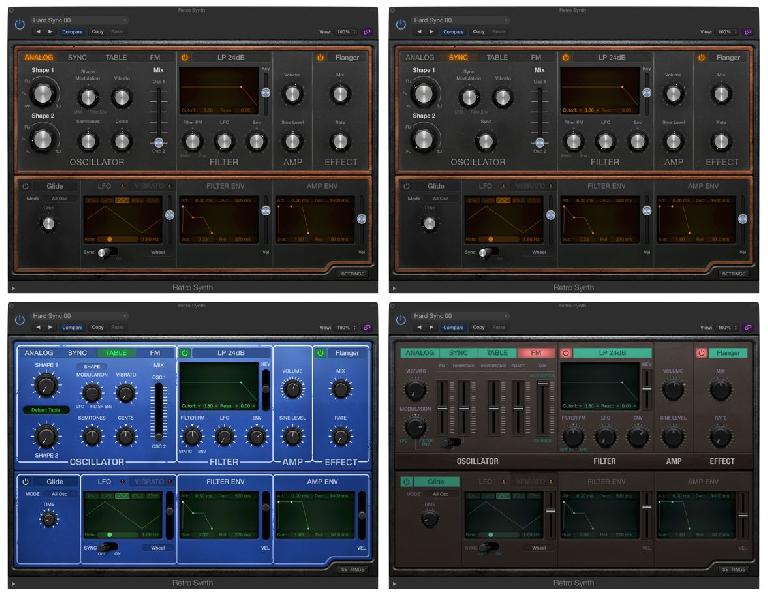 The Retro synth, Analog, Sync, Table and FM all in one!

If you took all the “E” synths I just went through, added a few more advanced features and effects, and combined them all into one plug-in, what you’d get would be something that looked an awful lot like Retro Synth. This is Logic’s attempt to create a full-featured synthesizer with a wide range of programming options and sounds, but still maintain an interface that would be more immediately accessible to musicians and producers than the very complex parameter sets and front panels of most of the other “Big Boy” synths, which can be a bit daunting at first glance.

Retro Synth emulates 4 classic analog and digital synths, presented in 4 separate skins, which, if you’re even remotely familiar with the originals they’re (loosely) based on, you’ll be able to identify with no trouble. They’re officially called Analog, Sync, Table, and FM, but the inspirations for each are pretty obvious... Analog, with its traditional oscillators, filter, and ADSRs, is based on classic analog models like the Minimoog. Sync provides the “hard sync” effect you get from syncing one oscillator to another (as found on some Prophet models), which creates new, edgy-sounding waveforms (see this article on Retro Synth)—this is also sometimes referred to as “Phase Distortion” synthesis, ala Casio’s classic PD synths. Table refers to Wavetable synthesis, where sounds are created by combining single-cycle or short waveform snippets into a new complex wave—the graphics here clearly pay homage to the PPG Wave, a classic wavetable synth from the '80s. And, of course, FM harks back to the digital FM sounds of the DX7, both sonically and visually. All of these models are very straightforward to use and program—what they sacrifice in high-end flexibility is more than made up for in ease of use and sound-quality. 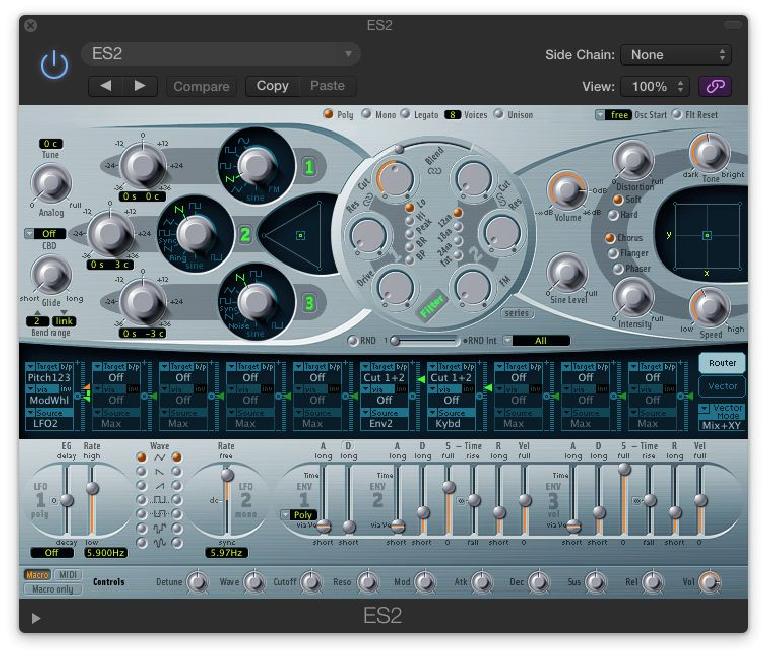 The ES2 picks up where the ES1 leaves off, and then leaves its kid brother in the dust, with a powerful, complex feature set. ES2 combines the traditional oscillators and filters of subtractive analog synthesis with FM synthesis and even Wavetable synthesis. It’s three multi-waveshape oscillators can either be blended (analog) or modulate one anther (FM), and each oscillator has a position where you can alternatively dial up preset digital waves, for Wavetable synthesis. There’s also a Noise Generator for good measure.

ES2 boasts a pair of Filters (one multimode filter, one LPF), two ADSR envelopes, and an extra AD envelope, all Velocity controllable. There’s even a user-configurable Vector Envelope, a really cool feature which is just too complex to describe in this brief overview.

Modulation sources include a pair of multi-waveform, assignable LFOs, and an X-Y Planar Pad, another very cool but complex feature. The feature set is rounded off by an effects section, which includes Distortion and a Chorus/Phaser/Flanger. But the heart of the ES2 is its Modulation Matrix (Modulation router), which gives you 10 routings that let you direct almost any modulator (including external MIDI mod sources) to almost any destination parameter on the ES2 front panel, with independent mod intensity and scaling control for each routing. This is like having a modular synth, where you can patch the different components together in creative ways well beyond the pre-wired options designed into the front panel itself, and this kind of flexibility is the hallmark of a high-end synth (see this article on ES2). 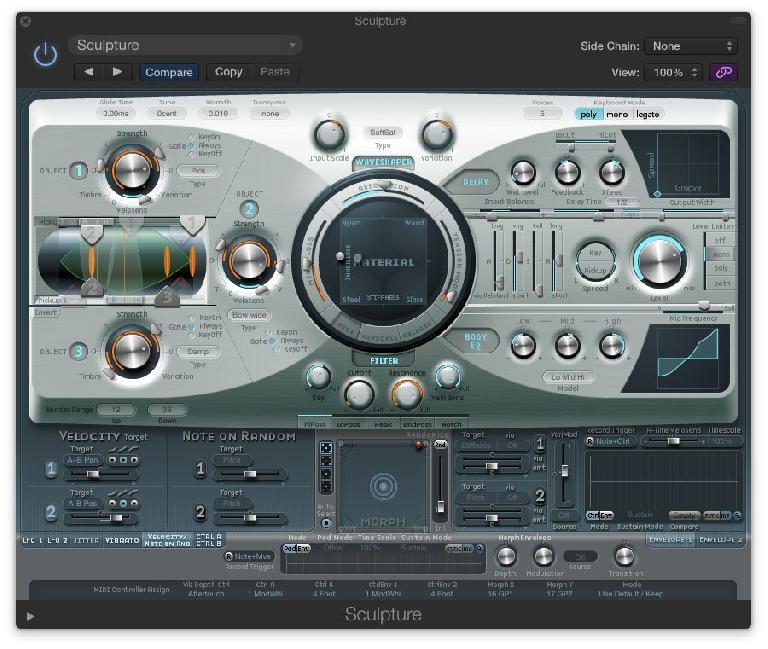 Sculpture is a Physical Modeling synth.

Sculpture is a bit different from all the other synths here—it’s a specialty instrument that creates sounds via physical modeling, rather than any traditional analog or digital synthesis (or even sampling) techniques. Physical modeling is a method of sound creation/modification, where the actual physical elements of a sound source or processor are analyzed and then recreated/simulated in software. Many virtual acoustic instruments—from strings to pianos—use this technology as an alternative to sampling (it’s the basis for Logic’s own Vintage Electric Piano, Clav, and B3 virtual instruments). For modeled instruments, the idea is that since the mechanics of sound production are emulated, a modeled virtual instrument can be made to respond as expressively as a real, physical one. Plus, while emulation is one application, physical modeling can also be used to create cool, organic, natural-sounding/playing virtual instruments that don’t (or couldn’t!) actually exist in the real world.

There’s where Sculpture fits in—it provides the tools of physical modeling, combined with some traditional synthesis parameters, and a whole host of modulation and effect parameters. Instead of traditional oscillators, filters and envelopes, there are Exciters, Disturbers, and Resonators to create sound waves based on (respectively) different vibrating media—wood, steel, glass, etc.—emulate different physical methods of sound production—striking, plucking, bowing, blowing, etc.—and shape the tone and character of the virtual instrument, real or imaginary. Obviously, there’s no room in an overview to get too deeply into all of this, but suffice it to say if you’re interested in unusual but organic instruments or sound effects (especially for post-production sound design), Sculpture is definitely something you’ll want to spend some time checking out. 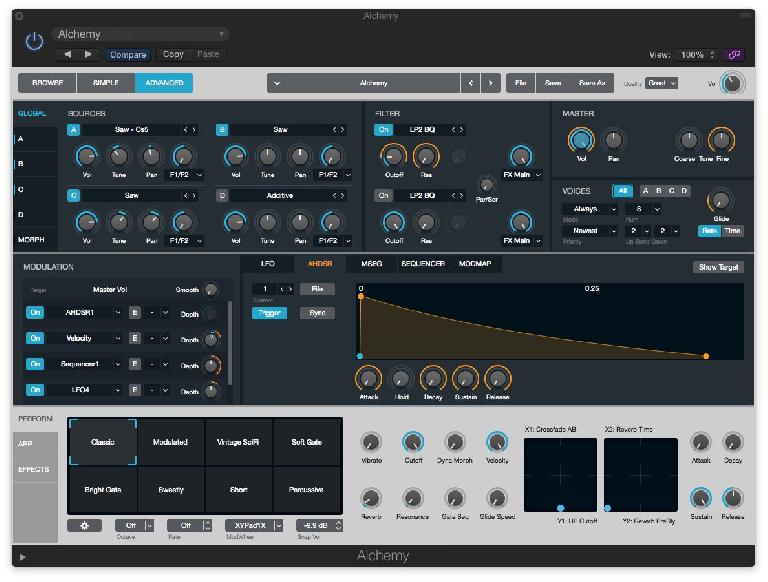 The most recent addition to Logic Pro is Alchemy. It's a monster synth!

Alchemy is  the newest addition to Logic’s synth collection, integrated into Logic when Apple acquired Camel Audio a while back. Since I’m running out of room, I’m afraid I’m going to be giving Alchemy short shrift, but that would be inevitable, anyway, seeing as it would take several articles to fully describe this beast. Alchemy incorporates sampling and sample manipulation with additive, specular, granular synthesis, and resynthesis, wrapped up with an extensive set of programming controls and effects.

An Alchemy patch incorporates four independent sound sources, each of which can include multiple elements from its various categories of sound production. Each has its own filter and modulation parameters, and of course there are global filters and effects as well. The interface is deep, and the possibilities for sound creation and manipulation could keep an eager synthesist busy for days/weeks/months exploring its powerful options for creative control. Fortunately, there’s also a very comprehensive preset library for those who need to jump right in and start making music. With all its options and capabilities, it seems like Alchemy will be taking its place as the new King of (Logic) Synths.

And with that, I’m out of space. Every one of Logic’s synths, from the simplest, most efficient, to the biggest, baddest, do-everything models, is capable of adding good sounds to an arrangement, when matched with the right song and a good player. All of them are worth a little (or more than a little!) time spent getting to know what they have to offer.