An Introduction To Track Stacks In Logic Pro X

Language
New to Logic Pro X? You probably have some questions about one of the big new features: Track Stacks. Mo Volans explains the two types, shows how to use them both in the mix and when composing.

Logic Pro X is well and truly here. All in all, reactions have been positive, the new interface is slick and the drummer feature is really impressive. All the flash, new features and toys aside, one of the standout improvements has to be Track Stacks. Simply put, this is probably the best workflow enhancement in the whole package.

In this tutorial-article, I'll run through how to set up a track stack and some of the different ways you can use them to enhance your mix and generally tidy up your projects. By the time you've mastered this simple feature, you might wonder how you lived without it.

What is a track stack?

We've always been able to send multiple audio streams to a bus in Logic. Up until now, this process has involved creating an auxiliary channel (or bus) and choosing this output in the tracks we want to route to it. Simple, effective but not particularly elegant.

When you consider that Ableton and Reason both have dedicated devices capable of combining several instruments with just a few clicks, it's only fair that us Logic users get something similar.

Track stacks can essentially do the job of both the group bus and Combinator style instruments we have seen in other DAWs. The implementation is very slick and due to a couple of different modes, the whole thing is very flexible indeed.

Essentially, you can use stacks to either group several mix tracks, merge audio streams and even trigger and control numerous software instruments at once. Let's take a look at the two modes and the differences between them. 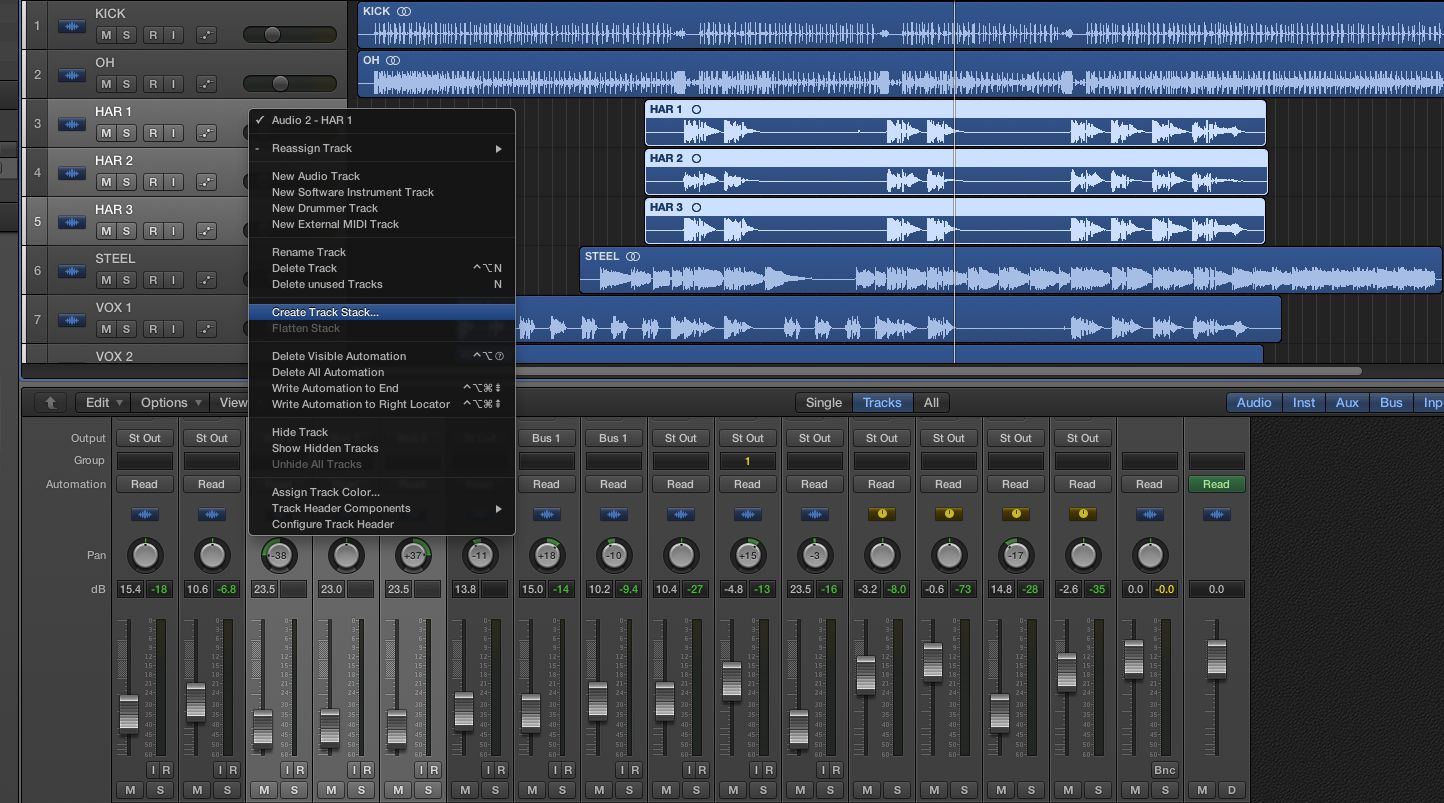 Creating a Track Stack is straightforward whichever method you choose.

Once you have chosen your creation method, you will be presented with the choice of two track stack flavors. Folder or summing mode. There is a brief description for each in a small fold down menu so if you ever forget the differences this info can be recalled.

A folder track is just that. Simply a folder that contains the tracks. Some global control is possible by way of a master fader but all your audio (or instrument) tracks stays routed to original outputs and will be processed and treated separately. This mode is great if you just want to keep a group of tracks contained and organized but don't need anything more than that. 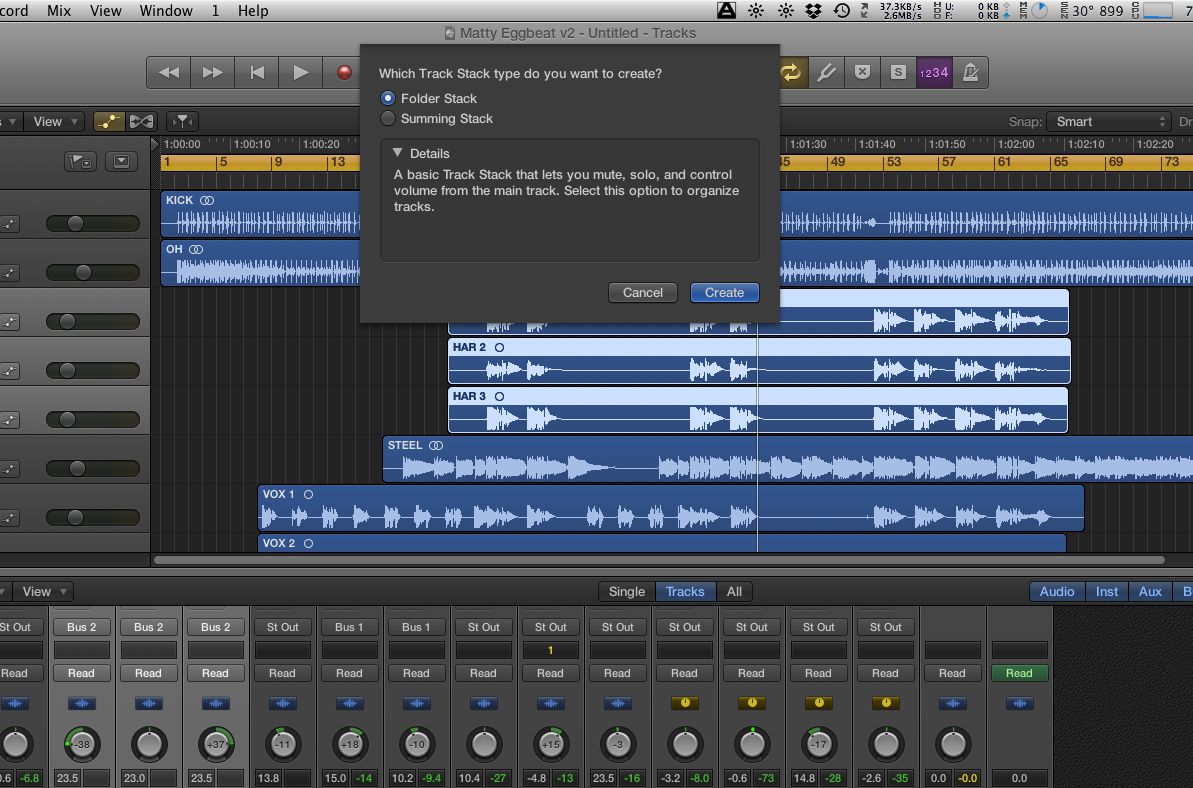 Folder stacks are excellent for tidying up your project.

The second option is a 'Summing' track stack. This is the real money shot and is probably the mode the majority of us use on a regular basis. Once activated, the summing stack looks almost identical to its folder-based counterpart. The only real difference is a slight color change and the addition of a level meter in the new 'summed' group. 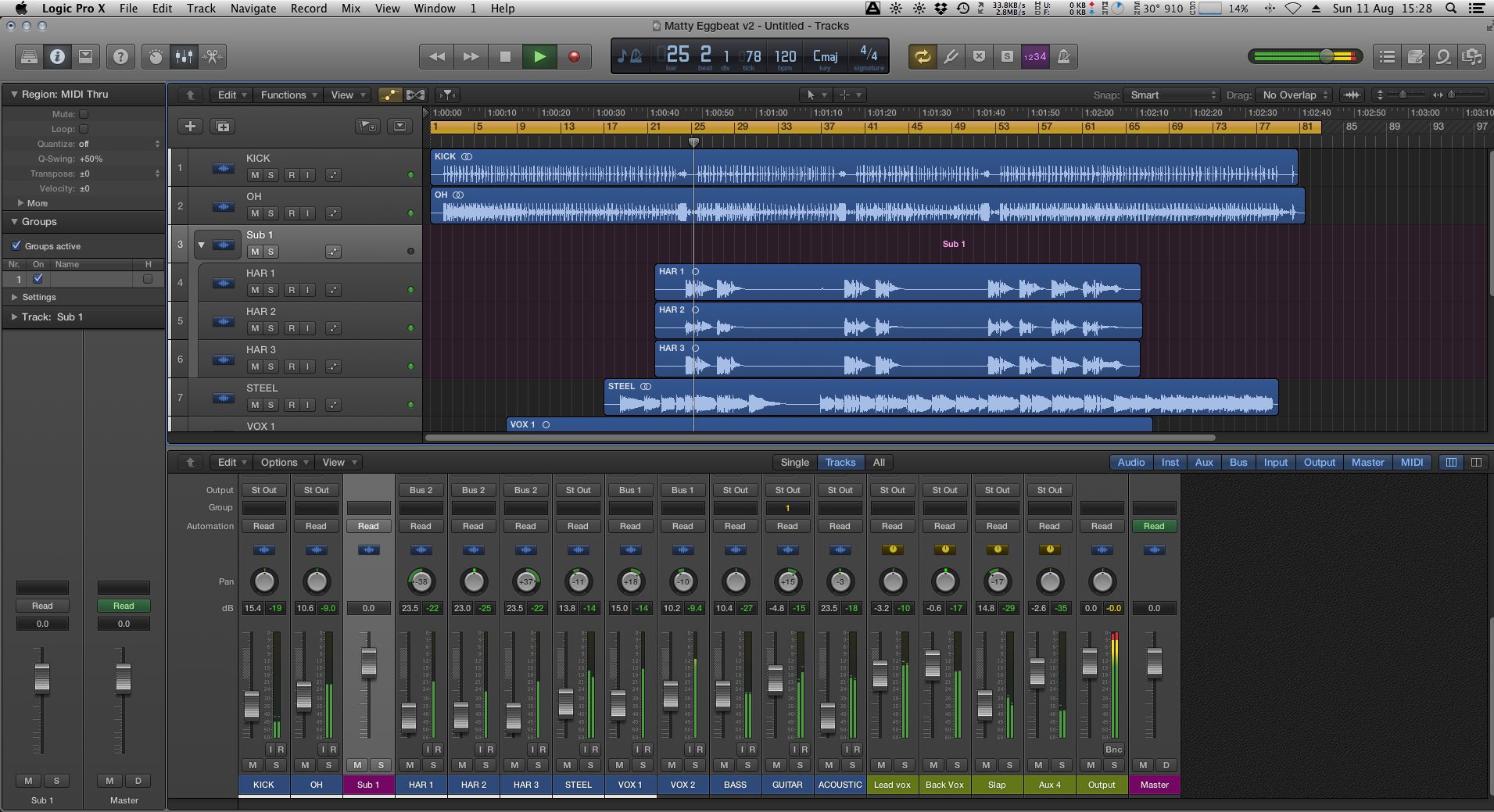 A Folder track in action with its basic control fader.

The real difference here is what's happening under the hood. A summing track stack actually combines the signal of any tracks that it contains. This means you can use it as a traditional group and treat multiple streams as one single bus. 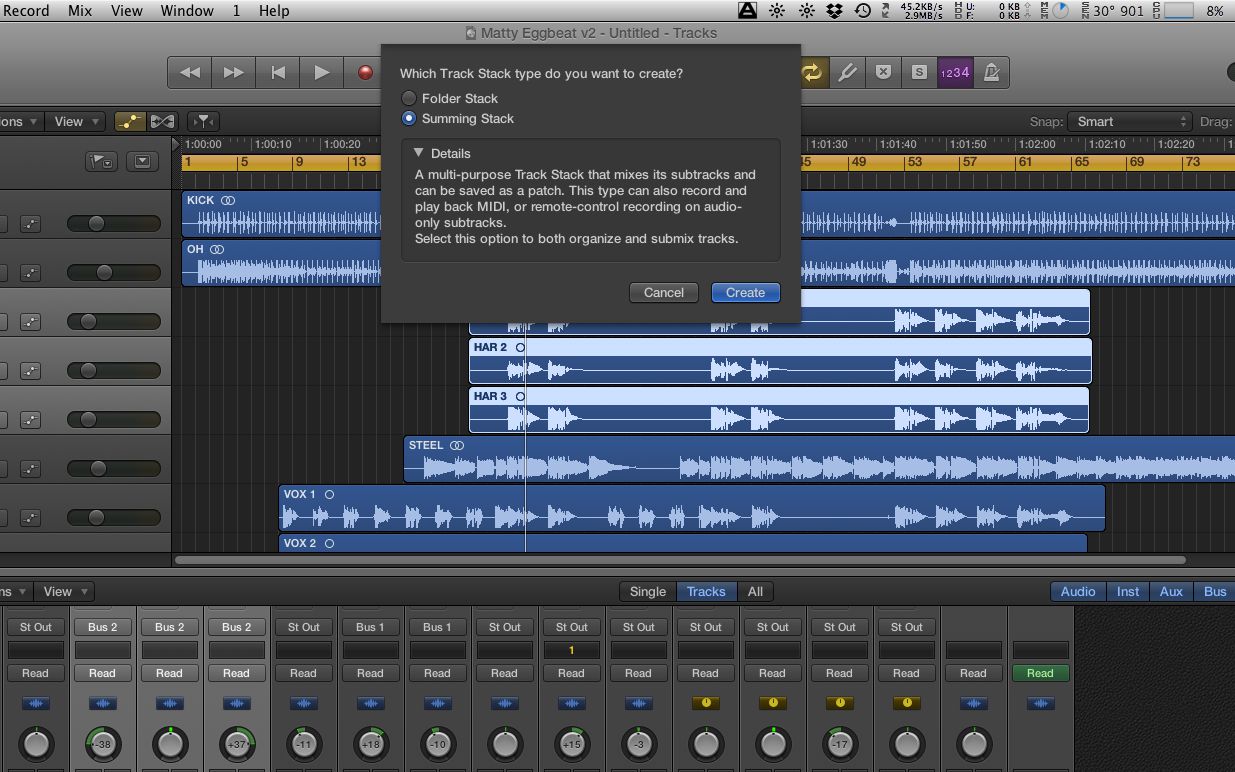 Summing stacks will give you a fuller set of features and capabilities.

The real bonus here is that when you combine instruments you can actually control several at the same time. This literally opens up a whole new dimension when it comes to MIDI programming. Let's have a look at a few ways the different modes could be used.

Track Stacks In The Mix

One of the most obvious uses for track stacks is going to be grouping similar instruments in your mix. I have already been using the stacks feature for this and I have to say it has saved me a huge amount of time and just made my projects so much more streamlined.

Drum tracks are prime candidate for your first track stack. Simply select every drum-based track in the arrange window and create the stack, on this occasion I would opt for the summing mode as it will give you more flexibility when it comes to processing and automation. 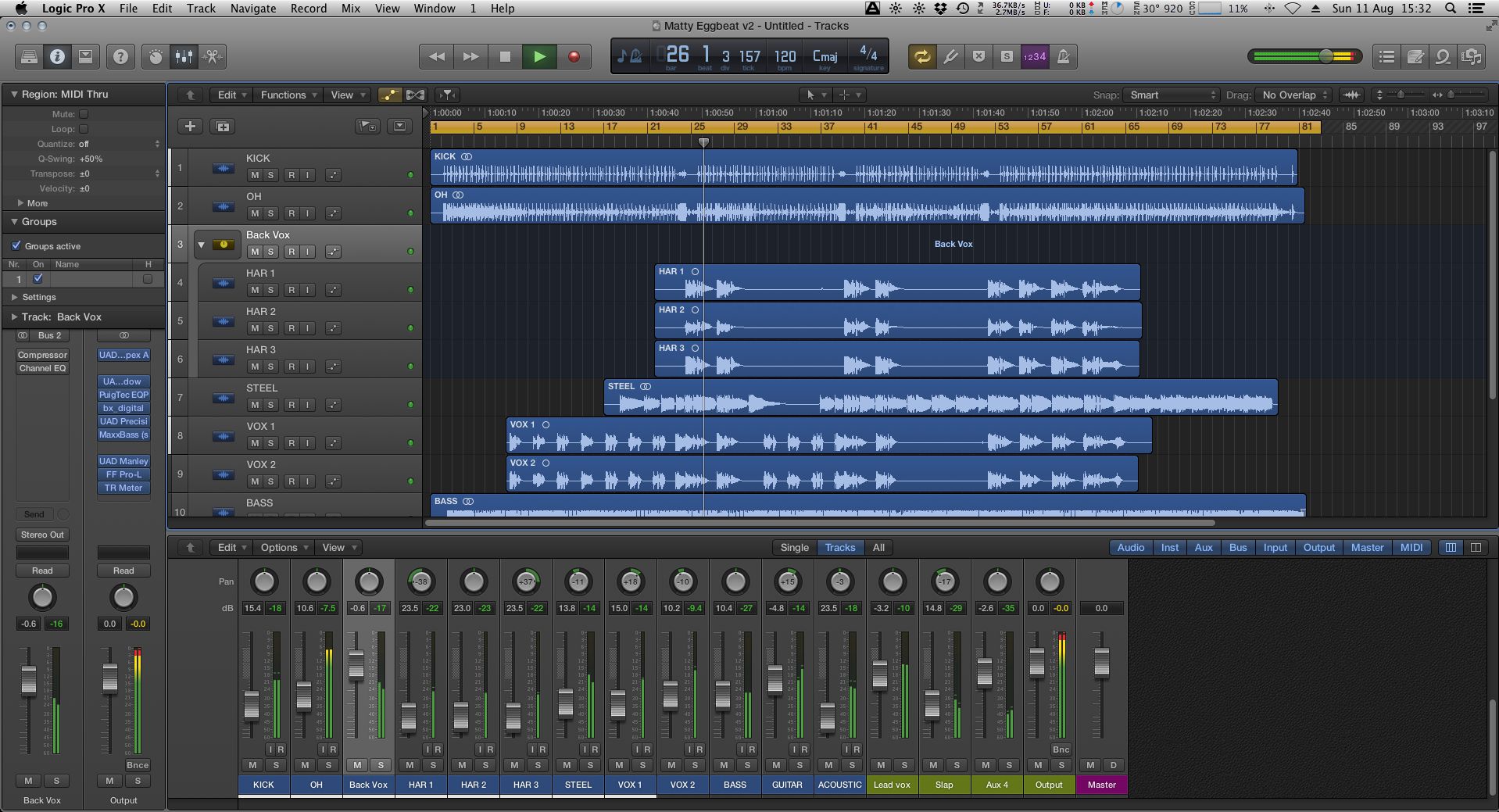 A collection of drum tracks being mixed with a summing Track Stack.

In Logic Pro 9 you would have had to send these tracks to an Aux channel and then create a track group to get anything near the same sort of result we see here. Now, you can easily fold your tracks to tidy up the arrange page and the cut down view will also be reflected in the mixer.

One improvement I would like to see in this area is an arrow or control to collapse and expand the new stack on the mixer. This would mean you can access all tracks regardless of where you are in the interface. Maybe this will be introduced in a later update.

With your drum stack created, bus compression, EQ and saturation can be quickly inserted and the overall level is easily adjusted. This process is so quick once you have performed it a couple of times, you'll probably find yourself taking it for granted. This is often the way with well implemented updates.

Although the system works very well in the mix, it really shines when you start to populate your stacks with virtual instruments. It was possible to trigger several instruments at once in Logic Pro 9, if you were some kind of environment ninja, but in reality it was a bit of a drag and not very intuitive.

By packing your soft synths into a summing track stack, you immediately get to control all of them from a single keyboard. Building super stacked instruments in this way has been something I've really enjoyed since upgrading to Logic Pro X. 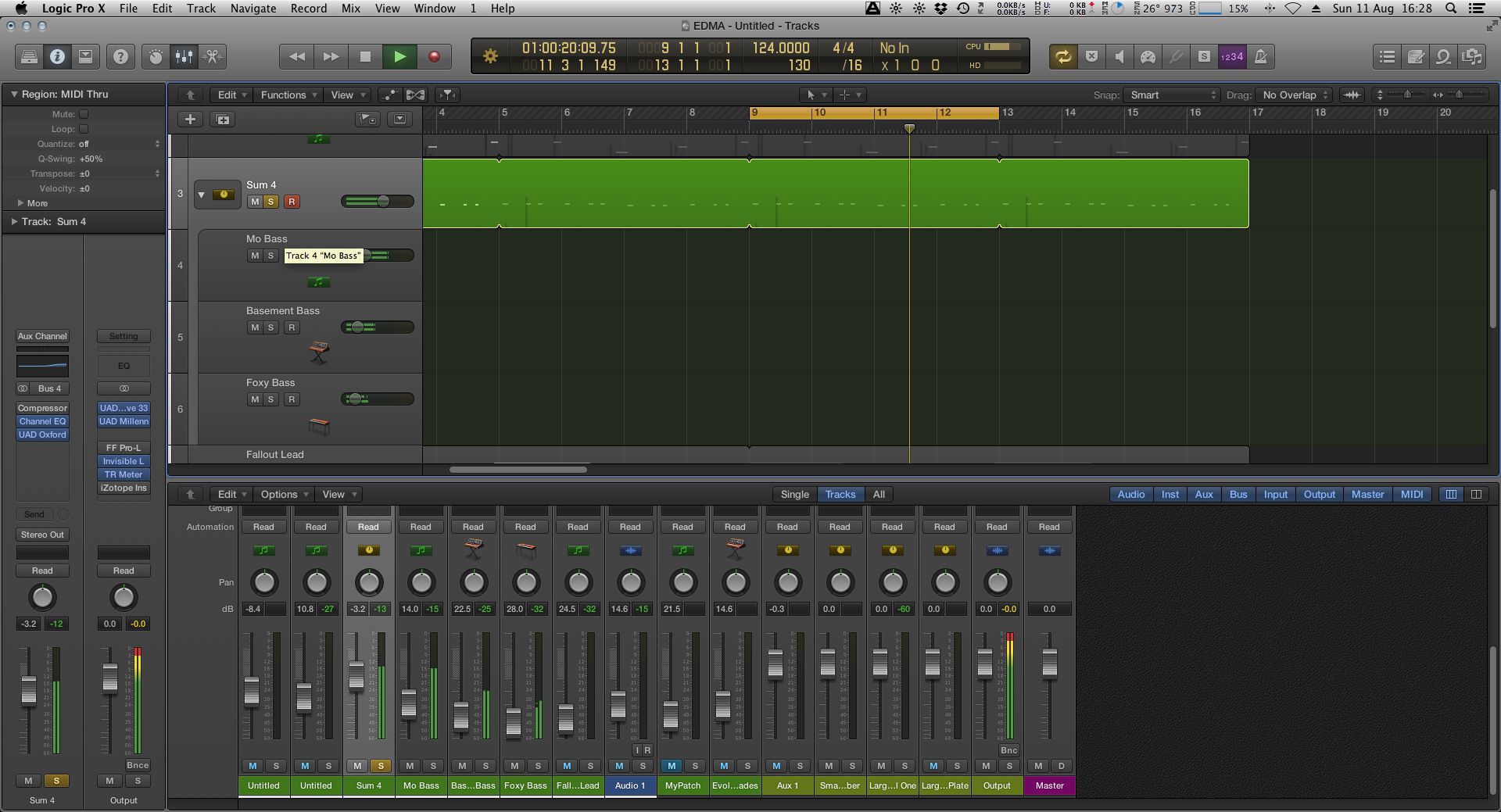 Several synths can be triggered with one piece of MIDI.

You should find yourself creating textures that you might not have thought of before, and remember you can easily control the level, processing and pan of each instrument in your stack.

Of course, controlling a large group of tracks with a single fader is pretty useful but track stacks give us the opportunity to do more than just simple tasks. By double-clicking on the track stack's icon you'll bring up the groups smart controls. 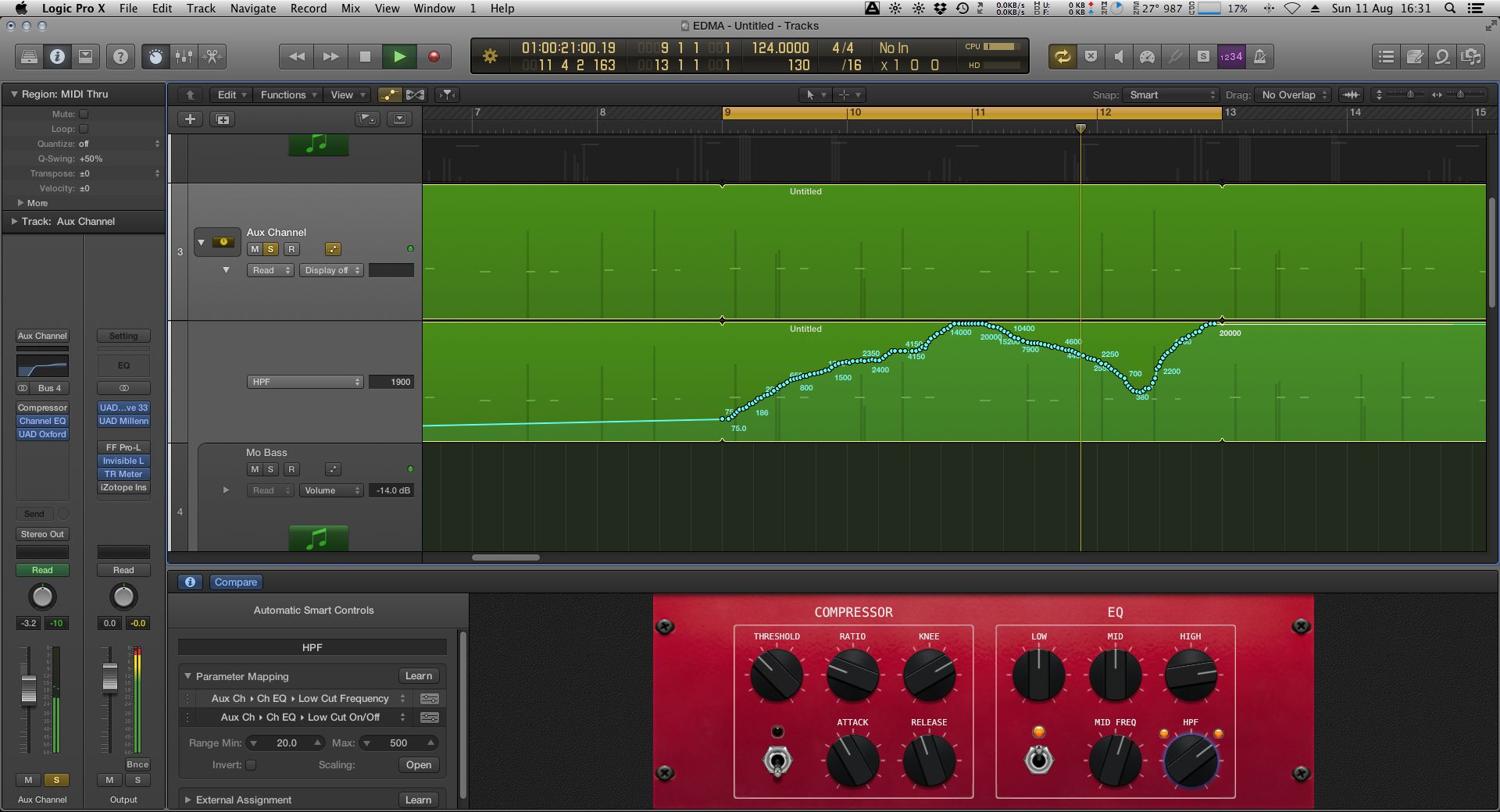 By default, this is an EQ and a compressor but in reality you can edit the parameters (and interface) to create the exact controls you need. To demonstrate the power of this you can see in the image above that I'm automating a high pass filter over a group of audio tracks with a single smart control. Good stuff!

Dave DeLizza
Mo, great tutorial. I've been playing with these for weeks and I was thinking that I got it, but this certainly helped.

I've been doing a Steven Slate drums 4 multi output that I have to import from every other project I use it in. Now, would i be able to set up all of the outputs and the actual instrument strip as a patch? Am I correct in assuming that?

In your point 3 above, you asked for ".. an arrow or control to collapse and expand the new stack on the mixer."

You can already achieve this as follows:
In the local Mixer menus, go to View, and enable Follow Track Stacks.

When you open and close a Stack in the Main window, it will also open or close in the mixer.

Not exactly what you wanted, but a start.....