The basic approach to multi-miking a full drumkit is straightforward: individual mics are placed close to each drum (and hihat), and these signals are combined with a stereo pair of overhead mics that pick up the cymbals along with the full kit. The overhead mics capture the entire drum kit (except for the kick), and the close mics add punch and low end. But while the general contours of the process are easy enough to grasp, as with so many aspects of studio recording the devil is in the details. Here are just a few quick tips regarding drum miking..

While multi-miking is the standard for modern drum sounds, when that’s not an option it’s still possible to get a great sound from just a pair of overheads and a dedicated kick drum mic. It’ll be a more natural in-the-room drum sound of course, but that kind of drum tone can work well in many musical styles. Since the kick points away from the overhead mics, it’ll need it’s own mic (in the front), and sometimes an (optional) spot mic on the snare can fatten up the tone of that drum, but the overheads will be responsible for 90% of the drum sound.

Various standard stereo miking techniques are used, and if the mics are carefully placed they can provide a good stereo image of the drumkit. Sometimes special variations like the “Glyn Johns” method (stereo overheads + kick (+ optional snare) mic) are employed—in this approach the overhead mics are equidistant from the snare (and kick), to center those drums in the stereo image, with one of the overheads higher above the kit, and the other lower, to the side of the floor tom. This approach yields both a good level balance and a nice (centered) stereo image. 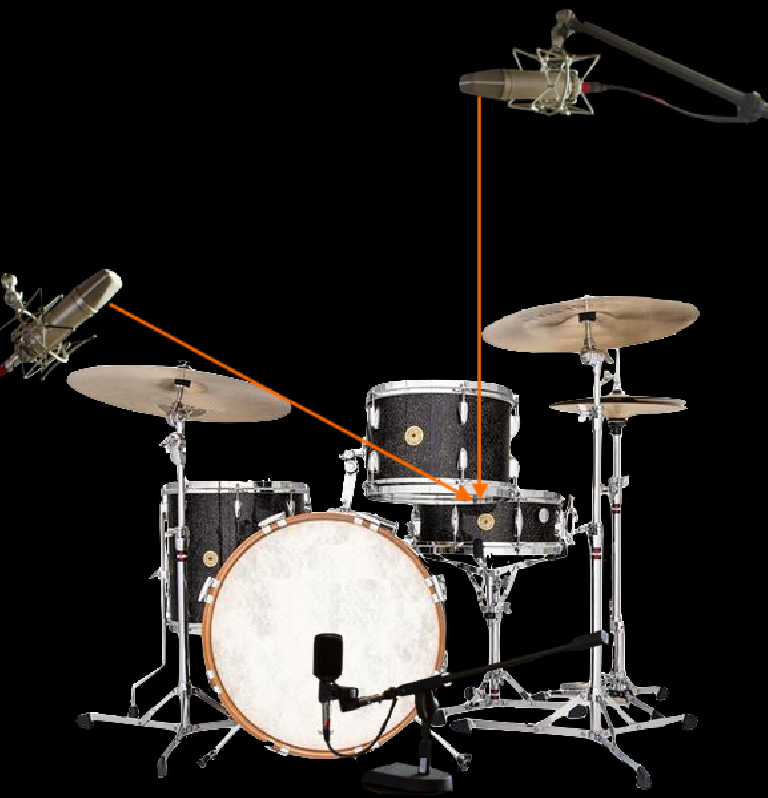 For most drums one close mic is positioned a few inches from the drum, aimed either across the top drum head toward the center of the drum skin or down at the edge. But the most important elements of the kit—kick and snare—are often captured with more than one close mic.

Usually the kick drum mic is pointed at the front drum head, at a hole in that head, or positioned in that hole; if the front head is removed (for a tighter studio kick sound) the mic may be placed inside the drum, where it’ll pick up more of the beater impact on the beater head. Sometimes an inside-the-drum kick mic or a mic stuck in the hole on the front head will be combined with an outside mic a little further back, to combine a tighter sound and a boomier sound.

It’s very common to close mic both the top and bottom drum head of the snare drum. The top mic picks up the “thwack” of the drum and the bottom mic captures the bright buzzy snares rattling—in the mix these can be combined for the ideal balance between thickness and crispness. Since the top & bottom heads vibrate in tandem, the bottom mic will pick up a signal that’s in reverse polarity to the top mic’s signal—this can result in a thinner sound, so the polarity (“phase”) of the bottom mic is usually flipped (on the mic preamp) to provide a fuller snare sound when both mics are combined. 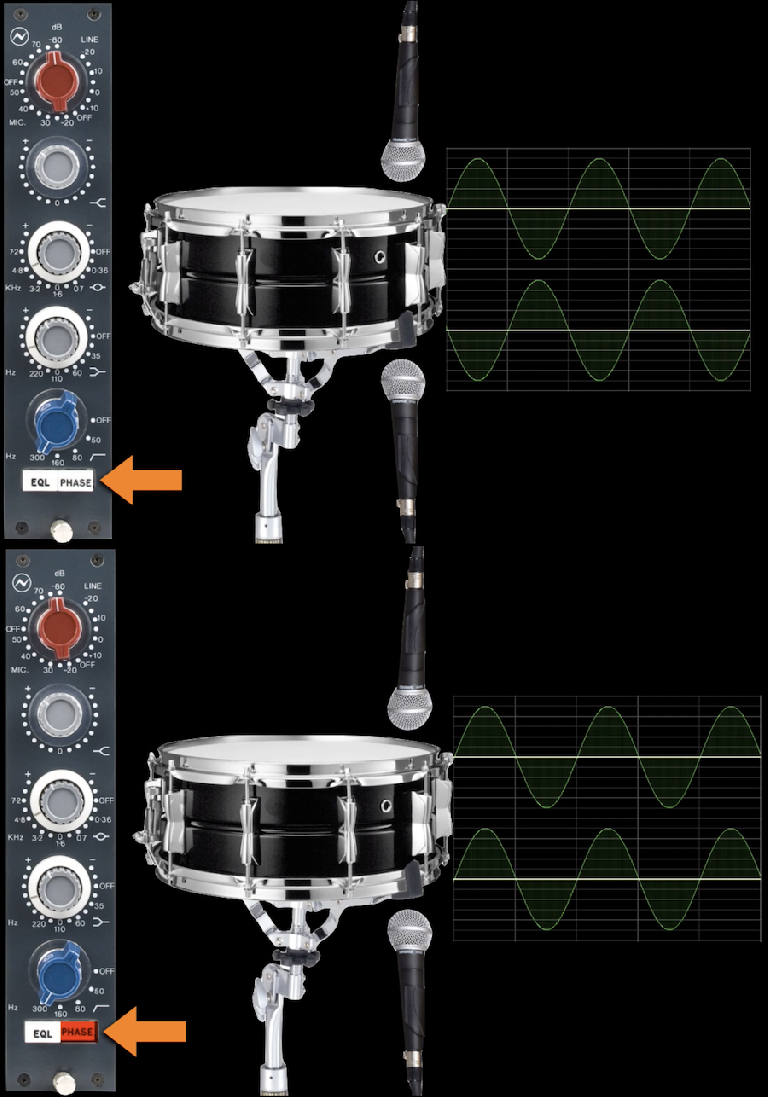 Here’a a quick mention of just a couple of additional issues that may come up, relating to cymbals..

Sometimes the close mic on the floor tom may end up below a low-mounted ride cymbal—this could possibly pick up a low-frequency sub-tone from that (large heavy) cymbal, so that mic should be soloed during setup while the drummer plays the ride to insure this is avoided.

Often there’s enough hihat in the overheads that a dedicated hihat mic is not really needed, but if one is used, make sure to look out for two things:1) Don’t aim it at the point where the cymbals come together—the blast of air from the cymbals closing must be avoided at all costs; 2) Watch out for the hihat mic picking up a nasty ring that might not be audible in the room—angle it (by ear) to avoid this if you notice it with the mic soloed.

Of course there’s much more that could be said about miking up drums, but that’s all I have room for here. Multi-miked drum recordings can sound great, as long as a little attention is paid to some of the key details.