Language
You might not think that recording and mixing the soothing sounds of Tibetan bowls will present much of challenge'¦ Lynda Arnold explains how to take the stress out of it in this insightful article. 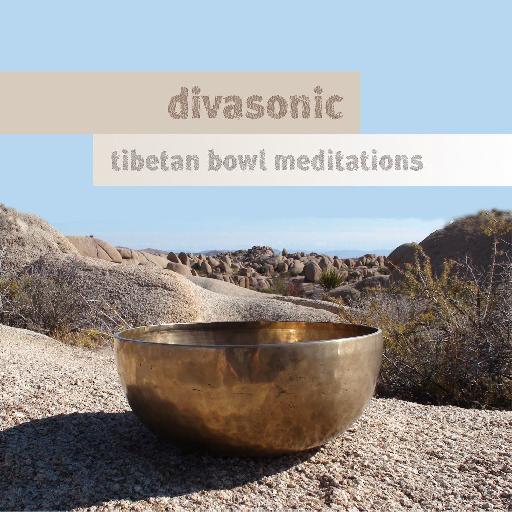 I went through an interesting, unique process while recording my latest album, Tibetan Bowl Meditations. Last year, I did an article on Tibetan Bowls and how I use them for sound healing and meditation sessions. My intention for this project was to provide a sound track for yoga classes, bodywork, massage and meditation sessions in addition to providing another way for people to listen to the bowls after a live session. After playing my bowls for a couple years, I felt ready to tackle a long play minimal album featuring them.

World music instruments are a passion of mine so I was truly excited to make this happen. I was able to use all my knowledge of the recording process from inspiration to finished product with the help of recording and mastering engineer Ryan Kleeman and recording engineer/musician Jay Marston. Tibetan Bowls are not instruments you find everyday in the studio. This allowed for maximum experimentation and a lively discussion on how to capture this sound.

I considered a couple environments for recording the bowls. After hearing Paul Horn's Taj Mahal CD, for which he recorded his flutes in the reverberant, famed site, I thought a church would be a lovely place to record the bowls. After doing a bit a research and conceptualizing what I wanted to do with the recording, I decided to use a well-treated, quiet studio in San Francisco where I could get the cleanest sound with the best equipment instead. Jay Marston's Ghost Cat Studio provided a fully carpeted live room, excellent lighting and vibe and the best recording equipment for the job.

Setting Up and Choosing Microphones 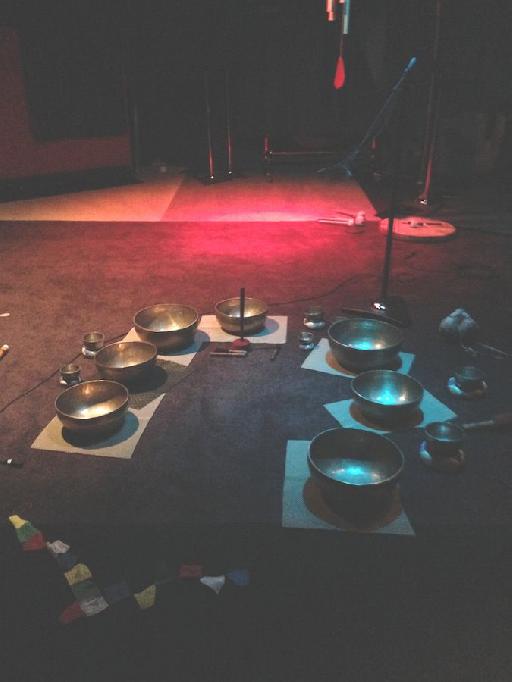 Engineer Ryan Kleeman brought in some great microphones and a wonderful concept for capturing the sound. At first, we discussed the idea of mounting Countryman EMW Omni Lav mics on a dummy head with the bowls placed around it, and then having me walk around to play the bowls. I thought the sound of me walking around would be too disruptive, even on carpet, and so we went with me sitting the middle of the bowls so I could reach and play them easily without too much movement. Ryan taped the Lav mics on either side of my head to capture the binaural effect from my perspective. A pair of Neumann K140's was placed in front of me in ORTF format (17 cm apart and 110 degree angle) to capture another perspective as well as another sonic color to mix in with the Lavs later. The microphones went into the Manley Dual Mono and Universal Audio 2-610 pre-amps and then into Pro Tools in the main control room. 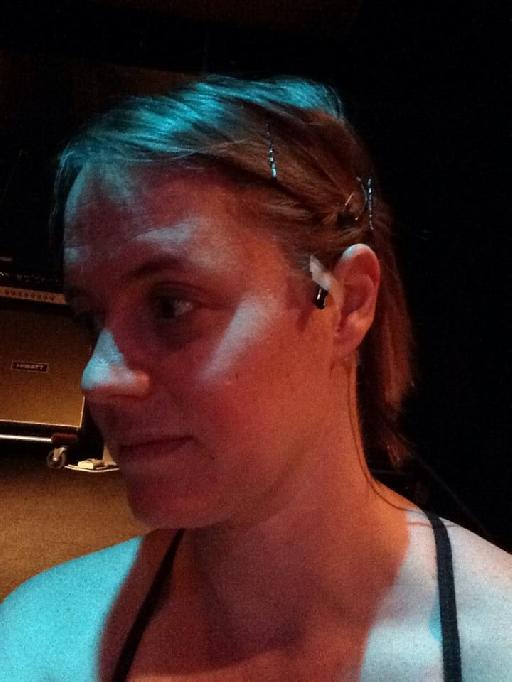 I recorded three 30'"40 minute long bowl performances during the weekend. We decided to record at 88.2 kHz and 24-bit to get a high-quality result with plenty of room for dynamic range. I realized this would leave us with massive files to work with, but I wanted to experiment with the higher resolution files all the way through the mastering process before downsampling.

There are a few reasons I recorded long performances. I wanted to have a lot of variation to choose from in the editing process. Also, I soon found out that it was impossible to stay absolutely quiet during the recording. Often, the sound of my swallows and some rustling from moving side to side was also captured. It was great to have long performances so I could edit out the undesirable parts without loosing too much.

It was fun to create an arc during the performances. I experimented with playing very spaced out tones, clusters of tones that swirled together creating wonderful overtones, and also moments of just the little, high-pitched bowls to contrast the low pitched bowls. It took a lot more endurance than I expected but it was satisfying nonetheless!

Back in my studio, I imported the sessions into ProTools 10.3.7 and got to work on listening to the various takes, creating a mix between the Lav and Neumann mics. The binaural effect captured by the Lavs was wonderful. It's like having instant panning, no automation needed. The Neumann mics seemed to even out the overall sound and add more warmth.  This makes sense because the Neumanns acted more like overheads and were further away from the source. The combination of the two worked really well.

Before summing the dry mics together to create one file for each performance, I had to import the takes Ryan bounced through the Eventide reverb plug-in. I like the way the wet tracks sounded by themselves, but ultimately I didn't want to lose the intimacy of the dry tracks so I mixed the reverb track under the originals. I had added some compression to the dry tracks to bring up the level a bit but left the wet tracks the way they were bounced. So, each performance had eight mono tracks that were summed into one stereo track for editing.

During the recording process, the pre-amps had to be cranked to get a decent level so there would be sufficient dynamic range during the attenuating part of the bowl tones. This caused an overall noise hiss on the tracks. I used Waves X-noise to reduce the static and tried not to do this too heavily as too much noise reduction would adversely affect the overtones of the recording. I wound up lightly using noise reduction again after mastering when the files where compressed again, revealing another layer of noise static. This was personal preference, as I wanted the recording to sound as clean as possible.

Once I had the three summed performances imported into a new session, I began the editing process. Most of the editing process consisted of taking out swallow and rustling noises. Also, both Ryan and I worked on attenuating the bowl attacks during the mixing and mastering process. The final mix compression revealed more strong attacks than I initially realized so it was great to have another set of ears on the mix. 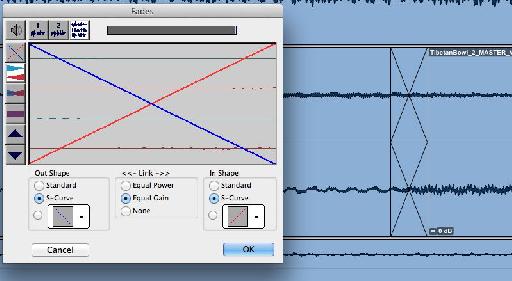 Editing the various noises from the recording took a while. I used the fade tool in Pro Tools extensively, trying various slope, power and gain crossfade settings to eliminate the swallows and other noises. Who knew swallowing would cause such disruption! Often, I would have to cut a small chunk during a bowl tone fading out so I needed the right crossfade to avoid the sonic hiccup. In some cases, a series of 3'"5 bowl hits had various noises going on so I edited the entire section from attack to attack for a clean edit. 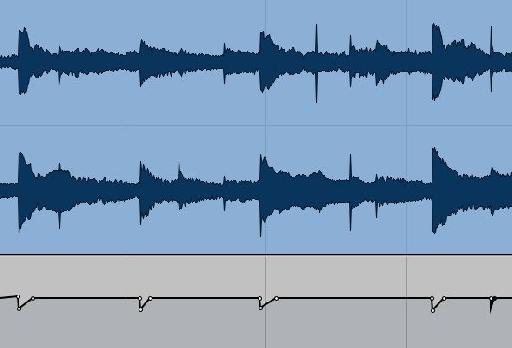 As I just mentioned, we did some volume automation on the bowl attacks during multiple phases of the mixing and mastering process. Adding compression to the mix really brought those out and many of them were too jarring to leave alone. However, I didn't want to compromise the original dynamic of the recording with too much automation. So, the goal was to try to even out the sound a bit on the loudest hits, so that listeners who are meditating, for example, would not be thrown off by the quick volume changes. 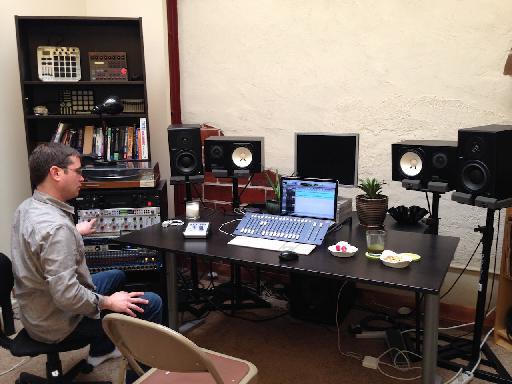 Another reason I worked with Ryan was for his mastering process. He ran the finished pre-master tracks through his Neve Master Buss Compressor. It's a 2-Channel Compressor with a gentle limiter and has a SFE section (Stereo Field Editor).  This section enables an engineer to increase depth in a track, by pulling out anything common between the left and right channels or decrease depth if needed.  It also has a width setting that can increase the horizontal width of the stereo image by pulling out content that is different between the left and the right channels.  The silk section enables an engineer to control harmonic drive. The red silk knob pulls out upper mid-range harmonics in the signal and the blue pulls out lower mid-range harmonics and tends to add more warmth. We used the red silk setting to pull out more of the upper-mids since we wanted to highlight the overtones of the bowls. It was fun to AB the settings with original and hear the differences in detail. 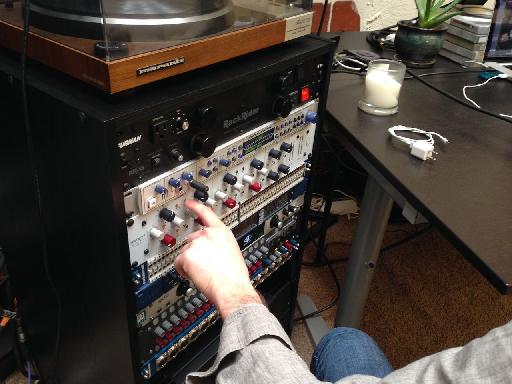 I wanted to release the album in 88.2 kHz/24-bitbut each file was over 1 GB! Bandcamp only allows a maximum of 600 GB per file so I down-sampled the files to 44.1 kHz/16-bit and uploaded them to the site for release. I may release the high-resolution files for those who are interested on my website in the future. I have also included a bonus version of one of the Tibetan Bowl performances layered with flute, chimes and tuning forks that I recorded the same weekend. This was truly one of my favorite recording projects to date. You can hear the finished result below and on my Bandcamp release page.