Language
Cubase some some very advanced was to manipulate MIDI. One of these lie in their MIDI modifiers. In this tutorial Gary Hiebner takes a closer look at MIDI Modifiers and how to make them work for you.

Cubase has a great set of tools for MIDI editing and manipulation. What I find particularly useful are the MIDI Modifiers commands. You might not have used or explored these yet, so let me take you through on where to use these and how they can be beneficial to your music productions.

Where To Find Them 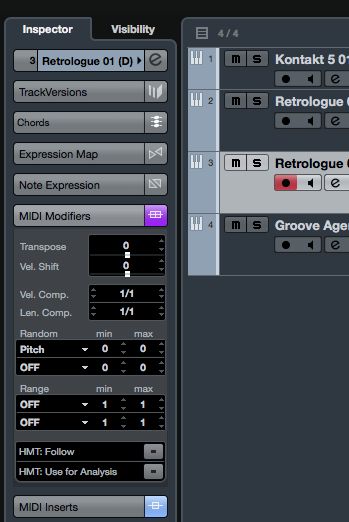 If not then right-click in this area and tick the MIDI Modifiers option. So this will be applied to any MIDI region you have selected. 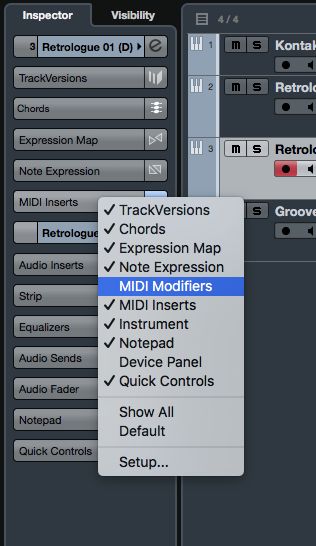 Or it can be applied as a plugin. I’ll explain how to do this later in the article.

Let’s take for example a drum part that has been programmed in using the Velocity Shifter. I’ve programmed in a drum part with Native Instruments’ Studio Drummer, which is a very velocity sensitive instrument. You’ll see that from my MIDI part the velocities are quite hard, but also varied. 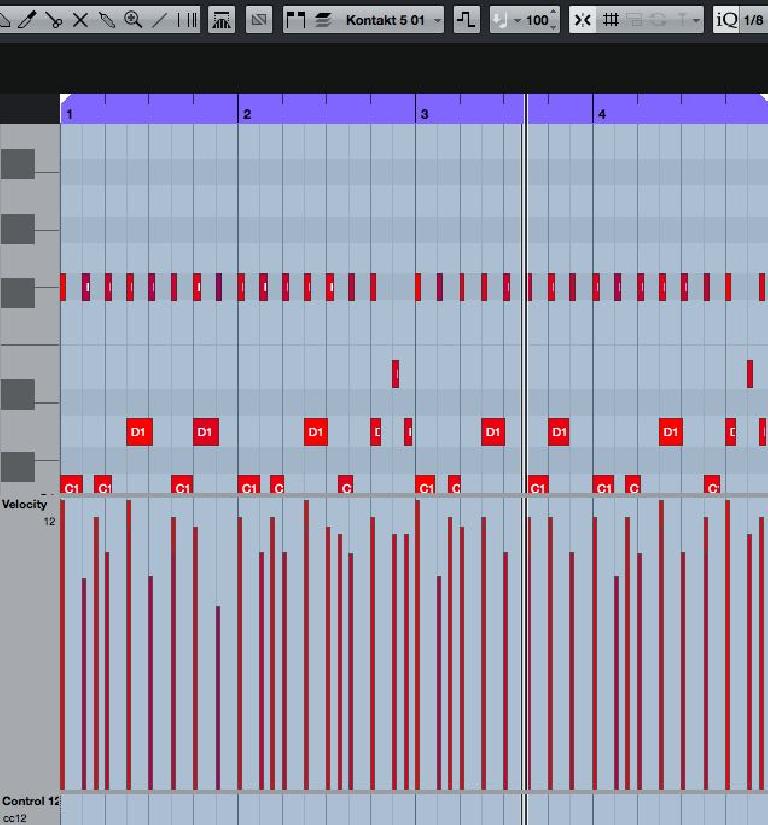 Now if I take the Vel.Shift dial and move it to the left, it shifts all my velocities down by an equal amount relative to each other. You’ll hear the difference in the instrument, but it won’t be reflected in your programmed MIDI part. Which is pretty cool, so it retains your original MIDI performance and applies the modification after this to the part. Now shift it to the right and hear how this increases the overall MIDI Velocities.

Creating Sequences With the Random Pitch

What’s also pretty cool is that you can use the Randomize pitch feature in the MIDI Modifiers to create a sequence. To do this, first program in a synth part with all the notes playing on the same pitch. Then select this region and move over to the Random section under the MIDI Modifiers. Here choose Pitch under the first column, and then you can set a min and max value.

I’m setting mine to -12 and +12 respectively. So now it will be randomizing the pitch between 2 octaves. 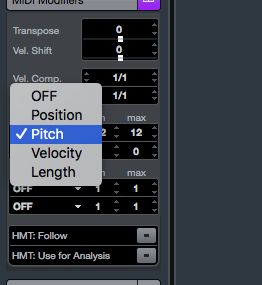 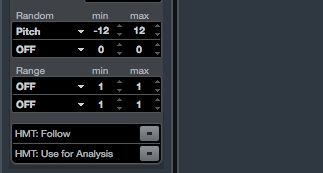 You could take this even a step further and randomize the length of notes to really change up your sequence pattern.

What you can also do is transpose your piece up or down. So let’s say I’ve created a sequence pattern with the random feature now I’d prefer to transpose it up 5 semitones. All I have to do is enter 5 here. 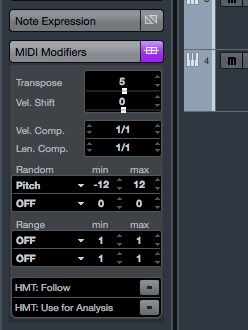 Under the Transpose and Velocity Shift parameters are the velocity and length compression. These settings are similar to your standard compression. So if you set the Vel. Comp to 1/4 it will be the quarter amount of the original Velocity settings.

Similarly with the Len. Comp. you can compress the length of your MIDI notes. So let’s say you have a MIDI region with long legato notes, you could dial in a setting of 1/8 on the Len. Comp. to shorten the note length. This is a great way to take legato notes and change them very quickly to staccato notes without having to edit the MIDI Region. 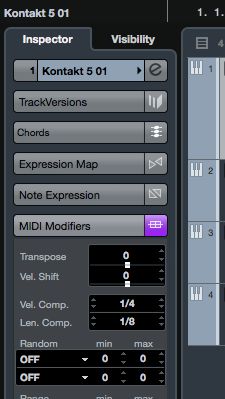 And the same way that you can randomize a parameter such as the velocities on the notes, you can also apply limits to the MIDI range, so let’s say I want to limit the velocity range on my drum part. I can select that region and then go down to the Range section and choose to Vel. Limit. So I have quite a dynamic drum part with velocities all over the place. I can choose this parameter and choose to limit my velocities between say 20 and 70. I can take quite a dynamic part and even out those velocities by limiting the range. 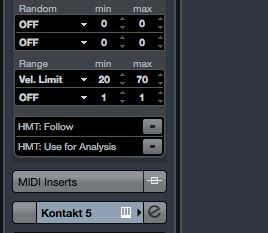 MIDI Modifier as a Plugin

The MIDI plugin version does include some different parameters like Delay, Scale, and Scale Note. So you might be more inclined to use the plugin if you need these parameters.

So maybe you want to use the plugin version to offset some of the notes played in by tweaking this delay parameter. Or you can even push the notes ahead of the beat by giving it a negative delay amount. 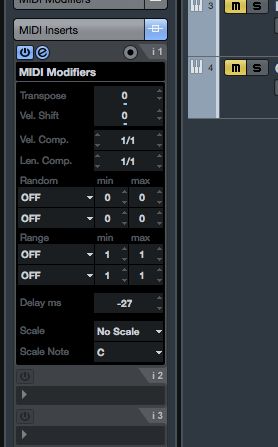 Or what’s even cooler is to use the Scale option. This will conform you MIDI to this scale or Mode. So you could program in a MIDI part and then later decided to use maybe Lydian mode, and it’ll remove any notes that aren’t in the Lydian mode. And you can even change the root note of the scale by setting it in the Scale Note section. 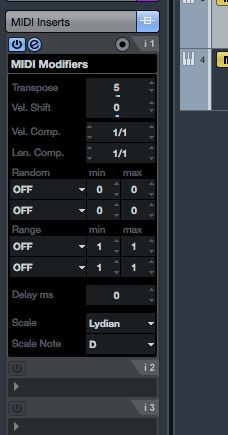 I quite prefer this over the transpose button as you can see the scale note. So instead of typing in 2 semitones to transpose from C up to D, you can simply choose D from the Scale Note. It’s as easy as that. And I like how you can play back your track and tweak these settings as you go. 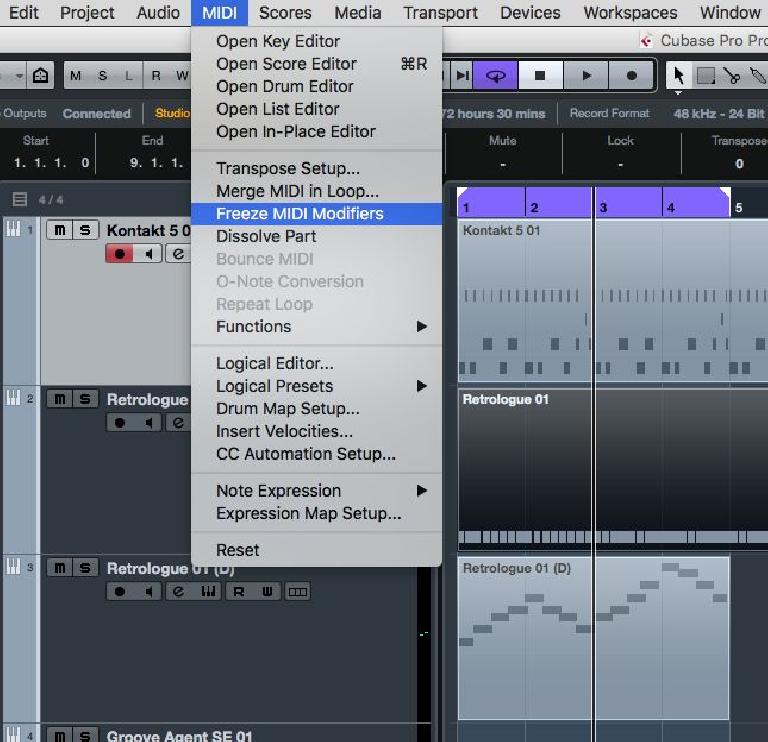 So that’s how to use the MIDI Modifiers to get more out of your MIDI performances. As I mentioned, it retains the original MIDI performances but passes the MIDI through the modifiers to alter how the MIDI plays back. Plus you have the choice of either using the MIDI Modifiers from the Tabs section, or added as a MIDI Insert effect where the tool has extra options. I think this has great benefits in how you can fine-tune your MIDI to function better in your music productions and how you can use these modifiers to come up with new MIDI ideas and sequence patterns. And when you’re happy with the MIDI modifications applied, you can print these parts to the MIDI by freezing them. So try these out in your next Cubase projects.

Learn all about Cubase in The AskAudio Academy here.