Operator is more than just a workhorse synth in Ableton Live - its additive synthesis capabilities elevate it to the next level. Noah Pred explains how to take advantage of it.

With the recent spotlight focused on Live’s latest Wavetable synthesizer, your average Ableton user may not realize Live Suite has shipped with an additive synthesizer for quite some time. Primarily known as a deceptively powerful Frequency Modulation, or FM, synthesizer, Operator comes with full-fledged yet lesser known additive synthesis capabilities for each of its four oscillators.

The Good Kind Of Additive

Rather than remove the frequencies of simple waveforms via filtration to control harmonic content, as is the case with subtractive synthesis, additive synthesis allows you to selectively build complex waveforms from the ground up by choosing the volume of individual harmonics above the fundamental, or triggered root note. These individual sine wave harmonics are referred to as partials. By merging different partials together, you can create otherworldly tones that would be prohibitively difficult with other types of synthesis.

To access Operator’s additive features, click the Oscillator tab for the selected Operator. By default, it will show a single partial at full volume at the far left of the window: the fundamental frequency triggered by incoming MIDI.

Clicking on any of the other vertical partial bars immediately activates them, and the Wave dropdown, which by default would have read Sine, now shows User, while the waveform display itself is modified and updated as new partials are drawn in. 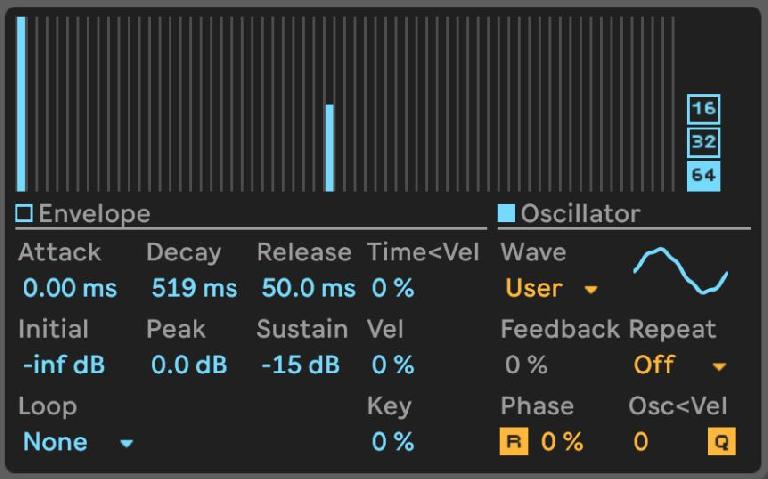 A default Sine wave in 64-partial editing mode with a single additional partial drawn in.

In order to simplify this process, we can click the 16 partials setting to reduce the number of available harmonics. This hides any upper partials previously added, reverting the User wave shape display to the simple sine wave generated by the single fundamental harmonic.

Not unlike a drawbar organ, you can click to slide different partial harmonics up and down to varying degrees to experiment with different tones – or hold and drag to draw different wave shapes across the partial spectrum. Higher harmonics can be quite bright, so you may want to exercise caution on the upper register – towards the right of the partials area. 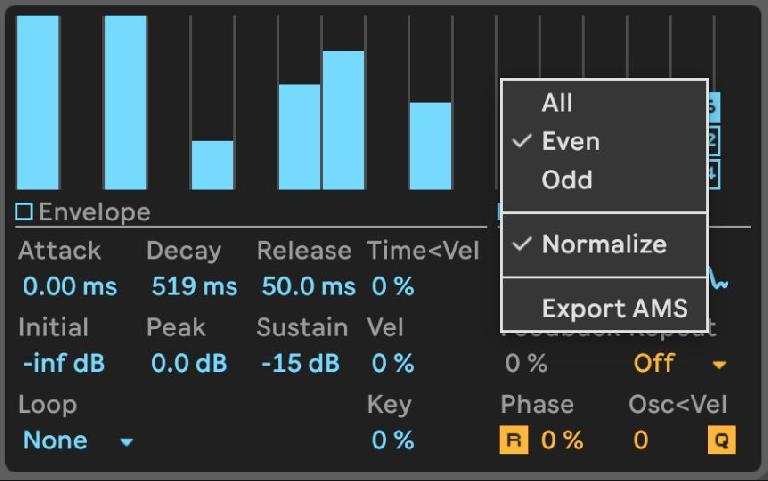 Editing in 16-partial mode and selecting Even harmonics only from the context menu.

Right-clicking on the partial display window allows further restriction of the available partials. Selecting either the Odd only or Even only options from the context menu gives control over the available harmonic relationships. Odd harmonics can be used to enforce more hollow, Square wave tones, while Even harmonics tend to provide more spectral variance. Switch to the 32 or 64 partial modes via the toggle at right to create increasingly complex waveforms with more high frequency content.

You can always reset to a simple Sine wave by selecting Sine from the Wave menu, and start drawing again from there to experiment and get a feel for the constructive technique of additive synthesis. You can also select any of the included waveforms from the Wave menu to see how it’s represented in terms of partials – and even use that as a starting point to make your own waveforms as you edit partials from there. 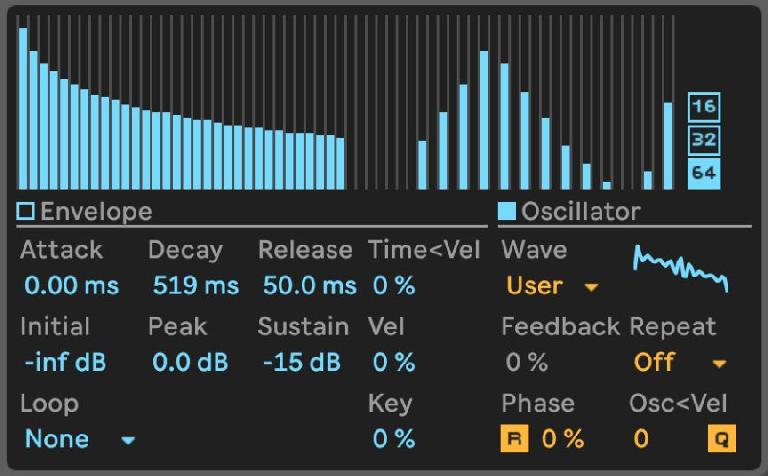 To roll off higher frequencies, you can use the Repeat menu to select a speed at which the highest harmonics are faded out, with resulting increased emphasis on the fundamental. Lower, fractional values allow more harmonics, while higher values reduce them.

You can also adjust your waveform by adjusting the Phase control – the User waveform display will shift left accordingly, displaying the newly imposed start point of the waveform. Better yet, custom User Waves can be saved via the right-click “Export AMS” function, storing them in the User Library for future deployment. 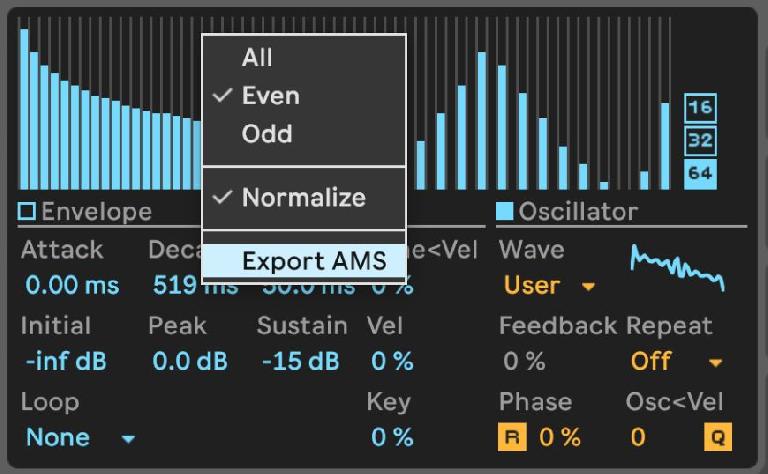 Saving a custom Waveform to the User Library via the context menu’s Export AMS command.

Using the 16 partial mode, I’ll add a bit of the 1st, 2nd, 4th, and 6th harmonics, adjusting to taste. A short attack and fairly high sustain with a short decay help deliver some pluck at the start of each note.

I’ll set the Repeat mode to 1, adding a touch of higher harmonics otherwise unavailable with the 16 partials mode. A low pass Filter with a short decay-only Envelope applied positively help emphasize the transient while allowing the thick lower frequencies to pass through unimpeded. The result is a fairly convincing bass that’s got more captivating frequency content than a solitary sine could reliably provide.

A thick bass tone with Repeat mode set to 1, a hint of Feedback for texture, and the Phase offset slightly for a punchier transient onset.

PRO-TIP: So long as you’ve chosen an Operator configuration in the Global settings tab that leaves the Oscillator you’re editing unmodulated by another Oscillator, you can use its Feedback control to modulate an Oscillator by its own frequency – Self-FM, if you will – to add texture, grit, and bite to a sound.

Drawing a series of partials in the upper register creates unusual tones, especially without the fundamental included – feel free to experiment with removing it entirely. Longer Attack and Release times, a high pass filter, and increased Spread amount make for a bell-like pad tone. Be sure to leave the Repeat mode off if you want to retain the full intensity of upper harmonics.

A glassy pad with plenty of upper harmonics, a high-pass filter, softer envelope times, and a healthy dose of Spread for good measure.

Combined with the extensive Frequency Modulation routing Operator is more typically known for along with standard Filter, LFO, Spread, Tone, and numerous other features, custom synthesis via additive partials make Operator an even more powerful sound design tool than many may realize.

While Wavetable has understandably stolen the spotlight as Live’s latest flagship synthesizer, Operator remains highly useful. Experiment with additive harmonics to gradually construct an arsenal of custom AMS waveforms, and you’ll soon be working with highly unique sounds all your own.