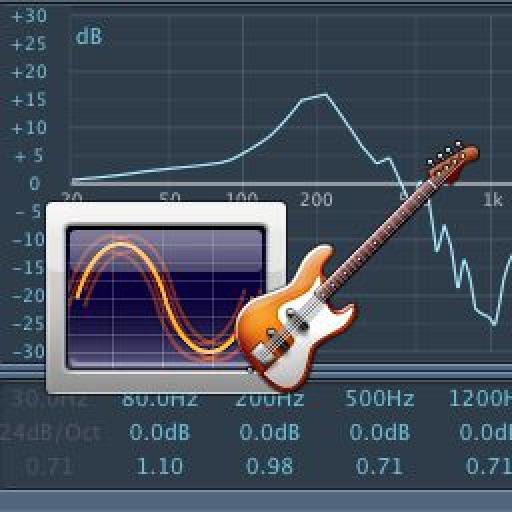 Language
In Part 2 of this Extra Bass series Mike Watkinson demonstrates how to use a simple sine wave generated by the EXS24 to add sub-harmonic content in a controllable way.

In 'Add Bottom End to your Bass in Logic Pro - Part 1' we discussed the use of Logic Pro's SubBass plug-in for beefing up the bottom end of a poorly recorded bass part. The challenge with the SubBass plug-in is that its output changes relative to the pitch of the input, so it would be more useful to create a separate part that doubles the offending bass part at one octave below its pitch, so that its level, frequency content and impact can be more carefully controlled.

Since we are talking about an audio recording, what is required is to convert that into MIDI, in order that an appropriate instrument can be used to add simple sub-harmonic content to the audio without destroying the clarity of the mix.

Create a software instrument track adjacent to the audio bass track and assign an appropriate EXS24 instrument preset from the Library, such as 'Fingerstyle Electric Bass'. You will change this later.

Double-click the audio region to open the Sample Editor, then choose 'Audio to Score...' from the Factory local menu. In the Audio to Score window choose a preset. There are no bass presets so something like 'Guitar Picked' will do for a cleanly picked bass part. Ensure that the software instrument track you created in Step 1 is selected (this is the destination track of the MIDI are about to create). Click the 'Process' button in the Audio to Score window. 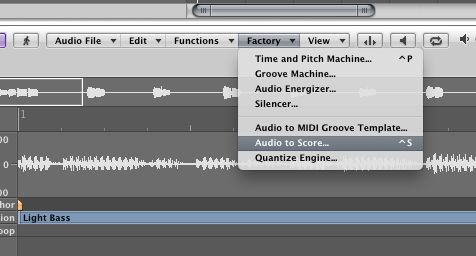 Choosing 'Audio to Score...'  from the Factory menu. 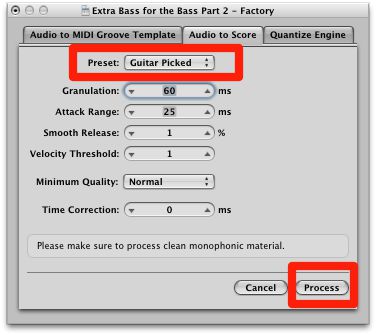 Logic has a go at analysing the pitch and rhythm of the audio with mixed results so here follows a slightly tedious part. Check through the MIDI notes by using either the Piano Roll or Score Editor, and adjust the pitches of the notes so that they are correct, by listening to them alongside the audio. Logic seems to miss by several octaves sometimes! Also delete any glitch notes or mistakes that you can't correct. You should be constantly checking against the audio bass part to make sure that the new MIDI part only augments what is already there, so no new rhythms or pitches are required. In fact, if the MIDI part is slightly simpler than the audio then so much the better! You will notice that an attempt to translate audio volume into MIDI velocity has taken place and that the rhythm is usually very accurate.

The result of Audio to Score in the Score Editor. 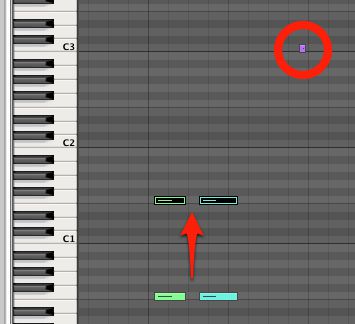 Moving notes up one octave and deleting a 'glitch'.

Remove the instrument from the EXS24 so that it plays a sine wave. You should also check that it is actually playing one octave below the original bass part. If not, use EXS24's Transpose parameter to change this.

You may find that the ends of notes in the MIDI part are causing clicks, in which case go to the ADSR section for Envelope 2 in the EXS24 and increase the release time until this is eradicated. You may also wish to add a little attack time so that the attack phase of the combined note and sine wave is clearly created only by the original recording. 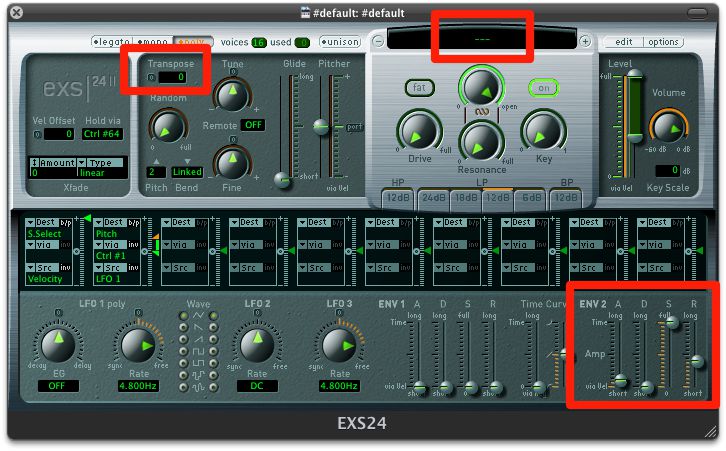 EXS24 with 'No Instrument', the Transpose field and ENV 2's ADSR.

Interested to learn more about mixing in Logic? Check out the Logic 403 - Mixing R&B and Logic 404 - Mixing Electronica to learn a whole lot more.