Language
Evolving your sounds in Ableton Live is about to get easier and more fun thanks to Sonic Faction's Hypermorph Max for Live device. It's like a unique synth, sequencer hybrid instrument.

Yesterday Ableton informed us they were planning a rather special announcement for Hypermorph M4L device from Sonic Faction.  After seeing and hearing it in action we understand why Ableton Live users will probably be prety excited. This is a rather tasty MaxforLive device that, in a nutshell, allows you to mix, morph and mutate between four different sound sources using its matrix. It works great with Push too with a modulation sequencer.

"It’s this Max for Live instrument’s playful, intuitive controls that open up such a wealth of possibilities for sound design. Transform or glide between four independent sound sources using the XY Morph Matrix, or use the creative Morph Sequencer to blend, mutate and layer different synth tones and timbres.

"The sound sources come from an array of modern analog and digital synthesizers, and are made up of a mix of beefy oscillators, wavetables, FM textures and custom one-shots. Combine this tonal flexibility with its built-in Morph Sequencer: you’ll be blending elements together in unusual ways, and heading into unfamiliar sonic territory. 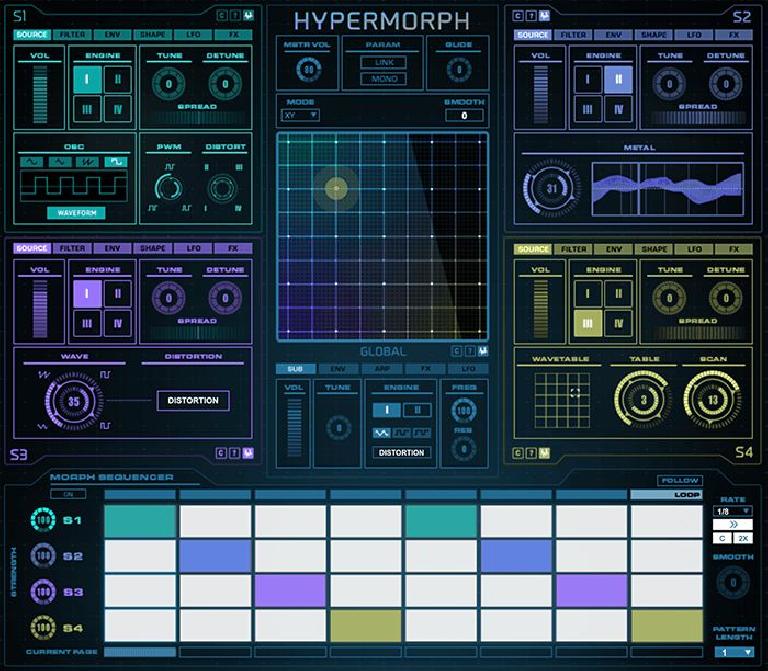 Some of the most interesting and distinctive sounds in electronic music are created by recording multiple takes on the same theme – having different instruments play the same melody for example – and then weaving them back together to create a completely new sound or timbre.

This technique becomes a lot simpler with Hypermorph. Its built-in Morph Sequencer can automate the entire process, letting you to play notes and tweak controls while the instrument switches between four distinct sound sources.

At the core of the instrument is the XY Morph Matrix which can be moved manually to find the perfect balance of tones. Or use it to morph your sound automatically, using the following modes:

Push users can take hands-on control of Hypermorph’s Morph Matrix for tactile and playful experimentation. Play ping pong with your sound by bouncing the Morph Node around in Gravity mode, or access Hypermorph’s built-in Sequencer directly from Push to automate the Morph Matrix in realtime.

Parameters are grouped and easily accessible via Push’s encoders, plus you can map macros to multiple controls for even more sonic mayhem. Hypermorph’s control functions also work on Novation’s Launchpad series and other grid-based controllers.