Language
If you've never used Ableton Live's Follow Actions before then be prepared to have your mind blown with these 6 ways to use them by Ableton Certified Trainer, Noah Pred.

Did you know you can program instructions into Live's Session view clips that will tell those clips to play for a specified period of time before playing another carefully specified clip—or a randomly selected one? In this tutorial, we'll explore six exciting usages of Live's under-utilized but highly powerful follow actions for use in both performance and production.

First thing you need to know is that follow actions can only be programmed to control a group of clips on a single track. What do I mean by a group of clips? A group of clips are vertically contiguous—in other words, direct neighbors above and below one another, not separated by an empty clip slot. In the picture below, we have two groups of clips on a single audio track: the purple clips are in one group; below, separated by an empty clip slot, the blue clips constitute a separate clip group. Before going further, it's worth mentioning that follow actions behave identically for MIDI clips as they do for audio clips. 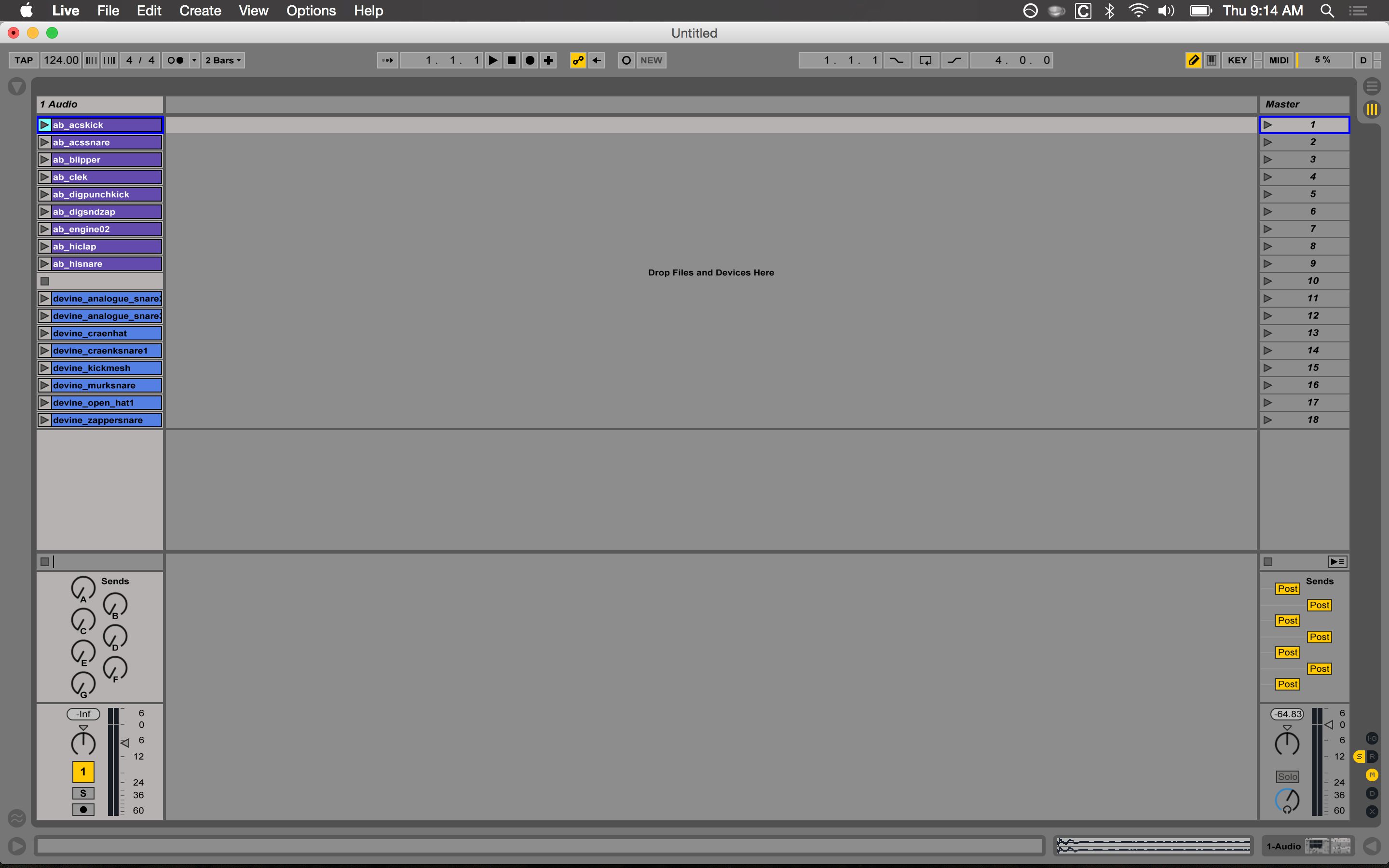 Now that we've got these clips organized into groups, we can set about configuring our follow actions. It's important to set these up before any clips in the group have been triggered, or the follow actions may not take hold as expected. In theory, you could set follow actions up on the fly so long as you haven't triggered any of the clips in question yet, but as you'll see, it's advisable to set them up in advance.

A clip's follow action properties are located in the launch panel of a clip's settings: in a clip's detail view, click the “L” button in the lower left corner so that it lights up. You should now see a Launch properties pane, the bottom third of which is devoted to follow action settings.

The Launch properties pane of a one-shot clip, without follow actions configured.

At the top of the follow action settings are three boxes that allow you to specify how long the clip, looping or not, will play—in bars, beats, and sixteenth notes, respectively—before assuming the specified follow action. 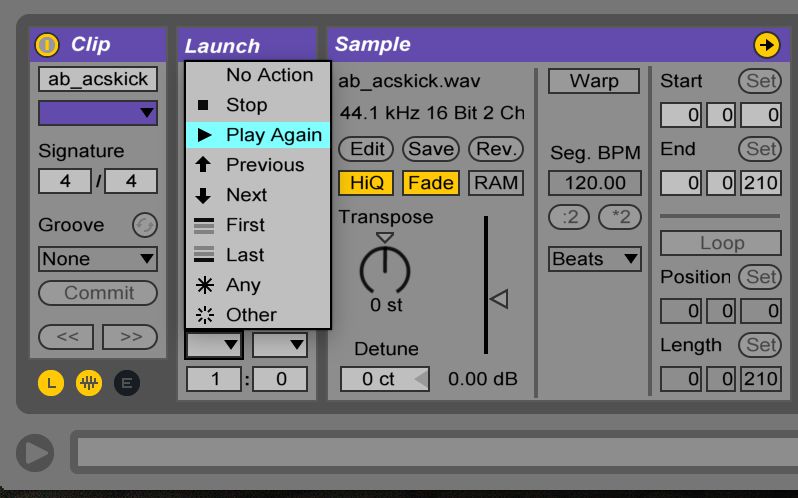 This already opens up a world of possibilities to program intricate sequences, randomize playback, or create a balance of the two by injecting randomized fills into steady patterns. But why are there two identical follow action menus side by side?

Beneath each of these menus is a numerical field that determines a probability that the follow action selected above it will be taken—so rather than leave selections to be completely randomized, you can create your own weighted gambles between two specific options.

For this first example, I've simply taken four drum clips and told them each to play the next clip in the group after two bars. When the bottom clip of a group is playing, the next clip instruction triggers the top clip of the group again, which means that each clip in this group will play for two bars, completing an eight bar cycle before starting over.

Naturally, each clip could be told to play for any length of time and you could include more clips in this way as needed.

To create probabilistic drum fills, I'll have the top clip in a group of three clips play for 3 bars and 3 quarter notes. Below this are two fill clips, each a single quarter note in length which have both been programmed to play for one quarter note before playing the top clip in the group again. The top clip will play either the next fill clip immediate below it, or the second fill clip at the bottom of the group, but I'd like it to play the first fill clip more often than the second, so I'll weight the ratio accordingly.

To create fully randomized fills less often from a wider selection of clips, I'll take a main drum loop and ten half-bar fills. The top clip will be set to play for 7 bars and 2 quarter notes before playing any other clip in the group. Meanwhile, I'll select all the fill clips simultaneously—being careful not to select the main drum clip up top—and set them all to play for 2 quarter notes before the first clip in the group, setting playback to the top clip again.

Settings for the main clip at the top of the group.

Settings for the randomized fill clips.

For this next example, I'll take a set of five breakbeat loops and have each of them to play for either 2, 3, 4, or 5 quarter notes before playing any other random clip in the group. The important thing here—aside from them all being warped properly, of course—is to have the Legato box below the Launch Mode drop-down menu enabled. This makes it so that each breakbeat, once triggered, picks up playback at the current playback interval rather than starting on the first downbeat as it would by default. The result in this case is that while each drum clip is being triggered for playback at odd intervals, they'll all stay locked in rhythm with the main clock, resulting in beats being juggled at odd intervals while maintaining their core rhythmicity.

Legato switched on for a beat clip that will play for five quarter notes before playing another clip in the group.

While Ableton's warping algorithms are better than ever and in many cases sound pristine, some people prefer to not warp their audio clips at all. If you want to have a clip play back at a repetitive interval, such as sixteenth, eight, or quarter notes – or even three sixteen or eight notes for a hemiola feel – you can easily configure this using follow actions. For a basic example I'll take a bass drum sample and turn the warping off so there's no time-stretching whatsoever. Then I'll use the follow actions to tell it to play itself every quarter note, resulting in a pulsing 4/4 kick without any looping enabled.

You can also use follow actions to randomly generate new loops from one shots or longer clips. Simply select all the clips in your group and tell them to play a random clip from the group—including or excluding itself, as either work can work in this set up depending what you're going for—at whatever interval you need. To create rhythmic patterns out of drum or other short one shots, you'll want to select one, two or three sixteenth notes; to trigger, say, dubby effect shots, you might only want them to happen every four, eight, or sixteen bars—or even further apart, or at less standard intervals. 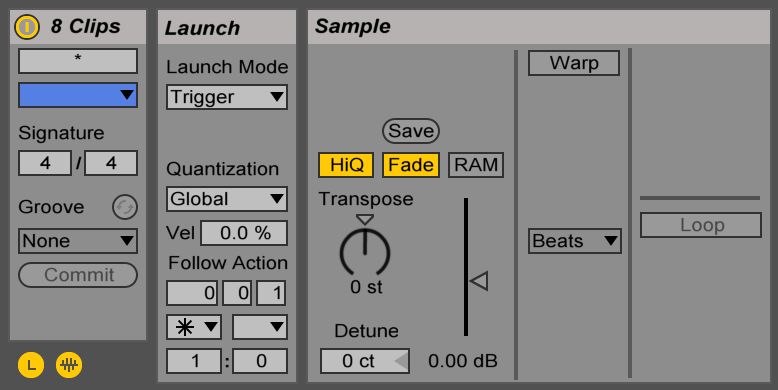 Eight one-shot clips configured for randomized rhythmic playback with a chance of retriggering.

Follow actions will be recorded into the arrangement as discrete clips, triggered as programmed. Whether generating unique patterns in the studio or injecting some randomization into otherwise repetitive loops to spice things up on stage, follow actions are a powerful feature built into Live's clips that every Live user should know how to use.

Learn more about Ableton Live in these courses at AskVideo:
https://www.askvideo.com/courses/application/Ableton