Montreal, Quebec—March 24, 2015—It's with excitement that Applied Acoustics Systems announces the release of Strum GS‐2, an all-new version of its award-wining guitar track production plug-in.

Strum GS‐2 reproduces the sound of acoustic guitars and also the playing techniques of a guitar player—making the production of guitar tracks in a DAW environment a straightforward endeavour. Strum GS‐2 embeds an elaborate chord recognition and voicing module which automatically voices chords played on the keyboard as a guitar player would on the fretboard. Strumming and picking swings into action with an auto-strum function and special strumming keys. Elaborate rhythm figures available from a large collection of MIDI loops are on hand to supplement chord progressions.

Strum GS‐2 is a complete redesign of its predecessor. In addition to the synthesis and strumming engines which have been completely reviewed, Strum GS‐2 ships with a new streamlined interface, a new equalizer and compressor module, a new multi-effect processor, brings native 64-bit operation on Mac OS X and Windows, and much more. Strum GS‐2 also features an all-new factory library comprising an impressive number of nylon and steel acoustic guitars of various sizes, both in natural and production-ready configurations. 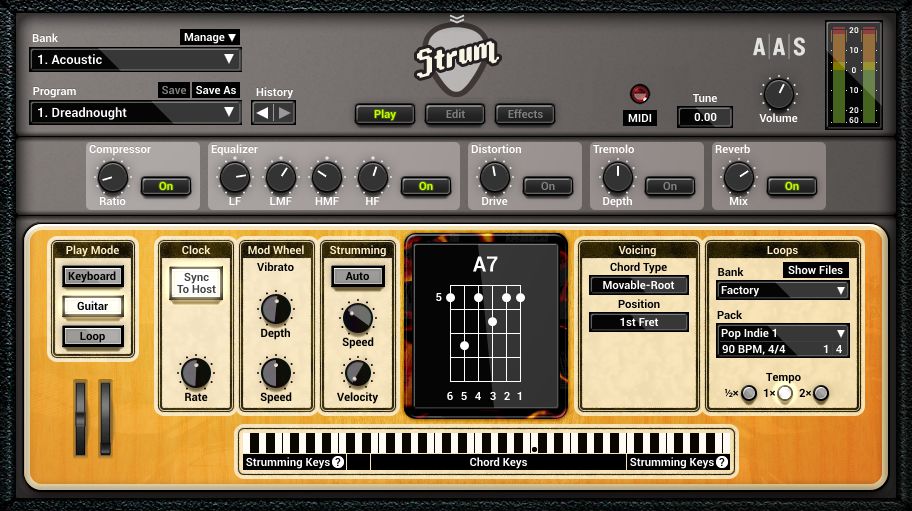 “We have completely reviewed the modeling behind Strum—from the string to the body—and reconsidered how the different elements interact with each other; we have also re-examined how strumming is performed, now giving us a whole new level of realism, tone control, and expressivity,” said Marc-Pierre Verge, CEO of AAS. “With its extensive collection of guitars and the ability to tweak them as required, Strum GS‐2 is an even more clever solution than ever for creating great- sounding acoustic guitar tracks. Playing guitar on a keyboard has never been easier!”