Bass lines in pop music can range from very simple roots that follow the kick, to more elaborate melodic bass parts like many of Paul McCartney’s memorable tracks.

Though it’s easy enough to record a real electric bass part via a DI and then pump it up with virtual amps and compressors, a lot of bass tracks are created with virtual synths or sampling instruments. If a musician or producer is crafting a virtual bass part that’s meant to sound like a real bass, there are a number of techniques that can be employed to make the virtual performance—whether played in realtime or programmed in—sound more like a part that a dedicated bass player might have laid down on his instrument. Here are a few suggestions for creating basslines that sound like a “real” bass player.

Phrasing is a key aspect of any bass part—not just to make it sound like what a bass player would likely play, but to make the part more musical in general. Often a producer playing a bass part on the keyboard or programming one in will tend to clearly articulate each note—keyboards lend themselves to this, since striking a key is the only way to trigger a note.

But a bass player will employ different methods of articulating notes: assuming standard playing technique (as opposed to a slap bass performance), some notes will be plucked, either with fingers or a pick, but the player may also utilize hammer-ons and pull-offs, and short slides, both of which will result in notes with a different, softer attack characteristic than regular plucked notes. This is one of the ways a player can group notes into phrases, and alternate strongly-accented notes—like maybe the notes of the current chord—with softer-played imbetween notes—passing tones—that can add extra movement to the bassline without clashing with the chords in other parts. 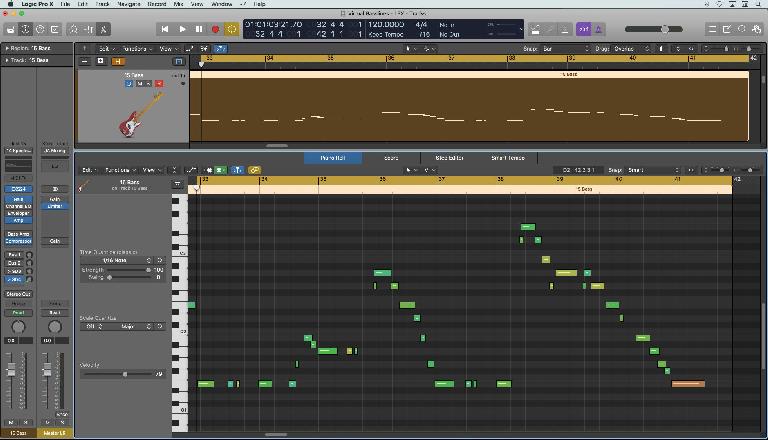 Another important aspect of performance is note duration. Again, sometimes a “keyboard bassist” will tend to play a series of bass notes that all run one into the next, or a series of short notes that all have the same duration. But a more experienced bass player will tend to vary note length to emphasize some notes in a phrase, again often emphasizing more harmonically-important notes over passing tones, adding musical clarity to the bass part.

Some examples of typical bass-player techniques might include a moving (“walking”) bass part with accented notes on the beats or the the root notes of the current chord, and slightly softer passing tones, adding some musical “push” or motion to the tune without overly accentuating the bassline. Occasionally a bass player may perform a short slide, like a semitone or whole tone—sort of the equivalent of a guitarist bending a note (jazz guitarists do this as well, in place of note-bending).

Some bass players utilize short, dampened notes as grace notes, to add a little rhythm without overplaying the bass part. These might be the equivalent of, say, a kick drum part with a couple of softer grace notes here and there, though the bass doesn’t have to follow the kick in this regard—a bass part could add its own subtle rhythmic variations this way to a more steady kick rhythm.

To take advantage of some of these bass techniques, the virtual bass instrument in use must respond to a variety of different articulations. High-end sampled bass sounds will usually have all these performance techniques (and more) programmed into the patch, often accessed via controllers and keyswitching, but more basic bass instruments (like built-in instruments) can often benefit from a little tweaking to ensure a more musical response. 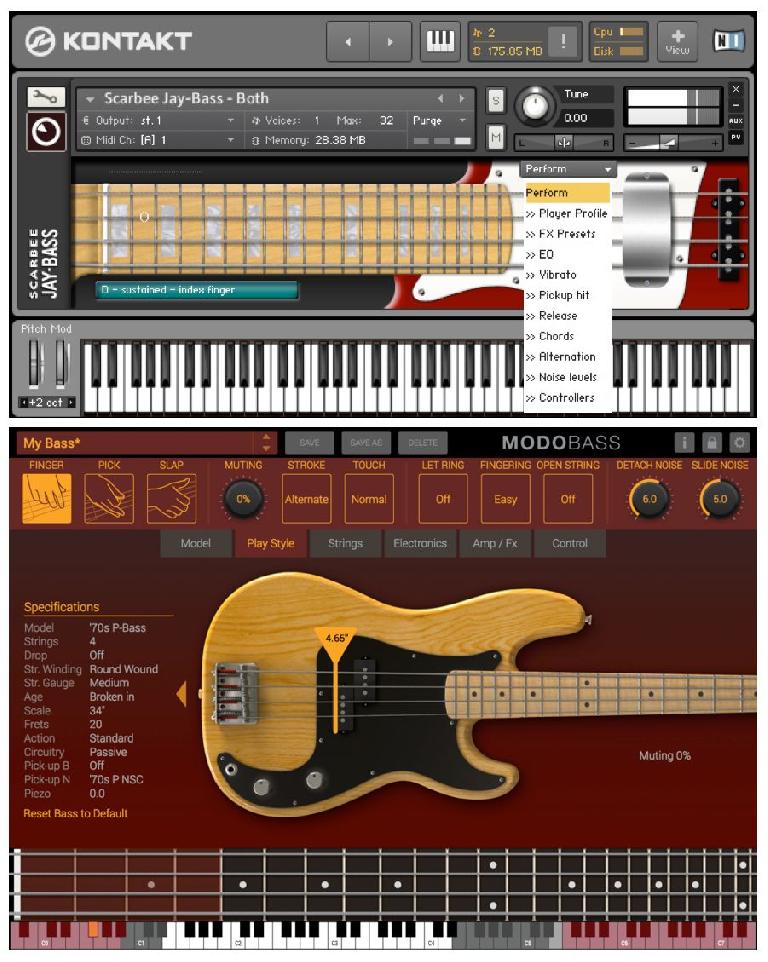 A couple of high-end bass Instruments with sophisticated articulation options

For example, to ensure that a bass sound will respond appropriately to notes of different durations, the Decay time of the bass notes must be long enough to allow for longer held notes, while the key-up Release time is short enough to allow for suitably short notes when the player employs a more staccato touch. Some more advanced instruments may offer a different set of short damped-note samples that more closely emulate the tonal variation that occurs on a real bass when this technique is used, and this (and other) alternate sample set(s) may be accessed via the lowest keys on an 88-note keyboard or some other controller-based articulation-switching method.

Most “real” bass lines are monophonic, with only one note sounding at a time. Setting a bass patch to be monophonic can help avoid accidental overlapping notes that couldn’t happen on a real instrument—like overlapping adjacent notes in a chromatic run that would lie on the same string. But a simple monophonic patch might produce a too-strong attack for inbetween passing notes, even if they’re played more softly. This can produce a different musical result than a bassline where some of the notes are hammer-ons or pull-offs, where the pitch may change without a new attack for those notes.

To emulate bass lines where some notes are not re-articulated (re-attacked), Legato mode can be enabled in the patch. When this is on, detached notes—where one note ends (key up) before the next note is played—will each have a new attack, but if the player plays a new note before lifting his finger off the current note, the pitch will change to that of the new note without a new attack. That’s legato—strings of notes can be played this way, with strongly-attacked notes interspersed with legato notes, creating musical phrases, for more memorable basslines. Of course, on a real bass when the player chooses to re-attack notes is not only a function of phrasing but also a function of when the player has to switch strings, and some of the most advanced bass instruments even employ algorithms to emulate this more realistically. 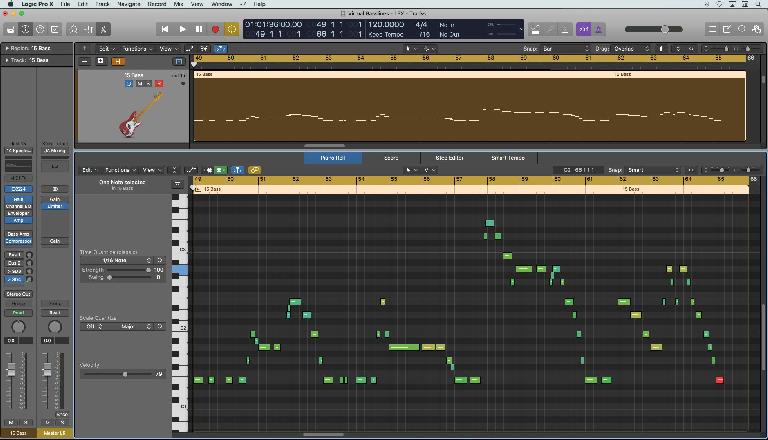 Audio example 2 - A bassline with some legato (overlapping) notes

At times a song does call for a steady pulsing bass part where the notes all ring out one into the next. This happens naturally on a real instrument if a bass player holds a note and plays, say, a series of repeating eighth-notes. But with a virtual bass sound, to play a repeating note on a keyboard you’d have to lift the key between each note, creating a gap between notes—a different musical performance altogether. To play a bassline made up of repeated full-attack notes that still each sustain up until the next attack, some bass patches might have to be tweaked to allow this.

Sometimes a Release time set short to allow for grace notes may have to be lengthened to let repeated notes ring out long enough on key-up to provide the desired effect. Ideally, holding down the Sustain pedal should accomplish this regardless of the Release settings, but if Legato mode is enabled sometimes this can produce unexpected results, For example, with older versions of Logic’s EXS sampler, Legato mode had to be temporarily disabled to be able to play this kind of pulsing one-note part using the Sustain pedal, but the current version works properly with the Sustain pedal held down even with monophonic/legato mode on. 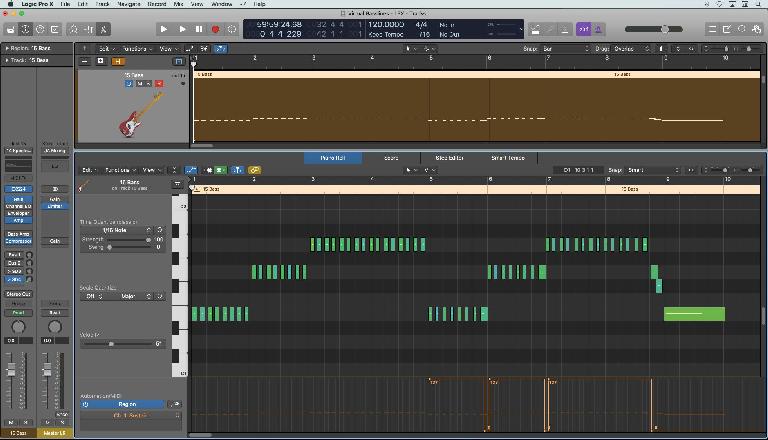 One playing technique that’s hard to emulate with keyboard bass parts is longer slides. Many of the more elaborate bass instruments simply utilize one-note samples of slides—you hold down one of several slide keys and hear a completely natural-sounding sampled slide performed on a real bass. The downside, of course, is that you can’t always control the length or timing of the slide, or the start and end pitch, making it harder to integrate these samples into a specific part. Very short fretted slides—like a semitone or whole-tone (1 or 2-note) slide can be faked by utilizing legato mode and a soft touch of the second note, but the other typical method for performing slides—the PitchBend wheel—is a little more finicky.

A typical performance technique for a longer slide on a real bass is to slide slowly from one note to another, re-attacking the destination note when you get to it. To play a slide from one held bass note to another with the Pitchbend wheel, you have to hold the first note, move the wheel, and then—with perfect timing—let the wheel go, so it snaps back to zero just before you play the destination note, but without a noticeable gap.

Audio example 4 - A bass “slide” performed with the PitchBend wheel

This can sound fairly natural if timed just right—especially if it’s not soloed—but it’s hard to “slide” this way for more than a few semitones without the PitchBend sounding artificial. And of course it’s going to sound like a fretless slide—a fretted slide would jump from pitch to pitch rather than sliding continuously, and there’d be a little fret noise as each pitch changes. This could be simulated with some advanced programming, but setting something like that up may well be more trouble than it’s worth—finessing a pre-played slide sample may be the easiest way to go in that case.

The bass is actually a very dynamic instrument—you get significant variations in attack and tone from louder and softer-played notes. A good bass patch will incorporate this, either via Velocity layers or Velocity-controlled volume, Attack time and Filter cutoff. But in the mix, the bass may need to be very even in volume. Even if that’s the case, you’d still want there to be noticeable variations in Attack and Tone—it would only be level variations that you might want to even out. So this shouldn’t be addressed by reducing the Velocity range of the MIDI notes or the Velocity response of the Instrument patch—instead this would be a job for a compressor or limiter. 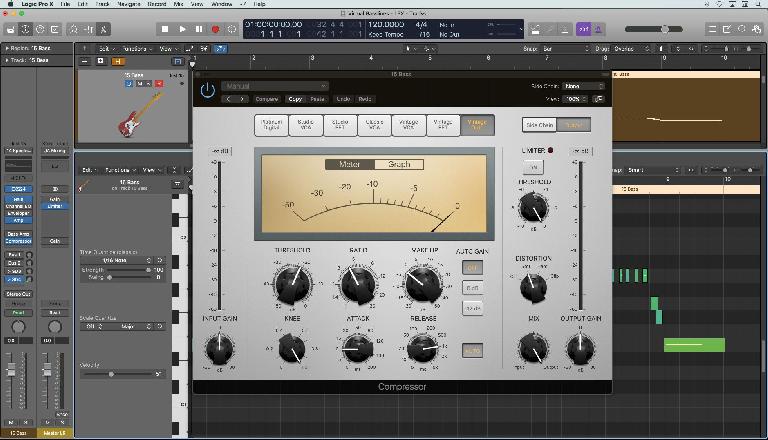 The compressor can be set to control level variations, but dynamic variations in attack and tone will still be preserved, making for a more dynamic-sounding musical performance while still enjoying well-controlled level swings and a consistently well-balanced bass track.

It’s easy enough to create simple virtual basslines, but a little more attention to the subtleties of those performances can make for much more fluid, musical parts—as with most aspects of music, the devil is in the details.