A Producer's Guide To Parallel Processing

Parallel processing is a key routing and mixing technique that every producer needs to know about. Joe Albano breaks down exactly how it works, and why it's important.

Parallel processing refers to the technique of processing a copy of a track in a mix and then combining it with the original. It’s a commonplace technique, widely used by experienced mixers, but many less-experienced engineers are not familiar with it, and novice engineers who are just starting out often struggle with the signal routing involved.

Some plug-ins/processors include a simple control for parallel processing, though it’s usually not labelled that way. But for many applications, routing must be done in the DAW between various Tracks and an Aux channel—while this is easy for old hands to set up, the routing involved seems to be one of the more difficult concepts to grasp for those just starting out. So let’s take a look at some of the uses for parallel processing, starting with the routing for what’s probably the most common application—reverb in a Send & Return hookup.

Some mix processes, like EQ or Gating, are always in-line effects—a plug-in is inserted into the channel strip, the audio is run through the processor, and the processed version is then fed into the next step in the signal chain—there’s only one signal after the processing is applied. 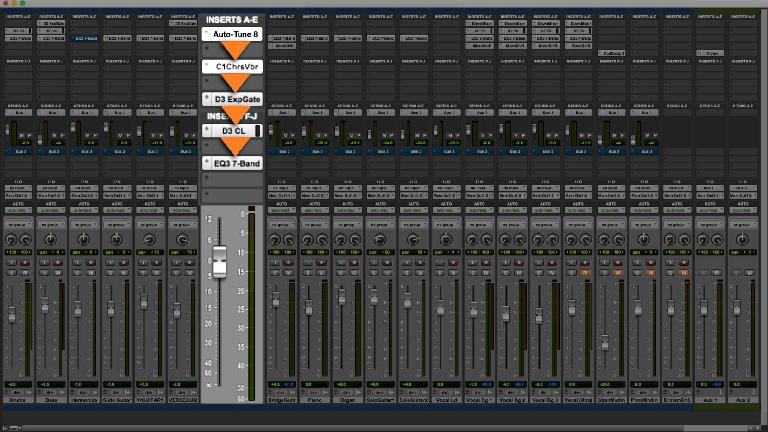 But parallel processing means there’ll be two signals—more correctly, there’ll be two versions of the same signal—the original signal, which remains unprocessed (dry), and a copy, which is processed (wet).  The dry signal is usually the main signal, and the effect is applied by blending the copy in with it to an appropriate degree—in parallel—for a desired mix of the dry, unprocessed audio and the effected, processed audio. 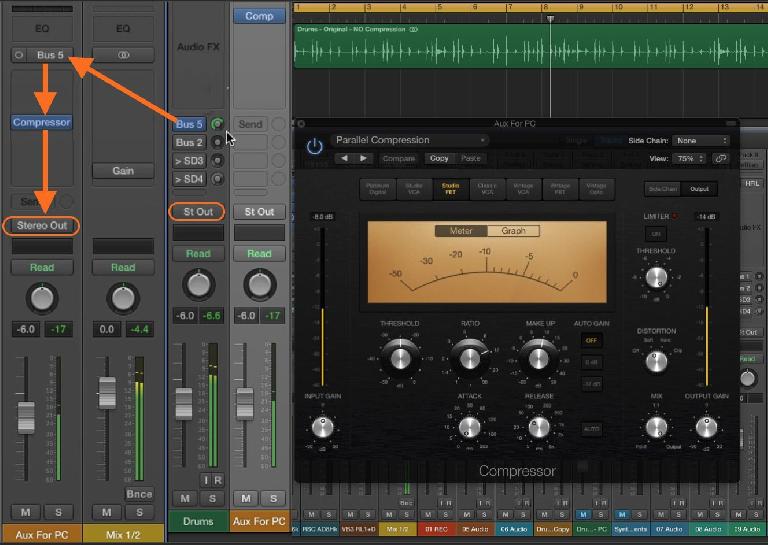 A processor inserted into a separate channel strip, applied to a copy of the original signal

Adding reverb to a mix is by far the most common use for parallel processing, even if it’s not always described with that term. While it’s certainly possible, and common, to have different types of reverb on different tracks in a mix (like a dedicated drum reverb, or a plate-type verb for vocal and a room for other instruments), typically many instruments have the same reverb applied. This is natural—in a concert/live performance situation, all the performers would be in the same room, and have the same overall room tone. Adding the same reverb to all the channels in a mix—even if it’s augmented by additional, specialized reverbs on some tracks—will, to some degree, put all the parts into the same space, and this can subconsciously help the mix hold together better, for a more natural, live soundfield, rather than sounding like a bunch of isolated, disconnected performances.

Newbies often try to do this by opening the same reverb plug-in on many tracks, but that’s inefficient and unnecessary. The same effect can be achieved much more easily by inserting a single reverb into an Aux channel, and feeding copies of multiple tracks into it.

The dry signals on the original tracks are brought to the main mix via their individual channel strips, but copies of all the tracks are summed (mixed) together and routed into the single reverb in the Aux channel. This then feeds a single (stereo) channel of reverb, effecting all the tracks, into the main mix in parallel with the original (separate) dry tracks. This kind of signal routing is called Send & Return hookup—here’s how it’s set up.

You’d start with a DAW mixer with several tracks that you want to add the same reverb to. Again, instead of adding multiple instances, one per channel, create an Aux channel and instantiate a single reverb there. To apply that reverb to many tracks, set the Aux channel’s input to be fed audio via an unused Bus—let’s say Bus 1 (if the DAW allows, you might want to rename the bus something like “Reverb 1”, for clarity).

The next step is to route copies of all the tracks you want to add this reverb to into that same Reverb Bus, summing them together and feeding them into the Aux, and through the single reverb plug-in. To make these copies, create Sends with a destination of Bus 1 (“Reverb 1”) on all the desired channels (most DAWs let you quickly do this for all at once with a modifier key). Now you’re ready to add the effect to all channels: since there are independent Send levels for each channels, you can send different levels of each track into the (same) reverb—the more level you dial up for a particular track, the more reverb you’ll hear on that track.

It’s kind of backward—instead of setting reverb level in the reverb (Aux) channel, you do it with the individual Sends; the more dry signal you send to the reverb, the more reverb you get. Since the amount of reverb you’ll hear for each track is controlled independently by the individual track Send levels, the fader for the Aux channel that holds the reverb is usually left at Unity Gain (±0). So you get the ability to add different amounts of the same reverb to multiple tracks with only one reverb—the reverb effect is Returned to the main mix via the Aux channel, where it blends with the separate dry signals for all the original tracks (via their individual channel strips). 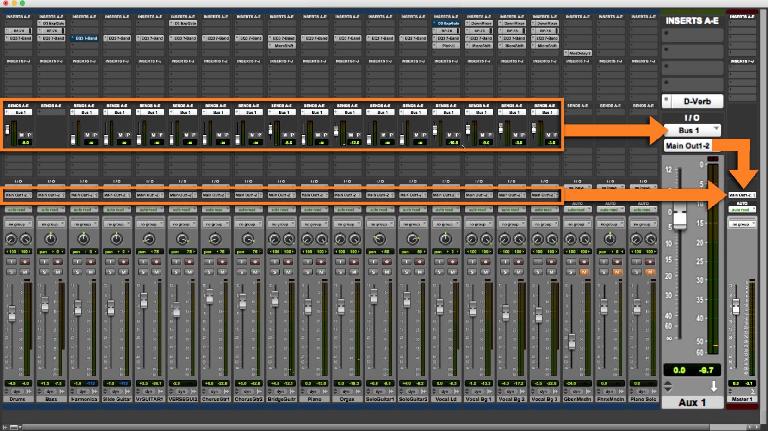 The key to making this work correctly is that you must set any dry/wet (original/effect) Mix control in the reverb to 100% wet—100% effect only. 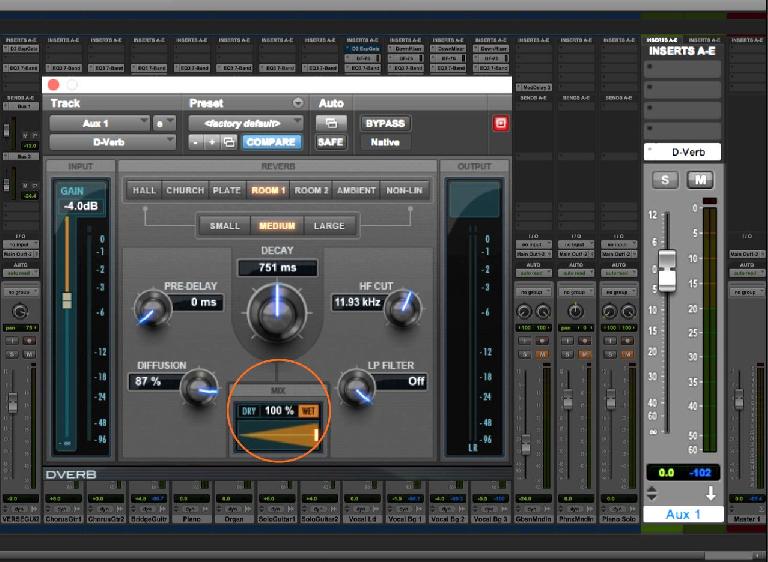 Not doing this is a very basic, though common, beginners’ mistake, and it can mess up the mix. That control is there in case you wanted to run a track through that reverb plug-in in-line—in that case it would let you balance the level of the dry and reverbed parts of the audio signal. But with the Send & Return hookup, you’re using parallel processing, so there’s already a path to the mix for the dry signals (via their own channel strips); all you want from the reverb/Aux is the effect-only. Accidentally letting some dry signal through a reverb in an Aux would mean that as you tried to add more reverb to a track, not only would that track sound “wetter”, but it  would also unintentionally be raised in volume, trashing whatever mix has been created with the individual tracks’ channel faders. So this 100% effect setting is critical to proper operation in Send &Return parallel processing.

Not Just For Reverb

Of course, although it may be the most common application, parallel processing is not just for reverb. Many effects—even ones that would most commonly be inserted in-line—can be used for parallel processing. For example, a clean electric guitar might be processed through an amp sim in parallel, combining the clean signal with a more distorted, bandlimited version. Or a DI’d bass part could likewise be parallel processed with a bass amp sim, again combing clean and slightly crunchy signals (DI+amp is common practice recording bass). In both cases, the clean signal would provide attacks and clarity, and the distorted or crunched signal would contribute edge, growl. and punch. In the case of the guitar, the clean & distorted signals could even be panned apart for a subtle widening effect.

Another very common use for parallel processing is Parallel Compression; this is so popular it even sometime goes by another name—New York Compression. Parallel Compression is probably most often used on drums, but it can be applied to anything; I’ve also used it on grouped backing vocals, to add thickness and sheen without losing details of the individual voices. On drums, it can allow very heavy compression to be applied for dramatic effect, without sacrificing the attacks and overall impact and dynamics of the drum track.

Parallel Compression on drums can be set up just as with a reverb: a Compressor is inserted into an Aux, and a bus is selected as that Aux’s input. Sends feeding that same bus are created on all the individual drum tracks (and/or on the LR overheads and drum LR subgroup), and signals from the dry drum tracks are summed together into the bus via the individual or LR Sends. Typically, very heavy compression is dialed up—often a dramatic squash that would be way too much if the compressor was used as an in-line processor. But when that dramatic, heavily squashed signal is blended in parallel with the dry drums tracks to just the right degree, you get the best of both worlds—a “big” dramatic drum sound that still retains the snap, attack, and musical dynamics of the individual dry hits. 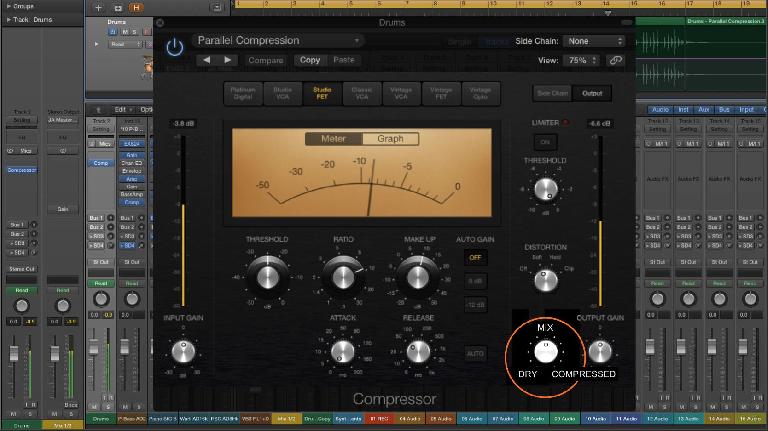 Set up a heavy compression effect with the Mix knob turned all the way up to effect only (the setting that would be used for normal in-line compression); then  back it down all the way to dry (original signal) only, and gradually dial up the appropriate amount of parallel compression.

When I was teaching recording, I saw that new students (with little or no prior hands-on experience) consistently struggled with concepts like parallel processing, and especially with the routing for Send & Return hookups. But once mastered, parallel processing is one of the most useful tools in any mixer’s toolbox, and it’s well worth the time spent getting a handle on the ins & outs of this technique.

Learn more about mixing and signal flow with specialised courses in the Ask.Audio Academy.