Joe Albano takes us beyond the basics of inline audio processing and shines a light upon parallel processing and the benefits and uses of using sends and returns when mixing with reverb.
Learn pro audio and music production tricks & techniques in Ask.Audio Academy or our sister site, macProVideo.

Using audio processors in a mix in a DAW is usually easy—just insert the desired plug-in(s) in each Audio or Instrument channel and make the appropriate settings. This is called inline processing—the signal in a particular track runs through each effect in turn; processing is applied; the processed signal is then sent along to the next processor, and so on. 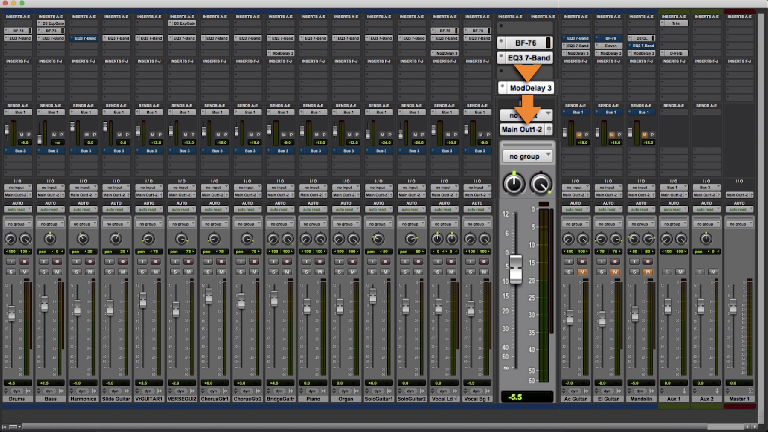 There’s only one version of the signal—the processed version—which runs through the rest of the channel strip and is eventually routed to the main stereo Mix bus.

But not all processing is done inline—sometimes a processor is inserted in an Aux channel instead. This is often done when it makes sense to apply the same processing to multiple tracks—instead of inserting the same plug-in in a lot of different tracks, one plug-in is inserted in the Aux, and signals from multiple tracks are run through it. The most common application for this approach is using the same reverb effect on a lot of different tracks.

As opposed to the use of inline processing—where the only version of the signal is the processed version—applying an effect in an Aux track to a signal from another track means there will be two versions of the signal—the original (dry) un-processed signal, running through the Audio or Instrument track, and the processed (wet) version from the reverb processor inserted in the Aux. Both are routed independently to the main stereo Mix bus. This method is known as parallel processing—the dry signal and the wet signal are mixed together in parallel into the Mix bus. 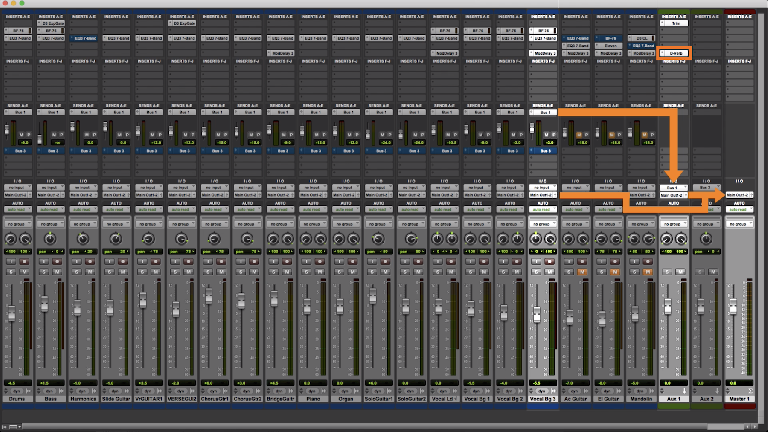 There are other uses for parallel processing besides reverb, but reverb is by far the most widely-used application—just about every mix has at least one or two reverbs in Aux channels, each applying processing to multiple tracks in the mix. The signal routing to set this up is not too difficult, but may budding engineers who are new to mixing and signal routing often have difficulty getting a handle on it. This article will provide a basic how-to for using and setting up parallel processing for reverb in a mix.

The routing that’s used to set up a reverb in an Aux channel for processing multiple tracks is called a Send & Return hookup. For reverb applications, it offers advantages over inline processing.

It’s common to want to add the same Reverb to multiple tracks in a mix—this can put all the instruments and voices in the same virtual room, providing a more cohesive ambience. Now this could be accomplished in a limited way by inserting a Reverb plug-in in the master Mix channel. All tracks in the mix would run through the Reverb, and the Reverb would have a balance control for dialing up the best blend between the dry (original) mix and the wet (reverb) effect.

The disadvantage of this, however, is that all the tracks would already be mixed when they hit the Reverb plug-in, and so all the musical parts would have the same amount of reverb applied. This is less than ideal, since it’s better to have more reverb on some tracks (drums, strings), less on others (vocals, guitars, keys), and none on some (bass). The best thing would be to have different amounts of the same reverb on the various tracks in the mix. Inserting the same Reverb plug-in on every track would accomplish this, but would be CPU-inefficient and inconvenient (when tweaks need to be made to the reverb sound). That’s where a Send & Return hookup comes in.

A Send & Return hookup lets different amounts of the same reverb (from one Reverb plug-in in an Aux track) be applied to different tracks in the mix. Here’s how it’s set up.

An Aux track is created, and a suitable Reverb plug-in is inserted in it. The Input of that Aux channel is set to an unused bus (remember, a bus is a signal pathway)—this will be the Reverb bus. Then Sends are created for all the tracks in the mix. When a Send is created in a channel strip, it makes a copy of the signal running through that channel and routes that copy elsewhere in the mixer, while the original signal continues through the channel strip (like a “Y” cable). For a Send & Return hookup, the Sends on all tracks are routed to the bus that was selected as the Input for the Reverb Aux channel. The Sends—the signal copies from all tracks—are mixed together and routed via the Reverb bus into the one Reverb plug-in in the Aux.

Each track’s Send has an independent Send output (level) control, allowing different amounts of each track to be sent to the Reverb. So if a track would sound better with more reverb, a higher Send level would be dialed up on that track; if a track would be better with less reverb, a lower Send level would be set there; and so on. The signal copies that are Sent to the Reverb (in different amounts per track) are then processed by the Reverb, and the combined reverb effect (reverb on all tracks in varying amounts) is Returned to the main Mix bus via the Reverb Aux’s output. 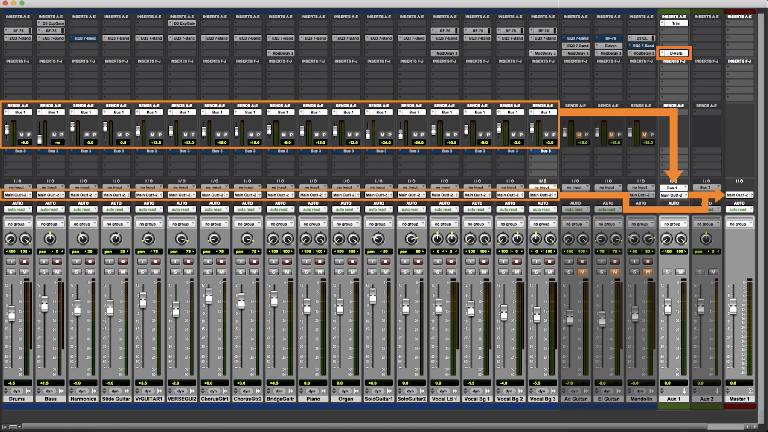 Now you have the best of both worlds—the one Reverb plug-in is efficient and convenient to tweak, but it’s still possible to have different amounts of that reverb on different tracks in the mix, by Sending more or less signal from each track to it.

There are a couple of things to watch out for when using a Send & Return reverb hookup. First off, the output of the Reverb plug-in must be set to 100% Wet—reverb effect only. If any of the dry signal mix (running through the Send bus into the Reverb) were to be passed through it would mess up the mix dialed up with the channel faders on the original tracks. In the Reverb plug-in there should be either separate Dry & Wet level controls (Dry should be set to 0, Wet at maximum); or a Dry/Wet balance control, which should be set to 100% Wet).

If you want to momentarily kill the reverb, don’t use the Reverb plug-in’s Bypass button—this will usually let dry sound through, again messing up the mix—instead, mute the Reverb Aux channel.

And finally, if you use a DAW shortcut to create Reverb Sends on all tracks at the same time, make sure there isn’t a Send to that Reverb accidentally created on the Reverb Aux channel itself—that would potentially cause an undesirable feedback loop. 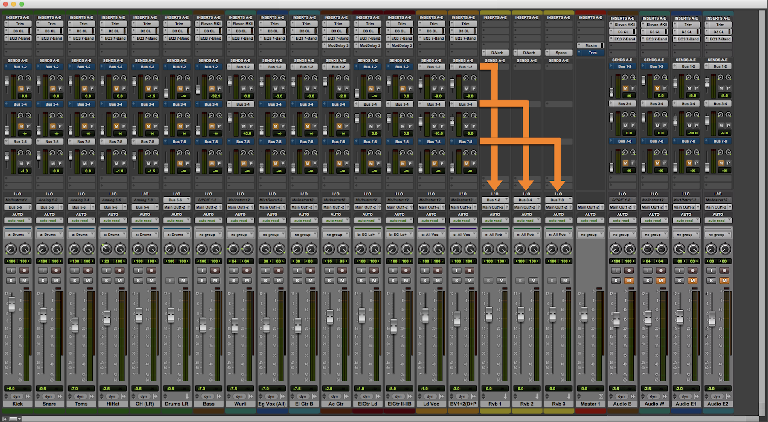 This would lets the mixer apply the same reverb to multiple tracks, but still choose the best reverb sound for different instruments/voices, and even mix together more than one reverb on multiple tracks, for creating depth in the mix.

While setting up a Send & Return reverb hookup may be initially a little confusing for mixing newbies, it’s easy enough to get a handle on, and will quickly become a standard procedure for mixing.