Quantizing is incredibly useful but there's more to it than just whacking on some random value. Here is G.W Childs with his guide to the core resolutions that will help you tighten up your EDM.

This is kind of the article I’ve always wanted to write. It’s not glamorous. And it’s a topic that tends to be shoved under the mat a lot. Nobody usually wants to talk about quantizing, as it technically is computer assisted music. But if you understand how it works, you can save yourself a lot of time getting that track tight and those drums bumping.

Welcome To The Grid

If you’ve worked with any DAW for any length of time, you’ll probably note that the grid is very important not only for arrangement but also for timing. Notes or beats that stray too far from the rigid grid lines are off-beat creating either a lazy feel or rushed notes that don’t seem to belong. 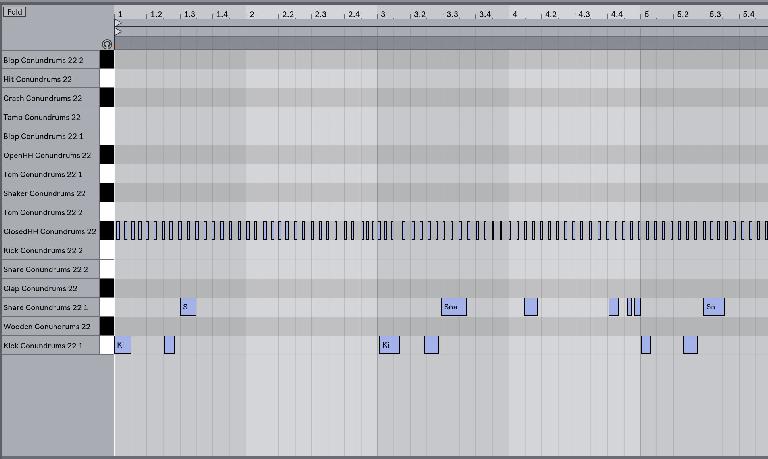 In apps like Ableton, grid deviations are usually pretty easy to see. You’ll see beats slightly behind a grid line, or slightly ahead of one. But if you’re editing an inexperienced player or you yourself are struggling to stay in time on your controller, there might be so many slow or rushed notes that it might take forever to manually push over each note. In fact, it can be hard to even know where to begin.

Where quantizing comes in so handy is that it’s essentially like dropping an upside down ice-tray on some gelatin. Regardless of how the gelatin is shaped, once the ice tray comes down, that gelatin will remember the ice tray, as it’s now been remolded in to the shape and grid size created by the tray! This is exactly what happens when you quantize! 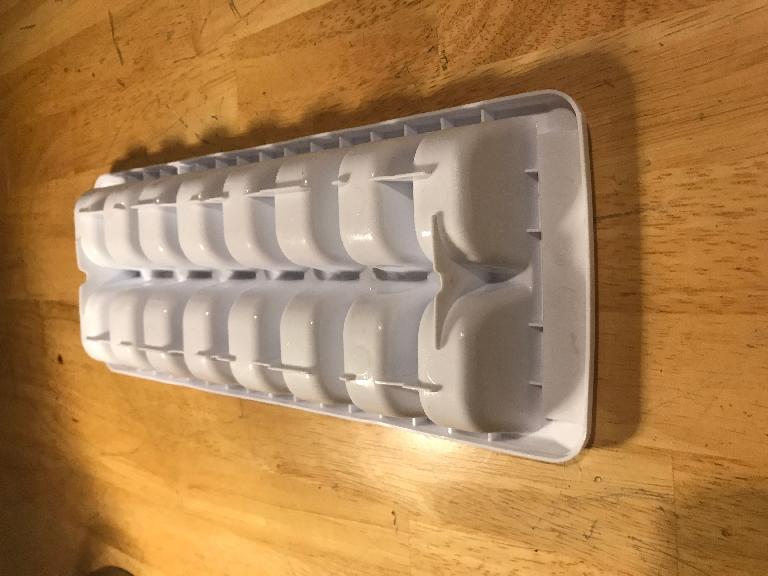 If you drop an 8th Note Quantization (the preferred resolution for basic rock beats) on top of four measures that have over 16 hits within each beat, within a 4/4 time signature, after the process runs you won’t have 16 hits within each beat any more. You’ll only have 8! Why? Because the smaller the resolution, the bigger the ice blocks. Meaning the smaller the note resolution (2-8th notes), the bigger the grid that is applied to your performance. 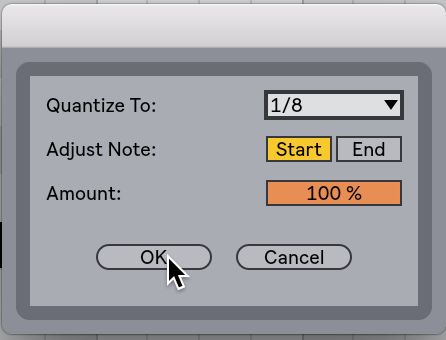 If you had 16 notes within a beat, and quantization left you only with 8 notes per beat, where did all the other played notes go? Generally, when a lower quantization resolution is applied to a drum beat, or performance that was played intended for a higher resolution, it will stack notes on top of each other in the form of the resolution grid that was applied. This results in a rough, flanging effect and can only be eliminated by deleting the stacked notes, which can be extremely tedious. 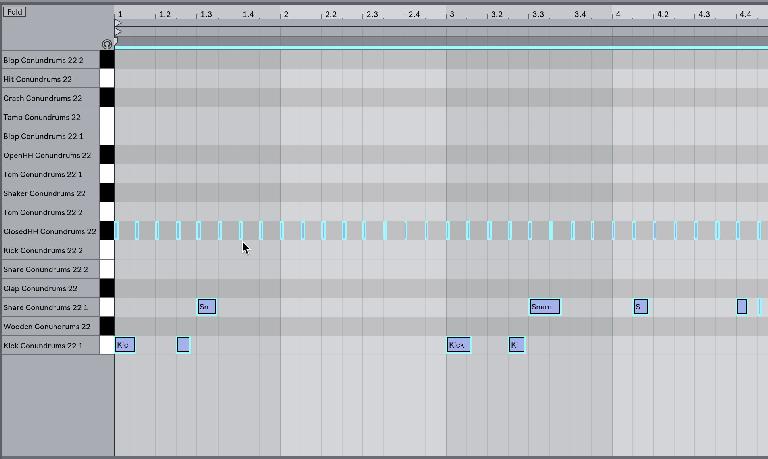 How To Wrap Your Head Around The Resolutions With 16th Notes…

At first, trying to guess how a quantize process is going to affect your work can be a little frustrating, until you embrace the music theory that the whole function is based on in the first place. Let’s start with the most common resolution used, a 16th note.

To understand a 16th note quantize resolution, let’s examine the number itself: why 16? During a 16th note quantization, the computer is expecting no more than 16 notes per beat, within a 4/4 resolution. The notes can be stacked. That’s okay. Snares and kicks can play on top of each other. But if one note is played quickly in the middle of one of the 16 notes played like maybe an errant high-hat, played within one of the 16 hits, it will be pushed over to the closest 16th note grid line. And furthermore, any notes that are played away from the 16th note grid lines being dropped on top of this musical gelatin will be pushed up exactly on to the closest gridline. 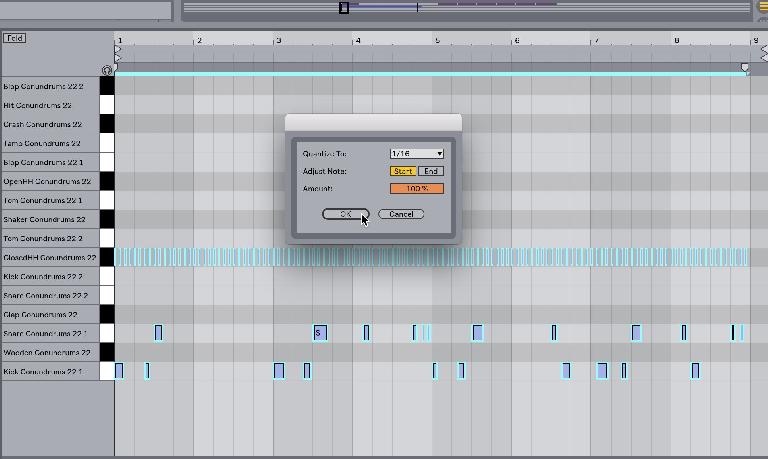 Okay, this is a highly complicated way of understanding 16th note quantization. However, another way of understanding it is that it’s a high action pop drum beat. When a song goes into a chorus or a high energy section of a song, it’s almost always a 16-beat in pop music. This isn’t true of every song but it’s more common than not. So when you think high energy, fast paced, a lot going on in terms of trance, EDM, EBM, techno, house, and anything that predominantly uses a 4/4 pop beat, think 16th notes.

There are some genres where this rule does not work. Hip-Hop, Trap, Industrial, Glitch, Jungle or Drum'n'Bass will break this mold. And this is where you’ll need to open your mind if you’re working with this form of project. But what about 32nd notes, 64th notes and all the after resolutions?

On more than a few occasions, I’ve encountered the misuse of higher resolutions, where someone would set their auto-quantize to a 32nd note or higher resolution. Through almost the entirety of their session, the hand played MIDI was actually played in a 16th note resolution. Sure, some beats or notes may have actually been intended to be outside of a 16th note grid. But when the entirety of a sequence is predominantly 16th and you drop a 32nd note quantize grid over the top… nothing happens. 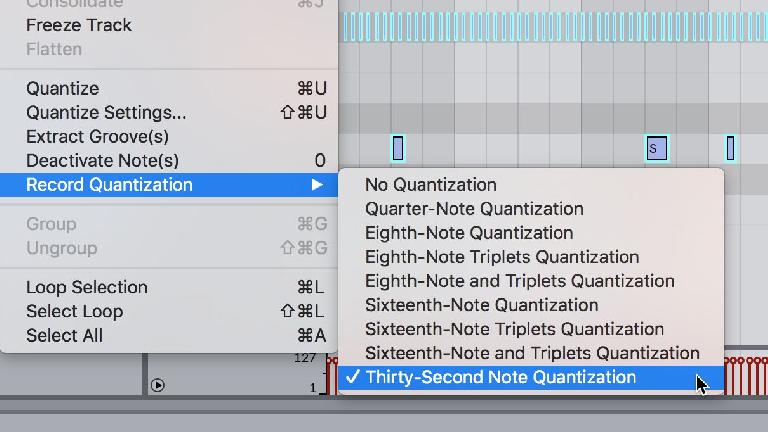 It’s not a broad or wide enough grid resolution to catch any of the errant notes. The result - a few notes are moved to the right location but the majority are left untouched, in slower or more forward positions. AKA - crappy, sloppy drum programming. They wind up hiring someone later to produce them. The first thing that they do is quantize their drums and it’s like they just waved a magic wand or something. Music theory is dope.

If you are not a Jeremy Ellis on the pads, or you aren’t a drummer on an actual kit, let the computer handle things. Set your auto-quantize to a 16th note resolution and drop in the higher resolutions later with a drum editor.

When I am converting recorded drums to MIDI, a 32nd note quantization grid will often times come in to play. And when I am drawing in drums, a 32nd note grid or even 128 absolutely comes in to play, as I am able to draw these events in with ease, and create mind bending rolls, shuffles and breaks, thanks to the precision of the grid. 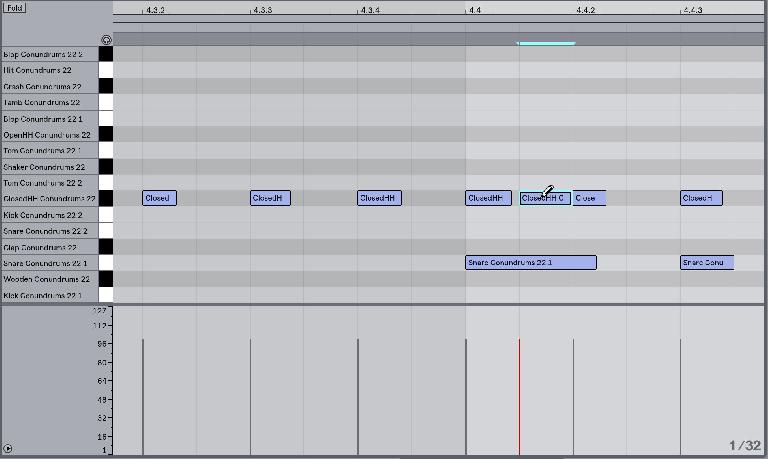 This covers the basics for the pop non-triplet resolutions and definitely should not be considered definitive. Hip-Hop, Punk, Trap, and many other genres work in entirely different resolutions. But if you understand the basics of quantize, you can easily wrap your head around the rest. Just figure out 16th/8th note first, and the rest will come easy.

Gilmourguru
You said per beat multiple times when you must have meant per bar or per measure. There aren't 8 1/8th notes in a beat, but 8 per bar in 4/4 time. And 16 1/16th notes per bar, not per beat. Otherwise, great informative article on quantization.