A Creative Approach to Music Production: The 5-Minute Trick

Language
Whether you're writing an opera, composing a pop song or constructing an EDM anthem, it's important to have your muse on your side. G. W. Childs shares a quick trick to keep your creativity flowing.

It's no secret that we, the artistic types, have a tendency to over analyze things. In fact, I'd say to some degree, the more artistic you are, the more prone you are to some level of perfectionism.

While some may hold the banner of perfection high above their heads, there does exist a greater possibility that too much time on an idea, concept, or melody can ultimately reduce the original promise to something that's over complicated and unworkable.

This is especially true with music. If you think about it, some of the best songs you'll ever write tend to be songs that just flowed out of you. You didn't really think, you just played. I know for me, I've written some of my best works when I was actually giving a class, or a demonstration. I'd just throw some stuff down quickly, for the sake of time. Then, before you know it, I'm jamming out and it just sounds good.

After doing this a few times, I decided that it was time to figure out the formula for this lightning creativity. And, here's what I came up with—The 5-Minute Rule. Try it, and see if it works for you.

Start off with any instrument within your DAW, hands, or even whistle. Don't think about it, just record whatever comes to mind. It doesn't have to be good, it doesn't even have to feel right. Just do it! Though, I would suggest keeping the recording somewhere in between 8 to 16 measures. You don't necessarily know if this will be a chorus, intro, or what not. But, it is good to have it segmented with some sense of organization. Plus, you want to be able to loop, right?

You may be tempted to start off with a favorite patch, or something familiar. I, personally, would advise an instrument, or patch that you've never used. Remember, you can always change it later.

Now, set up a timer. You know you have one on your iPhone! Set it for 5 minutes. Now, within those 8 to 16 measures, start adding drums, accompaniment, whatever. But, don't do this over 5 minutes. The point here is to push your creativity and force yourself to use spur of the moment creativity. And, this is a very good thing. 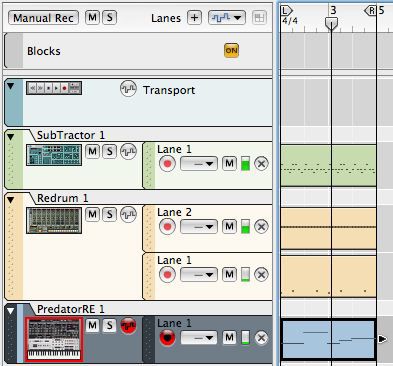 If you think about it, most of the reason that you can get into a rut of having everything sound the same is because you're using the same thought process for every song. By limiting your amount of time on any particular part, you force your brain and creativity into new terrain.

Once the 5-minute period ends on your timer, move those loop points over, so that they cover another 8-16 measures. But, the new area will be empty! Now, start the same process over again. Hum a melody, play a part, play some drums… But, don't think… Just do it! From here, repeat steps 2 and 3 as many times as you need to until you've completed the song. And, if you think about it, with two repetitions of the 5-minute rule and some copying and pasting, you will have a song written in about 20 minutes.

After the song is complete, I would suggest getting up, taking a walk, or just coming back the next day. Then… Start polishing.