A Brief History of Turntablism

Language
Have you ever wondered what Turntablism is, or its history and origin? Well, you've come to the right corner of the internet. Sara Simms provides a fascinating look into the history of turntablism.

What is a turntablist?

1) one who has the ability to improvise on a phonograph turntable
2) "one who uses the turntable in the spirit of a musical instrument" (DJ Babu)
3) a musician; a hip-hop disc jockey who in a live or spontaneous situation can manipulate or restructure an existing phonograph recording (in combination with an audio mixer) to produce or express a new composition that is unrecognizable from its original ingredients.

A turntablist speaks with his or her hands

The history of turntablism dates back to the late 1800s with the invention of devices that were able to play back sound. Thomas Edison invented the 'phonograph', which was a device that played recorded sounds from round cylinders. The quality on the phonograph was not the best and each recording lasted for one only play.

Edison’s phonograph was followed by Alexander Graham Bell’s graphophone. The graphophone used wax cylinders which could be played many times. Cylinder phonographs and graphophones were used to listen to pre-recorded music, and could also be used to make recordings.

On November 8 1887, Emile Berliner, a German working in Washington, D.C., patented a successful system of sound recording. Berliner was the first inventor to stop recording on cylinders and start recording on flat disks or records. The first records were made of glass, then later zinc, and eventually plastic.

Emile Berliner founded "The Gramophone Company" to manufacture his sound disks (records) and the gramophone that played them. To help promote his gramophone system Berliner persuaded popular artists to record their music using his system. He used Francis Barraud’s painting of 'His Master’s Voice' as his company’s official trademark.

Emile Berliner sold the licensing rights to his patent for the gramophone and method of making records to the Victor Talking Machine Company (RCA) who made the gramophone a successful product in the United States. 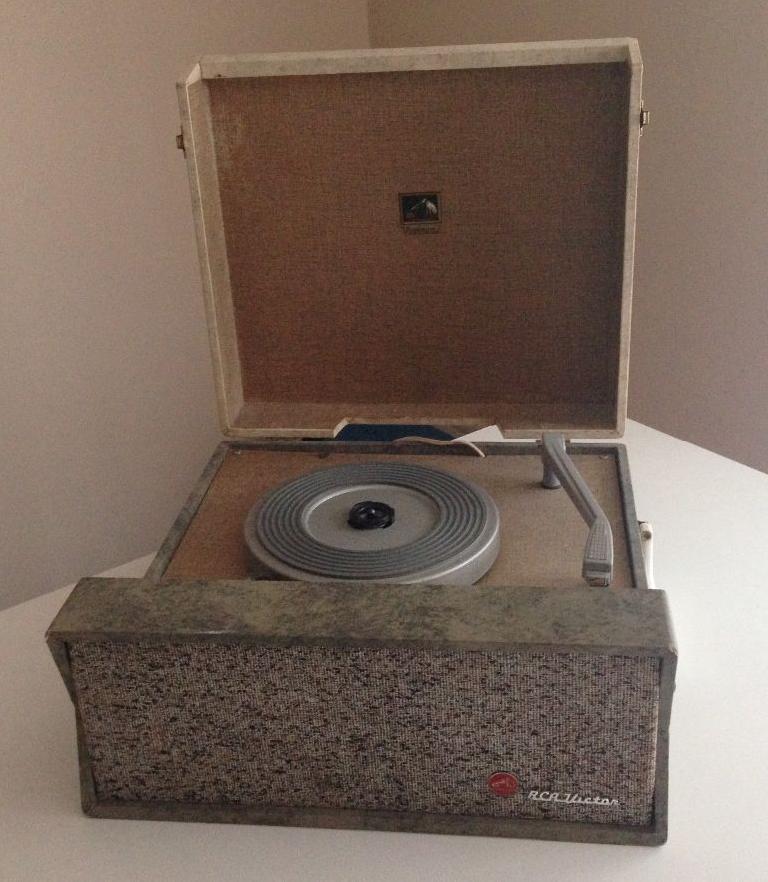 Hip hop formed in the 1970s when block parties became popular in NYC. DJs would play and scratch in the breaks in the record. Afrika Bambaata began organizing block parties all around The South Bronx. He formed the Zulu Nation, a group of socially and politically aware rappers, B-boys, graffiti artists and other people involved in hip-hop culture. He became known as the Master of Records.

Kool Herc was a Jamaican American DJ who used two copies of the same record to elongate the break. His breakbeat style Djing developed the blueprint for hip-hop music.

Grandmaster Flash is a legendary DJ who developed and mastered innovations that are still standard DJing techniques today. These techniques include the backspin (also called the quick-mix theory) punch phrasing, and the Clock Theory. By using duplicate copies of the same record, Grandmaster Flash would play the break on one record, and switch quickly to the other turntable where the same beat was cued up and ready to play. By backspinning, the same short phrase of music could be looped indefinitely. Grandmaster Flash and the Furious Five were inducted into the Rock and Roll Hall of Fame in 2007, becoming the first hip hop act to receive this honor.

In 1982 an American film called  Wildstyle was produced by Charlie Ahearn, and is considered the first hip hop motion picture. Grandmaster Flash was pictured DJing in the movie in his mother’s kitchen.

In 1983, scratching made its debut on record and on TV with Herbie Hancock. Grand Wizard D. ST (now known as Grand Mixer DXT) recorded the scratches for Herbie Hancock’s 'Rockit' which introduced scratching to a worldwide audience.

In 1984, Run D.M.C released their self-titled album, Run D.M.C, which made them the first group in hip hop to have a gold album. Their DJ, the late Jam Master J, went on to found the Scratch DJ Academy in Manhattan to "provide unparalleled education and access to the art form of the DJ and producer.”

1985—Mixmaster Mike (who later joined the Beastie Boys) began Djing. Scratching became much faster and tears were heard for the first time.

In 1985, the DMC World DJ Championships, an annual DJ competition hosted by Disco Mix Club (DMC) began. The first year the competition was a mixing only competition, then turntablism was introduced  later on.

In 1986 two scratches called chirps and transforms became being heard. The transform scratch has become associated with Philadelphia DJ Jazzy Jeff, who was one half of the hip-hop duo DJ Jazzy Jeff & The Fresh Prince along with Will Smith.

1988 was the 'Joe Cooley Era', in scratching, and the West Coast Djs became known for fast scratches and fast tears.

In 1988 DJ Cash Money performed using the Gemini MX-2200 at the DMC’s, and brought change to the culture through new equipment & skill.

DJ Steve Dee from Harlem, NYC was the inventor of beat juggling and the founding member of the original DJ group "The X-Men" (today known asThe X-Ecutioners). The original name for beat juggling was simply 'The Funk'. In 1990, Steve Dee won the New Music Seminar Battle for World Supremacy and in 1991 won the DMC East Coast Championship.

During the late 1990s Vestax launched a new flagship range of professional DJ turntables. The PDX models had higher specifications than the Technics SL1210/SL1200 and were priced in direct competition with them. 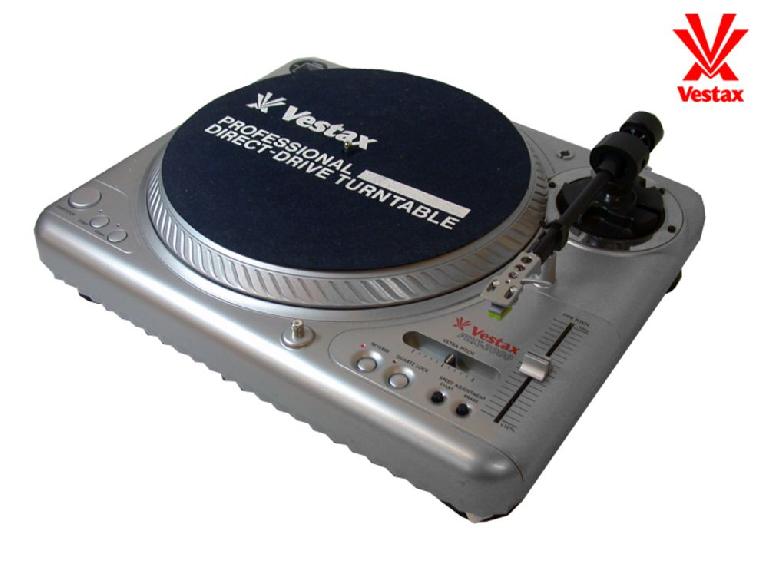 In the late 1980s and early 1990s many innovations took place in scratch culture, and in 1992 Team Scratching was introduced at the DMCs. Around this time, an important scratch called the Original Flare was invented by DJ Flare. DJ Disk, who was DJ QBert’s partner in the early 1990s invented the Orbit, (also known as the two click flare) and D-Styles invented the one click flare. DJ Flare Invented the three-click flare, and a variation to the three click flare.

In 1992, DJ Qbert, Mixmaster Mike and DJ Apollo joined forces and became the Rock Steady Djs. Together they won the 1992 Disco Mix Club World DJ Championships (DMC) world title. Qbert was also one of the founding members of the Invisibl Skratch Piklz, who were the first to apply the band concept to turntablism. DJ Qbert is a true legend; he’s invented many techniques and scratches, and formed a company called Thud Rumble which helps to promote turntablist culture. He’s also the winner of many DMC World Championships together with Mixmaster Mike, including the DMC World Championships in 1993 and 1994, performing under the name Dreamteam.

In 1996, combos with crabs and flares started being heard as turntablism evolved. Another notable event in 1996 was DJ Swamp’s outstanding routine at the DMC US DJ Championship. As a first-time entry, he performed a rock based routine and won the title. DJ Swamp went on to form Decadent Records, which allowed him to distribute his scratch tools vinyl and digital releases. Under this label he invented several DJ tools that are considered standards, including his infamous "skip-proof scratch tool" records which have the same sample repeated over and over. This technique has been copied by most battle breaks and scratch records.

In 1997 DJ Qbert, along with his crew The Invisible Skratch Piklz, created a series of videos entitled Turntable TV. Now out of print, the first 5 episodes were released on VHS and contained demonstrations, showcases, skits, and other DJ related content. 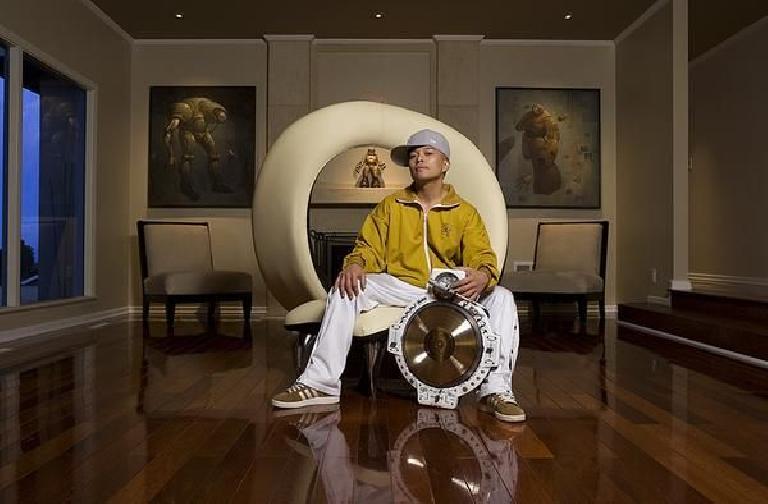 In 1998, the Scratch Perverts, a UK DJ duo emerged onto the scene. Their technical contributions include the 'feedback' technique, inspired by Jimi Hendrix. That same year, DJ Qbert released WaveTwisters, a live action movie that was animated to a scratch sound track.

In 1999 the turntable outsells the electric guitar in Japan. Scratch DJing becomes popular worldwide and many top turntablists are booked to play at big raves.

By the year 2000, turntablism and turntablists had become widely publicized and accepted in the mainstream and within hip hop as artists. The advent of digital DJing made it possible for turntablists to perform using software like Traktor and Serato. Digital turntablist techniques and new equipment gave birth to controllerism, the art and practice of using musical software controllers to create music.

DJ battles have historically been, and continue to be an important way for DJs to showcase their turntablism skills, and advance the art form. In the 'Golden Age' of turntablism, the three major DJ competitions were: DMCs, ITF, and the Vestax DJ Extravaganza. Current major battles for DJs include the DMCs and Red Bull Three Style. After learning turntablist techniques, DJ battles are often the starting point for turntablists to begin their careers.