If you've ever been confused by the terminology around studio connections - TRS, S/PDIF, MegaOhms and more - then worry not. Joe Albano is here to make everything clear.

When today’s DAW users sit down to make a recording, they’ll potentially be dealing with a lot of different inputs and routings to get their musical performances into the box. Between audio recordings, MIDI recordings, microphones, keyboards, guitars and basses, there are many different connections, hookups, and signal types that the intrepid recordist will have to wrangle to lay down the best possible tracks. For novice DAW recordists still getting a handle on all the options, or just right-brain types who are more musical and less technical, here’s a basic primer on the various inputs and connections—both analog and digital—that come into play in modern recording setups.

Let’s start with analog audio sources and inputs. There are three different types of input signals and connections: mic inputs, line inputs, and instrument inputs. Each of these is meant to accept audio signals from different sources, that come in at different levels and require different connectors and input impedances from the inputs on the interface to correctly transfer the cleanest audio signal into the DAW.

Mic inputs utilize balanced, three-pin XLR connections for both the mic cable and the interface’s input jack—they’re designed specifically to accept signals from microphones. A mic signal comes in at a lower signal level than an electronic instrument signal, so mic inputs—the mic preamps in the interface—are designed to take in a low-level mic signal cleanly, and offer more Gain—often  50-60 dB or so—to boost that signal up to the standard line level.

Line level is the standard operating level for analog audio signals, the level those signals must be brought up to for clean, noise-free signal flow. Consumer gear operates at a lower level (-10dBV) while pro and semi-pro gear runs at a higher line level (+4dBu); most DAW interfaces probably operate at the higher pro level. Line-level audio sources provide signals that are already at or around that level—these would include items such as synthesizers, keyboard workstations, drum machines, and the like, as well as signals from hardware audio processors like external preamps, EQs, and compressors. Since these signals are at standard line level already, line level inputs don’t need to provide much Gain, and since their output impedances are typically higher than microphones’, the input impedances for line-level inputs on the DAW are usually around 10kOhms or higher.

In most DAWs, line-level inputs utilize the ubiquitous 1/4” jacks; they (and the associated cables) come in two varieties—balanced TRS and unbalanced TS. A balanced TRS 1/4” connection uses three pins, like a (balanced) XLR cable—Tip, Ring & Sleeve (for ground); an unbalanced TS 1/4” connection uses only two pins—Tip & Sleeve. Balanced connections are better at rejecting hum and noise and are preferable. TS and TRS input jacks look the same, though the cables are visually distinguished by the extra Ring on the TRS plug. 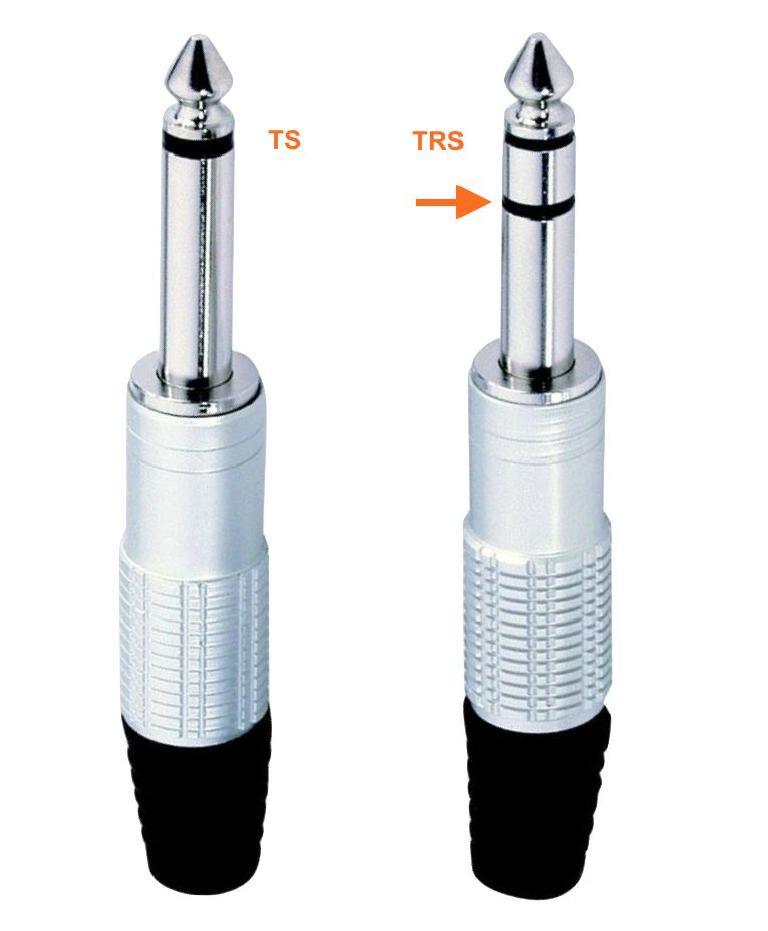 The third type of analog input is the instrument input. This is specifically designed to accept signals from electric guitar and bass, plugging the instrument straight into the interface (D.I. or Direct Injection) instead of into an miked-up amp, using virtual amp plug-ins to process the raw, dry sound. This is where it’s easy for a novice recordist to go wrong—instrument inputs use the same 1/4” connections as line level inputs, but in this case they’re TS, and the impedance is different from that of a line level input.

Electric guitars and basses have a very low output level and very high output impedance, so instrument inputs need to provide a lot of clean Gain and a suitably high input impedance, typically around 1MegaOhm. If you mistakenly plug an electric guitar or bass into a line level input, you’ll likely end up with a noisy low-level signal with frequency-response losses from the output->input impedance mismatch. To further confuse things, while some interfaces offer separate, clearly-labelled line and instrument 1/4” jacks, others may incorporate dual-purpose 1/4” inputs which may be able to handle either, via a line/instrument switch or adaptable gain/impedance circuitry. Sometimes a quick look at the manual may be needed to use these inputs properly.

Digital audio inputs are also usually included on all but the smallest DAW interfaces. There are two main types typically found on most interfaces—stereo S/PDIF or AE/EBU connections, and multitrack (8-channel) ADAT “lightpipe” connections. S/PDIF (consumer) and AES/EBU (pro) digital audio connections carry a stereo digital audio signal into (and out of ) the interface, and they’re pretty much the same, except for the connectors themselves. An AES/EBU input uses an XLR connection (one jack for both channels), while a S/PDIF digital input uses an RCA connection (again one jack for both channels)—the latter is more common on all but the most high-end interfaces. Stereo digital signals may come from digital tape or standalone recorders, or sometimes from keyboard or rhythm workstations.

Originally created to pass 8 channels of digital audio on a single optical cable between ADAT hardware digital tape recorders, this standard has become the most popular way to add extra inputs (and outputs) to a DAW interface. Interfaces typically offer one or two sets of ADAT i/o, adding 8 or 16 digital inputs at standard Sample Rates (44.1/48k) and half as many at higher SRs. Probably the most common application for ADAT i/o is 8-channel mic preamps that add additional inputs to the DAW interface over the lightpipe connection.

There are other standards for digital audio i/o (& networking) found on higher-end interfaces, but those two are by far the most common and accessible, so that’s all I’m going to cover here.

Using digital inputs on a DAW interface brings another consideration to bear—clocking. The internal timing of the flow of data in all digital audio streams is controlled by a very stable high-quality clock circuit, which ensures that the digital data is processed and transmitted correctly. Every individual hardware device that processes digital audio—including every DAW interface and AD Converter—has such a clock. When digital audio is passed between these devices—like when a digital input is used to bring extra channels of digital audio into an interface via ADAT lightpipe—the clocks on the two hardware boxes must be sync’ed, or the digital audio may be rendered as a loud blast of digital noise! There are two ways to do this.

For smaller setups, like a single 8-channel mic preamp sending audio to a DAW interface from its ADAT out to the interface’s ADAT in, the clocking signal is included along with the audio in the same cable/connection; all you have to do is to set the receiving device’s clock to sync to the clock signal from the digital input, and everything should work perfectly. For larger high-end setups, with multiple devices that each have their own clock, all the hardware units’ clocks must be sync’ed. This is usually done via a separate sync-only connection called Word Clock. A dedicated master Word Clock device sends clock signals to dedicated Word Clock inputs on the various preamps and interfaces. Usually only available on high-end gear, Word Clock i/o utilizes BNC connectors.

Finally, besides digital audio inputs, most modern recordists will be dealing with MIDI inputs. A MIDI signal, of course, contains no audio data, only performance data (notes, controllers, etc), which is recorded on a Virtual Instrument track, triggering the synthesized or sample-based instrument sounds from that internal audio source live during recording and playback.

MIDI is a separate connection, routed in parallel to any associated audio connections. Even if the audio source used is an external electronic instrument, the MIDI data going to that instrument and the audio signal coming from it back into the DAW will usually be carried on different cables/connection. Here are two typical MIDI/audio hookups.

With a Virtual Instrument plug-in as the audio source, the MIDI connection is easy. Only one cable is needed, from the keyboard, drum pads, or other hardware MIDI controller into the DAW. 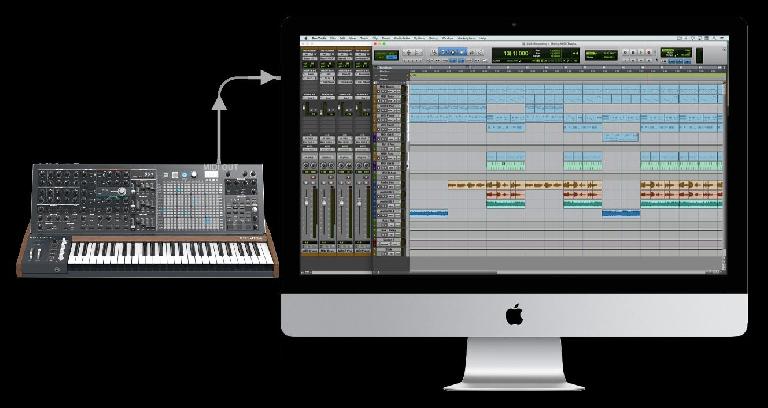 Older MIDI controllers used a dedicated 5-pin DIN cable, and this connection is often still used as a MIDI output on modern controllers, for universal compatibility. Some DAW audio interfaces include a 5-pin DIN MIDI input, and that’s one way to get the MIDI data into the DAW, where it’ll be routed in software to the desired V.I. Nowadays, MIDI connections to the DAW are most commonly made via USB. A controller with a traditional MIDI DIN output would be plugged into a dedicated MIDI interface that will carry one or more MIDI signals into the DAW over a standard USB connection. Modern controllers typically have a USB output, and can connect directly to the computer.

If the audio source for a MIDI recording is not an internal V.I. but an external instrument, then the hookup is a little more complex. The MIDI performance data is still brought into the computer as described above, but then it’s routed back out a MIDI output to the hardware sound source; the audio is then brought into the DAW through standard (line level) audio inputs. 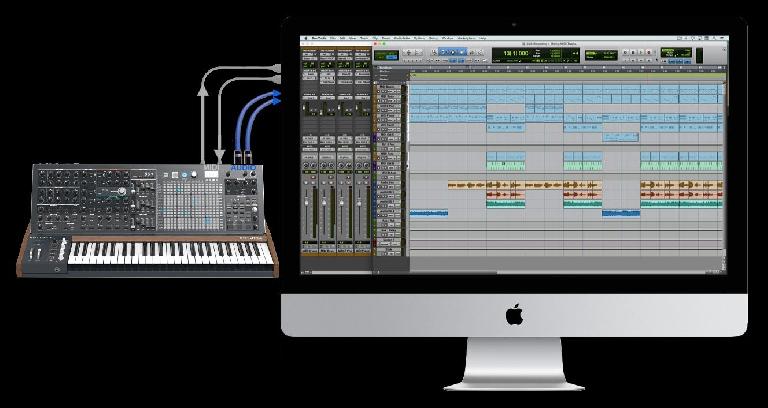 If the controller (keyboard) and the external sound source are the same hardware device, the internal connection between keyboard and sound engine must be broken, by turning a function called “Local Control” to Off in the hardware’s MIDI or Setup page, to avoid double-triggering.

So there are a lot of different input connections and considerations for the modern DAW recordist to keep straight, but with a little experience it’s easy enough to get a handle on them, ensuring proper hookups and the best recordings possible in all sorts of DAW projects.