Language
Do your sound design landscapes lack a little depth, feel less real than they could? G.W. Childs, sound designer and trainer is on-hand to help your sonic landscapes stand out from the crowd.

Whether you’re building ambiences for a video game, or just building some cool environments for your songs, building a convincing environment isn’t always easy. This stands true no matter how many tracks you throw down! In this article, let’s go over some ways to create not only convincing sound design landscapes, but also  environments that feel more real.

One rule that I learned directly from one of the greatest sound gods, alive: Ben Burtt, is to keep it simple. Of course, you can throw sound effect upon sound effect over the top of one another, but that will only wind up giving you a very noisy section. Instead, try to keep your environments minimal with sounds that you really know you will hear, intermittently emitting, as opposed to running non-stop. And, give everything its own location within your mix.

Most sound designers pull from personal audio databases composed of audio files that either they, themselves have recorded, or they are pulling from a sound library they’ve purchased. Few people ever think to have a synthesizer like Harmor, from Image-Line, convert their audio to a synthesized recreation, and then exploit what’s possible when audio is being recreated from a partial bank. Additive synthesizers are extremely powerful for convincingly recreating real audio, and then letting you do things that don’t make sense like stretching out sounds that would only be annihilated if being edited with something like an audio editor, or sampler. You might also check out boutique synthesizers like Skanner XT, from NI, of Iris 2, from iZotope, that morph audio in to new and sick creations.

Strangely, I’m constantly listening to audio from new designers that sounds good, but sits right in the middle of an audio mix! Nothing sounds more unconvincing than an audio environment where everything is dead center in the mix. Real environments are never this way. As you mix down your environments, try to see where everything is, within your mind, as you listen. Place some birds to the left... Maybe even automate them moving from right to left, heaven forbid! Try panning effects to one speaker and the source audio to another. Try to make what you hear in the speakers sound like what you hear on a long walk! 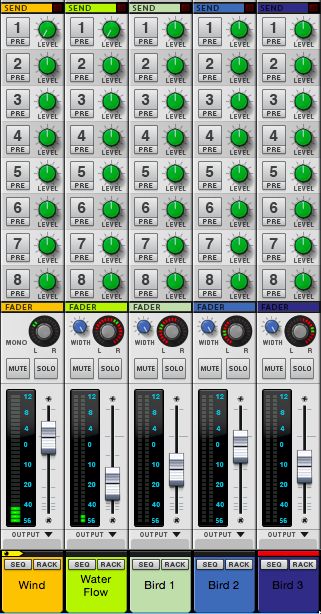 Good panning is essential to build a convincing environment.

A nasty habit for any sound designer to get into is to keep using the same tools, over and over again. Don’t be predictable! And, keep exploring new tools. Try using new and different effects and audio sources, like synths every once in a while to give yourself a greater idea of what possibilities are out there. Remember: These days, you don’t have to buy new plug-ins without knowing what they do, or how they sound. Try downloading some demos, get familiar with what’s new! This will only expand your sound-making arsenal, and keep you sounding a step ahead of the rest.

Nothings says I don’t really give a damn, quite like an environment that sounds like life inside of a toilet, or a bathhouse. And, that’s what you get when you start overdoing it with reverb, and echoes. A little bit of effect is great for accentuating an atmosphere, but it only takes a little bit. Hold back on that mix knob and keep the reverb in the back so that your sources still retain some of their crispness.

A great habit, especially for environments is to actually use auxiliary sends and returns and keep only a couple of effects that can be spread across multiple sources. This keeps a uniformity in the mix, and makes it sound like everything really is in the same room. When you start putting everything on its own insert, not only do you tax your CPU, but you also continue to add new environments, rather than keeping all your players in the same stage.

6. White Noise is Your Friend

You’d be shocked at all of the locales you can build just by starting with some raw, white noise. White, Brown and Pink Noise make up the core of what we hear in any environment, to some degree. By sculpting noise, with filters and EQs, it’s almost as if we can carve out rooms and areas of our own, through sound. Next time an environment sounds too clean, try adding in some low, filtered white noise, rumbling somewhere in the background, when trying to create a more authentic audio environment. This is especially cool when trying to emulate radios and comlink style effects—Run some white noise low, underneath someone speaking, and then filter the main out, so that the noise and voice are running through one filter. Instant stormtrooper/ham radio!

If you’re creating a looping audio environment, try to avoid using too much of the same sound. For example, if the audio environment that you’re building calls for birds, find two or three different bird-audio recordings and intersperse, lightly throughout. Each bird sound playing at a different time, in different parts of the recording. Some sounds can get really annoying, if played more than a couple of times. Or, even worse, playing the same sounds more than once in an environment may make it sound fake! In the real world, landscapes are very dynamic. Sounds erupt out of nowhere, and die off into nothing. Cars peel out, alarms go off. Throwing in a couple of wild card events in your environments can really build the authenticity up, although you don’t want these periodic eruptions drawing too much attention to themselves. So, throw in dynamic changes, but keep them in the back, so that you don’t scare the hell out of your listeners.

Most sound designers actually prefer real audio, as opposed to synthesized audio, as there is far more authenticity, even to the biggest laymen of sound, than something created by a synthesizer. And yet, with the right effects and the right positioning within a mix, some synthesized sounds can sound more real than the real thing. Personally, I enjoy mixing synthesized sounds with real sounds, as this tends to create an end product that really does stand out from the rest. You aren’t hearing that same old gunshot used in over a hundred movie trailers. Instead, maybe you’re building a new blast. It’s really easy to pull from the same old stock audio, over and over again. It’s the guys that are constantly looking outside of the box that ultimately further the art form, and keep the creative pool growing.

Tom
Not sure I agree with #4. I feel you should master the tools you have. I don't understand producers who have their hard disk loaded up with countless plugins that they hardly ever touch, many of which do the same thing.