Mixing is that darkest of arts, and every project requires a different treatment. But Joe Albano is here to share his experience with these top mixing tips that you need to know.

Mixing is a complex process—a blend of art and science, of technology and creativity. Even veteran mixers are always discovering new ways to approach it, and novices are always looking for new ideas. Here are - in no particular order - 9 general suggestions for things to think about and watch out for when engaging in the art of the mix.

Naturally you’ll need a pair of proper studio monitors, rather than relying on headphones or hi-fi speakers. Hi-fi speakers are often hyped to make everything sound better, but for mixing you need a flat frequency response that lets any flaws in the mix come through clearly, so you’ll hear them and fix them. And headphone listening is technically a different experience than speaker listening—different enough that mixes make exclusively on headphones often won’t sound as good (in terms of clarity and image, especially) when heard on speakers. Ideally mixing should be done primarily on studio monitors, occasionally checking the mix on headphones and other (less accurate) speakers, to make sure it’ll “travel” well (sound good on other playback systems).

2. Make Sure The Room Doesn’t Get In The Way

Before even starting a mix, you need to be sure the room itself will not be an impediment to getting good results. The acoustics of typical (rectangular) rooms usually offer a number of impediments to accurate sound, that can fool the mixer into making adjustments to fix room problems rather than actual mix problems—inevitably these inappropriate “fixes” will make the mix sound worse when it’s heard in any other room (that doesn’t have the exact same problems). Standing Waves are irregularities in bass response (caused by low frequency reflections) that occur only in certain locations in a room; these should be addressed by means of physical solutions like Bass Traps if possible, and at the very least the positioning of the monitors and the Sweet Spot (primary listening position) should avoid any of these problem locations (plenty of reference material is available to figure all that out).  Strong mid and high frequency reflections can create problems like slap echo, flutter echo, and excessive comb filtering, which may color the sound enough to result in poor decisions when it comes to EQ, delay-based effects (chorusing, etc) and the use of artificial reverb and ambience. Absorptive wall panels can be employed to minimize these problems (again, plenty of reference material is available for guidance).

When mixers start really getting into a mix, they’re often inclined to pull marathon sessions, but mixing too long without a break can have detrimental effects on the final results. Everybody’s ears get fatigued, and as this happens gradually in a marathon mix session, there’s a tendency to overdo processing like EQ and compression, to compensate for the subtle loss of clarity from our own hearing apparatus. Additionally, it’s easy to get so used to hearing the mix that poor choices or weak balances can become so familiar that the mixer doesn’t even notice them.

The best approach is break things up—take frequent breaks (every couple of hours or so, if possible) to clear your head and your ears, and then come back to the mix a little fresher. These breaks don’t have to be long (15-30 minutes is plenty), and it’s a good idea to get away from the mix by listening to something else during the break(s). That way, your ears will have to recalibrate to the mix when you return to it, and you’ll hear details you would have otherwise glossed over. Ideally, after finishing a mix, you’d come back to it the next day for a final check—flaws you’d gotten used to will often jump out and be as obvious to you as they’ll be to others hearing the mix for the first time.

DAW mixers are full of meters dancing along with the mix, and many modern mixers know that thanks to the enhanced headroom of modern the DAW’s 32-bit processing very often the red overload buttons on the channels can be safely ignored without any audible distortion, as long as the master channel doesn't go into the red. But (though some might disagree) I would suggest it’s still best practice to avoid overloads in the channel strips as well, for a couple of reasons.

One is that if you get used to the bad habit of ignoring overloads in the box, when you sit down at an analog console you’re likely to run into problems straight away. Even inside the box, there are many plug-ins that emulate analog processors (often classic vintage devices) and some of these may be programmed to react like the original analog hardware they’re modeled on, resulting in excessive distortion or compression that will fail to achieve the subtle analog sound quality you paid all that money for. Once you get used to setting up levels, it’s a simple matter to avoid overloads throughout the virtual console, and your mixing technique will translate better to other environments, to boot.

Everybody likes to jump right into a mix with compression and EQ, but I usually start with panning. The clarity of the mix can be significantly affected by the overall left-right orientation of the various tracks and parts—this can affect more than just mix balances, and it can have arrangement considerations too (how well a double or harmony line comes through, for example). Except for obvious corrective processing (like, say, EQ to fix a glaring tonal flaw) I prefer to set up the panning even before I begin tweaking the sound of the individual tracks. By getting everything into position in the stereo soundfield, I feel I’m better able to hear how it’ll all blend together, and to make appropriate subtle tweaks as the mix builds up.

Besides left-right panning, a good stereo mix should have some sense of depth as well—note I’m not talking about surround sound here, just the perception of depth between the normal left-right stereo speakers. Even with the usual dry tracks from typical multitracked overdub sessions, a sense of depth can be achieved with the subtle use of delay and ambience. Adding a very subtle short-medium delay to a track can, thanks to psychoacoustics, pull it towards the back of the mix a bit.

Using different reverbs on different groups of instruments or vocals can also provide for varying degrees of depth. Another trick is to employ two reverbs in separate Send & Return configurations: one will be a tighter ambience that sits under the dry signal(s) and the other a bigger reverb with a bit of initial gap. Various tracks are sent to both, in different amounts—sending more to the ambience can pull a track back in the mix, but the reverb with the initial gap will leave the dry track closer to the front of the virtual soundstage. Of course, all of these methods combined can provide a lot of options for subtle front-back depth in a typical stereo mix.

7. Have A Good Reason To Add Processing

Your typical DAW mixer—even on its own—provides tons of processing for the mix (EQ, dynamics, delays, reverb, distortion, etc), not to mention the host of third-party plug-ins available in most setups. But sometimes it’s not a bad idea to apply that old saw to the mix process —“if it ain’t broke, don’t fix it”. It’s tempting to add EQ, compression and other effects to just about every track simply because you can, but not every track needs a lot of processing—or any processing for that matter. Many tracks in a mix may consists of electronic or sampled sources that already have enough processing applied to them at the source, as do many acoustic recordings (like an electric guitar taken from a guitarist’s elaborate rack of effects).

And even vocal parts don’t necessarily need a lot tweaking—if a good mic is used, properly positioned, there may not be any need for EQ (I rarely use it with my studio’s U87), or at most a half a dB to a dB for a very subtle balance adjustment to help the part sit in the mix just so. The same goes for many effects—it’s worth taking a minute to see how each track sounds in the mix (as it’s built up) before applying a preferred tweak (like automatically adding a bit of treble, or a midrange dip). Applying heavier processing initially can often make the mix get away from you a little, resulting a a tonal character that, while sounding well-balanced, has a more processed, “canned” quality to it then it needs.

8. Think Outside The Box 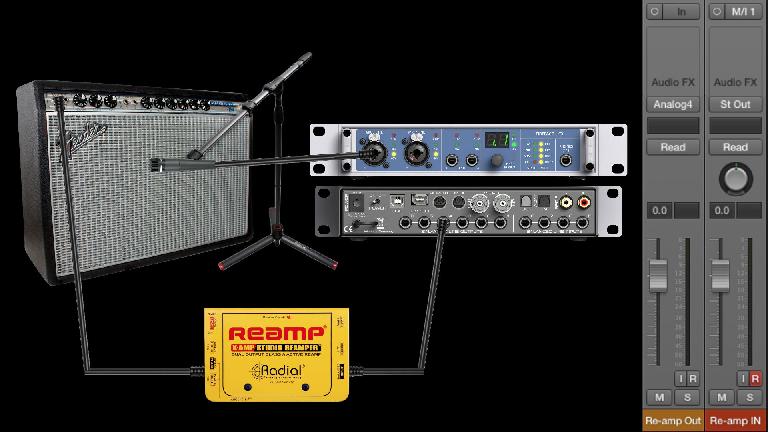 Mixing entirely in the virtual domain is by now well established, but sometimes it’s still a good idea to turn to external processing. A traditional analog unit—like a classic or vintage EQ or compressor—may bring a little something extra to the party, even beyond what you can get from the many excellent modeling plug-ins out there. A good example might be re-amping, where instead of using a virtual amp sim, a dry (DI’d) guitar track is routed out to a real amp in the studio, whose output is then picked up by a mic and brought back into the box. Besides capturing the exact sound of a player’s favorite amp, techniques like this can often add a little more of that elusive three-dimensional quality to certain elements of the mix. 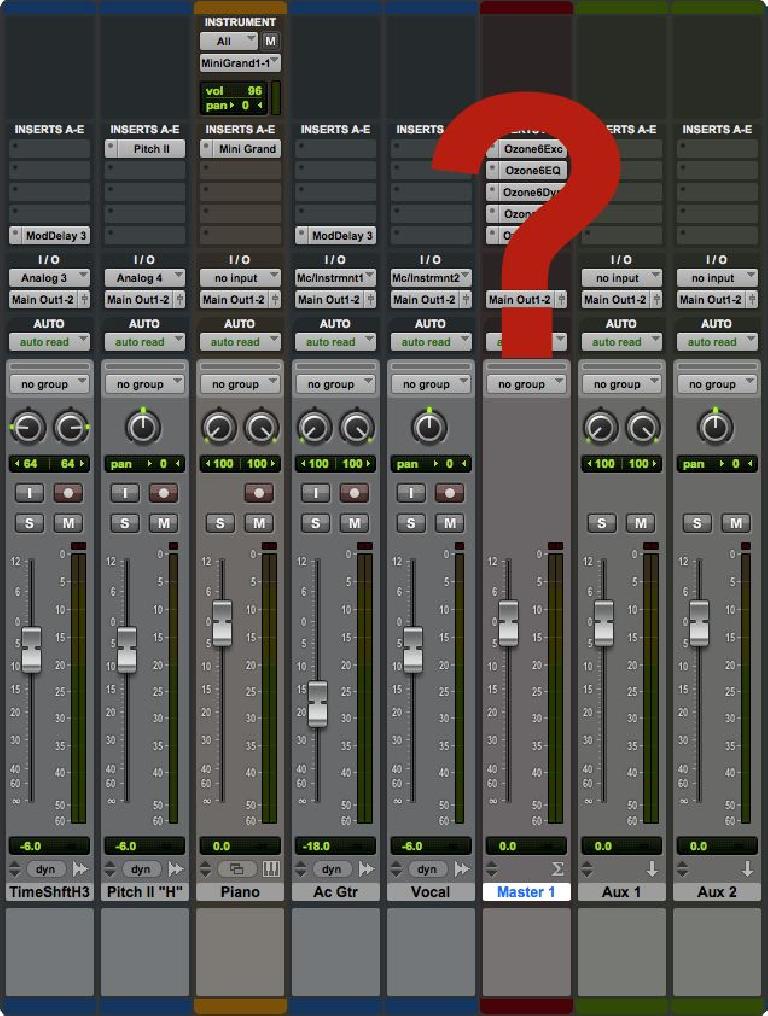 This is another one where many engineers disagree, but I always recommend that a mixer not apply processing to the master stereo bus as part of the mix itself—instead that should be left for the separate, later mastering stage. There are a couple of reasons I feel this can be a better approach. One might be to have a different person do the mastering—a fresh set of ears can often pick up on issues that a mixer who’s too familiar with the material might miss. Even if it’ll be the same person doing the mixing and mastering, taking a break when the mix is done and coming back to it fresh for the mastering session is always a good way to hear the mix a little closer to the way others may perceive it.

As far as processing in the master stereo bus, I feel that when it’s applied during the mix, the mixer might come to depend on its overall smoothing, “glue” effect too much, instead of tweaking each track more carefully. Additionally, as the industry trends toward less heavy limiting I think that having a version of the mix that can stand on its own, with little or no bus processing, will potentially make that mix a bit more future-proof going forward.

So those are just a few simple suggestions for approaching the art of the mix. I hope they’ll be of use to some budding mixers, producers and artists out there sitting in front of their DAWs getting ready to jump into their next mix.