Language
I've been inside Apple's ecosystem for 12 years. MacBook Pro's, iPads, iPhones have been my choice for creative & music computing. However, Microsoft's Surface Book running Windows 10 could tempt me.

Being an Apple enthusiast and an Apple Logic Pro certified trainer, it’s not often you’ll hear me singing the praises of a non-OS X computer or tablet for music production or live performance… but the Microsoft Surface Book has turned my head. Here are 8 reasons why.

Note: Thavius Beck has been testing out the Surface Book and you can find out more about him and his workflow in this video here:

#1 - A Flexible Laptop And Tablet

It works great as a laptop, but the detachable display turns it into a portable tablet… or alternatively, turn the screen around and you’ve got a sit down/stand up and use touchscreen canvas.

An iPad, as good as it is, after all is only ever going to be a tablet. Surface Book can be your serious studio production machine running full versions of Bitwig Studio, FL Studio, Reason, etc. But it can also be turned into a touchscreen for sketching out musical ideas, or as a mobile mixing desk, or a portable, throw-in-your-bag DJing surface.

Where Windows as an OS for musicians and producers often fell down in the past (compared to OS X) was the lack of stable audio and MIDI performance. Don’t get me wrong, my techie Windows-wielding friends were more than able to get things working well, but it took effort, time and know-how.

Windows 10 features a new MIDI API (for their desktop, tablet and phones) designed to reduce jitter. Good news when running a bunch of MIDI controllers or devices.

Microsoft want Windows 10 and their Surface Book to be the hub of your music production studio.

Aside from the ability to dedicate all audio processing to one core of your PC (which is really great in itself), there’s the promise of lower latency. Every recording musician knows this means improved audio performance when tracking instruments. Generally, the lower the latency the easier and more enjoyable it is to record to your Windows 10 music apps.

Microsoft have also revealed they’re looking into support for Thunderbolt 3 (think even lower latency audio interfaces) and audio aggregation (Apple already offer being able to create aggregate audio devices in OS X, but not on iOS yet).

In laptop mode, Surface Book packs an Intel i5 or i7 and up to 16 GB RAM, with similar specs to a MacBook Pro. There’s no compromising with mobile/tablet processors here. Admittedly, iPads don’t suffer from processor issues, but for more processor intensive DAWs, the Surface Book seems an obvious choice.

While useful for non-musicians too, iPad is somewhat limited by the onboard storage of between 16–128 GB. Surface Book storage starts from 128 GB and goes all the way up to 1 TB! No more syncing to iTunes or the Cloud to free up space every day or two…

Plus being a Windows 10 machine you can access your files easily. For me personally, iTunes syncing to access files is a creativity killer and I wish Apple would give me an easier way to access files without the hand holding.

The title says it all. While you may not want to be reaching for a touching the screen all the time, having the option of quickly editing something on screen with your fingers but also having quick access to the keyboard and trackpad (which does't feel like an afterthought) is something iPad doesn’t allow for as easily.

Multi-touch is supported in Bitwig Studio 1.3 on Surface Book.

We all know about the limitations with iPad connectivity via a Lightning port. I’m a fan of the iPad being as thin as possible, but it can be inconvenient and costly when you want to connect a simple USB controller but don’t have the correct converter or forgot/lost it. Suddenly you don’t feel so mobile anymore!

Surface Book has two normal sized USB 3.0 ports, and SD card reader, headset out, and a Mini DisplayPort. There’s also been rumors of support for Thunderbolt 3 and USB-C, so the future looks bright in terms of connectivity.

Bitwig, Avid and StaffPad are all putting support into Windows 10 and the Surface Book, and with good reason. Bitwig Studio 1.3 adds functions to take advantage of the Surface Book with features such as Touch Controls, Touch Keyboard (yes, you play a musical keyboard on the screen), a specially designed “Radial Menu”, and more. 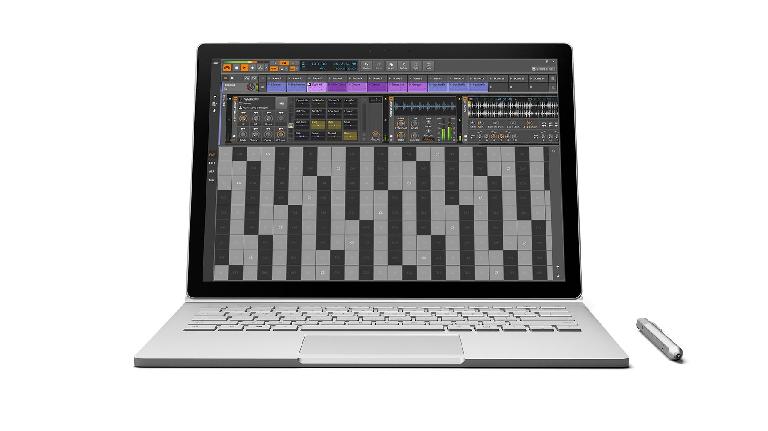 StaffPad looks to provide an intuitive way to create and edit music notation on Surface machines, and Avid’s Sibelius has new touch controls with support for the Surface Pen too. 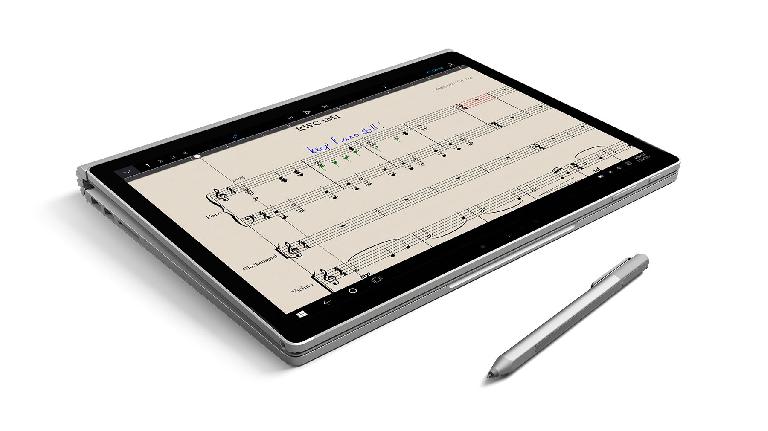 And there’ll be more coming too. It’s good news to see music app developers looking to support a platform outside the Apple ecosystem. Surely more will follow!

Microsoft appear to be keen to capture the hearts and minds of music makers. Aside from this being a marketing drive, it shows they care about this segment of the creative demographic. No longer are they only concerned about the next Office update for business users, they’ve been putting a lot of time and energy into improving features in Windows 10 for music makers and now creating a Surface Book which would render the need for a separate tablet as pointless…

Surface Book looks as at home for live performance as it does in the studio.

Am I going to rush out and buy a Microsoft Surface Book? Not yet. I’m currently happy enough with my 2015 MacBook Pro running Logic Pro X and other music software. I’m happy enough with OS X El Capitan. I’m also satisfied with the growing number of excellent music making apps for iPad and my Mac-only music software options, especially now that FL Studio is coming out for OS X soon.

There's the obvious disparity between comparing a machine that can run a full laptop OS and therefore run powerful DAWs against a dedicated tablet which isn't designed to do this. However, if I was looking to buy a new machine now for my studio, then the Microsoft Surface Book would definitely be a serious contender, when nothing used to come close before. And without a doubt I'd recommend pausing before buying a fully spec'd out iPad and taking a look at what Surface Book running Windows 10 could offer as an alternative.

About Thavius Beck on the Microsoft Surface Blog

I have a Surface Pro 3, which I've used a lot for music projects and live performances. I also have a more powerful but aging home studio computer and I'm planning on upgrading that to a Surface Book 2.

My employer provides me with a MacBook Pro for my office and I teach in an iMac lab. I am happy enough with MacOS when I need to use it at work, but, man, having multi-touch and pen options on the Surface Pro has been pretty wonderful, and I'm excited that I'll have those tools in my home studio soon too.

I own an iPad Pro and like it a lot, but, as you say, it doesn't come close to replacing a lot of pretty important software tools that musicians use.

Thanks for a thoughtful article!