Language
Steinberg Cubase 8 has all the tools you need to get the perfect arrangement. Hollin Jones shows you how with these eight excellent tips.

This is the big one. Cubase has an Arranger Track (only one per project) that lets you play back your timeline in non-linear fashion. Add one from the Project > Add Track menu and you can define areas of the project as blocks of arranger data. In the Arranger window, sequence these blocks by dragging from the list of available blocks into the chain area and then entering a number of repeats. Press Play in this window to play back using this sequence rather than the sequence of events that's on the main timeline. Creating multiple Arranger chains lets you try out different arrangements without having to edit the data in the main sequencer in any way—an amazing timesaver. 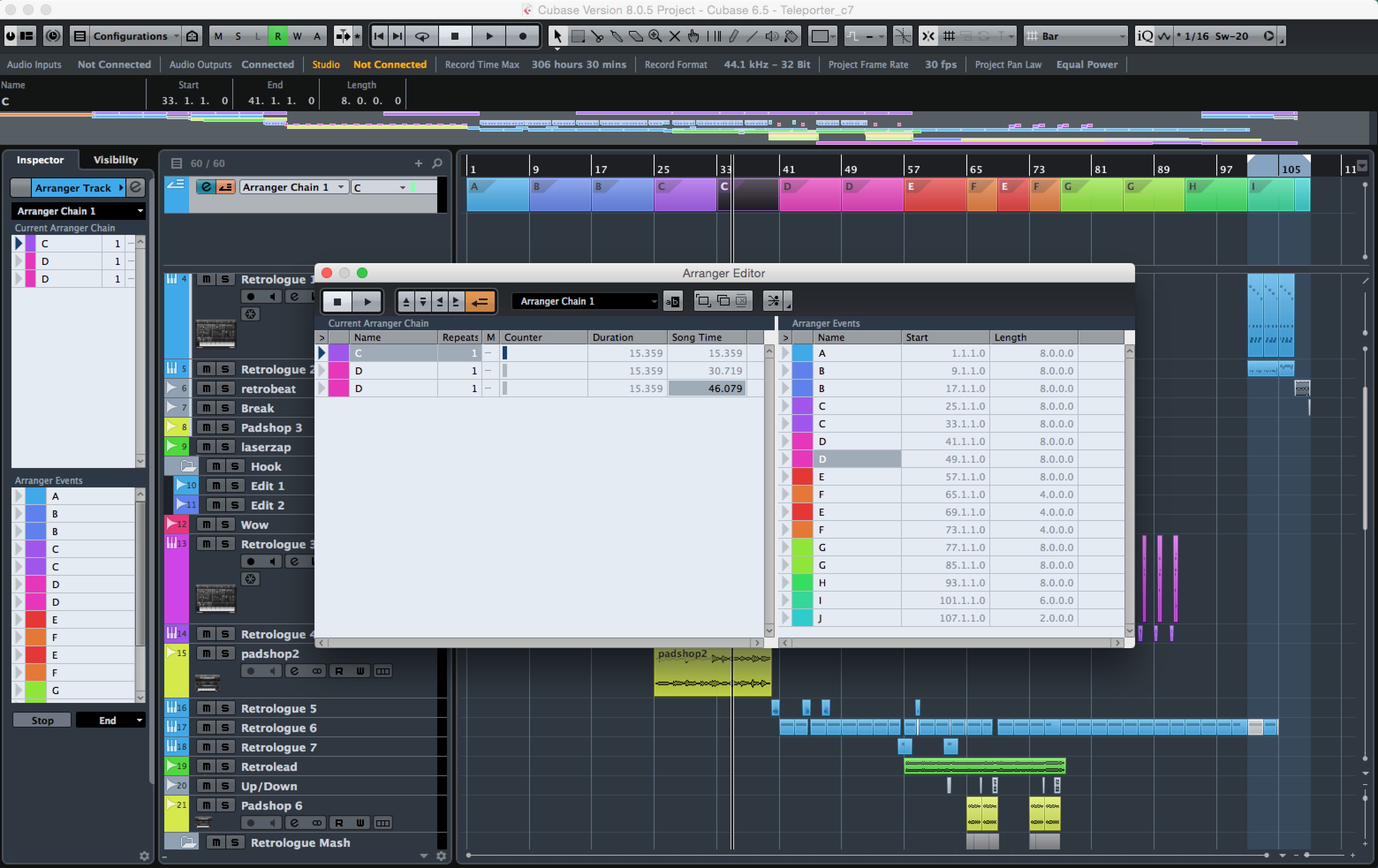 By right-clicking on any MIDI or audio clip or multiple clips inside a project you can choose to render them in place, complete with settings to choose whether you want to create separate events and what audio format you want. This is especially useful with audio clips, which Cubase treats as shared by default. Imagine you have a clip you want to use twice but the second version you want to perform a normalization, fade or other edit on. To stop Cubase making that edit to every instance of the clip, use the render option and create a new version without having to export and re-import it first. MIDI clips can be edited independently of one another but this is still a good trick for performing audio processing functions on them, which is impossible until they have been rendered to audio. 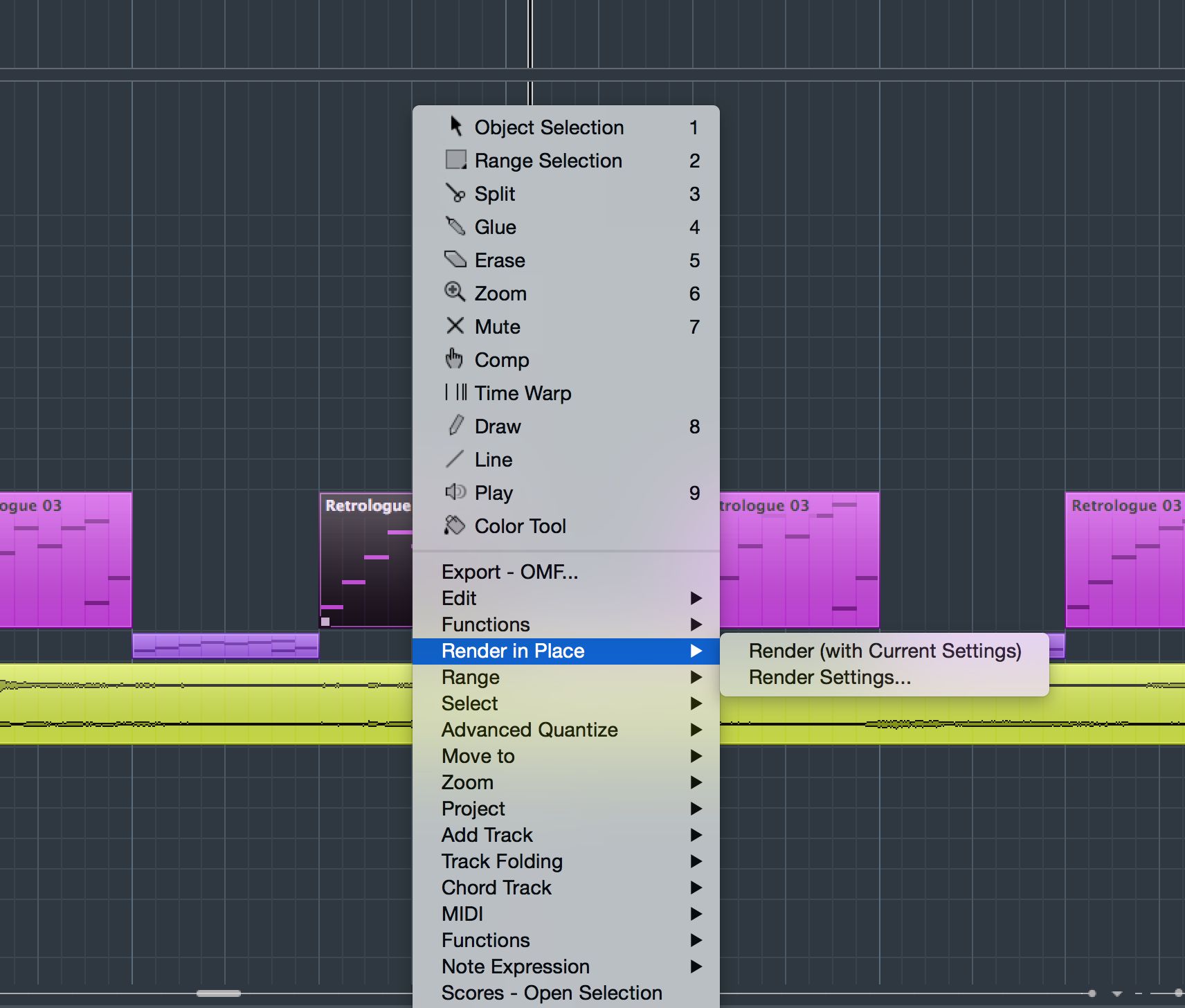 3 - Quickly create multiple projects out of your arrangements

There are many reasons to create alternative arrangements: shorter radio edits, full-length album versions, taking out an instance of the chorus and so on. Doing this manually can be massively time consuming, but there is a way around it. Use the Arranger Track to create different arrangements as described above, then use the Flatten button in the Arranger window. This gives you various options as to what to do with the resulting arrangements. You can render the current chain down into the existing project, replacing what's there already. You can render the entire arrangement out to a completely new project, choose to make copies of the shared files and even cascade those projects when they have been created. So with a couple of clicks you get several completely new and independent Cubase project files with independent audio files for each version of your arrangement. 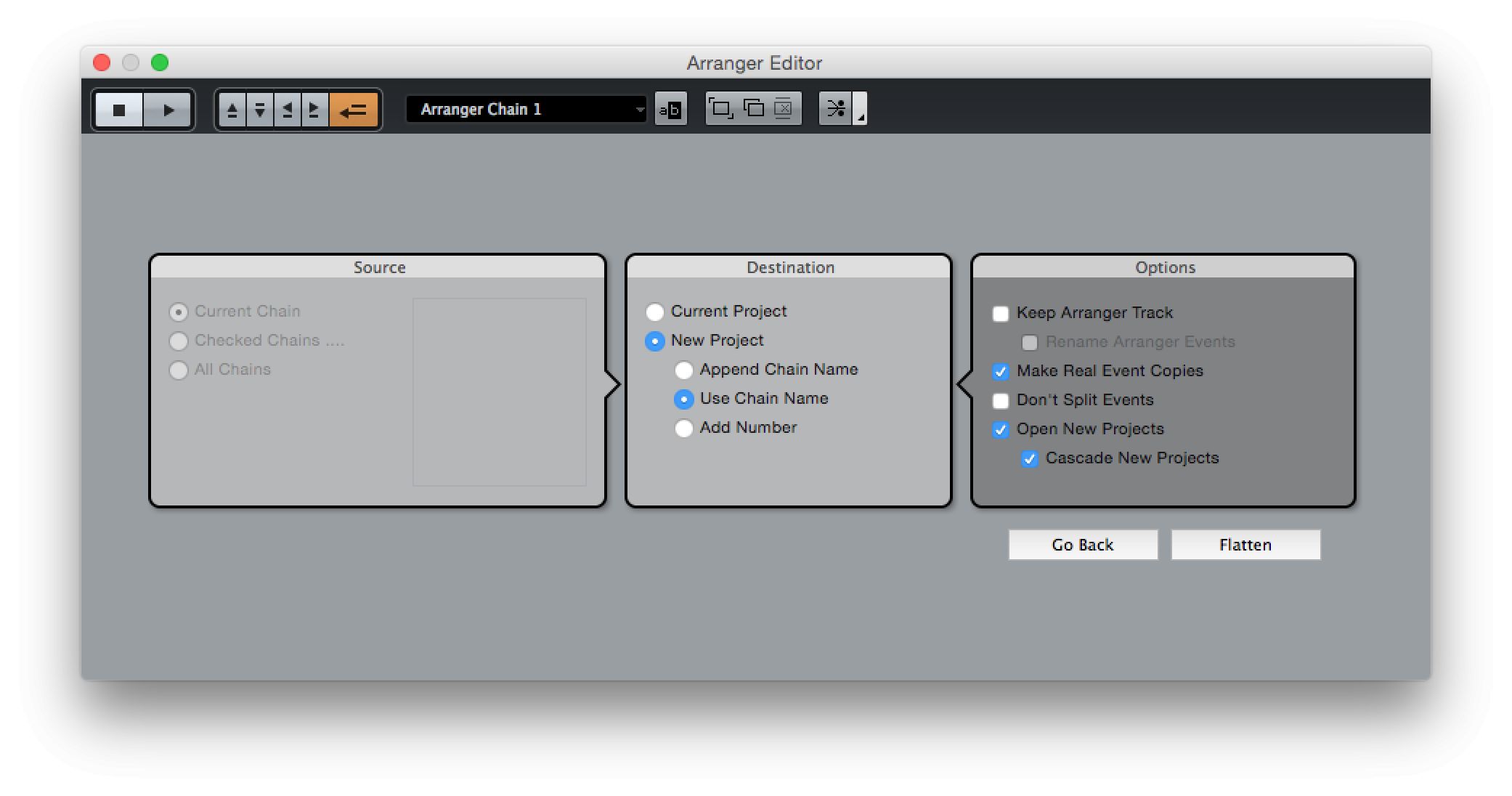 If you set the left and right locators and activate looping, an area turns blue and you can play it over and over. However you may not know that if you drag the right marker leftwards or the right over the left and cross them over, the selection turns red and this area will now be skipped during playback. So you can quickly make a track ignore a section of a project as it plays back, handy for example for skipping a verse or a breakdown to see how it affects the flow of the song. 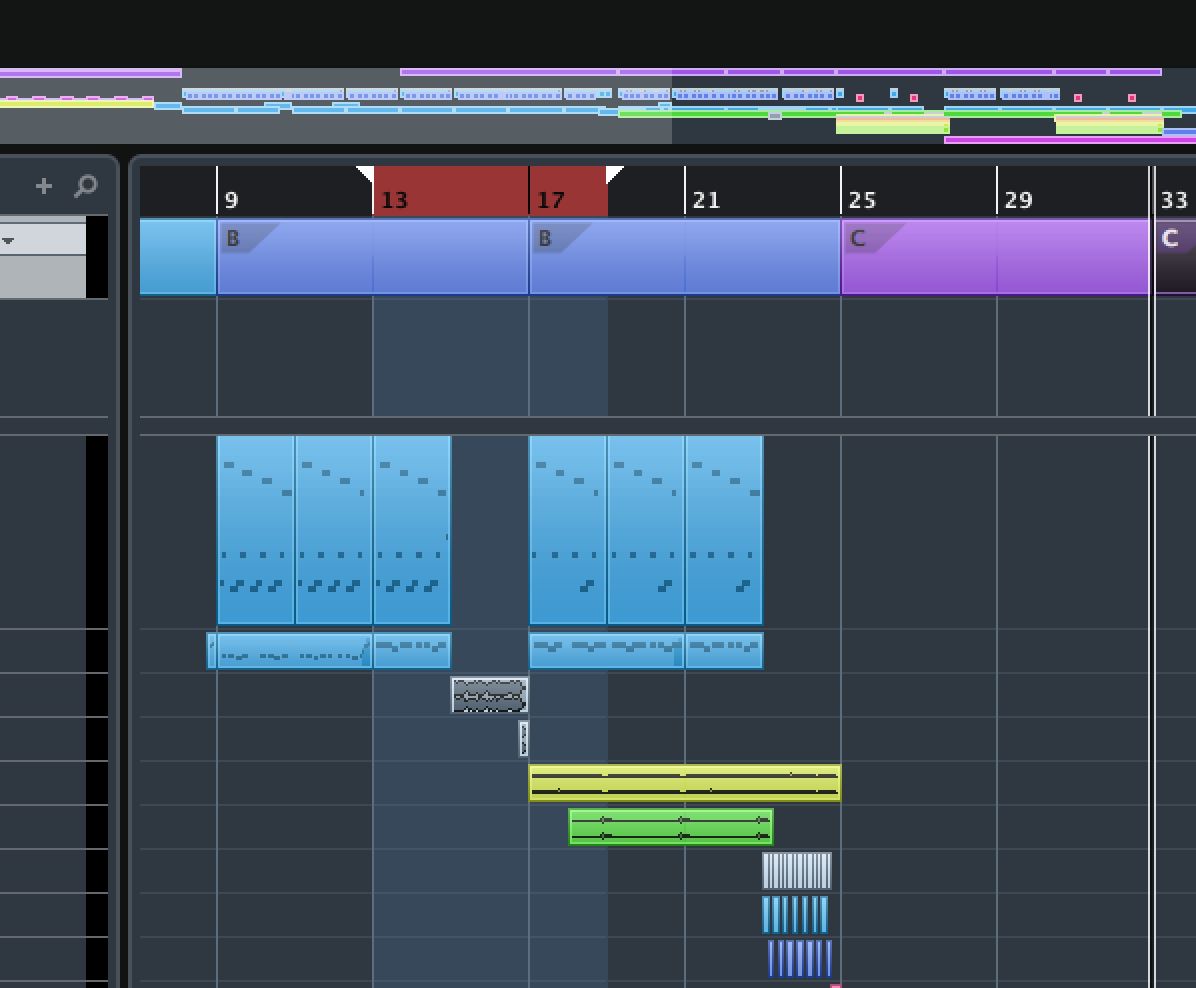 Markers are really useful for navigating. Imagine you have several parts of a track on a timeline but they're not yet connected up into a song and you want to work on them before bringing them together. By adding and naming markers you can quickly jump around the timeline and work on different sections without lots of tedious zooming. Even if your track has a more coherent shape you can add markers to see at a glance what happens where and make decisions such as whether a section seems to go on too long, whether there are too few bars in the verse and so on.

6 - Harness the power of Track Versions

Cubase 8 has something called Track Versions that are incredibly useful for arranging. Any track containing MIDI or audio can have multiple versions created and you can toggle between these with a single click. The idea is that you can make edits to tracks, try different things and generally experiment with things in the sequencer without having to create any new tracks and while maintaining the same single channel in the mixer. So you could for example play five different variations on a MIDI part on five track versions but only one MIDI track would appear in the sequencer. You can also create lanes from versions or versions from lanes so it's possible to 'explode' any part out into its own sequencer channel to perform further actions on it. 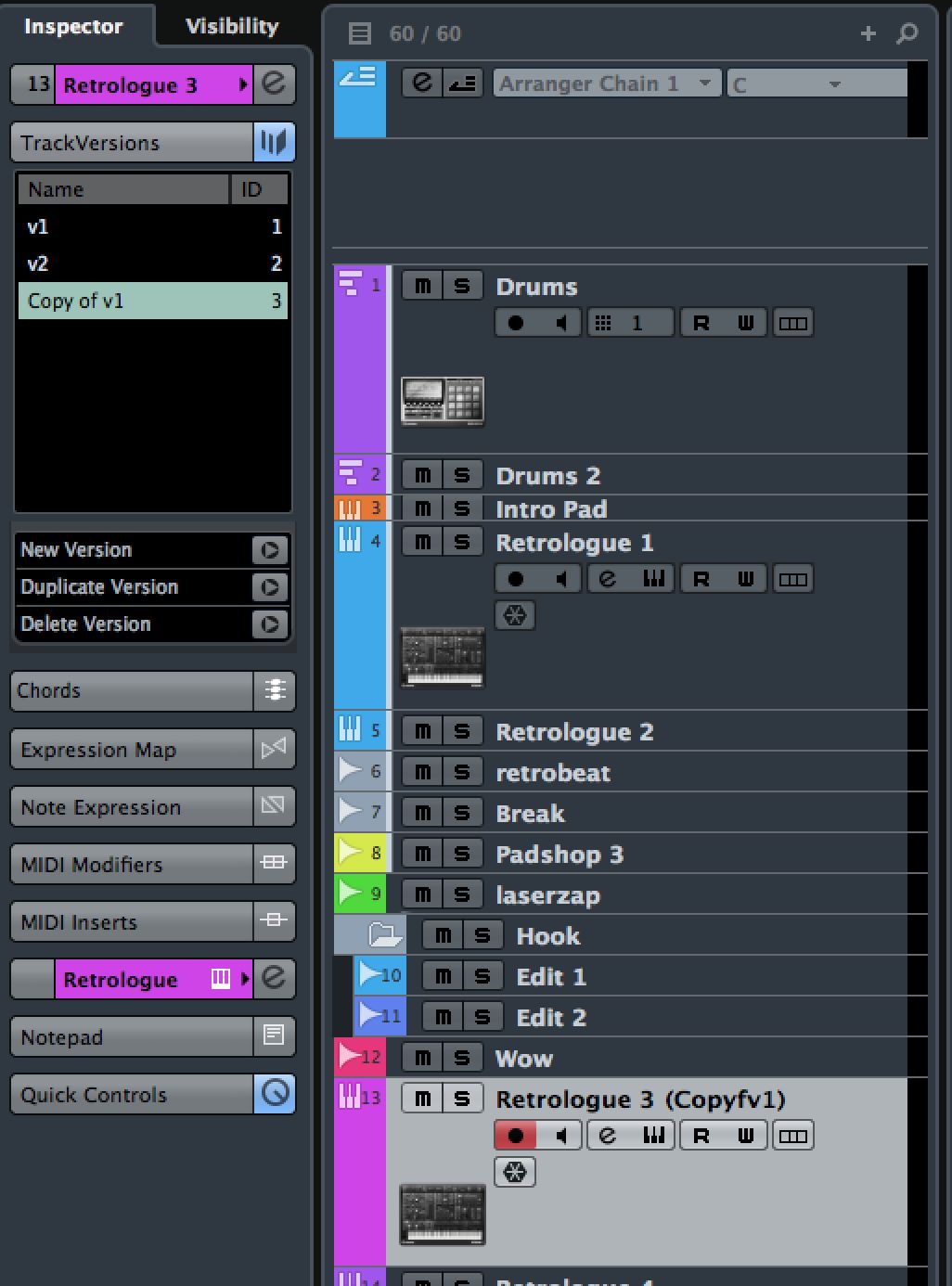 Folder Tracks might sound dull—a folder into which you place other tracks—but they're really useful. As well as letting you group a bunch of sequencer tracks together to help manage larger projects, it's possible to perform actions on a folder track that affect all compatible tracks stored within it. So they can all be muted or soloed en masse, all monitor or record enabled, and where they are all part of the same take as in the case of multitrack drums, they can be group edited as well. Folder Tracks can really help to simplify large, complex arrangements. If you have an active Arranger Track and some defined blocks, click on the Arranger Track and go to its Inspector panel. At the bottom you will see a list of the events available to you and by clicking on the arrow next to any one, you can trigger it live. This turns Cubase into a sort of loop playback tool and lets you play it almost like Ableton Live clips, independently of whatever the arrangement in the sequencer currently is. The box at the bottom right lets you choose how long a section will play back for before moving to the next selected event. You can choose to have it jump immediately, after a set number of beats or bars. This helps you to perform live with loops without worrying about going out of time.