Language
Logic Pro X 10.1 has been out for a few weeks, but there's new features many Logicians may not be fully aware of. Joe Albano takes you through his top 7 improvements and explains how they work.

Even a cursory glance at the release notes for Logic 10.1 makes it clear that this was a major update, with many significant new features, as well as fixes for a host of issues. But besides the shiny new toys like Drum Machine Designer, Region-based Automation, and the new Plug-In Manager, 10.1 also contains a large collection of smaller workflow enhancements, and while each one may offer a minor improvement, together they can add up to a significantly more efficient work experience. In this article, I'm going to point up, in no particular order, 7 of these enhancements—ones I think are cool, or that I think I'll personally find especially useful.

For the musical styles I generally work in, I usually prefer to avoid Quantization, going for a more natural, more human feel. But when I'm having a bad timing day, and do need a little help tightening up a part (especially a drum part tapped in from the keyboard), I turn to Logic's Quantize options—most often the one in the Region Inspector. When I do quantize, I've always tried to minimize the loss of musical “feel”, by applying a partial quantize—reducing Quantize “Strength” in the extended parameters to 50% or less, which tightens up timing without making it perfect. But I still usually have to go in by hand and selectively fix sections that get over-quantized—almost always drum flams, which are tightened up too much, and often fills, which tend to lose their natural “push”.

Now there's a new alternative to that approach, called Smart Quantize. It's tucked away in the Region Inspector—a click on the word Quantize brings up a mini-menu where you can switch from the traditional Quantize algorithm (the default) to the new “Smart” algorithm. 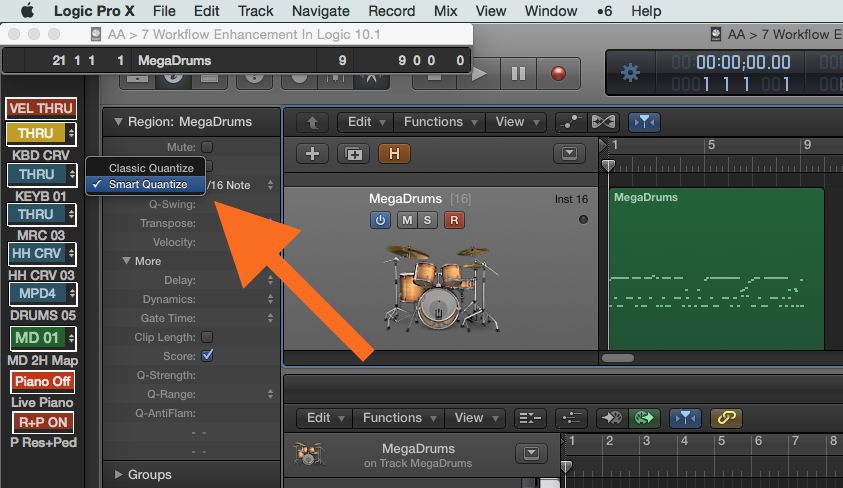 Smart Quantize looks at the notes in context of their musical timing/phrasing, and tries to preserve as much of the musical feel—the desirable deviations from grid-based perfection—as it can, while still tightening up the performance as needed. This means that, like a partial quantization, it doesn't move all the notes all the way to the gridlines, but allows some of them to remain a little off the grid, when needed, to preserve the musicality of the performance.

In practice, I find that this seems to work much better than the older partial quantize option (at least with my finger-drumming). With a typical hand-played drum sequence, as long as my timing isn't too far off the click, flams are consistently preserved (hooray!), and fills tighten up nicely without losing that slight push that makes them sound natural.

Of course, your mileage may vary, but Smart Quantize certainly has something new to offer, and is definitely worth a look if you ever need to auto-correct a performance.

The next couple of enhancements are to the Piano Roll editor..

On the same theme, one of the most difficult things to do with a MIDI part is to fix up the timing of a phrase which is rushing or dragging a bit—the timing between the notes is correct, but the phrase finishes too soon, or too late. A good example would be a drum fill. Drummers naturally tend to rush these a bit, landing on the next downbeat a little early, and then subtly shifting back to the metronome grid. But if a MIDI performance is say, rushed too much, it's hard to fix without either losing the timing between the notes of the fill, or making the subtle shift back to the click too obvious.

Another example might be a part where the player periodically gets off the click, then clumsily shifts back to it, and his deviations from the gridlines are far enough off that quantizing moves them to the wrong sub-beats.

Enter Time Handles, which is enabled from the Functions submenu in the Piano Roll Editor. This excellent new feature lets you select a group of notes, like a fill as described above, and stretch or squeeze them as a unit, preserving the internal, musical timing, but positioning the start and end points of the phrase on or close enough to the gridlines to make it work in context of the previous and following phrases. 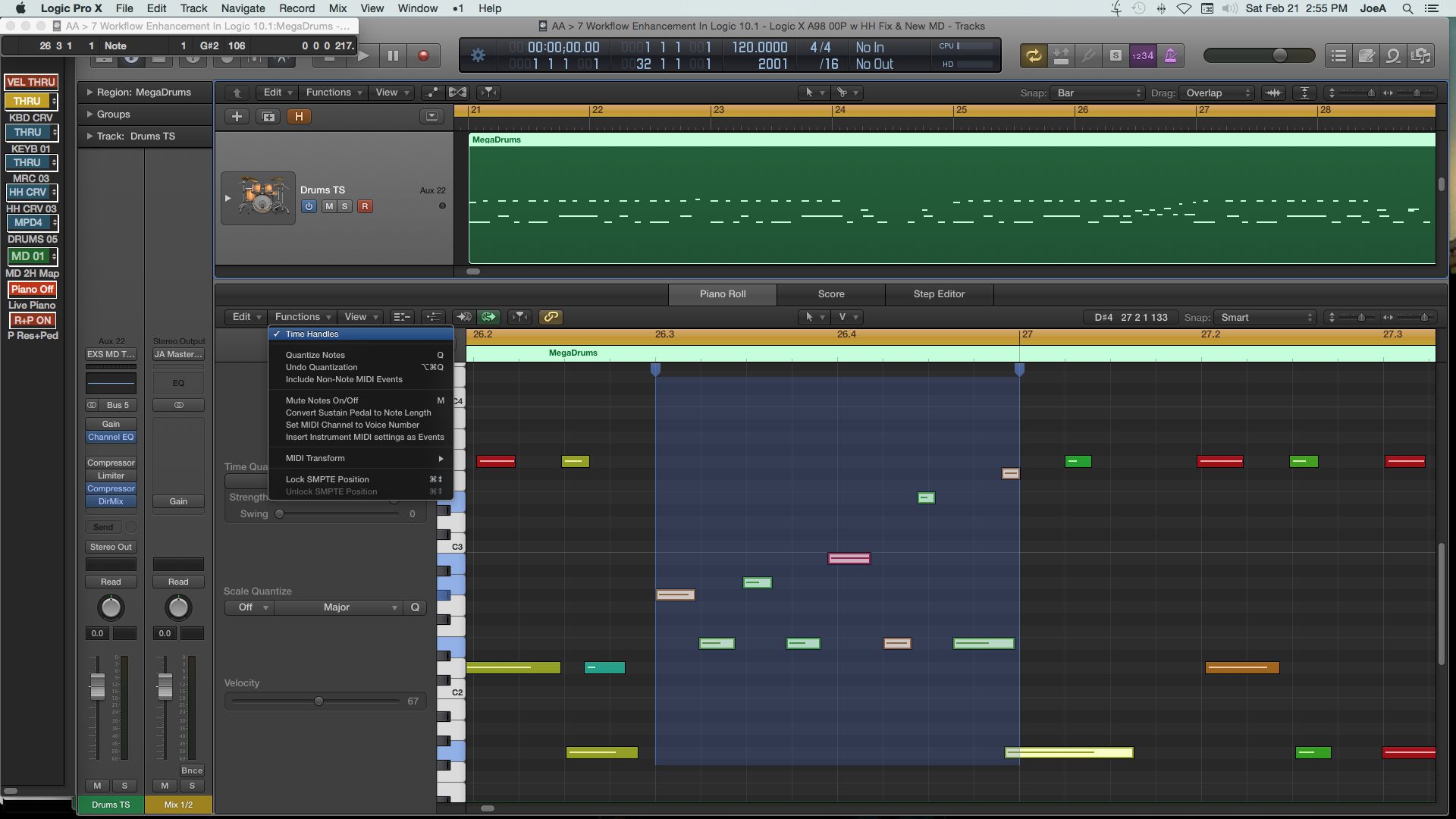 Of course, this was always something you could do to an entire region, by Option-dragging with the trim tool, but now it can be done with better visual feedback, and, most importantly, without having to cut up the performance into smaller regions. I predict this will be an especially useful tool for many people!

Logic has always gotten complaints for not having a dedicated drum editor window, like many programs. Well, Drum Machine Designer addresses this, but even the regular Piano Roll has a new option that offers this kind of display. Collapse mode is enabled by a button in the Piano Roll header, and it displays only those pitches that actually have notes in the current MIDI region, offering a more convenient drum-editor-style view (although it can be used for any kind of musical part). 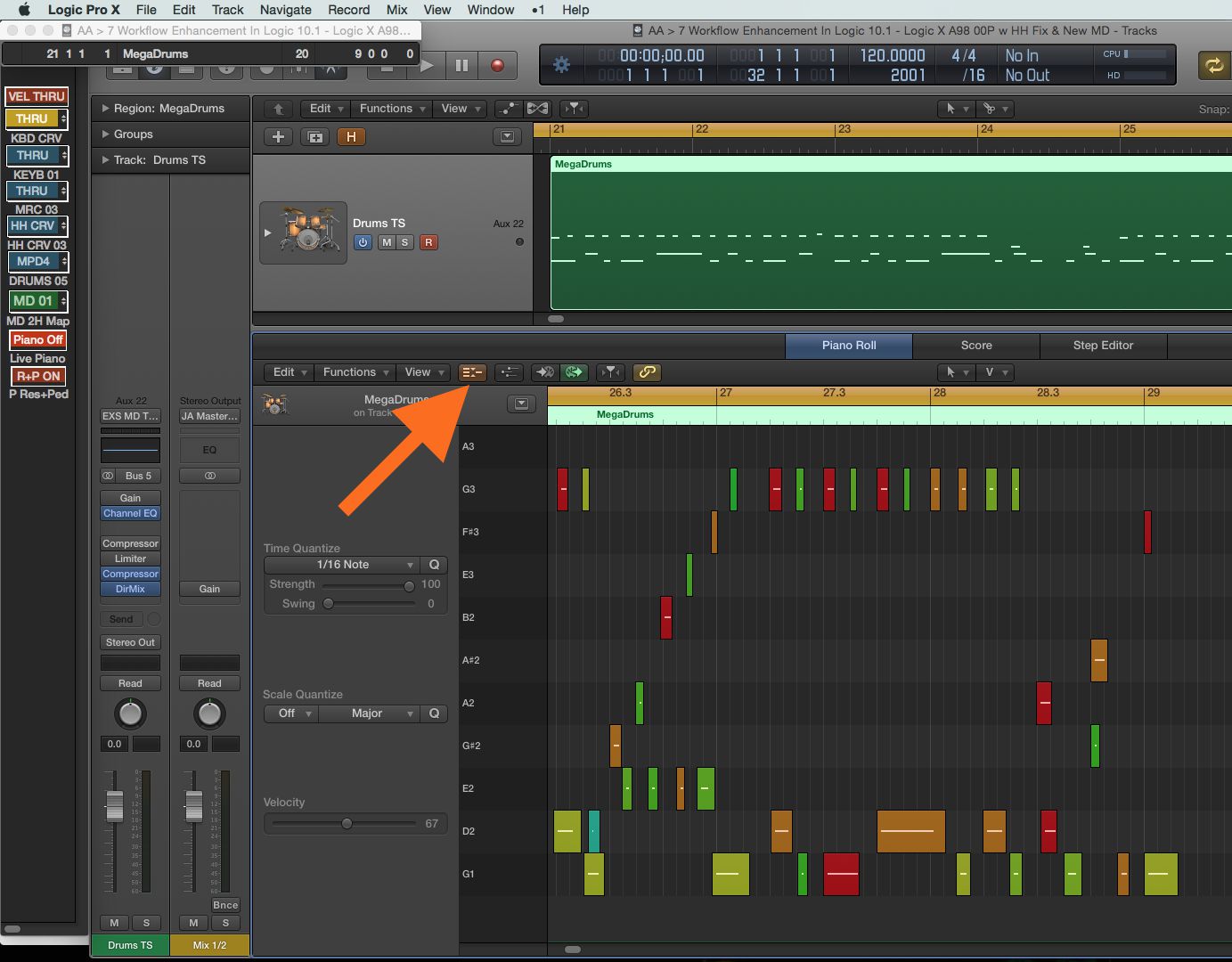 And this works in conjunction with the next feature...

4. Drum Names in the Piano Roll

When certain appropriate instruments are used for drums—Drummer, EXS24, Ultrabeat—the Piano Roll editor can now display the name of each drum. This, along with the Collapse view, provides a drum-style editing display that should satisfy most people who have always longed for that option in Logic. 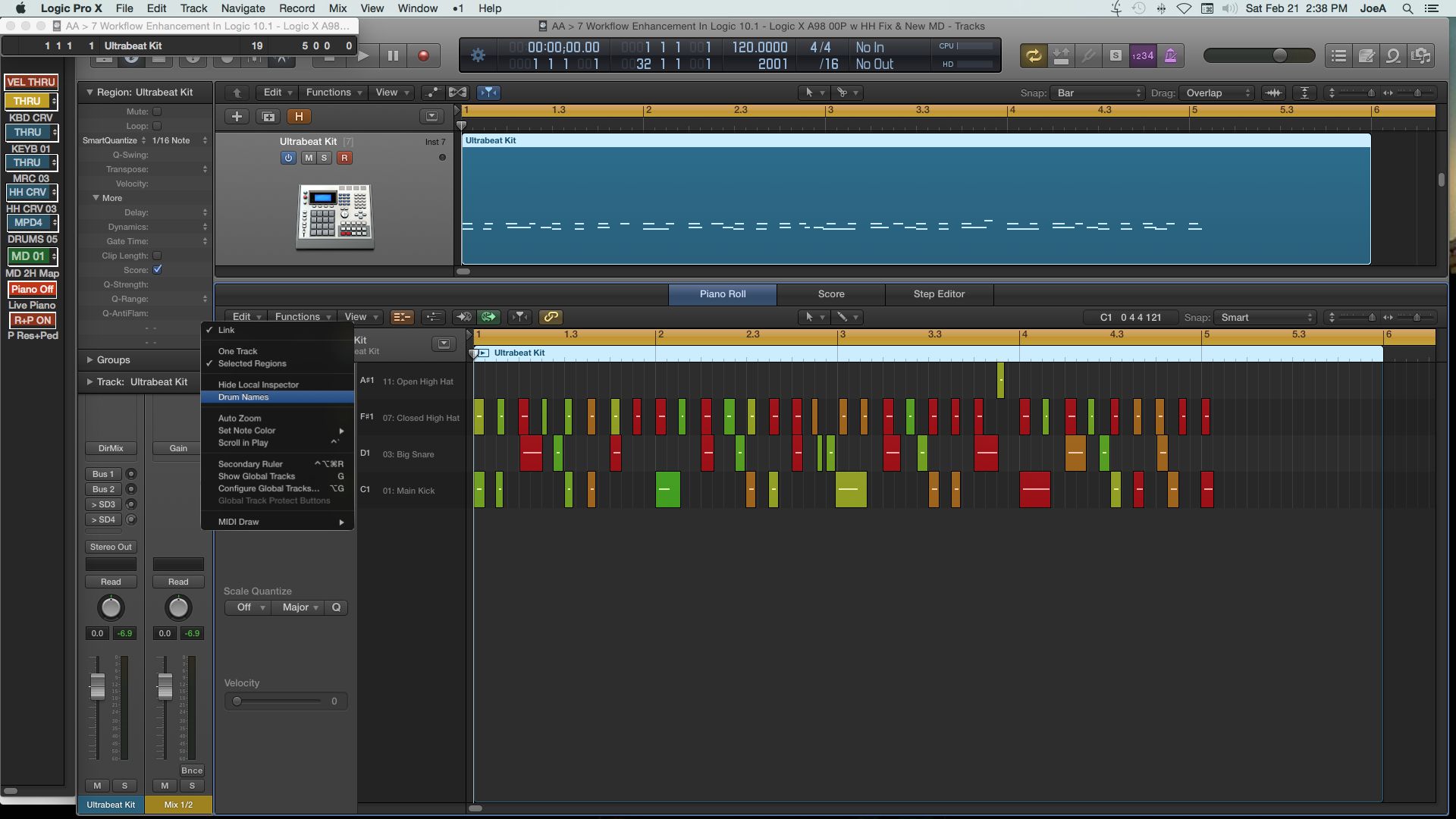 5. Independent disclosure for Track Stacks in Main display and Mixer

Back in the main Logic window, it's now possible to choose to display the component tracks in a Track Stack independently in the Main (Tracks) window, and the Mixer. Previously, the display was linked, so if you wanted to view all the individual Track Stack tracks in the mixer pane, you were stuck with a long list of tracks in the main view as well, which may have served no purpose there, especially with all regions on the Track Stack master track (as with Summing Stacks). Well, now it's possible to hide everything but the Track Stack master in the Main Tracks view, but still have the individual tracks visible and ready to be accessed for mixing down below. You just de-select “Follow Track Stacks” in the Mixer View sub-menu, and set the Track Stack view for each area as desired—another small improvement, but especially useful on smaller screens with limited vertical real estate (laptops). 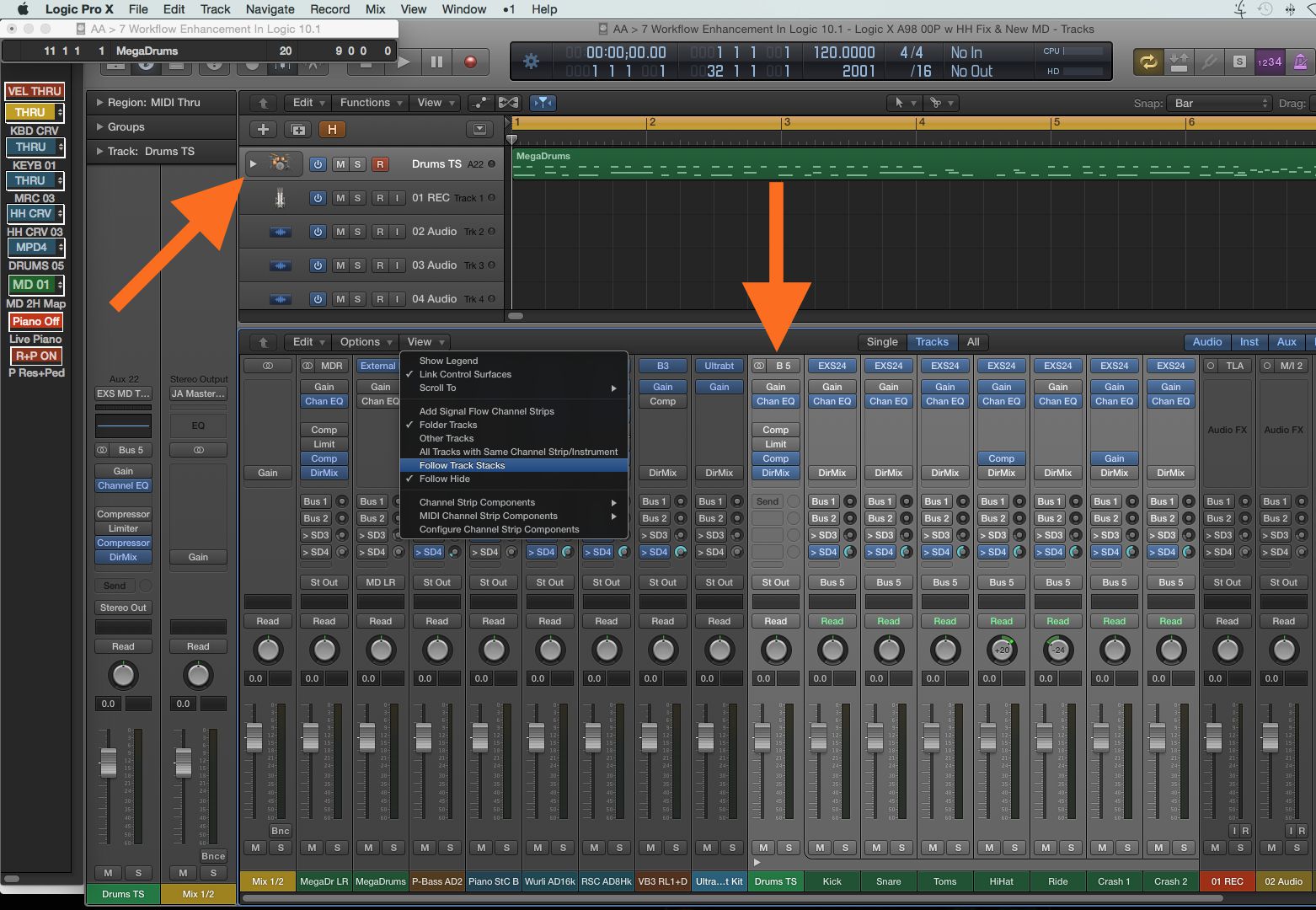 This is more of an under-the-hood improvement, but it addresses a number of issues. Fades in a Project were always stored in separate files, which tended to clutter up the Project Folder. Sometimes, one would become corrupted, causing playback issues, until it was deleted, forcing Logic to re-create a fresh one. Well, you can say goodbye to all that, Logic now generates Fades in real time, eliminating the separate files and their occasional problems.

But most importantly, real-time Fades means that you can now have fades on tracks that are being flexed with Flex Pitch, which wasn't possible previously. This can be a significant improvement, potentially eliminating clicks and pops when Flexing, which some people had found to be an issue at times.

Often, in a mix, you might find yourself Soloing several tracks to work on, and then wanting to hear them in context of the overall mix, going back and forth between hearing the tracks soloed and against the full mix. Previously, to do this repeatedly meant that you had to either select all the Channel Strips to be soloed, or Group them, so you could toggle them as a set—now there's a third option. There's a new Solo toggle (Kill/Recall) button, in the header in the Main window. 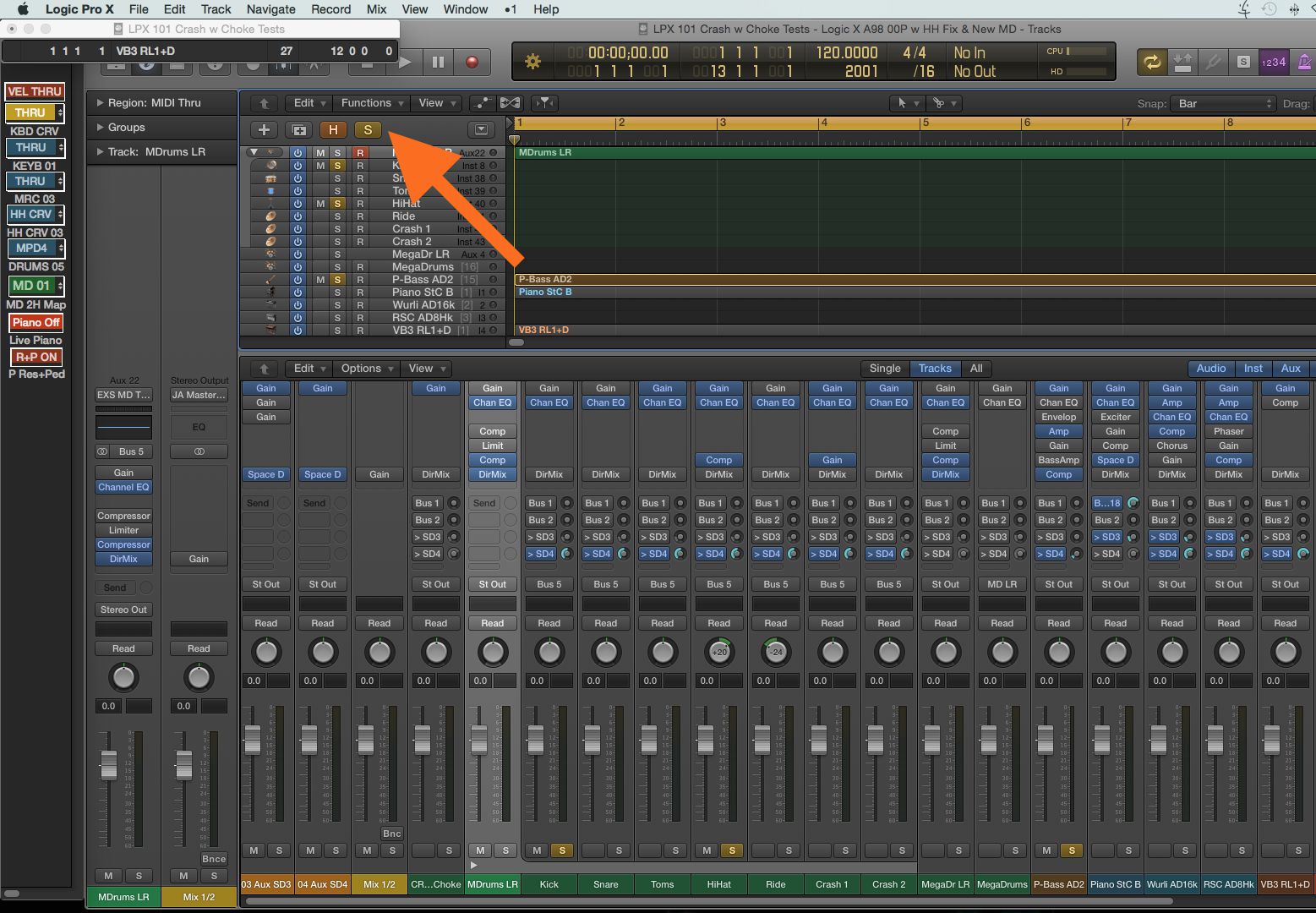 Clicking this will un-solo all soloed tracks, but clicking it again will re-solo them, as a unit, without any need for Channel Strip selections or Groups. Again, this is a minor convenience, but one that I know I'll find particularly helpful, at least for my workflow.

And that's it for now. There are so many more little tweaks in Logic 10.1, it would be a good idea to get in there and poke around—you may discover that one little enhancement that just makes your day!